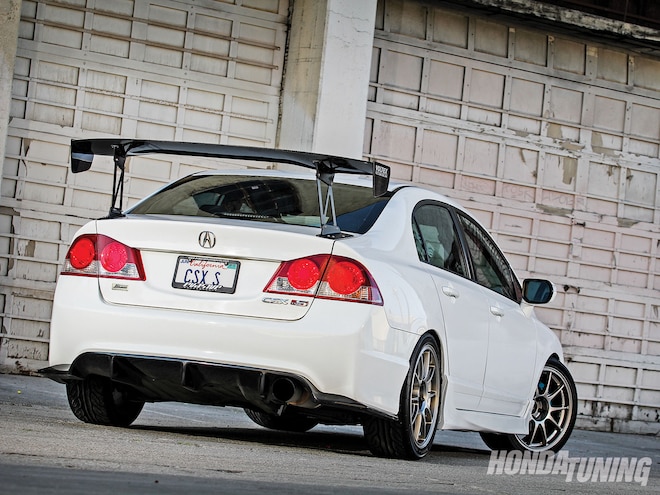 Rumors and misconceptions, especially in the Internet age, tend to result in spreading far too much incorrect information. When it comes to cars, many times an owner and build are presented in the wrong light because people are quick to make assumptions based solely on what they see. So before we officially begin our tale today, let us immediately dispel all speculations about the vehicle you see here; this J's Racing-equipped Honda is not an FA5 Civic converted to JDM FD2 specifications. It's actually not even a Civic at all--sort of. Just based on the nomenclature alone, it's not even a Honda. From the same family, yes, but for those who aren't in the know, the "Civic" that you're staring at is actually an Acura CSX. Much like the Acura EL, it is the slightly more sophisticated, more luxurious Canadian cousin of the Honda Civic. The EL was first introduced to our Canadian neighbors because the Integra sedan was never made available to them. Instead, they received the EL, which was essentially a Civic with better features. The CSX was a replacement for the EL, both of which shared their availability in the Canadian markets.

Pradana Wilianto, better known as "Ping" or "Ping Ping" to his friends, acquired his CSX, a Type S model, during his stay in Vancouver back in 2007. He was an international student from Indonesia who was studying abroad. "I've always been a huge fan of Japanese sports cars, especially anything Type R from Honda," Ping explains. "The moment the FD2 Civic Type R came out, I couldn't stop thinking about it--I wanted one so bad. In '07, there was no Si sedan in Canada, so I was left with either the FG2 Civic Si coupe or the CSX Type S. I picked the CSX because it already had the FD-chassis headlights and taillights. All I needed to do to convert it to FD2 specs was to get the bumpers, sides, and rear spoiler. Performance-wise, it was as close to a Type R as I could get with the K20Z3. With some minor adjustments, I could have a North American Civic Type R." 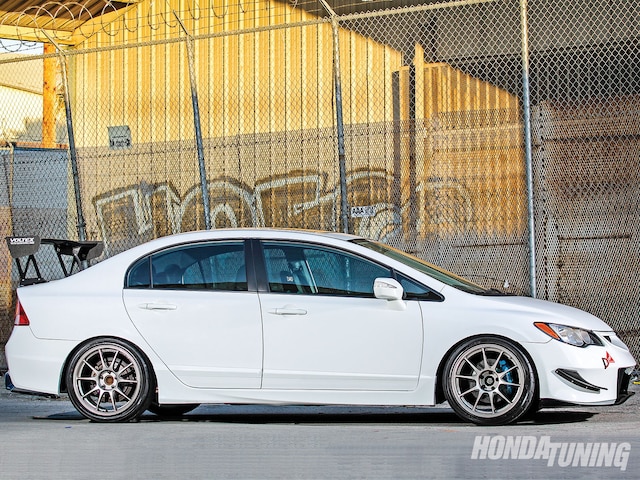 Pradana made the decision to continue his studies in California and brought his CSX with him in 2009. He made the 16-hour drive solo and convinced the state of California to allow his CSX to stay because it was transportation for a student looking to achieve an MBA. Like most Americans, they probably didn't know what a CSX Type S was anyway, so they had no problem with the car. Whoever signed off the paperwork for it might think otherwise if they saw the car now. Ping adds, "Because of the front and rear of the CSX, people in California suspected that my car was a JDM-converted Civic Si. It wasn't until they looked in the interior and saw the badging that they realized that it was an Acura. The actual FD2 'look' and conversion is quite popular now, but back when I first moved here, I was one of the first," Ping says.

"I wanted to build a car that was comfortable for everyday driving, being that it was my daily at the time, but I still wanted it to be very capable on the track. One day, I met the guys from Evasive Motorsports, and I started ordering my parts through them. They had the fastest FA5 Civic Si in America then, so I trusted them with their advice and help. My goal was to build my CSX as close to the Evasive Civic as I could. With the type of success they had with their car, I knew I couldn't go wrong. Doing so would also help me to see how good of a driver I was compared to them because our builds were very similar. I constantly had a benchmark of where I wanted to be on the track because they were running such phenomenal times with their Civic."

The only major differences between the two at that time, besides their namesake, were that the Evasive Si, with the help of Honda Tuning Magazine, had upgraded the cams and other bolt-on components and relied on different aero modifications. Wilianto opted not to touch the guts of his K20Z3 because there is still a possibility that he may get rid of the car after he finishes school. Aesthetically, the Evasive Civic wore aero from Max Racing, and Ping went another route with restyling via J's Racing. He'd noticed that FD2 conversions were getting more and more popular every year, so he purchased a J's Racing kit to set himself apart. After all, he didn't want to have any further confusion about his non-Civic.

Engine internals remain mostly untouched, but Wilianto's K20Z3 is a capable animal with valvetrain upgrades from Supertech and SVM 212 camshafts. A T1R carbon intake pulls cold air into the motor through a K&N filter while exhaust gases run through a Buddy Club header and out through a 63RS exhaust, also from T1R. Gearing has been refined with a 5.06 final drive from a Japanese FD2 Type R, and an Exedy Hyper Single clutch/flywheel combo provides durability on the track. TEIN Monoflex dampers keep the Canadian Type S planted firmly to the ground as sticky Advan Neova AD08 rubber drives Ping toward the coveted 2-minute mark at Buttonwillow.

Ping's CSX-S appears incredibly simple on the outside, and that was certainly his intent. It began as a daily driven vehicle that took him from Canada all the way down to California. He needed a reliable car to get him to school that he could also beat the hell out of at weekend track events. Nowadays, he's given the multifaceted CSX a bit of a break, driving it only every few weeks. He is on the verge of reaching his goal of breaking the 2-minute time barrier at Buttonwillow, and in 2012, he topped the Street FWD Class in the Super Lap Battle series. Misconceptions of this car will always be there, but whether or not it is a Civic or anything else becomes irrelevant; all you need to know is that it's a Honda that's piloted by a skilled driver who has yet to reach his maximum potential.

Favorite site
No time for the Internet

It's All A Little Confusing

In terms of overall styling, the CSX looks more like the Japanese Civic than it does the North American version. It shares the same visual cues as a non-R FD1 Civic, and the only identifiable change is the front grille, which bears the Acura insignia. The Type S CSX is basically a Canadian variation of the FA5 Civic Si. So to put it altogether, it is a Civic, but not a Civic, that shares the styling of its Japanese FD1 brethren, with the powerplant and suspension of a FA5 Civic Si. As such, the CSX's chassis classification is "FD5" (FD1 + FA5 = FD5). It may appear that the CSX is a rare bird to us Americans, but it was the best-selling vehicle in Canada's Acura lineup before it was replaced by the new ILX.