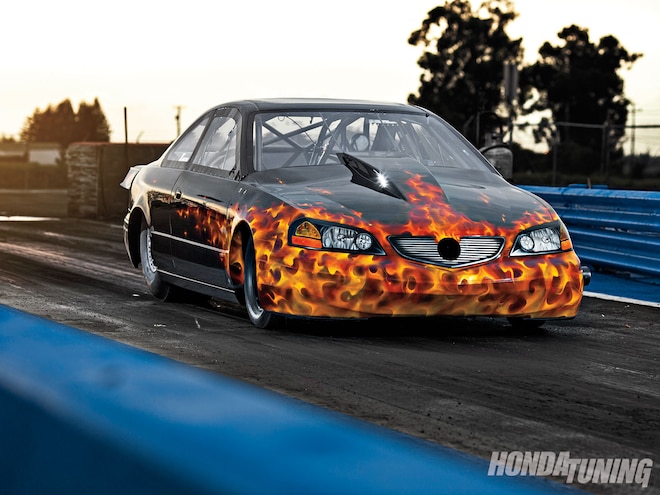 When you think of Acura's luxurious CL model, you probably can't imagine it embarrassing domestic muscle on the street. Even further from your vision of that V-6-powered, low-slung coupe is a rear-wheel-drive-converted, fully built turbo beast complete with 3/4 chassis and wheelie bars. Fortunately, there's no need to spend time conjuring up that fantasy, Thomas Richardson, owner of this 2001 Type-S, has already taken care of the visuals for you.

When we first laid eyes on the CL, it was positioned on the red carpet during Wek'Fest SF a few years ago. A closer look revealed some topnotch fab work, an amazing airbrush flame effect, and what most people would refer to as a "money pit." The wet look of the freshly painted black finish drew showgoers in, and the flat-black components under the hood baffled those looking for the requisite cold-air intake and reservoir sock covers that you'd come to expect from a car show. Furthermore, most had no idea what kind of car they were drooling over. At the end of the day, the sleek, one-off Acura took home Best Engineered and Best of Show accolades. Commendable, especially for a purpose-built race car, but ever since that day, we've kept tabs on the owner and his project in the hopes that we could finally capture the story. Well, here it is...

Richardson's automotive resume doesn't consist of a long list of Honda builds, and in fact, it's quite the opposite. Immersed in the domestic landscape for years, he's had his share of American muscle but grew bored of that scene. He explains, "My introduction to Sport Compact began at WPB Raceway when the NHRA Xplode series was in its heyday. I loved the Modified and ProRWD class, and upon watching the headliners stand toe-to-toe, I was hooked. I found it remarkable that small engines were putting out such high horsepower." So what sparked the idea of using an Acura CL chassis? Well, part of that came from Richardson's street sleeper, a '03 CL with a custom GT35 strapped to the factory J-series powerplant, and an affinity for pushing around domestic cars on the street. He adds, "I would pull along beside Vettes and the Mustang egomaniacs and tempt them. I only lost a few, and the ones I lost were not by much. Many I shut down with that car and people had no idea what it was. It was debadged with no markings other than one Acura emblem. I just thought it would be different to make a Modified car with the CL. The undertaking was expensive , unknown, and intimidating."

Rather than using his streetcar as the guinea pig, Richardson purchased a salvaged title '01 Type-S on eBay and went right to work stripping it down to a bare chassis. Selling the stock, unnecessary parts paid for the cars purchase price, and then some. Of course, the profit made from selling off extra parts was but a drop in the bucket in the grand scheme of things, especially when you consider the sheer number of man-hours dedicated to the custom fabrication.

The original J32 block was reworked, first with AEBS sleeves and then filled with CP pistons and MGP aluminum rods. The cylinder heads have been ported and flowed with a valve-size increase of 1 mm and a Euro cam upgrade backed by custom VTEC eliminator rockers and custom valvesprings and retainers that round out the top end. Heavy boost is provided by a Precision custom 4508r that shoves air through an Accufab 95mm throttle body and one-off manifold, while Tial products and an AMS 1000 oversee boost regulation.

While Richardson was hesitant about the engines ability in the beginning, he assures us that the J-series is making the necessary power, though he admits his ultra-conservative approach may have held back progression. He states, "I decided to build it with an automatic Powerglide. After all was put together and basically wasting a motor on the dyno, I made it down the track. The results were poor and my experience level and conservative approach just slowed me down. Chalk it up to lessons learned." Though Richardson sounds like his own worst critic, his personal best in the CL is an 8.03, a very respectable number for a vehicle that is based solely on trial and error, with no real history to learn from. After multiple gear changes and torque converter adjustments, the car seemed to run out of engine well before the end of the 1320. "After a year and a half of virtually spinning my tires and seeing an 18 percent loss in the drivetrain, I went for it and embarked on the Liberty five-speed install. What a chore that was." After countless micro-adjustments and plenty of patience, Richardson made his way down the track successfully. The learning curve involved with the Liberty unit is daunting, but a task that Richardson has dedicated himself to, and he notes that he's gained some serious insight on starting line procedure and clutches.

As this article is being written, the CL's engine is being freshened up for a new season of testing and if all goes right, competition. The previous management system, when paired with the Liberty transmission, wasn't up to the task at hand, so it was removed in order for James Lin Motorsports to install the new Motec system. When asked about the ultimate goals for the car, Richardson states, "My plans are to spend the rest of the year on the new management system and get some valuable seat time. I have plans later this year to set the car up for NHRA CCAT Comp Eliminator. To do so involves changing the turbo to two 58s and remaking the front end." So much for the conservative approach...

Photo 8/11   |
Though the power numbers are kept under wraps, it’s apparent that this turbo J32 is making some serious power 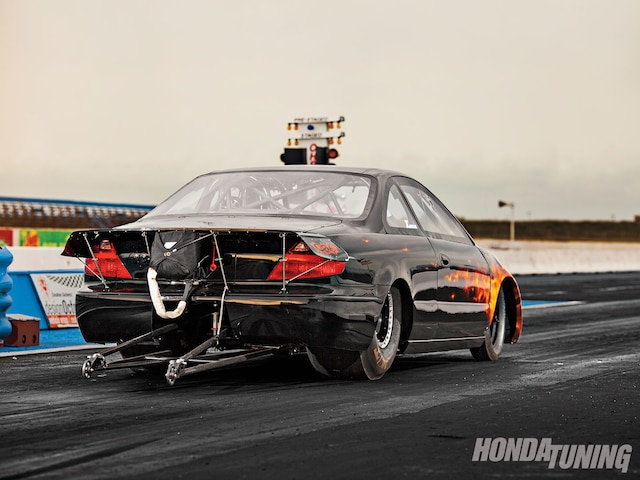 Honda Tuning
2021 Lexus LC Convertible: 6-Figure Price Tag But An Unforgettable Experience
With Lexus' LC Convertible finally hitting dealerships months after its reveal at the LAIAS, we were able to get our hands on 1 for a day to give you our two cents on it.
Sam Du – Aug 12, 2020

Honda Tuning
Saved by Senna - History and Facts About the Acura NSX
Whether you call it an Acura or a Honda, the NSX is a super-sports car for the ages.
Conner Golden – Aug 12, 2020