Sometimes it only takes one ride in a certain car to get you hooked; some might call it love at first sight.

For Jeff Lochkart, that car was a colleague's VW Jetta. "When I was in the Navy I had a buddy with a Mk4 Jetta and we'd occasionally carpool to the base. After several rides in his car I realized I had to have one. I just loved how it looked and the interior was really nice," Lockhart said.

Like love at first sight, a trip to the dealer can be filled with equally lustful feelings, and Lochkart was so eager to buy a Jetta he was unwilling to wait for his ideal specification. "I kind of wish I'd bought one with a manual transmission, but I didn't know how to drive stick at the time and didn't want to wait for one, so I got a silver Wolfsburg automatic that was on the lot. Years later, the automatic actually sets my car apart," he admitted.

You certainly wouldn't know it from the ultra-tidy result sitting here, but this 2003 Jetta 1.8T was Lockhart's first Volkswagen. "I'd never owned a VW until the Jetta, but my love for VWs has increased over the years as I went to shows, met friends in the scene and even opened our own shop, Janky Garage," he explained.

His obsession for perfection, with the right stance and ultimate poke started with the simplest of mods. "I added window tint and Eibach springs. And without any help or direction I slowly started adding mods until I stumbled into some other VW guys at shows. Before long, I understood what worked and what didn't," Lockhart said.

By now, you might get the feeling Jeff's a perfectionist. You'd be right. "While living on the ship [in the Navy] you have to clean twice daily or people get sick. It taught me about discipline and attention to detail - I apply it to the care and direction of my cars," he said.

Just how strict is he with the car? Well, let's say he washes the interior and exterior once a week, and there are plenty of rules before going for a ride: Like wiping your feet, not touching the dash and don't slam the doors. Can you blame him?

"I started to find my stride with the interior since I wanted it to be understated," he added. He set out to upgrade the interior to GLI status until the first parts he bought were actually from a 337-edition GTI. "I bought an e-brake boot sight unseen from a fellow VW guy and when it showed up, it wasn't the GLI piece he claimed. Instead it was from a 337," he said.

Of course, his affinity for the GLI saw its interior trim, headliner and pillar trim installed. And let's not forget the R32 steering wheel, which is almost mandatory on a car of this caliber.

Lockhart's favorite part is the ultra-rare OEM "Funk" button in place of the factory ASR button - it's the definition of rare and pricey. In case you're wondering, it was used in German police cars for their two-way communication and means "radio".

Since Lockhart was a Naval man, and was at sea for extended periods, friends would continue his work while he was deployed. But once on dry land, Jeff devoted every waking moment to the car, slowly taking the Jetta from lightly modded to full-bore.

On the outside, a Rieger body kit and GLI rear bumper landed on the Jetta, later replaced by a shaved Votex front bumper and side skirts plus Seidl three-bar grille. It also had a 1" boser hood extension and retrofitted HID projector headlights.

"Sean Wright did the HIDs with projectors and they look amazing. You'd swear they were OEM if you know they didn't come from the factory that way," he explained.

Lockhart's obsession with cleanliness led him to have everything smoothed and shaved. He applied the treatment to the GLI trunk, rear valance, spoiler, roof antenna, driver's keyhole, marker lights and other details that might not mean much individually, but create the overall design statement. A cursory glance would overlook the R32 wiper assembly, for example, or the relocated Wolfsburg logos and satin-black mirrors.

What you can't miss are the 17x9" and 17x10" BBS RS wheels dressed in Aviator Grey with waffle caps and polished lips, wrapped in stretched Falken rubber. Some of us consider these rolling perfection.

Although BBS RS are hard to beat, they need to be tucked inside a fender. "I decided to fit an Air Lift Super Slam kit with the V-2 management and custom brass hard lines from Janky Garage, along with a matching Air Lift five-gallon Fat tank," Lockhart explained.

Koni shocks handle the damping duties, while Neuspeed sway bars keep it flat in the turns. And plenty of stereo equipment keeps it rockin', with a Pioneer head unit, Focal mids, plus a JL Audio 10" W8 sub and matching amp mounted in a custom trunk enclosure. "While I was deployed my friends helped locate some rare 337 seat material to make a sub enclosure - I don't know how they found it, but it looks amazing," Lockhart said.

Speaking of amazing, you wouldn't believe how fast the automatic rips through the gears. That's because under the shaved and polished valve cover, intake manifold, throttle body, alternator and VF mounts are go-fast parts.

A Gonzo stage 2+ tune delivers 22psi, which is augmented by Eurojet and Samco turbo hoses along with a custom exhaust. Other under-hood additions include a hidden power steering reservoir, custom coil-pack bolt-downs and plenty of deleted emissions devices. "I thought about shaving the entire bay, but so many people do it that it looks different just having a tidy one," Lockhart said.

Not only is Jeff about achieving perfection and marching to his own beat, he's also about driving his creation. How many miles does this Jetta have on it? 193000 and counting. Considering he bought it brand-new, that's proof he's not afraid to get it on the road and enjoy his hard work.

Talking of fearlessness, Lochkart and his friends decided it was time to fulfill their dreams, and after months of planning they opened Janky Garage in San Diego, CA. It's a shop specializing in air-ride kits, tidy installs and aesthetic modifications. One look at this daily-driven, highly-polished Jetta and it's evident they know a thing or two about stanced Dubs... and with nearly 200,000 miles on the shop car, they know how to make them reliable, too. So if you're in Southern California and looking for a shop to help you with a project, check out the website on the previous page.

Thanks Sam Walker at Car Toys in Tacoma, WA, Edgar and Mike at Parr VW Bremetron, WA, Becky and Matthew at Pure Motorsport 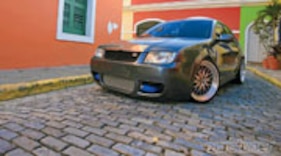 Jose Cora's competitive spirit is the reason he chose to turbo this '03 VW Jetta GLI VR6 and nicknamed it the "No Friends" project. - Eurotuner Magazine 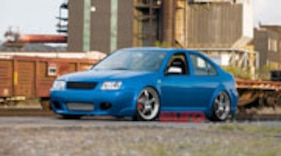 Check out Christina Tran's 2003 Volkswagen Jetta 1.8T, one of the most electrifying Volkswagen show cars on air ride. - Eurotuner Magazine

Our full online web feature on our very own project dub. - eurotuner magazine