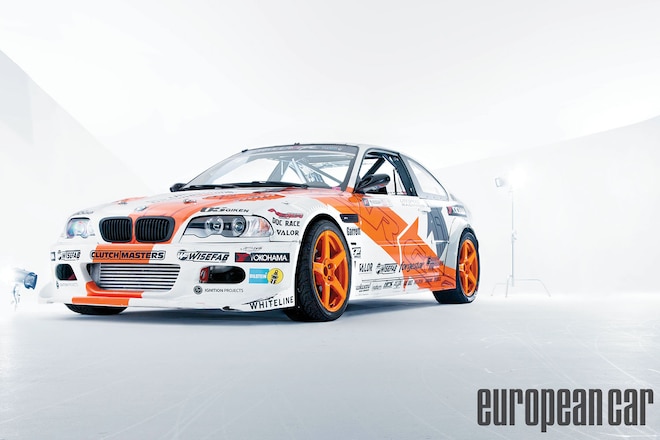 Hopefully you're already familiar with the sport of drifting and, although a relatively new form of motorsport, it's one that requires tons of skill to master and enormous dedication to break through into the professional ranks. And naturally, you need a thoroughly developed, highly modified machine to be competitive.

Our good friend Michael Essa happens to be a Formula Drift driver who's sitting pretty in second place in the championship as we write. His shop, GSR Autosport, built his E46 M3 in-house and was nice enough to bring it to our studio, enabling us to show you the battle-scarred beast, warts and all, in its full glory. 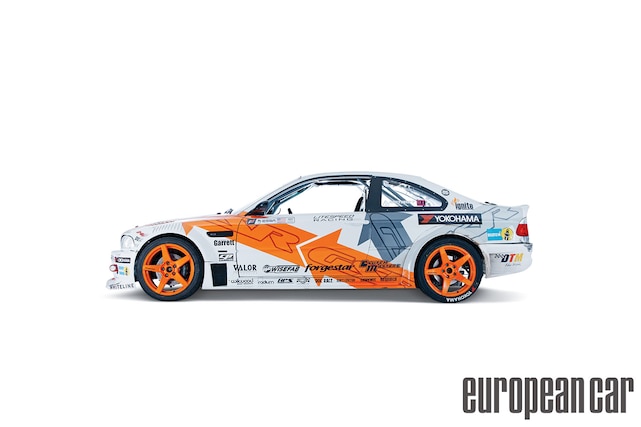 With an autocross and road-racing background, it's unusual for a guy like Essa to gravitate towards drifting. The sport has a certain stigma, partially because scoring is based on style rather than time, which appears to confuse the purists. "There's plenty of sports in the Olympics that are judged!" Michael countered. "Even freestyle motocross, skateboarding, BMX; these are all judged sports based on style and they all have huge followings, so why should drifting be seen any differently?"

You don't have to be a fan of racing to enjoy drifting. No matter who you are, it's downright jaw-dropping to see these guys running door-to-door, completely sideways, with smoke pouring from the fenders as their bumpers scrape the track walls. This is why there are big sponsors and the events are completely sold out.

Essa's involvement is no surprise when he explains that while he enjoys racing against the clock, he's "always enjoyed overdriving cars and sliding them around."

"Although I wasn't into drifting, I took my Datsun 510 Rotary turbo to the first D1 Drift event at Irwindale Speedway and saw the guys drifting like maniacs. It was pretty cool and I knew I could do it," he recalled.

After some searching around, he found local organization 626 Drift and competed with them in a few events at Willow Springs Raceway. "I threw an LS1 motor in my Mazda RX7, but after a few events they stopped letting me compete because I kept winning," he laughed.

Fortunately, there was another place for Essa and his RX7. A place where the skilled drifters could compete in billowing smoky glory: Formula Drift.

"I was invited to a Red Bull drift event in Arizona and scored second place in the qualifier, which got my license," Essa said. "After that I went straight to Formula D in my RX7."

This series pits the best drivers against one another in a test of style, speed, agility and proximity. Essa was new to the field but up against some seriously talented drivers. In his first year, 2009, his best finish was sixth place in Las Vegas, but for 2010 he teamed up with Nick Richards to form GSR Autosport with plans to continue in Formula D.

That year they built an E92 BMW 335i, which was memorable for its E60 M5 V10 motor, yet it wasn't powerful enough to be competitive. So the car was transformed for road-racing duty and GSR moved on to a BMW Z4 that would be a better drifting platform. And while it evolved rapidly over two seasons, the short wheelbase proved too twitchy to drive at the limit.

"At the end of the 2012 season I realized I needed to make a big push," Essa said. "I knew I could do better with the Z4 but decided that if we switched to the E46 chassis and took the drivetrain from the Z4, the longer wheelbase would be more competitive. So we took a chance and it worked out great!" he laughed.

Now in his fourth year of Formula Drift competition, Essa finally took his first steps on the podium and is in a close battle to actually win the championship. "I've learned a lot over the years," he admitted. And while his skill level has undeniably increased, the E46 was exactly what he needed to take his career to the next level.

So what would it take to transform a regular BMW into the tire-slaying battleship you see here? Well, the GSR M3 started life as a humble 2005 325i, but was converted to M3 spec. It's since been dubbed "Die Ultimative Driftmaschine", which is German for The Ultimate Drift Machine.

There are many regulations to comply with when building a Formula D car, so the chassis hasn't been modified drastically. In general, like any street or race build, the GSR M3 is a combination of parts that could be fitted to any E46 M3.

It utilizes the factory S54 3.2-liter block but GSR built the internals to withstand the boost pressure since the main power adder is a Garrett GTX35/28R twin-scroll turbo mounted on a DOC Race tubular exhaust manifold. This provides a 750hp wallop to the rear wheels, or about 500hp more than stock!

Since the factory transmission wasn't up to the quick shifts, high loads and constant beating, GSR machined the bellhousing to accommodate Tex Racing four-speed dog gears and a Clutch Masters 850-series twin-disc clutch. The power is then transmitted to a quick-change OS Giken SuperLock limited-slip diff, which required some modifications to the rear subframe to fit.

A common misconception is that drift cars are unbearably stiff and bouncy, running on worn all-season tires without an inch of suspension travel. Sure, you could set up a car this way if you want to slide around in a parking lot, but at the professional level, the cars aren't much different from a road-racing spec. The main difference is the amount of steering angle, and that comes from the specialized Wisefab high-angle kit. It's an insane piece of equipment that allows almost 70? of steering angle at full lock!

There's no camber adjustment on the car, just double adjustable Bilstein MDS Motorsport coilovers (as found on E46 M3 and Z4 GT racecars around the world) and the Wisefab arms.

Like any racer, more rubber on the road is an advantage, so GSR used the GTR widebody kit from DTMFiberwerkz. Inspired by the E46 M3 GTR V8 racecars, the kit gives the E46 an extra 8" of width up front, allowing the team to increase the car's track width for greater stability. The styling also demands the M3 get some respect from the field of JDM missiles and Domestic brawlers.

When it comes to stopping, drift cars don't need to deal with heat accumulation, so the brakes can be relatively small, making them light by competition standards. As a by-product, the reduction of unsprung weight and rotating mass is an easy way to improve the car's handling dynamics and acceleration.

Wilwood four-piston calipers take care of the front, with two-pistons out back. And the trick to initiating a drift or scrubbing speed is the hydraulic handbrake. It gets its own two-piston Wilwood Dynalite calipers on the rear, offering instant lock-up.

It's no secret, Michael Essa has been one of the most improved and exciting drivers to watch this year. His attack angle and speed, as well as the sound of the boosted S54 and its angel-eye headlights peeking through the smoke mean he just might take the championship. "I try not to think about it," he told us. "I'll just keep doing what I've been doing and see what happens. The closer we get to the last race, the closer I am to winning the championship as a privateer."

In case you didn't know, that's a big deal when you're a small team competing against fully sponsored rivals.

Under his calm exterior, Michael is obviously excited, and why not? He's put himself in an amazing position to be crowned as one of the best drivers in the country, and he's doing it at the wheel of a BMW M3 in a sport that's been dominated by Japanese and domestic cars. It's a triumph of epic proportions and we'll be there, win or lose, to cheer him at the finish.