In 1989, VW released one of its rarest production cars of all time. It was a hand built specimen from the production plant in Wolfsburg, Germany. The rare gem wasn't a high-performance race edition with extra power and exclusive suspension upgrades, but was themed around its Helios blue paint.

VW produced only 1500 examples of the special 1989 Jetta GLI 16v in Helios blue, and the lucky few who obtained an example were bestowed with the typical features found in a loaded GLI. But alongside the exclusive exterior paint, the factory Recaros also received special blue plaid inserts. Aside from color-matched wheels, the cars were identical to their GLI counterparts.

Some deemed the Helios upgrades insufficient for admiration, but the exclusivity stood the test of time, with many enthusiasts still lusting after the low-production sedan built in the venerable Mk2 GLI chassis. 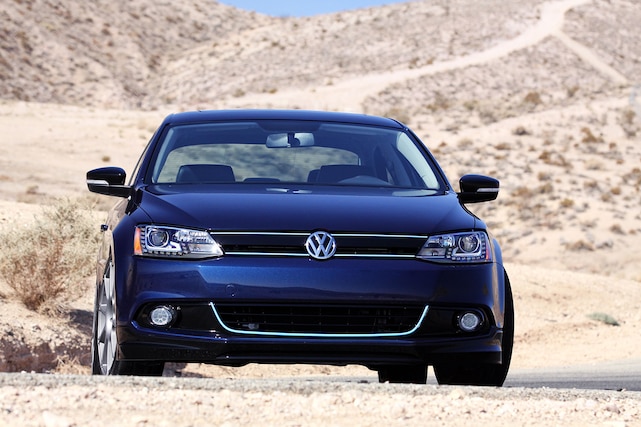 For the past few years, FMS has built cars for the SEMA show and chose a pair of Jettas to steal the show in 2013. The first one can be seen here, while the second car is a more extrovert widebody conversion for the popular VW sedan that can be seen here. You can read about both cars, and their build up here. (Widebody build, Helios Jetta build)

"Not to take anything away from the wonderful Golf GTI platform, but the Jetta is a capable car that can be equally appealing when modified," said Rory Stramer from FMS. "For many people with families, the Jetta is a more viable option. So we wanted to show VW fans how the current Jetta adaptsto this sort of treatment. Therefore, we decided on a crazy, high-horsepower, widebody build for one car, but took a more attainable approach to the Helios tribute car," he added.

"When we first explored the idea of building cars for our SEMA booth, I instantly suggested we build a Helios tribute car, simply because I owned an original and still regret selling it," said Gil Plasencia from FMS Automotive in Cerritos, CA and builder of this car. "The Mk2 chassis really spoke to you and the Helios cars were extra special with the blue paint and special interior. It was exclusive and something only hardcore VW fans would know about."

Keen eyes will note that the Tribute isn't actually Helios blue. It's finished in Tempest Blue Metallic, which is almost a dead ringer for the original paint. It's available on the 2014 VW Jetta and helped inspire this tribute.

Before balking at the paint code, understand that FMS could have painted it in the original color, but preferred to use Tempest Blue because it's available right now to anybody wanting to build something similar.

"For the build, we again sourced as many parts as possible from the VW Accessories catalog. We even sourced some OEM parts from across the pond, while everything else came from well respected aftermarket companies that again make the project easily accessible to anybody looking to replicate our car," Plasencia said.

The exterior is simple but effective thanks to OEM parts like the gloss black mirrors and VW Accessories body kit. The latter was painted black to reflect the trim on the '89 car.

Other OEM accents include a gloss black Jetta Hybrid trunk spoiler, grille and headlights. It also has smoked tail lights from the 2014 GLI as well as custom LED foglights and blue pinstriping on the front-end.

Life on the inside is more of the same: elegant and restrained. It starts with Recaro Specialist seats that were reupholstered in black leather with blue/grey cloth inserts, designed to echo the original Helios cloth. This was also carried over to the rear seats. A VW GLI steering wheel was installed, and it was trimmed in black leather with blue stitching. This treatment was then carried over to the e-brake handle, center console and famous golf-ball shift knob.

The RNS315 navigation system and back-up camera were retrofitted into the car. Harder to spot is the VW Accessories sound box and digital sound processor that were discreetly mounted in the spare wheel. It improves the sound without sacrificing space and was one of only three units currently in the US. 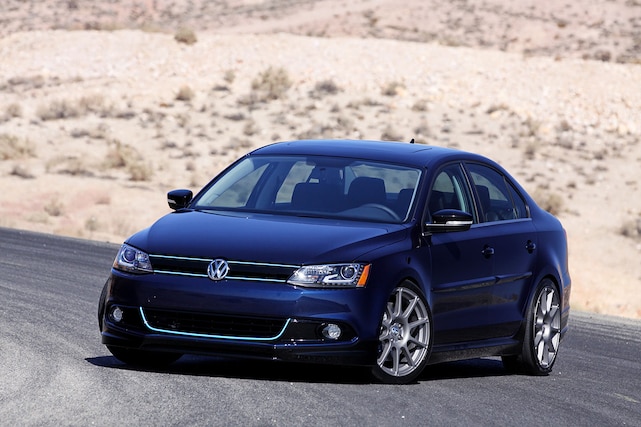 "The interior is so cool. It's got the old school, throwback feel of the original car. I think we nailed it," Plasencia opined. All show and no go wasn't part of the equation. After all, the original 16v cars were fast in their day, so ignoring performance wasn't going to fly.

Under the hood you'll find the new 1.8T fortified with APR software and an early production version of its Carbonio carbon fiber cold-air intake.

Downstream, there's a custom 2.5" exhaust built for FMS with a Magnaflow muffler to uncork the power and sound.

Of course, more VW accessories found their way onto the new motor, such as reservoir caps, while FMS custom-painted the engine cover. When it comes to cutting corners and slowing your roll, you'll find color-matched Golf R brakes at each corner, with H&R coilovers bringing down the house.

Turning this symphony of speed into forward motion are a set of ceramic-coated 19x9.5" VW Motorsport wheels that were wrapped in 235/35 R19 Nitto Invo tires.

"I think the combination of parts works. It's got old school flavor mixed with modern style and just enough performance. It's also something anybody could build. So I'm pleased with how it turned out and hope it sparks enough interest that VW builds another Helios Edition in the near future," Plasencia said. 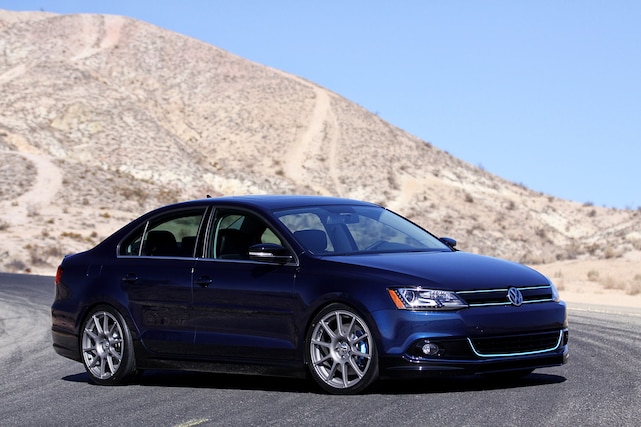 So almost 25 years after VW created its original Helios sedan, of FMS Automotive has paid tribute to the cult classic with a build that would do the original proud.

For the build feature on this car click HERE

For the build feature on the Jetta widebody click HERE

For the story on the finished Jetta widebody click HERE 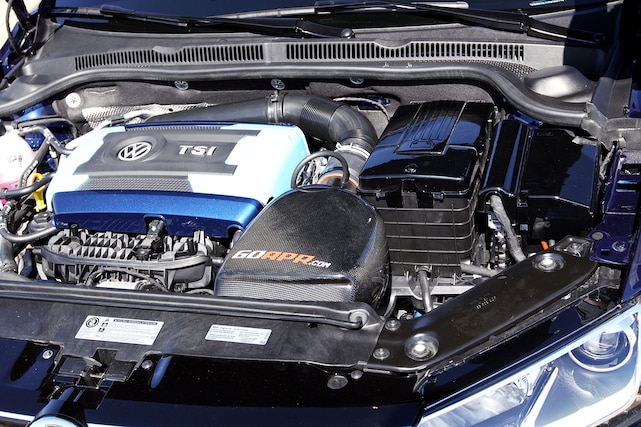 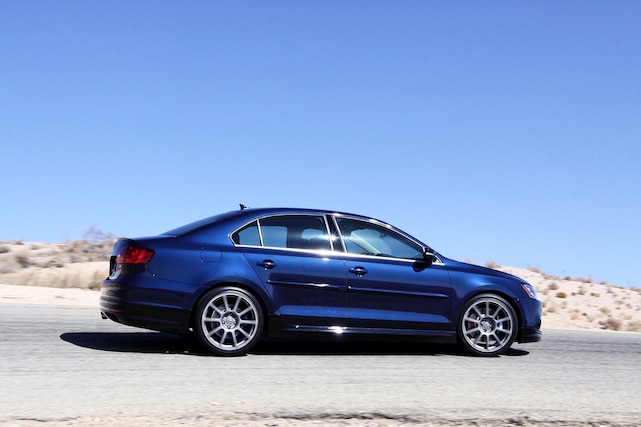