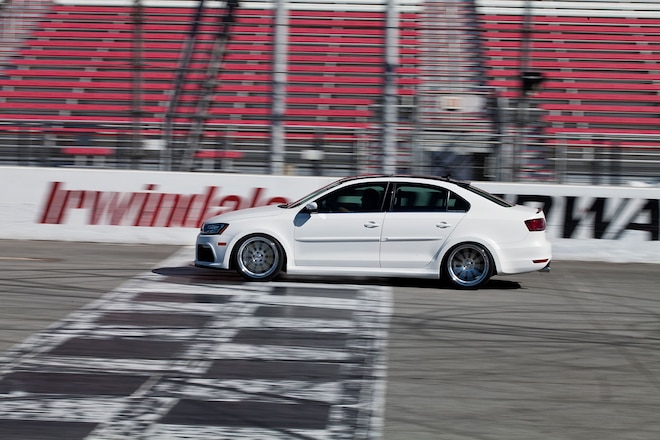 Like all good stories, this one has its share of trials and tribulations, but there's also a happy ending. And unlike most project car builds, that tend to meet adversity once inside the workshop, this car was almost derailed just days after the concept was born. "You wouldn't believe what we've been through with this build," said Gil Plasencia from FMS Automotive in Cerritos, CA. "It's come a long way in a short time and it was a fierce battle at times, but the blood, sweat and tears were worthwhile once the completed car rolled into the light of day."

So what happened? Parts didn't arrive on time, pierced a finger with a screwdriver, dropped a hammer on a toe? "This car isn't the one we started with. It was called into action when our first Jetta, a beloved example, was destroyed by a hailstorm while being transported through the horrible August storms in Colorado," he explained. "When we finally laid eyes on her, it was devastating. She was destroyed. There was about $13000 in hail damage and the car was a total loss. It was a huge setback on a project that was only months away from its debut at SEMA 2013!" 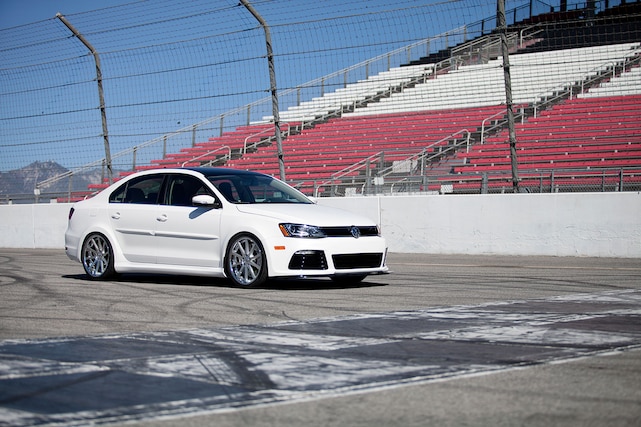 The original Jetta had been a testbed for lots of aftermarket parts and was well loved by everybody concerned. It had a rich history but now it was finished.

Suddenly the search began for a second SEMA project car. And with little more than a few months to spare, an utterly stock 2014 Jetta SE 2.0T was dropped into the capable hands of Eurocode Tuning in Torrance, CA where the crew made quick work of removing the APR-fortified powertrain from the deceased Jetta and transferring it into the new white car.

The reason the original car was on a trailer at all was because under the hood was an APR stage 3++ built motor with a big turbo kit, which was rated at over 450hp at the wheels (500hp at the crank) on 93-octane pump gas. It was returning to APR's HQ in Alabama to FMS in California when the storm happened.

Inside the block you'll find APR forged pistons and rods affixed to a stock crank. It's topped by a ported cylinder head. However, the centerpiece is the Garrett/Honeywell GT3071R turbo anchored by an APR exhaust manifold and supported by a software upgrade, bigger injectors, front-mount intercooler and a carbon fiber cold-air intake. IT also has massive downpipes and full exhaust, which was later swapped for a custom dual-exit arrangement by FMS. 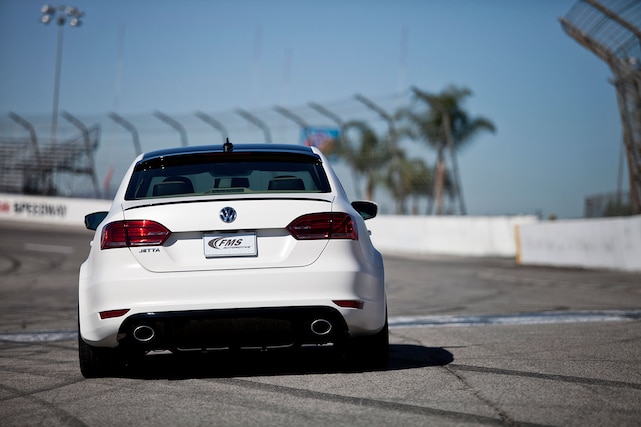 With the heart transplant completed, the new Jett returned to FMS where it underwent the rest of its modifications: "We wanted something that was bold but sophisticated. We also try to use as many OEM parts as possible, so we started with a Golf R front bumper and custom splitter, but decided the extra horsepower justified wider fenders. These would allow us to make room for wider tires to help get the power down," Plasencia said.

And they didn't hold back. The car is widened nearly 2" at each corner, resulting in a car that's aggressive, but not blatantly so. The custom fenders were augmented by fabrication work on the Golf R front bumper and side skirts as well as a GLI rear bumper to ensure all the panels were aligned. "It took a lot of time to get the body lines to match. We wanted it to look like it was a factory conversion," Plasencia said. 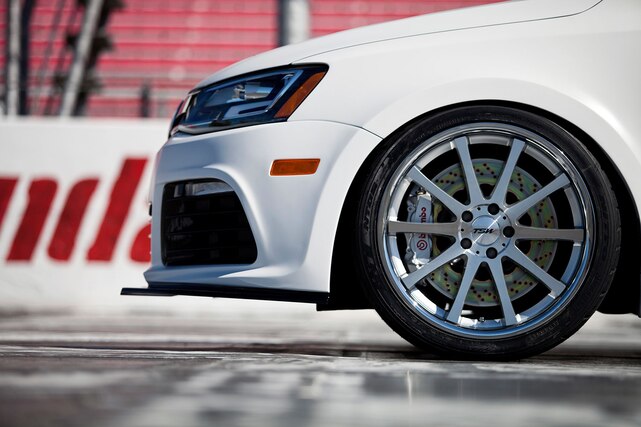 Other OEM additions included the Jetta Hybrid grille, trunk spoiler and painted mirrors. It also received smoked LED tail lights from the 2014 GLI for good measure. Once FMS had created a custom roof spoiler and its own door trims, the car was painted in its original white but with a satin top coat. The roof, however, was finished in gloss black for contrast and to tie into the Golf R and Jetta Hybrid grille pieces. The TSWs had to provide clearance for a Brembo four-piston front brake kit that uses 14" slotted rotors. these were accompanied by a Golf R rear brake upgrade.

Moving inward, you'll also find H&R Street Performance coilovers and its Sport sway bars to provide stability a the car's intended track days, and they'd get the Jetta low for the SEMA crowds.

Life on the inside is as good as the party on the outside, thanks to custom-trimmed Recaro Sportster CS front seats wrapped in black and beige hide.

The same leather treatment was bestowed on the rear seats, door panels, GLI steering wheel, e-brake handle, shifter and center console. A set of Corinthian Textiles floormats keep the carpet clean, while FMS created a rack in the trunk that houses two Shoei helmets and the spare TSW wheel. 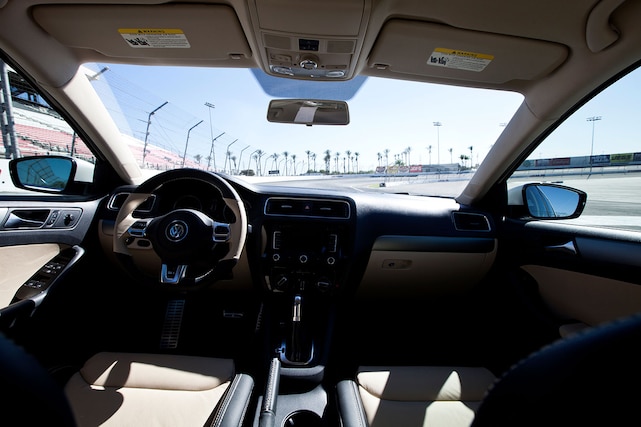 Although not as easily spotted, the infotainment was upgraded with the Volkswagen RNS315 Nav system that includes a backup camera. It also utilizes the Volkswagen Accessories' custom sound box and digital sound processor, which is hidden in the spare wheel well. Just hours before this 450hp Jetta widebody was slated to leave LA for the bright lights of Vegas, it was rolled into the daylight for the first time and to our photo shoot. "We wanted to focus on the details, to show enthusiasts the Jetta is a great alternative to the Golf/GTI platform. In some cases, I think it's even more versatile because of the sedan design, which can suit families better. I think this high-powered approach shows people just how great the Jetta really is," Gil said.

So if you're headed to SEMA 2013, be sure to drop by the FMS Automotive booth and check out this Jetta widebody and the Jetta Helios Tribute Car we covered in another posting. 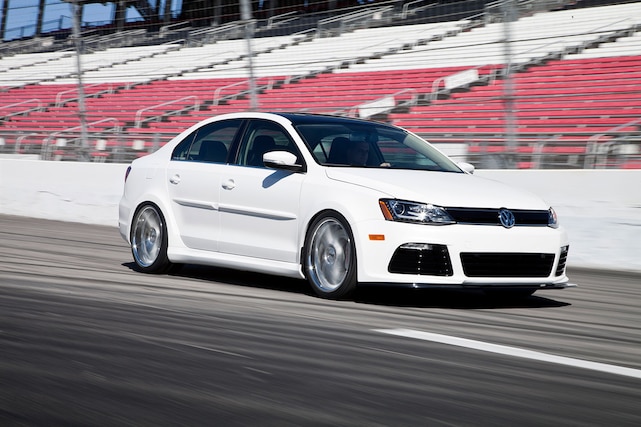 To see the full build story on this Jetta widebody, click HERE

To see the full feature on the Jetta Helios Tribute Car, click HERE 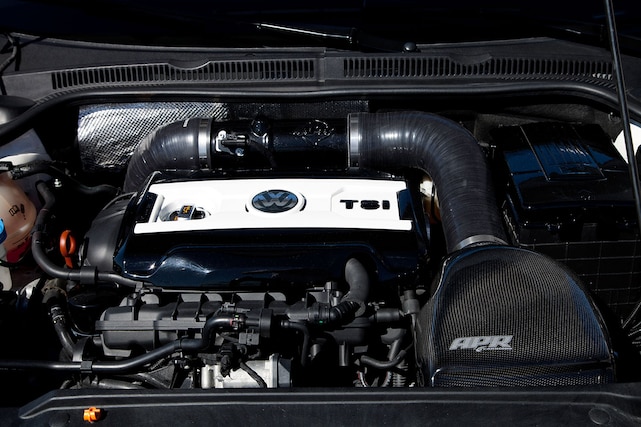 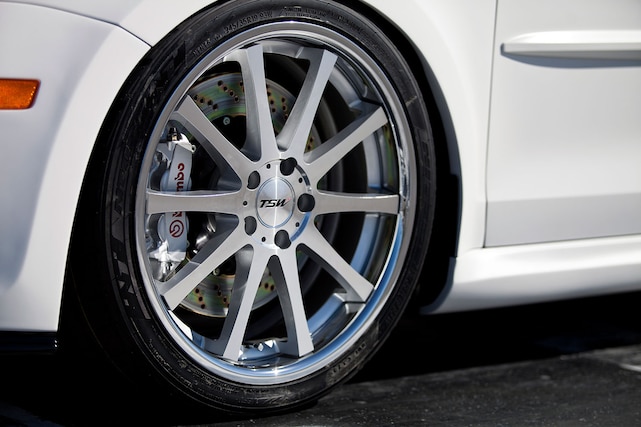 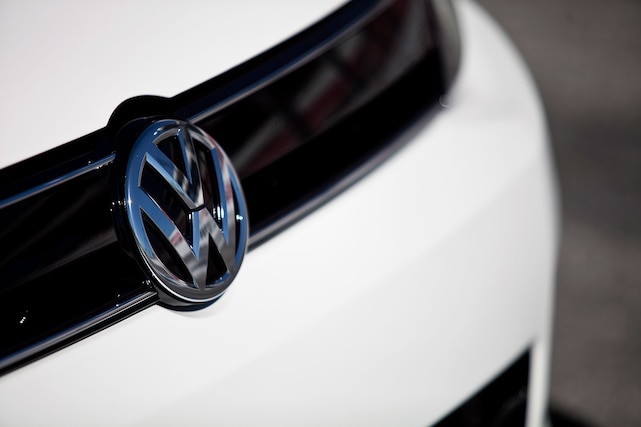