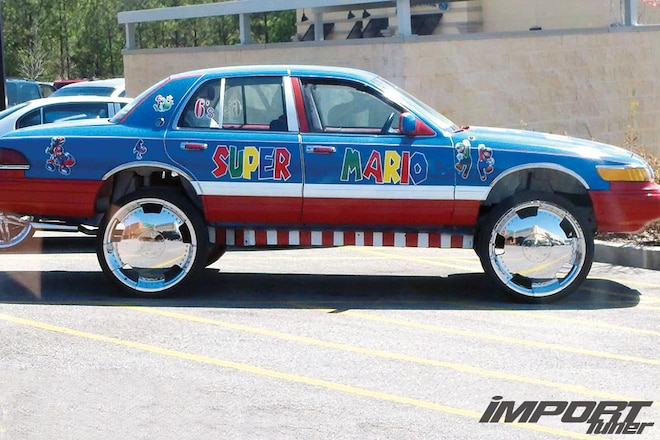 Nothing spells saving money more than performing a DIY fix on your vehicle. Repairing something with your very own hands can be gratifying, but there comes a time when certain repairs should be left to the experts (see examples below). These images portray how simple DIY repair jobs can quickly turn into a living nightmare. We found no surprise that a simple web search consisting of the words "ghetto DIY cars" landed us hundreds of photos of the worst offenders. The hilarity was simply too much for us to bear, so rather than keeping these gems to ourselves, we decided to share a list of the Top 10 most wild and wacky modifications that people actually consider "DIY". 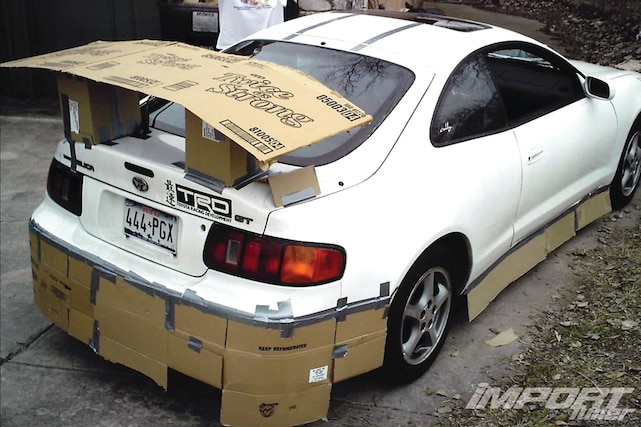 Body kits:
Interested in a custom cardboard body kit? Give this guy a ring and he can set you up with a "Twice as Strong" toilet paper wing for some added downforce. 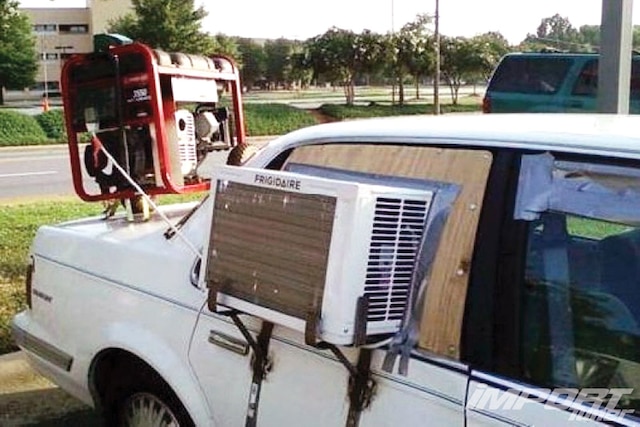 Air-Conditioning Repair:
Yes, your eyes don't deceive you. It's a Frigidaire A/C unit tack welded to the door that's powered by a generator strapped to the trunk. 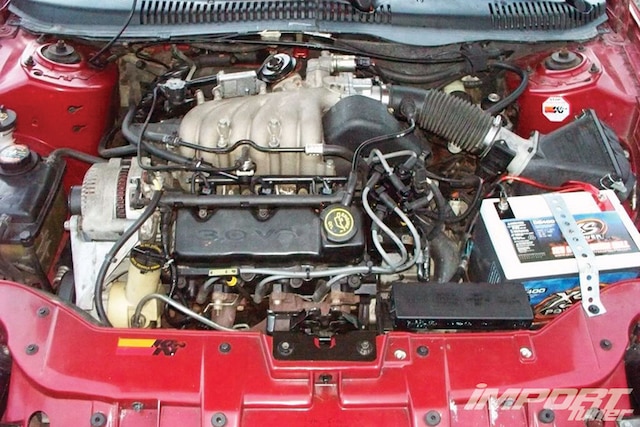 Battery Tie Down:
Bungee cords and flimsy tie downs seem to be the most common DIY fix among the few but proud, but all it takes is a dislodging of the metal bracket before it comes in contact with both sides of the terminals. Can you take a guess of what would likely happen next? That's right, folks, a big red fire truck comes to the rescue to put out the fire. 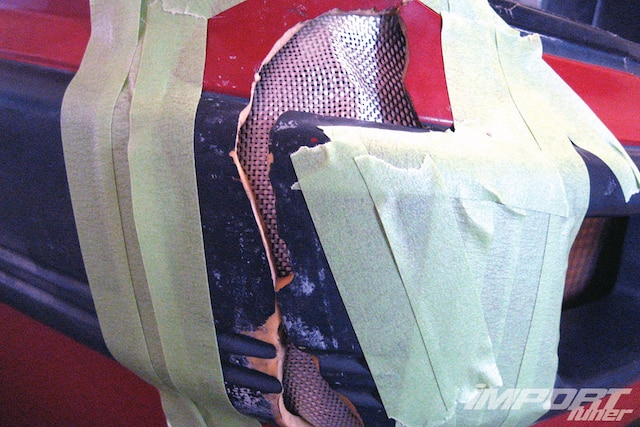 Bodywork:
This photo was quite the conversation piece in the office when it came time to finding the ideal bodywork photo. Err . . . is that a burlap potato sack tucked under the plastic? Yes, we understand that times are tough and everyone wants to repair his or her car on a budget, but this is just ridiculous. 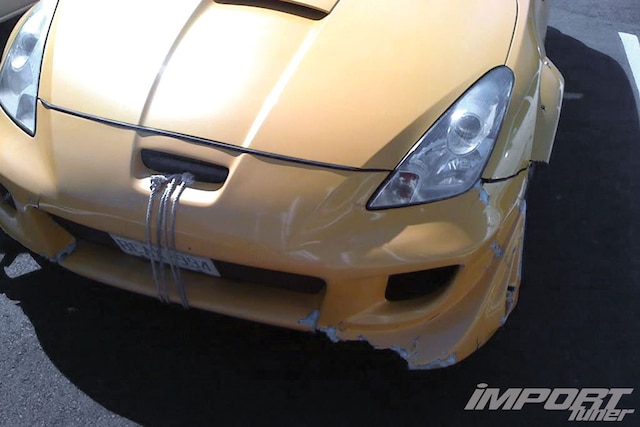 Rope, anyone?
MacGyver he is not, but it appears the vehicle owner was resourceful enough to wrap some twine around the front of his car to keep both the front bumper and busted lip from falling off. Clever indeed! 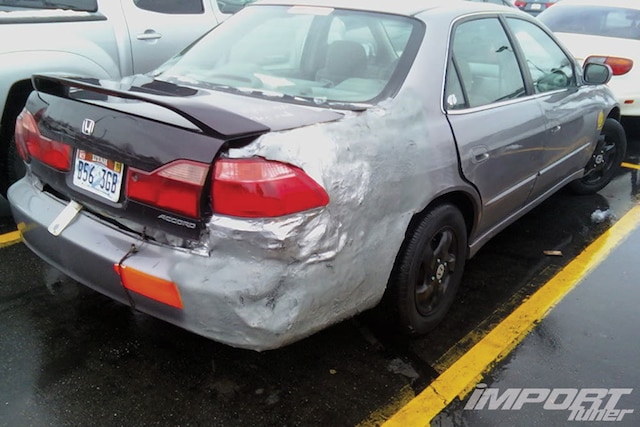 There are no words to describe this level of fail.
We just know it's not supposed to look like this. 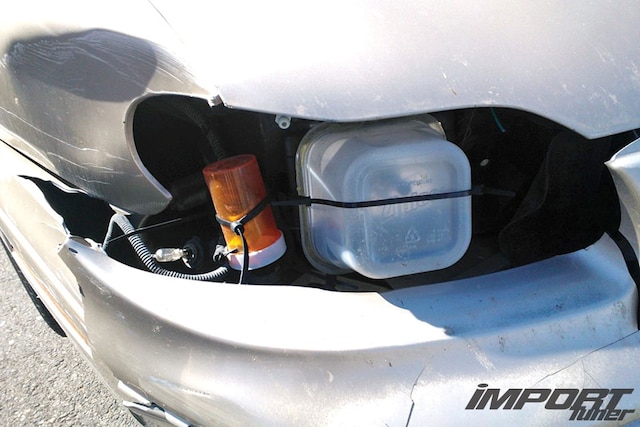 Headlight Fix:
We had to give this guy props for thinking outside the box. The clever usage of his grandma's medication container as his turn signal and Ziploc container headlight definitely receives two thumbs up!

Glass Repair:
When is enough enough? Obviously for the owner of this Subaru, masking tape seems to be aplenty. We counted anywhere from 20 to 30 rolls used to create this rats nest.

Vanity mirror, anyone?
Next time your mom asks for her mirror, tell her it's been put to better use.

Custom Paintjob:
Perhaps this is a mash up consisting of the Delorian from Back to the Future and the Ecto 1 vehicle from Ghostbusters, with a set of Russian logo red star hubcaps thrown in for good measure. Your guess is as good as ours, but as the saying goes, "one man's trash is another man's treasure".

Import Tuner
Cruisin' for a Bruisin': Driving the 1969 Toyota Corolla IS F V-8
From the outside, this looks to be a pristine vintage Corolla. But a closer look reveals so much more.
Miguel Cortina – May 28, 2020 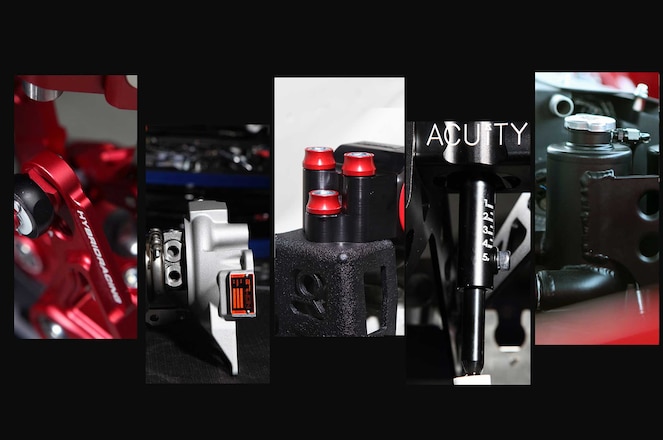