I spent several decades working for HT's sister publication, European Car. Obviously, the title specialized in hardware from across the Atlantic: Audis, Porsches, VWs, Lamborghini's, etc. For the most part, they're good cars, very good even. There were, however, a few exceptional examples, specifically those from Modena and the crew at Ferrari. While BMW, Mercedes, and Audi offer a similar experience; one does not soon forget a Ferrari.

The NSX belongs in the same "unforgettable" file. Not sure if anyone has ever actually referred to the NSX as a Japanese Ferrari but that's what it feels like ... to me anyway.

That the NSX was years ahead in its design and construction is a well-known fact. Although it's been nearly a decade since the last NSX rolled off of the assembly line, the car has managed to stay current, both in performance and appearance, turning heads with neck-snapping double takes. The car on these pages does that too, only much faster. The inhale and exhale of forced induction will often do that.

After heavily modifying a 350Z and ultimately being unsatisfied with the car, Dr. Joseph Viggianelli needed to make some intelligent decisions on his next project. "The wife threatened profusely she would only tolerate one more project car," recalled Viggianelli.

"So I set out to find a low production vehicle that still had modification potential. It had to be an import with a rareness factor; essentially, I wanted something that would get me pumped every time I saw it—the NSX fit the bill perfectly."

After studying the different versions of the car, Viggianelli decided on an early production model primarily for structural integrity. The fixed-roof model narrowed the search to '91-'94 models. After finding a mint condition '91 with low miles, Viggianelli refreshed its appearance with a 2002 conversion and a few tasteful aftermarket upgrades. After converting the car's aesthetics, he focused on the suspension and brakes, both systems that his good friend and master mechanic Dustin Weinand was well-versed in. Weinand is a race car mechanic and fabricator by trade with a natural talent for thinking outside of the box.

Weinand fine-tuned a Stoptech big brake kit, removing the stock ABS system in favor of a Tilton proportioning valve with braided stainless lines. Now that the underpinnings had substantially more performance, it was time to throw substantially more power at them.

Given the choice between power or handling, 9 out of 10 guys will opt for horsepower. While Viggianelli wanted the increased ponies as much as the next man, he also wanted to strike a balance with the chassis.

"My requirements were simple," recalled Viggianelli.

"Pump gas, air cooled, and no cutting of the body. I wanted something the factory might do if it had gone the force-fed route."

There was virtually no NSX-specific info on a front-mounted intercooler setup, so Dustin began studying established rear mount turbo kits (i.e., STS Turbo). He used two-inch aluminum tubing to run all the way from the turbo to the custom-built Spearco intercooler. The size of the tubing allowed him to tuck the tubing through the AC tunnel under the car and over the steering rack with virtually no obtrusive low spots. Despite the overall length of the tubing, its diameter helped maintain flow velocity while providing a certain degree of cooling as well (a happy accident). Given the engine would retain all of its stock internal bits, cooler equals better.

"We were stoked to find that using only the stock radiator cooling fan and minimal supplemental fans on the DYNO, the FMIC kept the air temps so low, we could run it back-to-back with virtually no heat saturation," said Viggianelli.

"We tested three different turbo sizes before settling on the Turbonetics GTK 450. This turbo had virtually no lag which was surprising considering the length of the piping."

Although it sounded awesome, a prototype muffler system was too loud for daily street use. Keeping the exhaust decibel levels to a minimum was tricky considering the lack of space for a muffler. Weinand came up with a unique solution that would keep the exhaust unrestricted and the decibels down. He took a rather expensive Borla X-R1 multi-core muffler and hacked off the inlet and outlet. A 3- to 4-inch transition was made from the turbo to the muffler. The exit pipe is 4 inches all the way to the finisher. Dyno pulls before and after confirmed the exhaust system resulted in virtually no loss of power. To keep the engine secure in the car, Weinand modified the factory engine mounts to incorporate the lightweight aluminum brackets which house a polyurethane flanged cylinder bushing.

We met up with the good doctor in Newport Beach, CA, where exotics sprinkle the landscape like so many Starbucks. Despite being more than a decade old, this NSX garnered neck-snapping double takes (nothing is funnier than watching rollerbladers skate through the bushes). Dr. Joe and Dustin managed to pull off a brilliant balancing act; a car that dances about the edge of street car and track star. File this one "unforgettable."

Five Great Ways to Screw up a Turbo System

Use Gigantic Intercooler Piping ... it looks cool
Oversized IC piping causes boost lag and poor drive-ability. IC piping should be sized for the power levels you are trying to achieve with the turbo system. Just like you size your exhaust on your car for the power output the motor is making.

Place the Wastegate Location Anywhere
The percentage of exhaust in contact with the waste gate is the percentage of control you will have. Proper placement of the wastegate in the exhaust ?ow path will dictate how efficiently you will be able to control the boost. No cheated bends should be used to accomplish the angles that are needed for proper placement.

Look For Cheap Turbo Deals ... They all Do the Same Thing
eBay knockoff turbos are all that is unholy in turbo charged cars, staining turbo kits everywhere with an undeserved reputation for lag, weak output and poor drivability. You get what you pay for when it comes to turbos. Do your research and it will certainly pay off in the end.

Use the Biggest Turbo You Can
Don't listen to your girlfriend ... bigger isn't always better. Use turbo ?ow charts to optimize efficiency. Figure out what type of power numbers you are trying to achieve and how the car/system is going to be used. Are you going to spend lots of time tickling 7800 rpm? Probably not. Choose a turbo based on how the car will be used.

Clarion has announced that the next project car they will be taking on for their Clarion Builds program will be a 1991 Acura NSX. 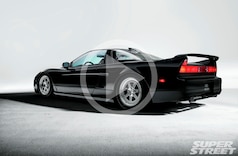 Chad Castelo's 1991 Acura NSX decked out with numerous rare Mugen goodies is physical proof of what a diehard Honda fanatic he is.

As the proud owner of this 1991 Acura NSX, Jeffrey Nguyen is living a dream that many Honda-enthusiasts have every night.

Kris Yu's custom widebodied 1991 Acura NSX make look subtle at first but that is the reason why it is one of the cleanest NSX builds we've ever seen.

Paul Coffman's 1991 Acura NSX sure is fast. It should be since it's fitted with the very same engine the LoveFab NSX was using at Pikes Peak in 2012.

It's a far rarer thing, though, when an individual enthusiast takes on a design project as extensive or ambitious, but that's exactly what Jeff Hoffman has done with his radically restyled 1991 Acura NSX.