An introduction to the GS-R build

After finishing up the engine on the Project Si sedan, and with more wait time surrounding the Project AP1, I thought I'd pick up a new build to get started on for 2014. I had my mind set on a second-generation Integra of the GS-R variety, and I was dead set on holding out until I found a teal or red version complete with its original B17 powerplant. A few months of searching and I located a 1992 Aztec Green Pearl model online, and just a few weeks later, it stole one of my garage spots.

Clean title, 220,000 miles on the clock, original B17 still intact. For its age, it actually runs pretty well.

The body is in poor condition. Dents, dings, and a peeling clearcoat have plagued the 21-year-old body. The hood has a massive dent that requires replacement, and the hatch is showing some paint bubbling that's spreading. The brakes are almost non-existent and there are two different sets of tires, with all four in poor condition.

The original B17 will remain as the powerplant, but the engine will be torn down and rebuilt for turbo duty using aftermarket goods throughout. My vision is modern technology applied to the older B-series, and while I won't be swapping the entire engine out for something newer, the supporting cast will certainly be light years ahead of what was available in the early '90s. Any thoughts of just bolting on an off-the-shelf turbo kit were left behind pretty quickly when Jason Whitfield of Whitfield Racing offered to play a major role in the build. Whitfield has been involved with building cars, both import and domestic, for a few decades now and rather than slowing down, he seems to only be speeding up. His shop is fully stocked with go-fast goods, a dyno, and he offers his own line of products including headers, exhaust manifolds, cam gears and more, along with top-notch custom fabrication. He asked that I bring the car to his shop to start the mock-up process on the turbo kit that he'd be designing. Though he offers a top mount B-series exhaust manifold for the later model Integra, space constraints on the DA/DB2 would require some changes to the design in order to properly place the turbo between the head and top portion of the core support.

Photo 3/20   |
I can remember constantly rebuilding distributors for my car and my friends’ cars. Looking forward to eliminating this one.

Photo 5/20   |
Whitfield Racing’s B-series exhaust manifold. A few changes will be made in order to clearance the turbo properly. Once complete, the ’90-’93 Integra manifold will be available to the public via Whitfield’s website.

Before arriving to Whitfield's shop, I ordered a few parts that will have an effect on the available space under the hood of the DB2. Engine mounts for example, will place the motor in a slightly different position as the old, worn out factory mounts allowed it to sag. As always, I contacted Hasport and they supplied a set of their industry-standard billet aluminum mounts. These mounts will properly position the engine, fight engine movement, and with a 62A urethane rating, won't shake the car apart.

Photo 6/20   |
A staple in any project I take on; Hasport engine mounts

Also on the list of direct bolt-ons is the K-Tuned traction bar that we test fit and used as a guide for taking measurements for the custom radiator that will be on order once the mock up process is complete. The main bar is produced in chromoly steel, with the end plates made of steel. Everything is Tig and Mig welded together and powdercoated for longevity. The lightweight aluminum radius arms are fully adjustable and the entire unit bolted up perfectly-just like a factory piece. Also from K-Tuned is an adjustable short throw shifter. It features a height adjustable pivot ball and the upper portion of the shifter is actually offset, allowing you to set it up however you please. While it might seem far too early for this modification, its depth under the car can cause issues with exhaust piping clearance since we'll most likely be running larger, 3-inch piping.

The K-Tuned traction bar is ultra solid, a direct replacement, and bolts up effortlessly.

Photo 11/20   |
This K-Tuned short shifter is incredibly well designed and a welcome upgrade.

The crater in the hood along with the bubbling, and most likely rusting of the hatch door was going to require complete replacement - a perfect opportunity to drop a few pounds. Seibon offered their OEM style carbon fiber hood and hatch, both of which are direct replacements. This will be about the fourth or fifth time I've used Seibon carbon-fiber products on one of my project cars, and every single time, the fitment has been exceptional. The uniform, consistent weave pattern encased in a protective, high-gloss clear-coat fights the elements and insures longevity. And unlike so many others, Seibon carbon fiber panels aren't flimsy, but rather rigid, which means they won't lose their shape over time.

Seibon’s carbon-fiber hatch and hood are ultra lightweight, rigid, and feature a precision weave all under a protective clearcoat. The hatch skeleton comes with pre-cut holes and slots to accept the factory interior paneling.

To slim down a little more, the hatch and rear side windows will be replaced with Flex-a-lite (FAL) polymer windows. Much lighter than stock, these scratch-resistant windows are molded to the factory window shape and essentially identical to the OEM glass, only lighter. Rather than using Lexan windows riveted to the car, the FAL windows use factory rubber and blend in so naturally that most won't even know they're installed.

Photo 18/20   |
Match Seibon’s lightweight carbon panels with FAL’s pre-formed polycarbonate rear windows and watch those unwanted pounds melt away. A weight comparison with the stock pieces will be done once the car hits the body shop.

Mild exterior changes will also include a lip and short decklid wing. John from JDPengineering has worked with me on a number of project cars and I'm a huge fan of his work. His aero pieces are street friendly, sleek, and never take away from the cars original lines. The JDP "OE style 1" front lip and trunk spoiler is available in carbon fiber or fiberglass. I chose fiberglass since I plan to have everything colormatched when the car goes to paint. The lip is bolted on using factory-mounting points, and the rear wing is light enough to stay planted using 3m adhesive that comes pre-set on the wing's bottom.

Once Whitfield has completed the mock-up, we'll pull the engine and split it apart for inspection before the bottom end is built and the head is freshened up. The chassis will head to paint for a much-needed revamp and the parts collecting will continue as Project DB2 is just beginning. Stay tuned ... 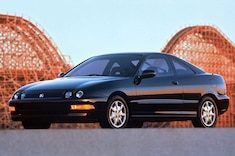