One glance at Jose Guzman's Arctic Blue Pearl Type-S, with its expensive JDM bits and pieces spattered over an overtly sanitary appearance, and you probably draw your own conclusion rather quickly as to what this car was built for. After all, you've been somewhat conditioned, albeit unknowingly, to assume that high-dollar Japanese aero garb is nothing more than an additional piece of flair in a community hell-bent on outdoing one another in hopes of moving up that imaginary ladder supported by street cred and "likes." Funny part about a car like Jose Guzman's RSX is that it's what you can't see that makes all of the difference in the world.

What's quickly becoming a well-sorted track car was once a full-time street car with little more than a few bolt-ons. Originally purchased in 2006 at a dealership in Orlando, FL, with just 40K on the odometer, the car was mildly modded, and was then put into hibernation for an extended amount of time. Guzman adds, "It sat in my parents' garage for about two years because I was getting stationed overseas in Japan. Once I arrived in Japan and got settled in, the mod bug bit me. I started buying parts and shipping them over to the U.S.--I seemed to have an addiction to Mugen DC5 parts." After completing his overseas duties, Guzman was then stationed in California where the build continued, and he attended a few meets and events. "It wasn't until I met Richard Payne from Garage Spec Motorsports that the build started picking up some momentum. He helped me with a lot of the new mod installs and suggested ideas on the build."

Time went by, and on a whim Guzman attended a few track events, first as a spectator, and shortly after decided to pick up a helmet and try a few sessions in his own car. Like so many before him, he was instantly hooked. He recalls, "It was lots of fun. That is, until I spun out at Buttonwillow in the rain and landed in the mud. The car was covered in mud, it was horrible, and to this day, I am [still] finding mud in strange places!"

Another turning point came about after a chance encounter with Justin Wesseling of Circuit Dreams by JW Racing, along with his father Jerry at Cal Speedway. Taking an immediate interest in Wesseling's Honda Challenge Civic, the two exchanged numbers and began devising a game plan to take the RSX to the next level in order to become more competitive. Many of Guzman's original mods were then sold in order to accumulate seed money for a K24 block to replace the car's tired, original 2.0L. Supporting mods are fairly simple with an emphasis on usable torque, rather than peak horsepower. Subtle compression remains, as the only block changes are the micro polished and properly balanced crank, while the original K20A2 head received Portflow's handy work, along with a set of Skunk2 valvesprings and retainers that support a set of OEM TSX cams. A custom Circuit Dreams 3-inch intake and BPI flow stack bring air in, while a one-off ASP header directs spent gasses to custom exhaust piping and a J's Racing 60R muffler. To avoid starvation on track, a K20 oil pump conversion and Circuit Hero oil pan baffle were both added to insure reliability. To many, the combination might appear rather simple, almost to a fault, but the results certainly are not, with a dyno finale of 275 hp and 210 lbs-ft tq.

In stark contrast to the mild engine development, suspension upgrades are anything but. Relying on a laundry list of aftermarket bushings, both polyurethane and spherical, tie-bars, upper and lower support bars, end links, roll center adjusters, and much more, the RSX delivers a level of handling light years beyond what the original chassis was capable of. J's Racing fenders provided enough clearance for 17x9 +36 SSR Type C's up front, while the rear relies on 17x8 +42 for a staggered set up that Guzman assures us has been very beneficial to the cars overall handling. 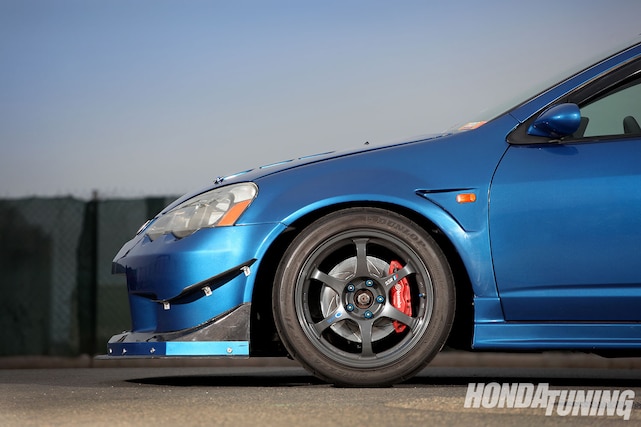 After fulfilling the propulsion and suspension requirements and significant testing, the team felt that the RSX could benefit from some additional downforce. Guzman states, "The car needed more aero, so Justin tasked Jerry with building custom risers for the Mugen wing and a custom splitter with PCI brackets for the BYS front bumper." The rear bumper was trimmed significantly and a Max Racing vented hood was added to aid in cooling. The result is an aggressive look that seems to be quite effective; helping to bring home multiple top three finishes in competition.

Weekend track days are the focus, but that hasn't stopped Guzman from driving the car on the street, even attending a few meets here and there for fun. Admittedly, parking lot encounters involve fielding a large number of questions about the cars aero enhancements and its aggressive demeanor. When asked about any future plans for the build, Guzman had this to say, "After a lot of testing and podium finishes at a couple of HFF events and Super Lap Battle, the car is becoming pretty competitive, holding its own on the track against lighter Civics and Integras from older generations. My goal for the car is to continue to develop it and have fun with it!" 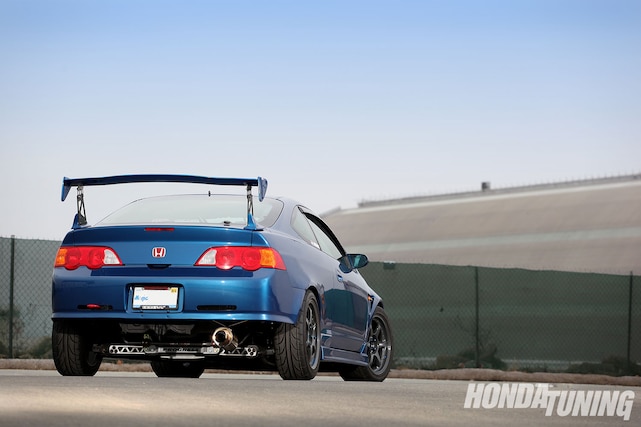