This may seem like an odd request, but take a moment to think back to some of the muscle car builds you've seen in your lifetime. You know the type: old American iron that looks pretty tame from the outside, save for some fat tires out back or a blower poking out of the hood, but packs more horsepower than you can. It's no secret that a lot of muscle car guys aren't fans of our scene, largely based on some of the gaudy, body-kit-clad, neon-colored imports built back during the days of the first Fast & Furious movies. For the most part, these old-school-era machines tend to rely on a simple exterior look, focusing their time and energy on the powerplant that lies under the hood.

Believe it or not, the owner and visionary of this beautiful Supra was nearly convinced to jump ship from import tuning to the world of muscle machines. Though Christopher Ocampo had built Japanese cars several times in the past, the focus was always on modifications more fitting of the car show scene than the dragstrip. After years of wrenching on Japanese platforms, Chris was drawn to Detroit muscle for the raw power the cars possess, all while hiding under a clean and relatively unassuming exterior.

Chris was hell-bent on building a powerful American ride for his next project, and a good friend mentioned to him that the Toyota Supra might be an import worthy of consideration. Another mutual friend owned a used car dealership and just happened to have a beautiful '97 twin turbo example from Florida sitting on the showroom floor.

"As soon as I laid eyes on the black curves of the Supra, I fell in love. Not only did it have the aggressive lines and a sleek look, but the power and sound this animal produced had sold me instantly," Chris recalls. It wasn't long before he was driving home in his very own Japanese muscle car. What Chris didn't know was that he would spend countless hours over a span of several years with his car crew, Chii Racing Culture, turning his new ride into a seriously fast street car.

Though it seems like a stretch, there are actually a lot of aspects of a successful muscle car build present in the theme of Chris' Supra. The most obvious of these traits at a glance is the car's exterior. Even though things have been kept very tame when compared to the direction Chris could have taken, don't be fooled—this is definitely one bad Supra. Several items from the car's exterior have been shaved and smoothed, including the emblems, rear hatch spoiler, rear wiper, and radio antenna. With the large factory spoiler removed, this Supra immediately takes on a tough and unique muscle car–like stance. A Wings West front lip and Top Secret rear diffuser help to add subtle touches to the car's appearance without being too intrusive or crazy looking. The only hint of what lies beneath the bonnet comes from a large intake duct molded into the custom Dark Alley Designz headlights.

On the other side of that headlight duct lies the heart of the beast. As you might expect, Chris' Supra is powered by the mother of all Toyota powerplants, the 2JZGTE. The factory twin turbocharger setup has been ditched in favor of a much larger Garrett GT42-76R single turbocharger. The engine's top end has been worked over with a slew of components from Apex and Brian Crower to ensure that everything holds together with the additional jam produced by the larger snail. The 2JZ is known to have a notoriously strong bottom end, so the work on the top end provides plenty of potential for big numbers.

With a big turbo of that size bolted up to the engine, the exhaust and fuel systems need all the help they can get to keep up. The turbo is fed via a massive 4-inch intake pipe mated to the headlight duct we mentioned earlier. Spent gases are forced out of the turbo via an SP 4-inch downpipe, midpipe, and after-cat exhaust system. The fuel system has also been beefed up to meet demand, fortified with dual 255-lph Walbro fuel pumps, an SP fuel rail, and Precision 1,000cc fuel injectors. All parameters and tuning needs are kept in check via an AEM standalone engine management system. Helping the engine bay to look the part, a bunch of factory and aftermarket components have been polished to give the motor that hot rod–esque look.

Now that the inline six-cylinder is putting down big power, the factory drivetrain needed attention. In true muscle car fashion, Chris chose to go with a TSI custom reverse pattern TH400 automatic transmission for his build. Though you might think this is a cop-out, let's be honest—6-speed manual trans Supras aren't exactly known for their stellar quarter-mile times, even when they're making 1,000 hp. The automatic trans allows the power to be put down more efficiently and consistently. A Precision 5000 torque converter and Suburban heavy-duty driveshaft are the final drivetrain components needed to ensure this Supra remains bulletproof.

Hidden behind the dark limo-tinted windows is a fairly factory interior with the addition of a few subtle race car amenities. Most dragstrips won't allow a car this quick to run without a rollcage, so Chris turned to CJM Racing to TIG-weld an S&W eight-point rollcage into the car's cockpit. To keep things streetable, the 'cage has been painted black and wrapped in protective padding. A pair of red Sparco racing seats and six-point racing harnesses keep the drive and a likely terrified passenger securely in place during a blast down the 1320. Finally, a Pioneer in-dash DVD unit was tossed in to keep your eyes and ears happy if the hum of the 2JZ manages to become too much to handle.

With a build as extensive as this, the wheel and tire setup has to match the power and killer looks. A set of three-piece SSR Professor SP1 wheels with custom black powdercoated centers was employed in a double-staggered setup, measuring 18x8.5 up front and a wild 19x11.5 out back—talk about a hot rod–inspired stance! Massive 305/30/19 Continental drag radials transfer as much of this Supra's power to the ground as possible. KYB AGX adjustable struts and Eibach Pro Kit springs are the perfect setup for drag racing, while also adding a mild drop in the process.

In the end, Chris' desire to build a big-power American muscle car has transformed this Supra into a great example of what can be done with some out-of-the-box thinking. So next time you're at a random car show filled with muscle cars that may not be your cup of tea, try to look a little closer and appreciate what you observe. Who knows? You might just be struck by some inspiration for your own build! 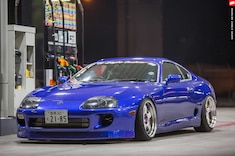