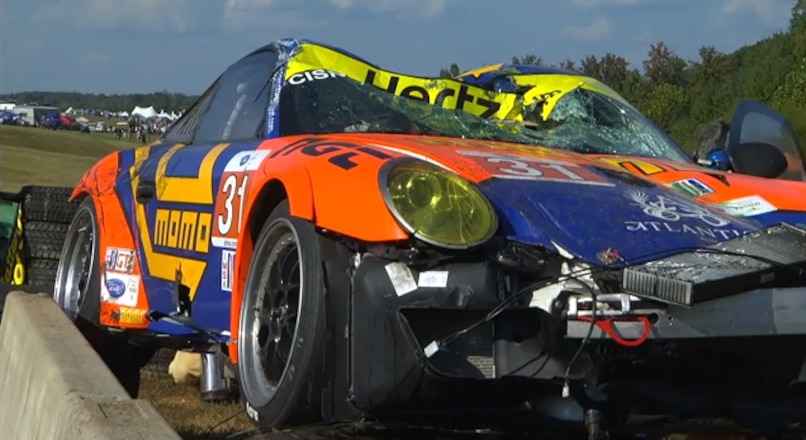 While crashes are nothing to get excited about, you can't help but gasp, cringe and drop your jaw when watching a high-performance vehicle surpass its limits. Motorsports at its highest level is a balancing act between the mechanical limitations of a vehicle and driver inputs. Lose focus for a second or push too hard and a red flag situation can occur.

The five 2013 race crash videos below highlight exactly what can happen when tires leave the road. Almost as astounding as the wreckage is the fact that featured drivers like Brian Gillespie in a land speed Hasport Insight walked away from said incident because of how well a car was built. Let us know which video makes you cringe the most in the comments section below.

Not often do you see a racecar go off track, tumble into the air and land right side up on a tire wall. During an American Le Mans Series Oak Tree Grand Prix at Virginia International Raceway two GT Challenge class Porsche 911s came together prior to turn entry and b-lined off track and into a tire wall. To the surprise of all who witnessed this violent wreck, the drivers and all bystanders left the scene unhurt.

After traveling to the El Mirage dry lakebed in CA, driver Brian Gillespie went out to set a land speed record of 200 mph in his Hasport Hondata Insight. Brian spends much time behind the wheel and also delves into the Hasport R&D program. Just a few months prior, he set a record in the Blown Gas Modified Sports class at 179 mph.

At extreme speed the smallest issue can become catastrophic. A small sway turned into complete loss of control and dizzyingly fast tumble across the white sand. The car was left nearly indiscernible. To the surprise of all involved though the driver escaped with only minor injuries.

Being a huge proponent of safety, the roll cage and Hans device Brian wore saved his life.

The Nissan GT-R is known around the world as many things including Godzilla, and now thanks to this video you can also call it safe. The above video demonstrates why you don't drag race in the rain and just how Japanese engineering saved the driver from serious injury. This crash took place at the DragTimes Unlimited 500+ drag race in Moscow, Russia after a wet road launch sent an accelerating GT-R off course and into a concrete barrier. The event pits high-end tuner and performance vehicles against one another in a mile-long drag race that is than highlighted on the popular DragTimes YouTube channel.

Surprisingly, the female driver stepped out of the wreckage without helmet or protective fire suit. Hold all "girls can't drive jokes" because guy or girl, drag racing in heavy rain is universally a bad idea. Chalk up one more GT-R for the salvage yard.

Driving a Ferrari 458 at nearly 200 mph may sound like a blast, but as you will see in the above video this particular run was anything but fun. Driver Shigeru Terajima lost control of his 458 on the start/finish straight of the Suzuka Circuit during the Ferrari 458 Challenge event in Japan.

Although it may appear as though no one including the driver and corner worker survived, the opposite is true. Both escaped without serious injury while the only thing left of the car was the passenger compartment.

Be forewarned, this crash is the most tragic of all and a reminder of how dangerous the sport of racing can be. 34-year-old driver Allan Simonsen of the LMGTE AM class #95 Aston Martin Vantage V8 crashed on lap two of the 24 Hours of Le Mans race and passed away from his injuries. It was a dark day for the sport.

Despite the tragic circumstances, the team raced on for its fallen comrade. One of the team's remaining cars finished third place between both the LMGTE Pro and LMGTE Am classes.

"Following the wishes of Allan's family, the team continued its participation in the race which was obviously very emotional and difficult for everyone. Both the #97 and #99 cars led for long periods of time but, ultimately, it was the changing weather conditions in the last hours that cost us the victory we all longed for. I'd like to thank everyone who has shown us such support over the weekend and sent the messages of condolence to Allan's family," David Richards, Chairman of Aston Martin commented.