Innovation at Its Best

Recently, I've been feeling like innovation has been harder and harder to come by. There are always new, upcoming builds and trends popping up—but it's all too often that we fall back into the repetition of seeing the same cars over and over again. S2000s are in right now—it's just a fact. We've seen a ton of great Evo and WRX builds lately, but how many are truly "different?" And I can't even begin to count the number of rows of K-swapped civics I see at our local shows. By no means am I complaining. Actually, the majority of these cars are all really great. I sure as hell couldn't build any of them. Though, in some ways I guess it all just begins to feel a bit monotonous. Linh Bui of JER Development, on the other hand, is a completely different story. In fact, Linh's entire mechanical passion is based solely on innovation. Sticking things where they don't belong is what he does best.

Take this 1967 Mini Morris truck for example. Linh is used to prowling around the import side of things—sticking 3-rotors in FCs or RBs in 240Zs. But when opportunity knocked on his door to create something entirely outside of his usual realm, he could not refuse. "This build took a ton of blood, sweat, tears and luck—and significantly more money than it's worth," he states. Reason being? Well, sticking a K20 in a nearly 40-year-old British chassis isn't your usual run-of-the-mill swap. The vast majority of the modifications had to actually be custom built by Linh and his team, from breathing restraints and fuel pump modifications to the entire suspension. On the areas outside of his reach, Linh called upon MiniTec of Athens, Georgia to provide the necessary parts to keep the build moving. Even the entire sub frame is completely custom made from MiniTec to support the beefy K-series.

Yet there's more to this build than just the mechanics of a motor swap. It's been planned out to the T—it has “thought.” Though some may never make it past gawking over the flawless widebody, the attention to detail becomes blatantly apparent for me within the interior. The classic Mini buckets were replaced with a set of one-off del Sol seats to keep the Honda theme going, and the dash has been replaced with an S2000 cluster. It even has the RSX/S2K push start button to complete the package. Showing nothing but pure dedication as he attempts to make this crossbred Frankenstein feel like it has a true mother outside of a test tube.

The funny thing is, where 99% of us would be completely stoked to build a monster of this nature and have it actually run, Linh is still not satisfied—and even claims the project is still a work in progress. Future plans include a turbo of some sort as well as an upgraded interior. There are also talks of an AWD K-swapped Mini Van in the works. We'll just have to wait and see. But for now, I'm thoroughly refreshed.

Linh graciously offered the opportunity to take the Mini truck for a test drive, and I was more than happy to oblige. Without a doubt, this thing is a monster. The seating is cramped, the accelerator will jump with nothing but a feather's touch and the suspension is as stiff as it gets. First through third are definitely a bit squirrely with the torque steer, and hitting the 9k redline was like strapping a saddle on a wild giraffe as I wasn't sure if I was going to b-line it into a wall or take the race. But once I shifted into fifth, everything really started to even out and put me on cloud nine. There's just something about cruising around the SoCal streets in this thing that makes you feel like a total badass. Maybe a sleeve and fedora would complete the picture. OG status. 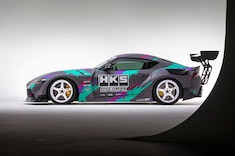 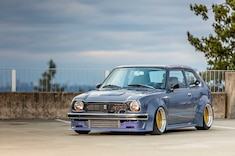 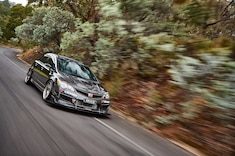