Widebody S14 that's owned and driven by a girl!

Forget about it guys. She's taken! But we can dream... When we first discovered this '95 Nissan 240SX, and then found out that it was owned by a girl, our hearts fluttered. Badass car by a badass chick... Holla! But with all great girls there is a great guy as well. La Bouakham had the help of her other half, Thon Southithong, and together they've created one sick S14.

Right before our shoot with La in her hometown of Phoenix, we sat down to hear her story. We learned that she didn't grow up dreaming about cars 24/7 like many of us. Her inspiration came after a casual stroll through Hot Import Nights. She liked cars but didn't know them inside and out, and didn't own anything worth modifying at the time. That all changed after watching her first drift demo followed by a ride-along with professional Formula Drift driver, Forrest Wang. That ride changed her life because before she knew it, she was looking for a 240SX to buy. Weeks later, voila! This S14 became her first project car. 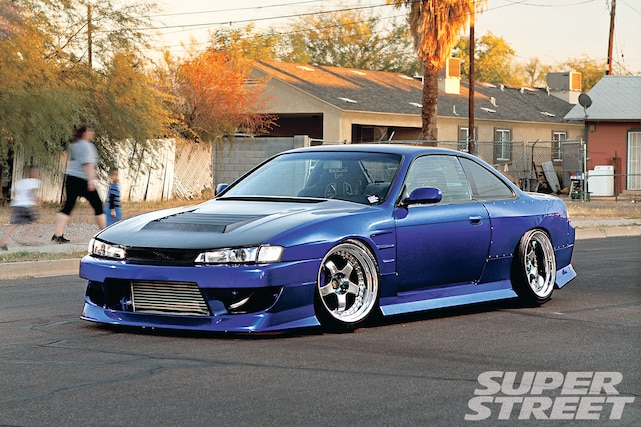 "The whole goal was to make it a street legal drift build while keeping it clean," La told us. Street legal, drift and clean don't always go hand-in-hand but La's done exactly that. From the start, the car was a blank canvas until she added a front-end Kouki conversion, carbon hood and a DMax widebody kit giving the 240 its aggressive drift style. All the aero pieces were installed in her garage before the car was dropped off at local body shop Intense Power for a repaint in sexy Royal Sapphire Pearl—a factory Toyota Supra paint color.

From there, the car was slammed on coilovers and given all the necessary suspension bits from ISIS for a stiff chassis which included tension rods, rear control arms and more. The front section of the chassis was also stitch-welded in anticipation of future drift abuse, which La plans to do after our photoshoot and a few more shows.

Underneath the fenders, La went with the tried and true Work Meister S1 wheels in the Burning Black finish. The dish on these rims is massive and a perfect complement to her ride's theme.

Touching on the interior, the stock seats were ditched for Sparcos while accessories like Takata harnesses and a MOMO steering wheel give the cockpit a track-ready feel. La plans to add a rollcage and possibly strip out all the panels and back end once she starts drifting, but for now she wants to retain a full interior for comfort.

The engine bay came last and pays homage to La's ride along with Forrest Wang, who drifts a 2JZ-swapped S13. She followed suit with another twin-turbo Toyota engine, the 1JZ. This particular motor was taken out of a JDM Toyota Chaser along with the five-speed manual. The entire transplant was performed by Thon in her garage, and also required a custom engine harness, exhaust and downpipe built from scratch.

While the turbos and internals are stock, she's actually pretty happy with the power and drivability of the car. The torque curve is linear, compared to an SR20DET making the same power, plus it sounds glorious!

We know this S14 is simple compared to many S-chassis builds in the past. But this build has great theme while also done on a budget. It's also planned out and owned by a girl who didn't expect she'd ever build a project car five years ago but now owns one of the sickest, street-driven, drift-ready 240SXs in the U.S.

Thanks You My other half and partner in crime Thon Southithong; Kyle Onzuka and Tommy Vonn for pulling late nights when we had deadlines to meet; Chris Smollack for showing us the ropes of fabrication; my good friends (you know who you are) for giving us a helping hand; my awesome roommate Nookie Somsanuk; Oliver Butrus and Han Wong at intensepower.com; Brian Fox at Takata Racing; Gilbert Valdez at Valdez Auto Body; Vitaly Spokin and Brianna Pebbles at AceUp Motorsports; Mike Valera at mvphoto.net; Dax Rodriguez and Justin Derendal at streetsweepergang.com