Swap a K-series in everything!

The millennium's flavor of choice for Honda swaps was always the perennial B series and the big-block H-series. Times, they do change, and the B- and H-series swaps, although still used regularly, have started to slow bit, taking a back seat to the new kid. Richie Feliz of New York City was there when the H was king, and wanting to stay ahead of the curve, he decided to take on the K family.

Richie has been turning wrenches for years and like most guys coming up in the late nineties, his dream Honda was definitely not the "auto-tragic" Accord he'd been rocking. He recalls "I always wanted an EG coupe with a B-series, everyone I knew had one, it was the car to have." After a series of unfortunate accidents and flipping cars he ended up back in a CB7 nearly a decade later, although this one had seen better days. He adds, "It was in need of some help. It had the typical northeast quarter panel rust and it had damage to both passenger doors ... it was also in need front and rear brakes." To address the obvious body flaws and rust, Richie picked up a donor car to pull clean panels and doors from. The "new" donor car also happened to have full black interior that Richie promptly swapped from dash to door cards. The OEM brakes were tired so they were ditched for a 5-lug conversion using parts from a newer generation V6 Accord. In front of the 11.1-inch rotors were DC5 ITR wheels.

Before buttoning up the new suspension, Richie removed the tired suspension and installed a set of the then brand new Function/Form Type 2 coilovers and upgraded sway bars. Anyone who lives in a road salt state knows that once the rust starts, there is no stopping it, so next on the list was pulling the quarters off of the donor car and welding them to the project. Once complete, a coat of Platinum white pearl was laid over the car, a color only available in the UK on the S2000. In search of more power, Richie installed a JDM H22 and APEXi exhaust system. For the next year, Richie hit every meet he could up and down the east coast while stacking up a slew of rare JDM bits like his one piece headlamps. At this time, Richie picked up the pride of his collection, an ESP 3-point shock tower bar. He adds, "This was the first bar ever made for the CB Accord. Back then if you wanted a 3-point strut bar you had to go custom." Richie still has the bar today and luckily it still fits with his newest setup.

After some time Richie grew bored and hit the forums and it wasn't long before a West Coast member mentioned that Hasport had just released mounts and axles for the K-series to CB chassis swap. At that point he knew he had to do it. "Unlike the Civic/Integra platform which has always had massive aftermarket support, I was faced with a challenge. The only things provided for me were mounts and axles, everything else had to be outsourced or custom made." Richie got right to work on sourcing the parts, starting with a K24 and accompanying six-speed transmission that he'd arm with a Competition Clutch and ACT flywheel. Some parts, like a DC sports K-swap header for a civic and a Mishimoto radiator from an EP3 were modified to properly fit his chassis. Others, like the Civic RBC intake manifold, were of course a direct bolt on.

Hasport provided the mounts and axles for the swap but from there it was essentially uncharted territory. To help ease the process, and clean up the bay, Richie opted to remove all of the engine accessories like power steering and AC, and relocate the battery to the trunk to ease in the rewiring. Wiring the entire job was a completely one-off process at the time, so Richie flew in his friend Oscar from Florida to help finish the delicate procedure. A new heart called for new rollers so the DC5R wheels were replaced with a set of 17-inch Regamaster Evo's and with that, Richie put a fork in it because his CB7 was officially done. Richie's new cruiser can be seen up and down the East coast, and come spring, will get strapped to a dyno for the first time, keep your eyes open! 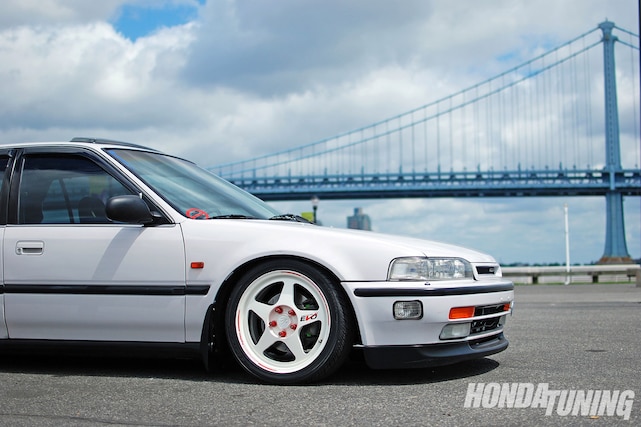 Inspiration For This Build
Setting an Accord apart from the rest

Today K-swaps in any Honda are pretty common, but a K-series Accord is still pretty far from standard. Richie made his job a bit easier by removing the AC, ABS, and power steering, but that was only the start of the DIY project. He states, "Companies like Hasport wanted my engine harness for like two months to retrofit it in, I needed this car to drive, so that wasn't going to fly." Not to mention the fuel headaches. "The fuel system has to be completely redesigned, which at the time, no one made a kit for." Thankfully for Richie, custom fuel and wiring was something he could handle, but making axles and mounts was next level stuff, and that's where industry leaders like Hasport came in. The only other hurdle Richie tackled was having a custom made throttle cable, which by his own admittance, was the hardest part. "What size wire is that? It's not like you can go to the store and buy it by the foot." In the end, he was able to overcome the adversity, but he's not giving away any secrets ;). 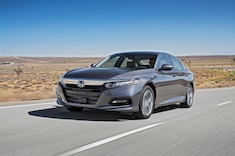 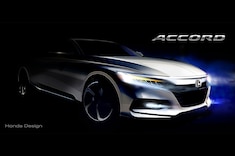 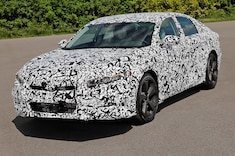