Too often, we're presented with project builds that are perfect from afar, but crumble upon closer inspection because of a lack of cohesiveness. However, this E90 M3 is stellar from afar and even better close-up, making it an easy decision to feature in the magazine.

The owner of the pristine BMW M3, Eric Kuehn from Bel Air, MD, shared his thoughts on the creation of such a gem. "I've seen many all-out racecars with huge stereos, or show cars with a rollcage, but I wanted everything to flow," he said. "I wanted to ensure that everything worked in perfect unison."

You see, Kuehn is something of a perfectionist and couldn't live with anything short of, well, perfection. So after owning a 350Z he decided to jump into the Euro scene. He started with a low-mileage Alpine White E46 M3 and modified it extensively. When he was ready to move on, he turned his sights to the E90.

As fate would have it, a friend had been leasing a 2008 M3 and decided the payments were too much, and offered the car for the residual. The lump sum was a killer deal and so Eric became the lucky owner of a four-door rocketship.

Within two weeks Kuehn scratched the gearhead itch with H&R lowering springs, and a sports exhaust. "It was the perfect daily driver but the upgrades only ignited the desire to modify it more," he confessed.

Fortunately, Kuehn had enough sense to thoroughly plan the build, rather than impetuously buying random parts. And this allowed him to ensure the project had a predetermined direction that would keep the M3 usable. "I wanted to build the ultimate daily driver, where nothing would be out of place. Everything would be added for a purpose, with no individual mod stealing the show," he added.

With that said, if you had to pick a star performer it would probably be the ESS Tuning VT1-550 supercharger system, particularly with its custom-painted intake manifold. It also has a smaller pulley and Gintani cat-less X-pipe feeding into a Meisterschaft GT muffler that, when put to the test, was good for 590hp at the wheels on 93-octane fuel.

When the lowering springs weren't enough, Kuehn added KW sleeve-over coilovers along with RD Sport sway bars. This improved the stance but Eric wrestled with no less than four sets of wheels before he found the perfect combination. As it happens, these were 20x9.5" front, 20x11" rear Morr Competition MF52 three-piece forged wheels wrapped in Falken tires. 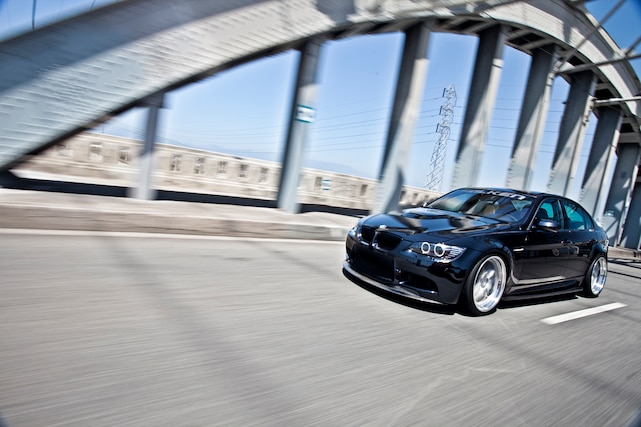 "I don't make any qualms about it; the car was built to be driven in all situations except the track really. The 20s are probably too big for competition use but look great on the car, especially with the brushed matte centers and polished stepped lips," Kuehn explained.

And the owner isn't the only one who thought the car looked good on these wheels. It appears that Morr Wheels felt the same and displayed it in their booth at Bimmerfest West 2013, which is where we stumbled across it. They had shipped the car from its East Coast stomping grounds to highlight the fitment and show attendees what a great job Eric had done. We had to agree and arranged to photograph it after the show.

The wheels and supercharger demanded some exterior upgrades, so Eric began with a Mode Carbon GT1 lip, color-matched grilles and Platte Forme carbon side splitters transitioning into a Vorsteiner double-sided carbon trunk. The latter received LCI tail lights, while he also added ONEighty headlights up front. These feature dual projector units and additional LEDs inside billet housings. "I can't say enough about the headlights. They have CNC'ed internals that add a second projector and even an LED that blinks when the alarm is set," Kuehn said.

In his continued pursuit of perfection, Eric couldn't leave the exterior at that. "BMWs have nice paint, but are known for orange peel, so I had the entire car wet sanded to remove the peel and bring out the shine. It looks like a totally different color now, and the shine is so deep," Kuehn told us.

While many people often neglect the interior, a car this special should also be amazing on the inside - a notion that Kuehn subscribes to as well: "I had a pair of Recaro Sportster CS seats mounted on Macht Schnell frames and wrapped in OEM BMW Bamboo leather. It could possibly be my favorite mod on the car since I've never seen another one like it," he added.

The same hide was wrapped around the dash and console, rear seats and door panels to appear as if they were BMW Individual pieces.

The driver is bombarded with information thanks to the LED display on the BMW M Performance steering wheel. However, there is also a P3 Cars electronic gauge in the driver's vent plus three Stack gauges in the center console.

"The Jehnert custom door panels are insane. They look factory and most people don't know they're hiding a ton of doors speakers - it's awesome," Kuehn said.

You didn't assume this BMW M3's sound was limited to its intake and exhaust? Kuehn was hell-bent on ticking every box, so has a trio of Helix Competition amplifiers powering Rainbow Audio component speakers that include eight mid-range drivers and a 10" AmBoss sub. A Helix processor adds clarity and the major equipment can be seen in the trunk enclosures.

"It may not be the craziest car out there, but I built it to my definition of perfection and enjoy it every chance I get," Eric explained. In fact, he's driven more than 40,000 miles in less than three years, so clearly takes every opportunity. "If it's sunny for seven days, I'm driving it all week. The only time I don't is when the weather is bad. Otherwise, I can't get enough of it."

And what about its future? "I've got some big plans, including a color change, different wheels and even bigger brakes. I've decided to do more because if I sold it, I couldn't replace the M3 with anything as fast, as capable and well-rounded," Kuehn concluded.