Brute American Power Combined with One of Japan’s Finest Chassis

It’s a brave new world out there in the land of engine swaps. As it turns out, B16As in Civics aren’t nearly as awe-inspiring as they once were and RX7 rotary engines are being replaced by American muscle. Displacement trumps all, or so it seems, and there really is no better place to get it than with General Motor’s family of eight-cylinder LS engines.

Fitting a small-block V8 under the hood of whatever it is you drive will never be easy, though. Deciphering between all of them and settling on the right one can be just as hard. Hoang Dao learned all of this while ditching his 1994 Mazda RX-7 13B-REW for his own V8 engine swap. The LS1 is the obvious choice for would-be swappers like Dao who seek eight-cylinder brawn all nestled into a proven, realistically priced package. It’s true, there are exponentially more powerful LS engines, but at 350hp for somewhere around two-grand, few make as much sense.

Those who designed and engineered Mazda’s famed, third-generation FD RX7 would likely shed tears were they made aware of the sort of engine swap shenanigans that have since taken place—justifiable tears if ever there were some. Mazda’s sequentially turbocharged rotary engine was one of the best powerplants to come out of Japan during the 1990s. When assembled by somebody who understands rotaries and with the appropriate parts, big power can be had. But no matter how bad you are at math, 1.3L will never equal 5.7L, which is exactly how much GM’s third-generation LS engine displaces, resulting in about 100 more horsepower than the 13B and a whole lot more torque. For perspective, the LS1 lays down exactly 365 pounds of it at 4,400 rpm—right about the time the 1.3L rotary begins working itself past the 200lb-ft mark. It’s those types of numbers that have made LS engine swaps and the Mazda RX-7 the sort of not-so-strange bedfellows they’ve become.

But 350hp and 365lb-ft of torque isn’t always enough, which is exactly why Dao went on to fit a ProCharger blower to the small-block V8. At a measly 7psi and with few supporting mods, 545hp was registered. The gear-driven, centrifugal pump moves air through a front-mount intercooler from GodSpeed before being sent out the other end by means of a pair of Kooks headers customized to Dao’s chassis. Probe Industries forged pistons keep the small-block from falling apart inside and a Centerforce clutch and Cusco limited-slip differential make sure that all of that torque is transmitted to the back tires.

The number and variations of GM’s LS engine aren’t few. Early LS1 iterations yield as little as 305hp while the late-model LS7 pushes out another 200. In between both of those, there are as many aberrations as you think there are. Dao turned to the fifth-generation, 1997-2004 Corvette for his—the first year that Chevrolet admittedly and coincidentally took styling cues from cars like the FD RX7, among other mid-1990s Japanese greats.

The list of under-hood mods may read like an excerpt from your uncle’s V8 power-building handbook but the remainder of Dao’s FD RX7 is the antithesis of American muscle. Staggered CCW LM20 wheels and JIC Magic coilovers are positioned at each corner. Also outside, the North American-spec front end has been updated with the later-model, 1999-2002 version, and a pair of side skirts along with an accompanying rear bumper were added from Duraflex before the entire chassis was resprayed. Updates remain minimal inside and are limited to Status Racing bucket seats and a Personal Grinta steering wheel.

It’s true that Dao could’ve made due with what Mazda RX-7 engineers saw fitting for the RWD coupe, but arriving at the same torque-per-dollar ratio that the LS1 affords would likely prove exponentially more costly and perhaps more challenging. Mazda’s engineers may weep for those FD RX7 13Bs discarded by the wayside, but eight cylinders worth of torque never lies and has a funny way of washing tears away in a hurry. 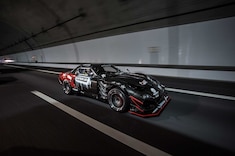 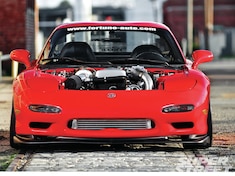