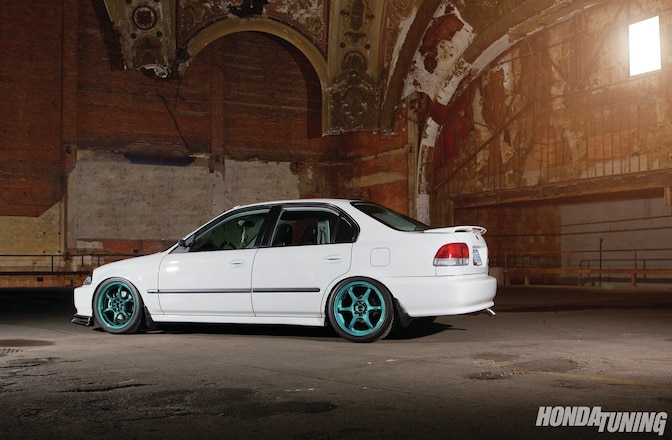 When Suraj Bhamra took the keys to this '98 Civic sedan and began commuting to and from high school with it, he wasn't exactly enthused. In all honesty, he wasn't a fan of how the car looked, nor did he appreciate its automatic slushbox. Additionally, the Camaro SS that he'd been eyeing for quite some time, parked right down the street, had a for sale sign on it, almost mocking him as he drove by it every day. His family had purchased the sedan as a workhorse, serving as his sister's everyday car and occasionally his brother used it for long hauls relating to his job. When Suraj hit the big 16, his parents had two hand-me-down options to choose for him: a Chrysler Sebring LXi or the Civic. He adds, "Originally I wanted the Sebring because my brother did some 'cool' mods to the car like chrome wheels, headlight covers, window tint, and a bendy antenna, etc. But ultimately I was given the Civic because it had fewer miles on it and my parents felt it would be more reliable." After some random online surfing, Suraj landed on a website full of body kits, and unknowingly, the modification seed was planted. 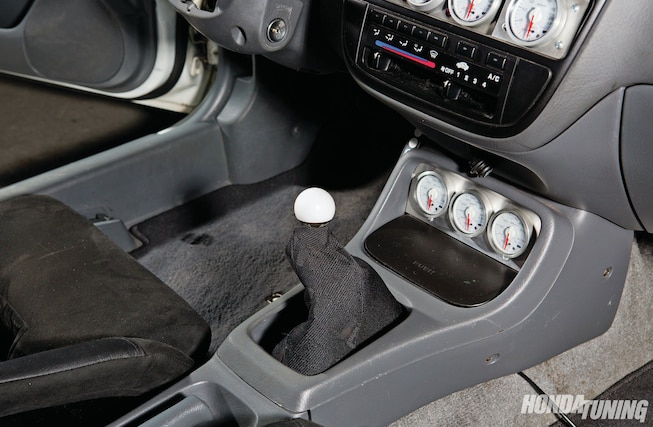 "My dad's friend's son was into Hondas and had a pretty clean silver EK hatch. My dad heard about the hatch, and being a car guy, decided he would let me do some visual mods to the car." The sedan was dropped off where the family friend proceeded to add a body kit, Altezza taillights, generic coilovers, Enkei wheels and had everything color matched. He adds, "I thought the car was the sh*t in high school and I won Best Car, which made me think I was super cool. During this high school 'ricer' phase, I stumbled across Superhonda.com." The focus on complete suspension and engine builds intrigued Suraj. So much so, that he'd jump on the tech forum the instant he arrived home from school everyday to read and learn more about his newfound passion.

With so many swapped Hondas floating around on the web, the urge to install a B or H Series engine haunted Suraj, but being a high school student on an almost nonexistent budget meant that a swap was completely out of the question. Instead, a Flowmaster muffler was matched to custom piping at a local exhaust shop and made the automatic D16 louder, but not any faster. 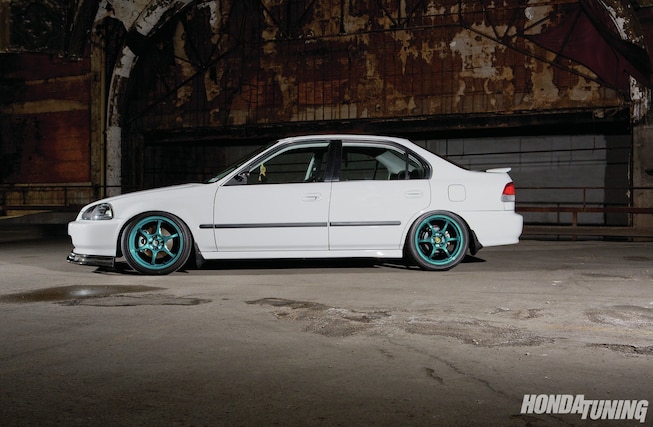 It was about this time that Suraj had graduated high school and was heading into the next phase of his life. He adds, "It was time for college and the car, which I drove five miles to high school in, became the car that I dragged to and from college. I would change the bumpers and wheels [in the winter] back to stock and haul everything I needed to and from school. The car wasn't particularly neglected; it was just kind of a 'dark age' for the build. In my junior year of college, I landed an internship and began working part time." A steady source of income and the nod from his parents to start using their 300M as a daily driver meant that Suraj could once again pick up the build, but this time he'd be doing the modifying himself. Most would undoubtedly reach for some sort of DOHC swap, but Suraj shook those thoughts off entirely after finding his way to D-series.org and learning all about the potential of a SOHC turbo setup. He removed the original engine in his garage and sourced a new block, which was fitted with Suzuki Vitara pistons and custom length FJ Distributor rods complete with ARP hardware. A Bullseye T3/T04E is connected to a custom-built Revshift exhaust manifold and downpipe combo. Bisimoto's 1.2 cam is joined by a complete Supertech valvetrain kit and AEM Tru-Time adjustable cam gear, while engine management is handled by Hondata's S300. 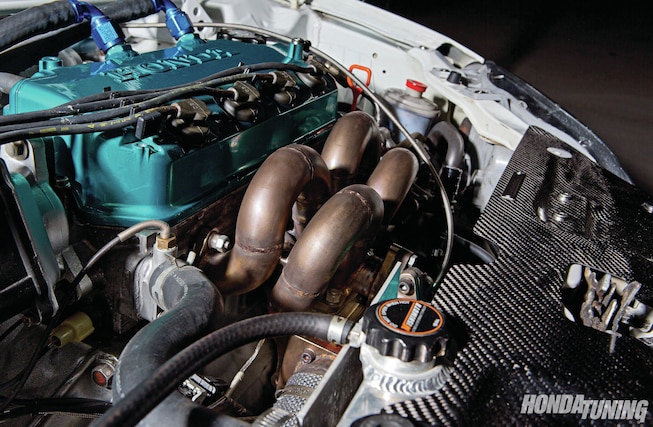 The SOHC build was straightforward for the most part, with no real snags along the way. That is, until it was time to fire it up, which resulted in a puddle of oil on the ground when a cam seal failed to make its way into the rebuilt head. That ordeal was then followed by countless attempts to nail a proper base map and once it was finally dialed in correctly, a few more problems showed up uninvited, including an issue with the turbo and way too much smoke. Even after realizing he'd plugged the black box on the back of the D16 block, Suraj says the car continued to smoke between shifts, which is oftentimes a sign of bad valve seals. Off came the head so Suraj could replace the seals in his garage, while the turbo went back to Bullseye to cure a bit of shaft play, and eventually everything was ready to be bolted back on. He adds, "There were some additional problems like the GReddy boost controller not playing nice with the Hondata, a few sensors for the gauges dying, etc. Nothing major, so the next few months were spent just enjoying the car." 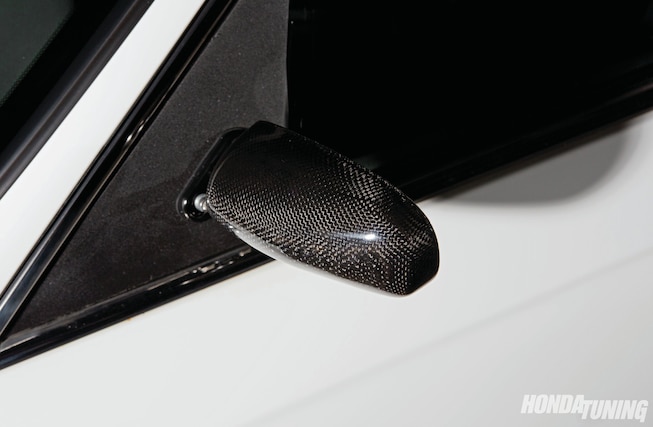 Content with the engine and turbo setup on the road, Suraj turned his attention toward the exterior and interior. He'd had his share of, shall we say, gaudy upgrades in high school, but having learned quite a bit along the way, he wanted a style that he wouldn't regret when looking back 10 years from now. Thin OEM JDM side moldings were installed along with a Seibon carbon-fiber lip and MRacing mirrors on custom baseplates. Inside the cabin you'll find a set of Corbeau seats and Crow harnesses mounted to a Revshift harness bar, a MOMO steering wheel, and a slew of GReddy gauges.

Some might call it a chance encounter, while others might chalk it up to fate. What started as a hate/hate relationship with a family hand-me-down resulted in the development of a dedicated enthusiast who learned everything he could about his car by simply taking a hands-on approach with the aid of some very resourceful forums. 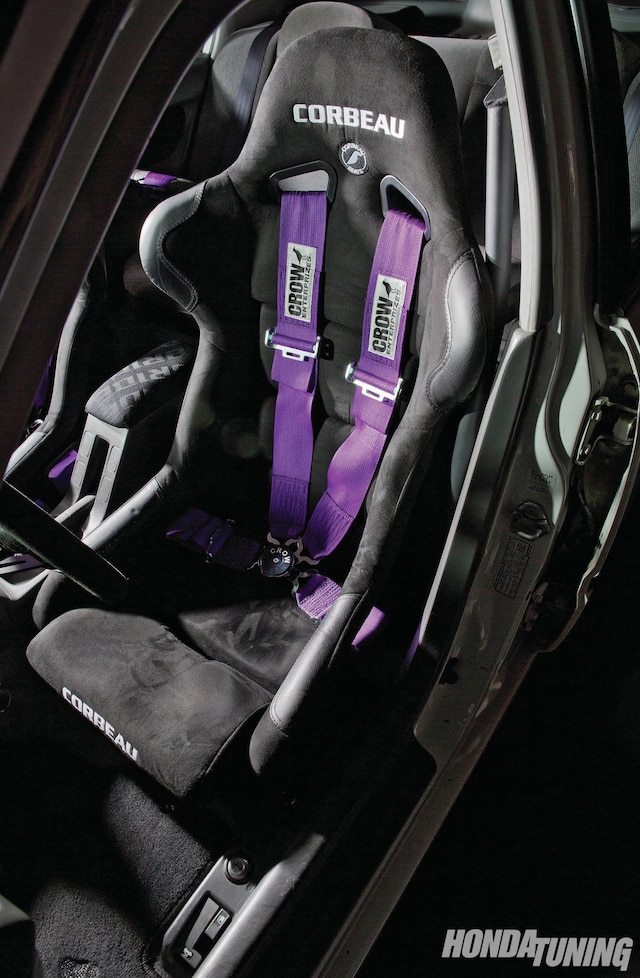 Photo 9/14   |
Comfortable yet purposeful is the sedan’s cabin.

Props
Russell Culver at Dead Hook Tuning, my mom and dad, Brian at Baohouse Tuning, Steve and Brian Engel, the guys over at Speed Industry, Greg at Go-Autoworks, everyone at D-series.org, and the guys at Xceedspeed.com

Inspiration For This Build
Wanting to do something a little different (sedan, SOHC, etc.)

Future Build
Currently building an LS1 240SX, but I want to return to my Honda roots in the future

No Stone Unturned
Having touched on the engine, interior, and exterior changes, Suraj went into the wheelwells and under the car for some reconditioning work. Removing the majority of suspension components, he had everything powdercoated black. As he was about to bolt everything back on, he realized the factory hardware was rusted and worn, in dire need of replacement. All-new OEM nuts and bolts were ordered for a fresh start. From there Suraj scrubbed the belly of the Civic to remove the years of road grime, weather, and abuse, then sprayed the entire underbody with Eastwood's Rust Encapsulator and bolted everything back together.

Honda Tuning
Market Watch: Acura Integra Type R
What does it take in this day and age to get yourself behind the wheel of a legit DC2 Integra Type R?
Rory Jurnecka – Jul 31, 2020

Honda Tuning
Shots Fired! Acura TLX Type S Power Numbers Are Official!
Acura has released the official power numbers of the 2021 TLX Type S and they are far more promising than what the naysayers would leave you to believe.
Rodrez – Jul 30, 2020

Honda Tuning
1990 Suzuki Swift - Fast Times DownTime
A lot can happen in 7 years and Kevin Stittle's time-attacking Swift GT proves it having gone through an amazing transformation since we last saw it.
David Pratte – Jul 29, 2020

Honda Tuning
Last of a Dying Breed - The Only 2021 Model Year Cars Available with Manual Transmissions
For some there's something satisfying about changing gears yourself that can't be replaced with fuel economy, launch control, or quick shifts. That's why we put together this list of 2021 cars you can still buy with a stickshift.
Duncan Brady – Jul 29, 2020 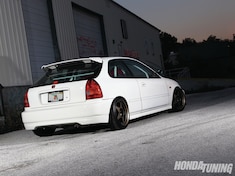 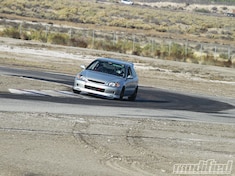 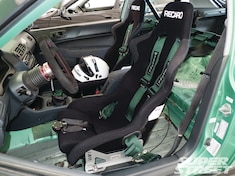 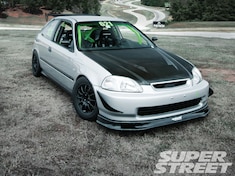