Transitioning from small-block domestics to Honda land led to a drag record of 8.46 at nearly 179 mph. 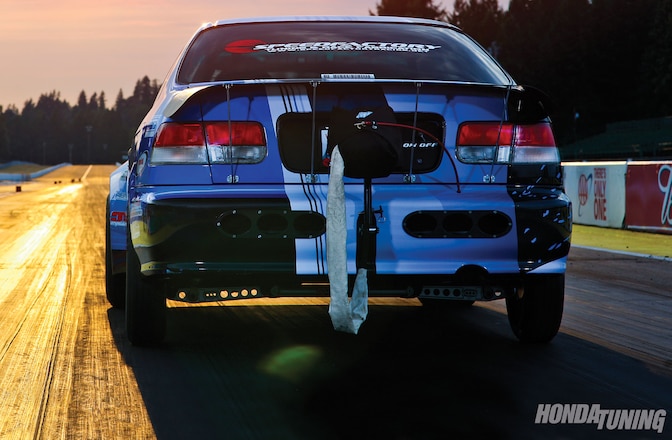 Cole Marmon isn't apologetic of his being raised among a muscle car family, of owning eight Ford Mustangs, of, until four years ago, having never owned a Honda. He needn't be. A collection of turbocharged and supercharged ponycars and a family heritage amuck with drag racing and quality time in the pits at a ripe age makes sure of that. But transitioning from all of that—from a life of blown eight-cylinders and even a spell working alongside drag racer and eight-time NMRA champion John Urist—to modifying a decade-old Honda Civic Si he'd acquired for a little cash and nitrous kit is, by all accounts, just marginally peculiar.

"The honest-to-God truth," Cole says, "is that I was absolutely blown away by the simplicity and reliability of these [Hondas]. I wanted to know what they were all about." Unfamiliar territory they weren't necessarily to Cole, though. He'd already developed a relationship with Tacoma, Washington's SpeedFactory as well as with a number of the region's Honda loyalists. "When I originally brought up the idea to the guys at SpeedFactory, I honestly don't think they thought I was serious simply [because] all I'd owned was Mustangs," Cole tells of the Civic drag car's beginnings. "[That] earned me plenty of grief, especially when there were a handful of 500-700hp Honda street cars [the owners of which] were all really good friends of mine." The transition played out much like you'd expect, though, undoubtedly not at the expense of at least one predictably derogatory punch line aimed right at Detroit, but once all of that settled down, the work began.

Lucky for Cole, he already had close ties with SpeedFactory, whose reputation for assembling and racing some of the globe's quickest Hondas precedes them. Cole could've spent the next 10 years forgetting everything he knows about Ford's modular engine family and 9-inch rearends in hopes of mastering B Series engines and double-wishbone suspensions, but he didn't. Instead, he commissioned SpeedFactory to come along for the ride. As it turns out, his Honda Civic is better for it, clocking a 9-second pass at its second outing. Generating single-digit times wasn't as uneventful as you think it was, though. While debuting the car at a local test-and-tune—which was, incidentally, Cole's first time driving the Civic Si—a preexisting hoodpin failed, launching the Civic's carbon-fiber bonnet into an array of carnage that cracked the sunroof and windshield and mutilated the roof skin, a door, and a mirror. After the 9-second pass just two weeks later, a rod decided to poke its head out of the 2.0L engine block. "All I wanted to do is drive a front-wheel-drive car for the first time," Cole says of the unfortunate series of events that 2011 wrought. "But, hey, that's racing, right?"

Indeed. Which is exactly what prompted the Washington state native to not list the Honda Civic Si coupe on Craigslist in 2012 but to seek consistency and even quicker timeslips. A new three-piece front end complemented the freshly painted exterior and heavy-duty axles paired with a dog box transmission led to a 9.16-second pass early in the season—the second quickest of the True Street class Cole's Civic was classified within. The entire package was uncannily simple, though, despite what others might have you believe. Underneath the hood, a completely stock B16A cylinder head sat on top of a block that Cole says was just a "run-of-the-mill combo." By season's end Cole was determined to return the following year with something even better. Racing got serious in 2013 as did the relationship among him and the team at SpeedFactory and the car's new title sponsor, Vibrant Performance. An overhaul of the entire car led to regular 8.7-second passes and a Sport Compact Fall Nationals victory later in the year along with a trio of world records set during the same weekend. Cole: "[It] was incredible." Following Fall Nationals, Cole and company set out for the World Cup Finals where he and SpeedFactory would really make history. In the car's first qualifying pass of the weekend Cole broke the world record, posting an 8.50-second pass. Three subsequently quicker passes finally culminated into a best-ever 8.46 at nearly 179 mph—a record that continues to stand as of press time.

Despite the Honda Civic victories and the records, the transition from American cubic inches to high-rpm forced induction wasn't as easy as you think. "I must say, one of the most difficult things for me to learn was to keep my foot on the floor," Cole says, referring to that moment when a front-wheel-drive car begins to lose traction on the dragstrip. "Drag racing nothing but rear-wheel-drive [cars] my whole life, my body was 100 percent wired to pedal it when the [tires] spun too hard, which yielded some funny passes [in the Civic] at first." Funny or not, the truth is, without SpeedFactory's help Cole likely would never have accomplished all he has. "SpeedFactory coached me through some of the basics, and before we knew it, we were cookin'."

"I was hooked at this point and there was no denying it," Cole says of how he felt following the car's first 9-second pass. "I love the feeling of Third and Fourth gears when the track is actually there and you can straight-up just plant the power. It's unreal," he says. And about that muscle car heritage and long list of Mustangs, despite however fast the Civic may get or whatever sort of notoriety it may have afforded him, Cole's still proud to call a trio of them his.

Inspiration For This Build
SpeedFactory Outlaw and All Motor Cars

The SpeedFactory Connection
"Every time we went out, the car went faster, and as soon as [we] thought it was tapped out—boom—the damned thing would pick up another half-tenth. By the middle of the season, we had everyone talking. The car had performed beyond most of our expectations and we knew it was only going to go faster. Before I go any further, I need to make something clear: I have the best race team supporting me in the industry. [SpeedFactory] is absolutely incredible and they work their tails off in order for [me] and the car to make it down the 1320. But it's not all hugs and celebrations; one thing that I believe contributes to not only the car's success, but also our team's success, is that there's no BS. You make a mistake and you're going to be called out on it. That's honestly something I feel makes one of the [biggest] differences in terms of continued progress and continuous improvement. I'm beyond blown away, and I'm absolutely blessed to be a part of such a successful race team that truly has the kind of attributes and dedication it takes in order to be successful and innovative in this sport." —Cole Marmon 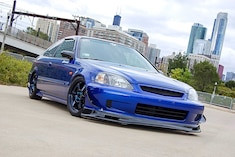 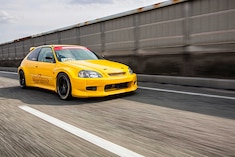