This has been a long time coming—11 years to be exact. In this time, Ferd Natividad has gone through a full range of emotions with his '94 Acura Integra—he's loved it, hated it, forgotten about it and at one point, nearly trashed the DC2 altogether. Two years ago, Ferd was just crazy enough to think about destroying the shell because he couldn't fathom the idea of someone finishing what he started over a decade ago. Hence, the Acura Integra's nickname "ATS*Kranky" is an appropriate one. Ferd is a founding member of NorCal's famed Honda car crew, ATS Garage, and the temperamental nature of this Integra makes it "Kranky" (cranky). You wouldn't think that this Integra was such a pain in his ass because at first glance it appears to be as close to perfect as you can imagine. However, it is definitely not without its faults and headaches.

"The car started life as a black LS slammed on Mugen RnR wheels back in 2003," Ferd explains. "I had the DC2 resprayed a goldish/bronze tone a year later but still kept it very mild because builds just weren't that intricate at the time. More events started happening in NorCal and one event in particular, JDM Theory, really took off. Everyone started doing more to their cars and things got more competitive. I bought a Rev Hard turbo kit to make the Integra a little quicker, but what my friend Fred Chapman and I really wanted to do was tear the entire car down so we could build it from the ground-up. Fred sold me a '91 Civic so I could have a daily driver while we rebuilt my Integra, and he bought my LS motor from me to put into his own car. He also bought my brakes and I sold my turbo kit to my other friend so the Integra was essentially a rolling shell. My game plan was simple; I just wanted to put another motor in, do a five-lug conversion and install an entire JDM Type R clip. As you can tell by now, it didn't exactly work out the way I planned."

Back in the mid-2000s, the premier tuning shop in Northern California was RedZone Performance. It was such a big name in the Honda community that you would be hard-pressed to find a Honda from that area that didn't pass through RedZone. They did it all so Ferd trusted them with the task of converting his Acura Integra to right-hand drive. Being as busy as they were, he didn't rush them and so they worked on the car sparingly. Ferd occupied the downtime by tinkering with his EF hatchback. What was supposed to be a side project ended-up being a full-blown build. Eventually he got his now-RHD Integra back from RedZone, but it was put on the backburner while he continued his EF.

The DC2 Integra needed paint but since his funds were going into the Civic, he needed some financial assistance. He began seeking out a paint sponsor and found one with a body shop called Garage Inc. Typically, the thing with having sponsors is that you don't dictate when the car gets finished. Jobs that generate income for the business come first and so the Integra just sat. As Ferd explains, "They would do a little bit of body work here and there but then there would be long periods of inactivity. They just kept lagging and continued to make empty promises. There was a point when I would have rather paid and taken the car somewhere else. The car was half done so I just wanted them to finish it. I even sold my EF so I could fund the rest of the build. Months turned into years and I eventually bought another car and started another project."

The new project, an EG2 del Sol, was also built, featured and later sold before he finished this DC2. "Seriously, a couple years went by before I eventually got my Integra shell back." Ferd told us. "It took so long that I was actually surprised when I got the car home. You'd think that it was a good thing to get it back but I really started to doubt this project. It just seemed like there was nothing but bad luck with this car and with all the down time, I just got sick of waiting. I was at a crossroads; I could sell it because I had tons of inquiries, but I just couldn't picture someone finishing this project. It literally made me sick to my stomach. I wanted to crush the car because I didn't want to deal with it anymore and didn't want to worry about seeing someone else have the satisfaction of finishing it."

Photo 4/34   |
One-off custom Mil-Spec chassis harness created by Ryan Basseri of Rywire that features a quick-disconnect plate on the firewall.

The turning point came when he acquired his K20A2 engine from Dan at R-Crew Racing. Seeing the heart of "Kranky" really gave him a new sense of motivation. Getting the parts to get the swap running became an issue since there was a particular way he wanted the engine bay to look. The negative thoughts came creeping into his head once again but his friend Fred Chapman became the voice of reason. He was with Ferd during the entire ordeal and wanted to see the build come to fruition as much as anyone. On a random night, Fred showed up at his doorstep and they installed the K-series that same evening.

Once the heart was transplanted, the duo was able to execute the cosmetic side of the engine bay in true ATS Garage fashion. As a Honda aficionado, you should already be familiar with their work, so it really needs no introduction. From the parts selection, color execution, to the smallest of details like the wrinkle black finish of his brake booster, you can tell this is a signature ATS Garage masterpiece. Everything was starting to fall into place until it came time to get the engine running. After all, it wouldn't be Kranky without some sort of dilemma. Ten years of build-up in the fuel tank and lines turned-out to be the issue. The metal lines were so corroded that the lines inevitably turned soggy and prevented fuel delivery to the engine. To make the Integra a little less "Kranky" the fuel tank was hot-tanked, cleaned and new fuel lines were plumbed.

"I'm happy to say that the car fired right up after that. We even got the car tuned by RedZone Performance and it made good power. This car has been with me for so long that I'm glad to see it finally completed. There were times when I lost my patience, nearly gave up and built other cars to occupy my time, but this DC2 Acura Integra will always be special," he added.

Despite us airing out Kranky's rough past, Ferd's build is honestly one of the best we have ever seen. It instantly captured our attention when it first debuted and we knew it was the perfect choice to grace the cover of this year's Honda Issue. ATS Garage builds are top tier and their builds continue to evolve with the times, almost to the point where they are the ones that set the precedent while still holding true to the old ways in which Hondas are built by a group of friends in tiny one-car garages.

Photo 6/34   |
Beautiful K20A bay with all the right parts and details—Hayward Performance ITBs, A’PEXi coolant overflow tank, custom oil breather assembly and much more! R-Crew Racing K-swap header. With the motor tuned by RedZone, it made a hefty 233hp!

Photo 7/34   |
Beautiful K20A bay with all the right parts and details—Hayward Performance ITBs, A’PEXi coolant overflow tank, custom oil breather assembly and much more! R-Crew Racing K-swap header. With the motor tuned by RedZone, it made a hefty 233hp!

Thanks You my wife Nicole P. Natividad aka "ATS*FIRSTLADY" for your patience and support; ATS*JAX for hanging out in the garage; Fred Chapman aka ATS*FCB, Phil Sison, Ray Bautista, Mike Estebar, Jason Powers, and the rest of the ATS Garage family; Ryan Basseri, Ryan Der and the rest at Rywire; Jeremy Duarte and the crew at RedZone Performance; Ben and the crew at K-Tuned; Matt from ICB; Sunny from 515Autobody; Loreto Garcia; DPK Family; Phillip Trinh; Boris 5Star A/B; Ross and the JSpirit Brand; Joey Lee aka StickyDilJoe 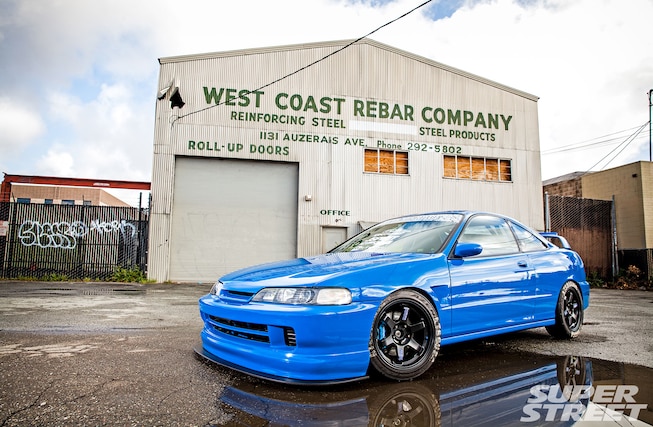