There is an absurd amount of secrecy that surrounds Osaka's underground street car culture. The word "Kanjo" means little to most, is a mystery to some and is legendary for the few who truly understand it. For the better part of three decades, Honda enthusiasts have been racing on an elevated highway system located in the heart of Osaka, Japan. This expressway is known as the "Kanjo Loop" because the roadways connect in a clockwise position on a loop. For the average everyday citizen of Osaka, this is just a means to get around the city. Afterhours tell a completely different story—this famed loop becomes a playground for midnight's children. Loop runners, known better as "Kanjo Racers" or "Kanjozoku," gather at an unspecified location and put their skills to the test in all-out madness on these highways. The roads aren't entirely empty or closed specifically for them to do their bidding. There are other cars on the road, including local law enforcement. The goal of Kanjo racers is to dodge anything that comes their way. This activity is highly illegal and most certainly not recommended.

Nearly a decade ago, Kanjo racing became such a huge problem for the Japanese that law enforcement officials began heavy crackdowns on all illegal racing activities. Enthusiasts were being arrested, having their agile Honda cars taken away and the Kanjo loop expressway was essentially locked-down. Many racers decided to leave the hobby behind, some moved to the racetrack and others just left because they grew out of it. The rivalry between Kanjo car clubs died down and those that remained stood united, battling the police while still keeping their JDM hobby alive.

These days, racing on the Kanjo is rare and those who have stayed loyal to this activity only do so to maintain a longstanding tradition. Any information on Kanjo racing that exists is unbelievably rare or skeptical. A lot of it is hearsay and rumors perpetuated by those who wish they were running the loop. Admittedly, I too knew very little until last year when I got a chance to have a firsthand account of how these loop soldiers do their work. I was blessed to have an opportunity that few would ever believe possible. It was a brief encounter, but a memorable one. Earlier this year, I returned to Osaka and was invited again to meet the Kanjozoku and to learn more about a tradition that the few who remained saw as their own religion.

On an otherwise quiet, mundane evening in Osaka, the streets became a symphony of screaming exhausts as members from legendary car clubs converged for an exclusive meeting. It was crazy and humbling to see guys from No Good Racing, TOPGUN Racing, Club Wharp and Law Break join together for one unforgettable night. In talking to my contact that made the meeting possible, a group of this size had not been together in over six years! 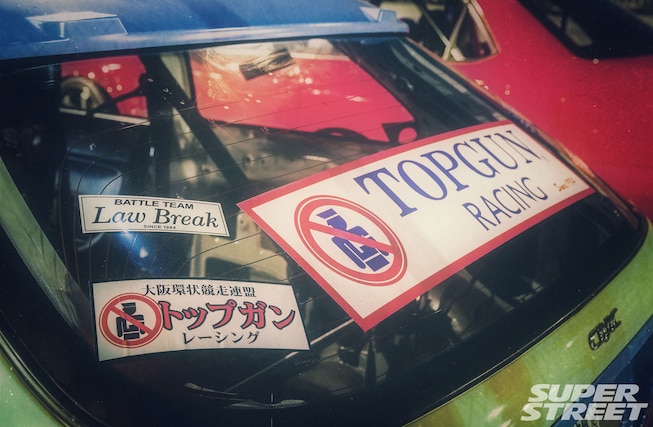 The major crackdowns from law enforcement in the years prior had left the underground society depleted, so it was astonishing to think that they would risk it all to show some Americans what Osaka Kanjo was all about. Because of their vow to secrecy, all the Kanjozoku sported masks of some type to protect their identities. This is why the hockey or "Jason" masks have become such important imagery associated with the Kanjo runners. The masks help to present a menacing persona while offering complete anonymity. They would speak and answer questions, but at no point was there any attempt made to learn names.

After getting a good look at their JDM Honda builds and all the vividly-colored liveries, we headed to the streets. Since this night was such an uncommon congregation, the Kanjozoku wanted to make the most of it by doing a parade run through the streets before hitting the famed Loop. Honda Civics weaved back and forth in controlled chaos with some passengers having half their bodies out the window as others blasted by at high-speeds. All other cars on the road, including the police, could only sit idly as the swarm of hatchbacks darted through red traffic lights. Some Kanjo loop racers would even go as far as to display their driving prowess by speeding into opposing traffic before hopping onto sidewalks to avoid imminent danger.

Looking back now, I still can't believe I was a part of this incredibly dangerous display of unlawfulness—and lived to tell about it. Eventually, they made their way onto the circular Osaka expressway and then the real show began. The Kanjozoku ruled the Loop until the sun came up. 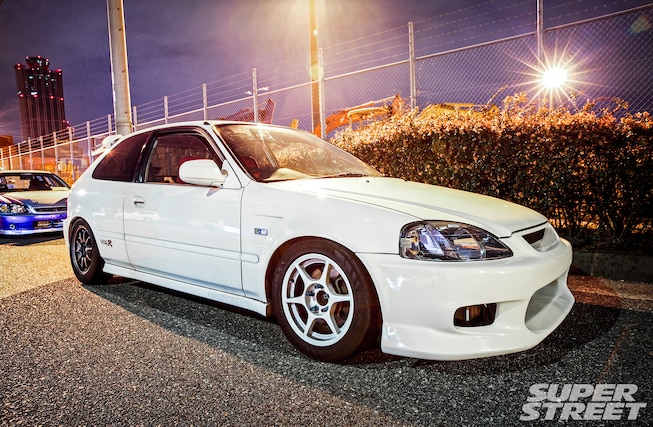 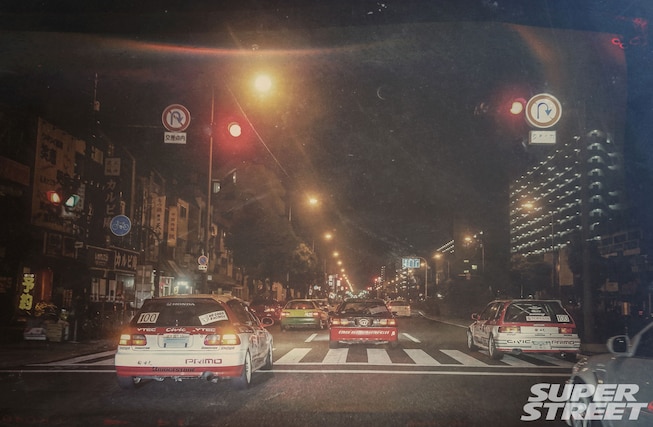