The 240SX that nobody wanted to happen

Everyone's got a sob story. The engine you blew to smithereens before you realized tuning is kind of important. The six weeks you waited for that ultra-rare, Japanese-only ashtray that nobody else cares about. The hangnail you got when lowering your bucket. It's time to wipe those tears away because Justin Nakamoto's story is a whole lot more disparaging than yours.

Nakamoto wasn't asking for a whole lot, which was to put together his version of the ideal 240SX. Its aesthetics, its styling—that's what he says first attracted him to the chassis more than 10 years ago. "I love all types of cars," he admits, "but I fell in love with Nissans." It was Nakamoto's first car, the only one of which he's modified to date, which means the buying process, its ownership and every single change he's made to it has a sort of sentimentality associated with it that you just don't get when plopping a B-series into your 14th Civic hatchback. But then the state of Hawaii got in the way.

Photo 2/18   |
After many phases of body and paintwork, Justin’s S13 has a “best of show” look with its BN Sports kit and Blueberry Magenta paint job.

You think Hawaii is the bastion of sleeveless shirts and year-round flip-flops that the rest of the country tells you it is, and you're mostly right. But it's no friend to car lovers. Tuning shops are sparse, and the state's lone racetrack has long been shuttered. Hawaii's labyrinth of automotive safety and emissions regulations are the real enemy, though. Here, annual safety inspections that penalize not just powertrain modifications but also those made to the body, suspension and brakes mean registering and legally driving around in something like Nakamoto's S13 is nearly impossible and almost always unlawful. "Usually, no modified vehicle will pass this inspection," Nakamoto warns. Just like any other law worth its weight in bureaucratic ink, there are ways around it, which Nakamoto intends on following up with later this year. He shares: "If you want to modify your car in Hawaii, you have to pay a tax and, yet again, pass another inspection. After [that], you're [sent] back to a station with [approval] saying that it's now safe to get a safety check."

If the whole process sounds expensive, silly and convoluted, that's because it is, which is exactly what prompted Nakamoto to relegate his already completed 240SX to dedicated show duty. Before any of that, though, the 31-year-old dabbled in the drifting movement. The project began with the ubiquitous, factory-turbocharged SR20DET engine. "I've always wanted to go SR20," Nakamoto says. "[But] I never expected the motor to be how it is today. It was supposed to be a plain SR swap with mild upgrades for daily use." What it turned into was something entirely different. First, the block was upgraded with the usual suspects that include forged pistons and rods, and up top Tomei valvetrain and cams were put into place. All of this works in tandem with the Garrett GT2871R turbo that's regulated by a SARD boost controller and an A'PEXi SAFC-2. It's a whole lot of excitement going on underneath the hood of a car that's got no place to race.

Nakamoto had no idea that being able to thoroughly enjoy his rear-wheel-drive coupe would be the sort of nuisance for the Hawaiian legislature that it's become, though, when first learning that the 240SX was the car for him. "After seeing the 240 in person and drifting, I thought it was the coolest car," he says of the first time he laid eyes on a friend's newly bought S13. "I was determined to buy one as my first car, and after months of searching, I found one that was in my price range—beat up, but the motor ran good." Nakamoto goes on to outline a decade's worth of modifications that culminate into a third paintjob, aero from BN Sports and Chargespeed and staggered 18-inch Work Meister S1 wheels. His 240 wasn't always so refined, though, and, like many projects, began with entry-level parts and cheap-o wheels. "After purchasing [the car], my dad and I painted [it] a fire-engine red in our garage," Nakamoto says. Once painted and with the SR engine in place, Nakamoto hit the shows. "That's when I noticed that my car looked exactly the same as all the other 240s," he says. "I decided to redo the whole exterior again, this time with a wider body kit and rims." Two years later and Nakamoto started off on a four-year-long path of winning show after show.

Nakamoto's passage to the 240SX that he'd always wanted wasn't easy. The government didn't want him to do it, mainland retailers didn't always want to ship to him, and the island's only track was boarded up all because of the sounds and smells of roasted tires wafting about trade winds. He's managed to find a way to enjoy his creation in his own way, though. "It was built for daily use and for the track, but since our only race track got shut down and because of strict laws, I ended up making it a show car." Maybe this is no sob story after all but instead the story of a once part-time track car that's been decommissioned and found new life turning heads at shows.

The Venerable SR20
Few powertrains are as synonymous with sport compact performance as Nissan's factory-turbocharged SR20DET. Almost entirely exclusive to Japan and available in three major configurations for both FWD and RWD applications, Nissan's 2.0-liter engine can best be distinguished by its red, black, or silver valve cover. At its best, the four-cylinder, twin-cam engine yields a maximum of 245 hp and 210 lb-ft of torque, depending on the application. Turbo options range from T25 to T28 that push air into the variable-valve-controlled top end, some of which even feature individual throttle bodies tucked inside a tidy plenum. With its square-bore architecture and ability to reach 350 whp with few modifications, the high-rpm SR20DET is perhaps one of Japan's finest engines of the 1990s. Source yours from any of the following chassis: Red: 1991-1993 Silvia K's, 180SX, and Bluebird SSS ATTESA LTD; 1990-1994 Pulsar GTi-R and Sunny GTi-R (Euro). Black: 1994-1999 Silvia K's, 1999-2002 Silvia Spec-R, 1994-1997 180SX Type R and Type X, 1994-1995 Bluebird SSS ATTESA LTD, and 1993-1999 200SX (Euro). Silver: 1995-2001 Avenir Salut GT Turbo and GT4, and 1997-2001 R'nessa GT Turbo. 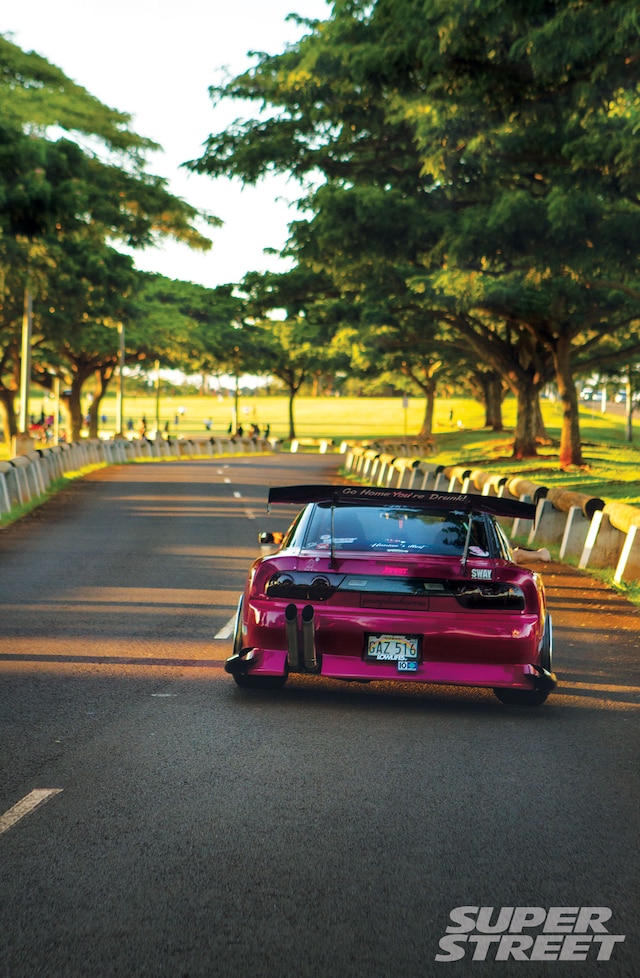 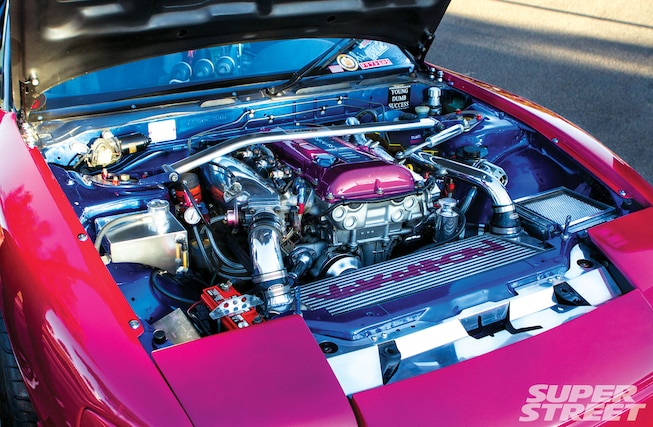