A fitting homage to a defining moment in European automotive history

There are some things Jägermeister-related we may or may not be grateful for, but the sticky liquor's involvement in German Touring Cars (DTM) is definitely a plus. This combination of vivid orange livery on one of the most desirable cars in the world is a traffic-stopping, head-turning event.

It's the work of Christian Georg Besemer and his CG Motorsports shop. Based in Richmond, British Columbia (immediately south of Vancouver), Besemer says, "our specialty is anything M." It didn't start that way, though. 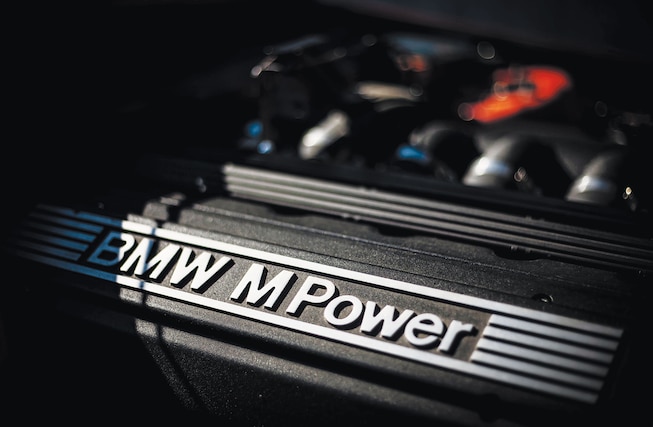 "I was a big Volkswagen guy back in the day and wanted to work at the local dealers," Besemer says. "But my dad already worked there and didn't want me to get a job at the same place, just in case people thought there might be any favoritism. So I walked across the street to the BMW dealer and they hired me. This was in 1989. I stayed with them and got a journeyman license."

This was also how Besemer grew to appreciate the many virtues of the blue-and-white roundel, although the VW habit was tough to kick. "All the money I earned at BMW went into Corrados and Sciroccos. My true passion was performance. And being a tech, I'd see cars come in that were modified the wrong way. That was sad for me."

This frustration led to setting up his own shop in 1999. "We originally did VW and BMW tuning, but eventually drifted away from VW. So did my customers. Now we're only BMW. We do a lot of servicing. BMW is building its cars so well these days that it's extremely expensive to make any worthwhile modifications. This Jägermeister M3 is a treat for us." 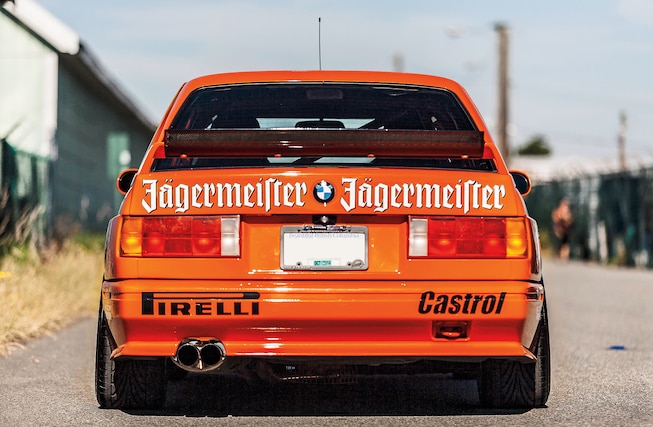 Besemer owns a couple of M3s himself and has built four cars similar to this one. In fact, client Ari Burstein (erstwhile H&R distributor in Canada and now a big man in the steel business) pestered Besemer regularly to sell him an M3. Finally, Besemer suggested that his shop build one to Burstein's specs. So they looked around for the ideal wheels. "The hunt is the most exciting thing," Besemer says. Incidentally, jäger means "hunt" in German.

This car started out as a white E30, but Burstein didn't want to see any trace of the old paintwork when opening the doors or lifting the hood. So it was stripped down completely for the full orange Monty. But what started out as a DTM replica suddenly became an example of mission creep. Burstein wanted a rollcage (it's an OMP unit) and the Euro-spec S50B32 engine from an E36 M3.

"Putting an E36 engine into an E30 bay was fairly straightforward," Besemer says, with a modesty that doesn't even hint at the ingenious use of original BMW components. "We didn't have to build anything fancy. We borrowed from the parts bins of various models, including the E21 (the first-generation 3 Series), E24 ('80s 6 Series), E28 ('80s 5 Series), E32 ('80s 7 Series), E46 (fourth-generation 3 Series), and E53 (first-generation X5). If the techs at BMW had built one of these, they might well have done the same thing."

Naturally, the quest for power didn't stop there, not when there's the chance of adding a supercharger. Besemer turned to Active Autowerke. "They're the go-to guys for forced induction in BMW cars," he says. They had a stage one tune all ready to go, but of course, Burstein wanted a stage two, which Active Autowerke had not developed up to that point. "So we transported the car down to their shop in Florida." And in went a methanol injection system as well. Joining the right kind of Miami vice are CP low-compression pistons and a Walbro 400 liters per hour fuel pump.

"The big hurdle was the intercooler," Besemer says. "We modified everything in the kit to make all the pipes fit." Plumbing in general has been a challenge. Take the headers, for example. "It's best to have all six tubes the same length. We found the factory E36 headers were not only a beautiful design, but they also worked the best. We customized a mandrel-bent centersection and that goes to an Eisenmann muffler." As well as servicing the aftermarket, Eisenmann is an OE supplier to Porsche and AMG.

The few transmission tweaks were a JB Racing lightweight aluminum flywheel and heavy-duty clutch, UUC Motorwerks short shift kit, and the limited-slip differential from a Z3M. "It holds an extra liter of oil," Besemer says. "And the fanned casing helps keep things cool."

This idea of cannibalizing later models to benefit a BMW from the past was repeated with the steering rack. It's another Z3M component, chosen for its close-ratio gearing. And note the front fascia from an Evolution II M3, a variant that never came to the United States.

No go-faster build is complete without the ability to slow down. Besemer installed a Brembo big brake setup at the front, with four-piston calipers biting on 13-inch one-piece cross-drilled discs with Hawk HPS track pads. The rears have 11-inch Brembo cross-drilled discs and the same Hawk pads.

Ground Control coilovers and Racing Dynamics antiroll bars (thankfully, an over-the-counter purchase that didn't need any extra tweaking) collude with Toyo Proxes P1 tires on Fikse Profil 10 forged alloy wheels to provide dynamics, traction, and grip. Which is where the real fun starts. "The widest rear tire you can fit on this M3 is a 245," Besemer says. "This car will light those tires up in Third gear. The power is almost unusable."

Almost, but somehow Burstein manages to drive it, even though the dyno says 414 hp at a screaming 7,300 hp and 317 lb-ft of torque at a similarly busy 6,500 rpm, measured at the wheels. He sits in a Recaro Sportster CS seat, buckles up his orange Graphic Design seat belt, adjusts his E36 side mirrors, squints at Podi vent-mounted gauges, then puts his feet on Hamann pedals.

And he'll be heading to Area 27 as soon as that project is completed. It's a new racing facility in South Okanagan (apparently one of the warmest and driest places in Canada) with a track designed by former F1 racer Jacques 0.

"It's not just a straight-line machine," Besemer says. "It has the power and the handling. It's the best of all worlds." Not that we should ever think of this build as finished. Besemer says, "This is the type of car that will never be done." 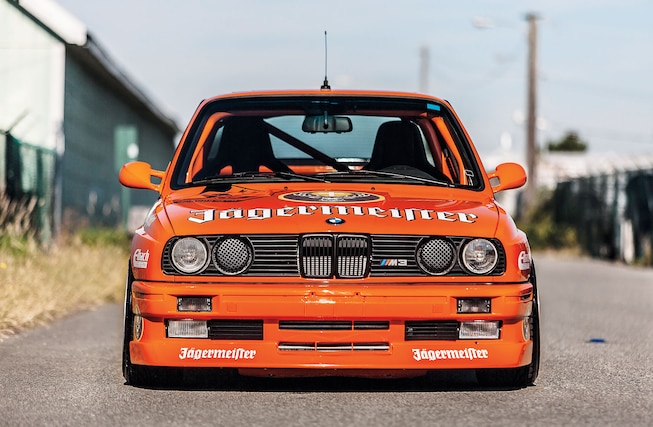