What started out as a kind of retro-ish pastiche with an obvious nod to the E-Type, the Jaguar XK8 has matured into a handsome swan on today's roads as contemporary styles have morphed into ugly ducklings around it. The late Geoff Lawson designed this and several other Jaguar cars during the time when Ford was still the lackluster owner. That said, the XK8/XKR is anything but lackluster and helped save the famed badge from becoming yet another defunct British manufacturer.

If a machine can be said to have a character, the XK is one such machine. Not just because of its looks. Although pastiche or otherwise, those lines have some cool curves. It's the whole driving experience. How great would it be to gaze on that crafted wood trim and sit comfortably on fine hide while being master of such sinewy power? Who cares if standards are slipping elsewhere in the world when we have this oasis of sophistication and calm?

The XK8/XKR comes in coupe and convertible body styles. At its introduction, propulsion came via a 4.0L AJ-V-8 engine making 290 hp at 6,100 rpm and 284 lb-ft of torque at 4,250 rpm. The rear wheels were fed this power through a ZF five-speed automatic transmission.

The supercharged and lavishly equipped XKR was introduced in 2000, enjoying 370 hp at 6,150 rpm and 387 lb-ft of torque at 3,500 rpm. This was the same engine as the XK8, but the Eaton-equipped R employed a Mercedes-Benz W5A580 five-speed auto to handle the extra push. All '02-on XK models have a ZF six-speed auto that has usually been no trouble at all.

At the time, superchargers seemed a better forced induction option than turbos, because there was no lag. There's just massive acceleration from low engine speeds at the beck and call of the right foot, as well as that distinctive whoosh. Even the pre-'03 XKR is wonderfully fast in a straight line. The zero-to-60 mph time of 5.1 seconds doesn't really tell the whole story since getting those 4,000 pounds or so moving from standstill is not that exciting. But once there's some momentum and then more throttle, that thrill of feeling only slightly in control of an automotive avalanche happens pretty quickly. Which is a good time to remember the R's Brembo brakes are standard. And "in a straight line" are also the operative words here.

This X100 generation of the XK—based on the old Jaguar XJS platform, which it shares with the Aston Martin DB7—was always a bit too soft to show any Porsche-like agility. But then again, the point of this car was to be a grand tourer, a gentleman's express; the supercharged R version just puts more emphasis on the "express" part. Neither version succumbs too early to understeer, so that's another plus.

The initial 4.0L V-8 had Nikasil cylinder linings that didn't react well with high-sulfur gasoline, especially when the engine couldn't get up to temperature for an extended time. Jaguar fixed many of these units under warranty. Look for a plaque in the engine bay. If it's still the original engine and it's running well, it means it was used for longer drives where it could get up to proper operating temperatures. And modern fuel has much lower levels of sulfur. A blow-by compression test will help detect a problem.

Early 4.2 engines had plastic timing chain tensioners, which sounds like another instance when accountants won their argument with engineers. Jaguar eventually went to steel versions and there are steel replacement parts. Anyone buying an XK where this hasn't been replaced should get it done as soon as possible or risk turning the engine into so much scrap metal. Other areas of the engine bay that need special attention are water pumps, sticky thermostats and corroding radiators. 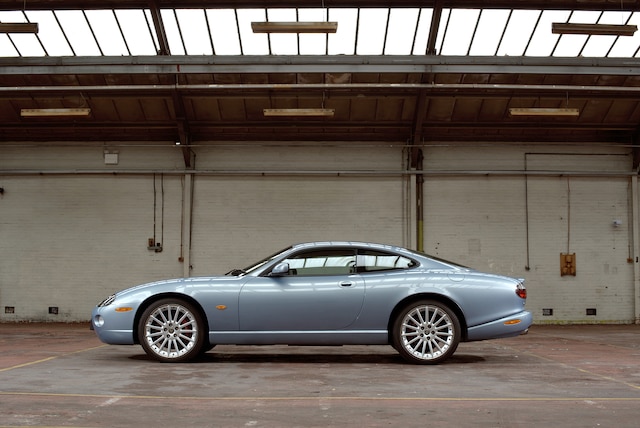 It's a heavy car, so that will result in worn suspension parts such as front suspension bushings and rear shock absorbers. Bushed bushings could be the reason for particularly vague and floaty handling. Examples with the Computer Active Technology Suspension (CATS) may have fraying wires that will make their presence known with a dashboard warning light. The brakes are usually pretty sturdy, but hard driving will naturally take its toll. Worn steering columns, experienced as knocking felt through the wheel, affected a few pre-'00 models.

Peeling lacquer has been a problem on Jaguars from this era, especially metallic finishes, so really inspect the body thoroughly. Convertibles tend to have body flex, so look closely for any cracks in places like the windshield frame. And of course, make sure the roof is in good condition.

Jaguar interiors really are something else. So much wood and leather there's almost not enough room for the occupants. The XK8/R is big on the outside but somewhat tight on cabin space, although the trunk can take two sets of golf clubs. The rear seats are really of the "plus two" variety and therefore probably not used much. So focus more on the condition of the front seats, especially that outer bolster of the driver's seat where previous owners would have rubbed against while getting in. If the car has spent its life somewhere hot and dry, look out for peeling and warped veneers, as well as cracked dashboard tops and other neglected leather surfaces. Check over the electrics too: power windows, power steering column, display screens and gauges. And make sure there are two working keys.

A '04 XKR coupe in good condition is valued at $5,079 from a private seller, which seems a trifle optimistic from a buying point of view. As usual, prices out there in classified ad-land vary wildly. At the time of writing, one dealer had an '00 XK8 with just over 82,000 miles selling for $9,995. Naturally, buy the best example possible; a budget of $10,000 should net an excellent XK.