Respect your elders—a universal concept to apply in all instances outside of that old homeless guy on Venice Beach who told you he's from the future while peeing into a Folgers can. Those who have done it the longest have a wisdom and way of doing things that no young gunner can Wikisearch. You just need to be shown firsthand. 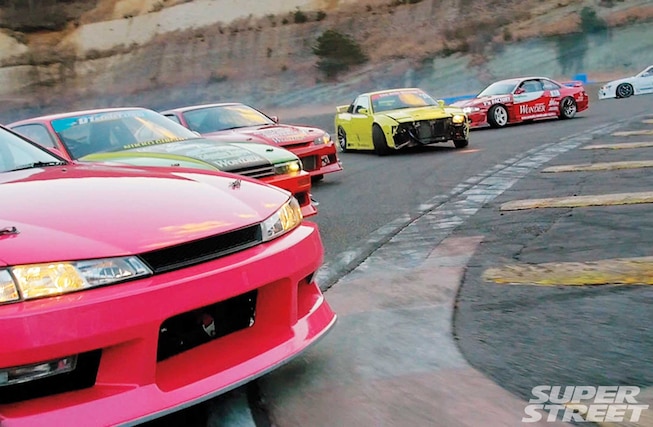 In January '15, Sam, Jofel, and I traveled to a cold and windy Car Modify Wonder x Hardcore Tokyo drift day at Nikko Circuit in Tochigi, Japan under the guidance of Jun-ichi Takahasi of Hardcore. It was a reminder of the unique Japanese style and its drifting heritage. It was also a departure from the raucous smoke show we have come to love stateside. The drift day occurred during Tokyo Auto Salon week after we had our first Tokyo Fresh Meet and RWB get together. 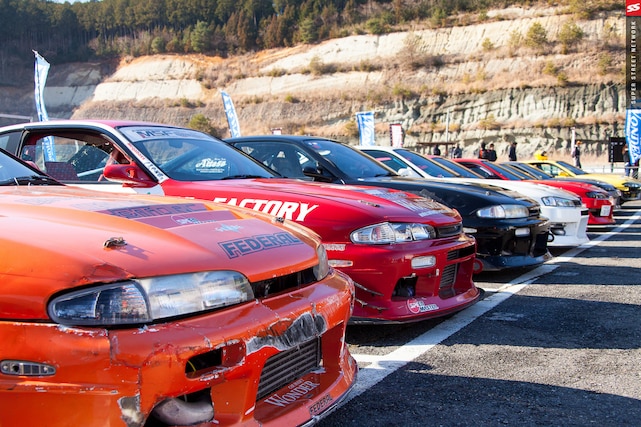 Japan's tradition of drifting began on mountain roads as a result of street racers toying with tire traction limits. It then branched off into a controlled-driving technique and national sport. Kunimitsu "father of drift" Takahashi, a former motorcycle racer, used the slide technique to gain advantage around corners while racing Japan Touring Championship cars in the '70s. The crowd loved it and young street racers like Keiichi "DK" Tsuchiya began to imitate it.

Americans later followed suit with their own twist. In '04, Formula D launched—back when KaZaA file sharing helped words like "Touge," "Team Orange," and "Option vid" enter my vocab. But like comparing the Euroleague to the NBA, American drifting as a whole has never been as controlled, stylized, and harmonious as the original product. Blame it on cultural differences.

Ken Gushi remarked, "You see a lot more style here, lots of flashy cars, and a lot of great talent. The cars are extremely clean and there is a lot of synchronized close-proximity drifting going on. It's where drifting originated, and they've taken style and driving aggressiveness to another level. It's a great honor to be driving with these locals."

Some tracks are made to drift. Nikko Circuit still holds time trial events. It is tight and slower compared to big American tracks shredded by 1,000hp Formula D cars. This was the second trip to Nikko for Gushi, so he welcomed Formula D companion Matt Field with the full experience while driving Nishida's personal Nissan S13. "We had a little bit of contact on the track practicing tandem. It's his first experience, and I wanted to show him bumping is part of the game." 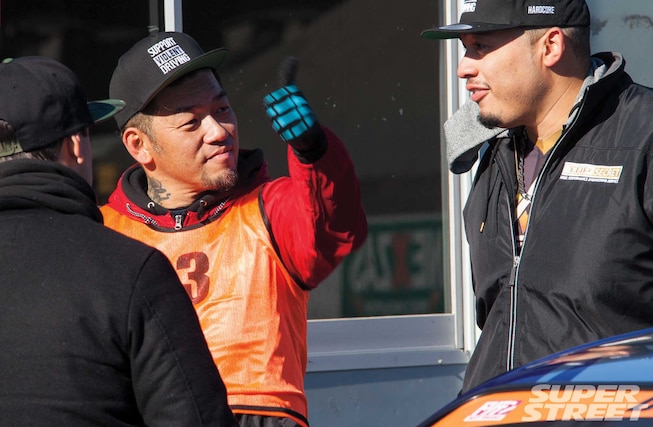 First-timer to Japan, Matt Field replied, "I'm blown away and a little taken back. These guys are super humble, open, and inviting—you don't always get that back home. I got to drive a 180SX, only my second time driving a right-hand drive. The level of driving out here is pretty insane. Even the street guys are so good."

Photo 14/249   |   Brothers in boost, we enjoyed watching this Soarer and Supra sliding all day!

D Mendoza, owner of SSAutoPower tuning shop and parts fabrication in NorCal, is a former employee of D1 and now occasionally acts as an American liaison for Japanese tuner groups. He is one of the few "round-eyes" engrained and respected within Japan's drift community. Vocal about his Formula D and drift style views, he told us, "Formula D guys are just "pedal to the metal" in one gigantic turn. Here, you watch the driver's feet and it's like Dance Dance Revolution—literally every guy. They have car placement that's just unbelievable. Back-Attack is Japanese style, backward entry basically. Nobody says look at the smoke and the sound. Sideways drag racing is what it ends up being outside of Japan. You can buy all the parts for your car, but they still don't sell driving skills on aisle seven of Walmart." 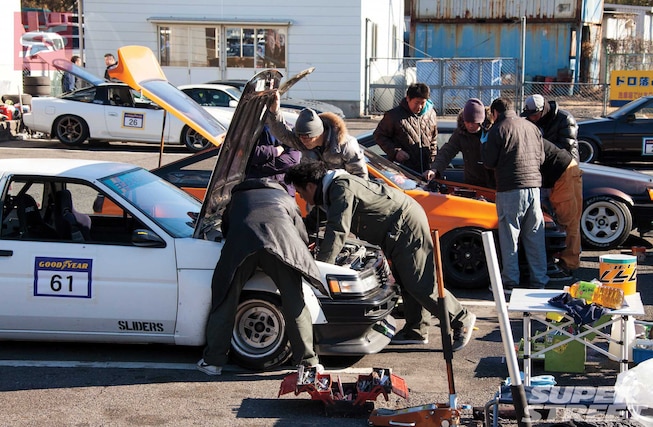 To a Westerner, the entire experience was magical—the cars, the colors, the precession of synchronized drift trains. This is the norm in Japan. The quality and detail of the builds are on another level. The footwork and car control at this "for fun" drift day were mind-boggling. They make it look easy and maintain a humble attitude. It is about passion, community, and that unique character we were all born with. The horsepower race going on outside of Japan makes for an exciting show and could be called evolution by some, but it's important to never forget the origins of drift. 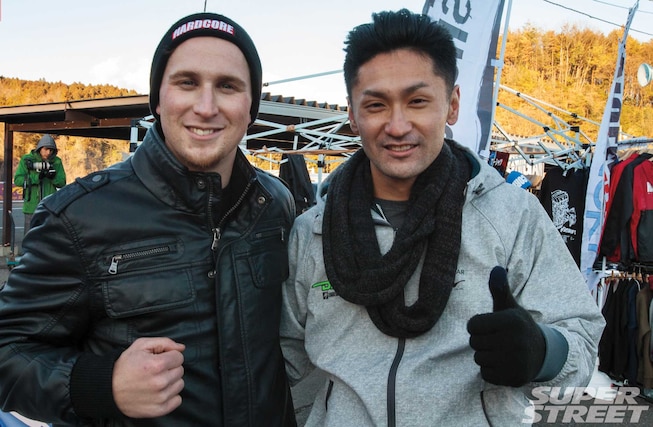 Matt Field: "When they come out of a corner, stage, and get ready to throw it in and initiate, they are stuck right on each other. In Formula D, we always play these games—you have to give them a gap, your cars faster/slower, what're they going to do or not do, etc. These guys know what they're going to do. It's about the tandem, spirit, and fun. If I could have taken anything away, it's just drifting is still fun."

Ken Gushi: "It's crazy how they can get millimeters away from each other and put the car wherever they want."

D Mendoza: "A lot of Americans focus on steering angle, but the guys out here, very minimal angle upgrades. They're just driving their ass off. How they throw it in, the downshifting, the up-revving, and the maneuvers... It's about the footwork."

D Mendoza: "If your car is a tube chassis or front-end tubed or the rear end is tubed, it's an American drift car. There's nothing Japanese about it. A Japanese-spec car is a lot cheaper, but there is definitely a lot of fabrication that goes into it."

D Mendoza: "Drift missiles, beat-up cars, you see them here, but they're usually just rent-a-cars or beaters from the military base. Japanese have a lot of pride in their stuff. Japanese cars are really clean. They beat them up and then put pride back into it to repair. The car is an extension of you. When the car next to you is clean, there is a harmony. They look good together. Japanese [drifters] look at the bigger picture, too. Like, 'I want to be part of the community, not the car is just me.' That bond is just crazy. And that's what I really love."

This Goodyear-sponsored Nissan Laurel C35, owned by Takashi Haruyama, is the oldest D1GP car still running in the series—first entered in '05. It is also the only Laurel currently drifting in D1GP and the only car to participate in both Formula D Asia '14 and D1, simultaneously. It runs a tuned RB engine.

Fast facts about its owner: Haruyama loves to drink Mexican Sol beer, is the owner of Car Modify Wonder, believes "four-doors are for real men," and personally double-checks all measurements of aero, hard parts, and body kits purchased from his shop prior to shipping.

Variety is the spice of life. Deciding what kind of body kit you want for your car isn't like deciding what you wear to work or school. Unless you're ballin', the type of body kit you pick is a commitment and an expression of your personal style. For Nissan S-chassis owners, it doesn't come easy choosing a body kit, either, but these three drifters went with the tried-and-true Car Modify Wonder aero.

We met up with Yuuto Kujirai, Yoshioka Naoki, and Nobue Nakamura at Nikko Circuit. Despite thrashing these cars sideways for hours, at the end of the day, they were still well deserving of some additional photos.

Going in chronological order, we'll start with the '96 180SX. Unlike its North American 240SX S13 counterpart that was offered until '95, the 180SX stayed in production through '98. Using an upgraded Kazama Auto turbo and other various engine mods, Yuuto's 180SX has been bumped to 350 hp. No doubt, power is only part of the equation. Footwork is critical for every drift car, and Yuuto went with GP sports for S14 front control arms. On the outside, it's all Car Modify Wonder, specifically its Glare series with a few optional parts such as the Type 1-D front, Type 1-A sides, and a 3-C rear bumper.

The second machine is an S14 piloted by Yoshioka Naoki. An array of Tomei and Trust parts made Yoshioka's SR20DET push roughly 350 hp as well. Helping Yoshioka go sideways is a set of 3UP coilovers and suspension links. The old transmission has been swapped with a full six-speed Nismo gearbox, including an LSD, twin disc clutch, and lightweight flywheel. The exterior gets the full Car Modify Wonder treatment with a Type 1-B front, 1-A side steps, 5-B rear bumpers, and redesigned DMAX front fenders.

The S15 belongs to Nobue Nakamura. It's one of the cleanest S15s we've seen that's built and driven by a female, and she slides in style with Car Modify Wonder's Glare kit. Nobue's SR20DET also pumps out a similar output as the other two cars with the help of a Trust T518Z turbo, GSport exhaust manifold, and HKS intake. For suspension, she opted for a set DG-5 suspension with an SPL shock upgrade. Not just a weekend drifter, Nakamura has also competed in Drift Muscle, the drift series that Keiichi Tscuhiya and Daijiro Inada created in '11. 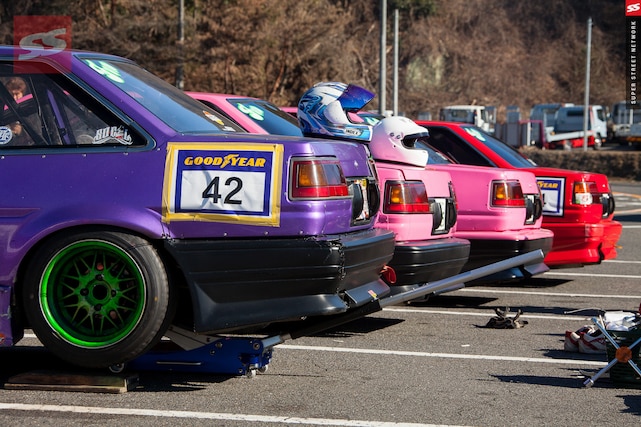 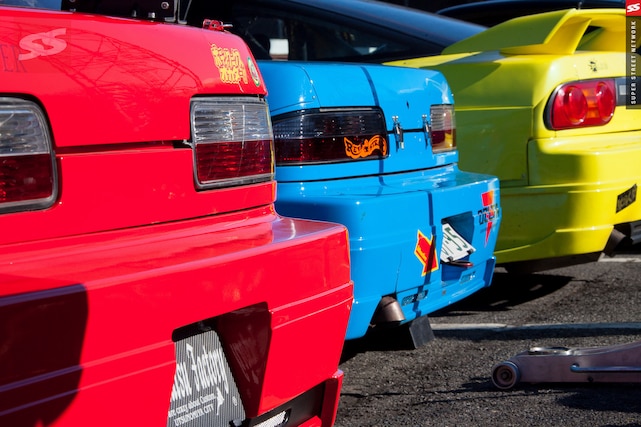