Updated June 2020: Volkswagen's performance R-Line has endowed American enthusiasts with some real all-wheel-drive winners over the almost two decades of its existence, including the current Golf R, but it all began with the first version of the R32. We live in an age where the hot hatch debate has never been fiercer, but it's also never been a fair fight because both the GTI and R (and R32 before it) are so far out ahead of the competition. So, lets revisit what makes the AWD Mk4 VW Golf so special ...

Mozart died young. Charlie Parker died young. Hendrix died young. But boy did they make some impact. The first VW Golf R32 was only available in the United States for one year and now it's a classic. Maybe even bigger than a classic, more like a creature of myth. Sometimes you have to wonder what goes on at Volkswagen's meetings whenever the suits discuss the States. They obviously want to sell more cars over here but make some of the best ones scarce.

The original R32 is based on the fourth-generation Golf (1998-2004), which was (is) quite luxurious. The Golf's cabin is like a mini-Mercedes with lots of soft-touch plastics. But the model range in general is heavy and the handling stodgy. Subsequently, the GTI version, while substantially better than its immediate predecessor—the Mk3, which debuted the VR6 engine—was still something of a letdown when compared to the second-generation Golf. The R32 shared front suspension bushings and front spindles with its platform-mate, the Audi TT, which allowed for better handling and far more steering precision. For those wondering, yes, these parts are direct swaps onto other Mk4 cars. 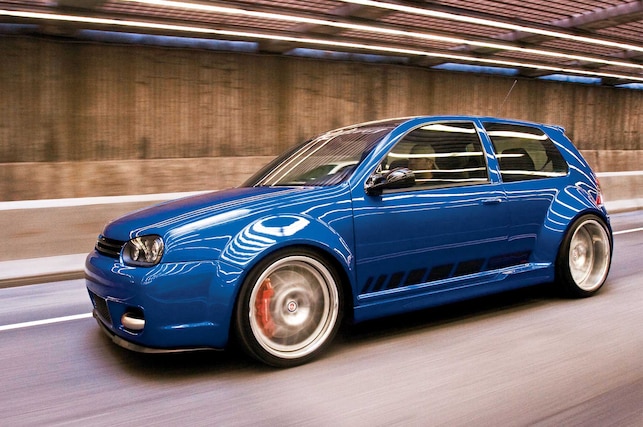 Although the Mk4 platform was in its final days by the time the R32 came along, the car restored everyone's faith in the idea of a VW hot hatch. Straight from the factory, it came with a lower suspension, beefier brakes, deep front spoiler, substantial rocker panels, and a bigger rear bumper, housing twin exhausts. The interior is plush, with Konig seats each bearing that famous R logo, and the steering wheel is pleasantly chunky.

The engine by itself is enough to bring on overwhelming nostalgia and misty-eyed-ness. It is, of course, the famed 3.2L, 24-valve VR6. Its narrow-angle V of 15 degrees makes it possible to package into a compact car's engine bay. Stock output is 240 hp at 6,250 rpm and 236 lb-ft of torque at 2,800 rpm. The engine delivers the kind of response that 1.8t owners could only dream of. And that exhaust note—often compared to an angry Wookiee—is something even BMW I-6 owners will lust for.

The only transmission in town is a glorious six-speed manual linked to a Haldex part-time all-wheel-drive system that brings the rear wheels into play when the fronts can't handle all that power. The R32 is swift yet sophisticated, tenacious yet tranquil. For the vast majority of enthusiast drivers, this was all the car they ever needed. Only 5,000 units were brought to the States. 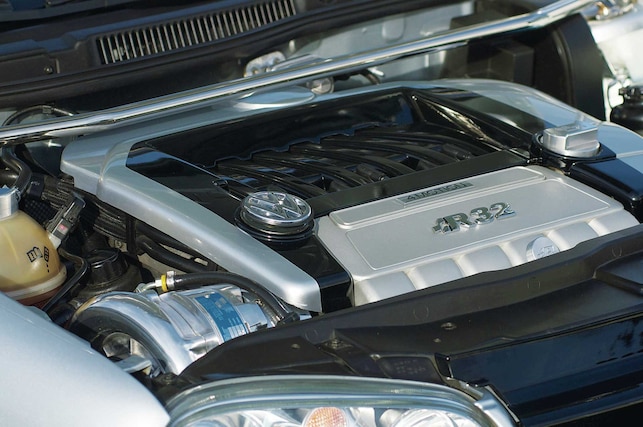 Acceleration from standstill to 62 mph (100 km/h) is 6.4 seconds and top speed is 154 mph. These days, a '20 GTI makes 258 lb-ft of torque and can sprint from zero to 60 mph in 5.6 seconds. But, as with many things, it's not what the R32 does but how the car does it. Despite the great strides in current turbo technology, there's still a lot to be said for a revvy naturally aspirated engine with that feel of instant and fine-tuned throttle modulation under the foot.

By now, just about every MK4-based R32 in the country has probably had a decade-and-a-half of hard driving, and plenty of them have been modified. Good luck finding a stock example. We know of a few museum pieces out there, but why buy a car that you'd feel guilty about driving?

KBB values a version with 150,000 miles in good condition at $6,495 when sold to a private party. Dealer trade-in on that hypothetical model is supposedly $5,594. Bluebookland must be a magical, wonderful place where R32s are keenly priced.

We spoke to Kristen Potter at Parts4vws.com to get an idea of what potential R32 owners should look for. She also provided us with prices for common replacement and maintenance parts. She backed up our assessment that a car with records is worth a decent premium over a car with a suspicious past. The prices below don't reflect labor, but that's a personal thing between you and the person spinning the wrenches. 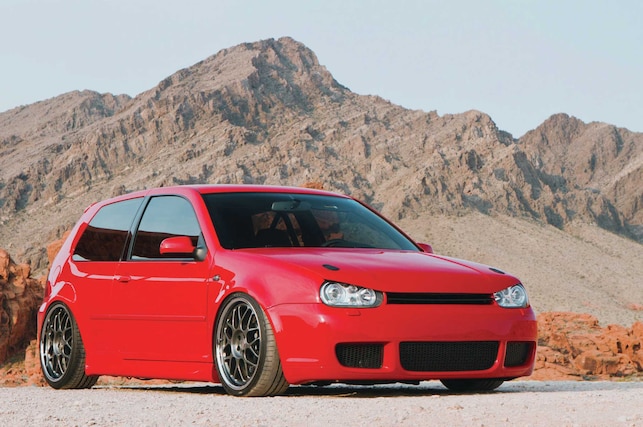 Start looking at front strut top mounts and bearings ($33), since those will suffer from hard driving and bad roads. Inspect the condition of the seats, especially the driver-side outer bolster. The clutch system's slave cylinder might fail ($119). Check the radiator fans; there are two ($135 each). Anything noisier than a whoosing or erratic operation is a bad thing. Thermostat housings ($80) might be troublesome, but a component affectionately known as the "crack pipe" ($45) will inevitably, well, crack.

It seems the usual VW worn timing chain woes apply to this engine, too. Tensioners can go at any time and the results are invariably catastrophic. Make sure any high-mileage cars have had their chains and tensioners changed ($199 kit). Uneven running? That might be down to a dodgy MAF sensor ($199). Remember also that the fluid and filter in the Haldex system will need replacing every 35,000 miles ($75).

Buying a lower-mileage car might mean it is still on the stock clutch ($389 disc, pressure plate, throw-out bearing kit). Occasionally, the dual-mass flywheel will need to be replaced ($456) and there are also other aftermarket options. The R32 was blessed by VW with larger brakes front ($216 each rotor/$43 all four Mintex pads) and rear ($134 pair of rotors/$34 all four Mintex pads). While you're replacing pads and rotors, you might consider stainless steel braided brake lines ($210 Neuspeed) to increase pedal feel and high-performance brake fluid ($20 per liter) to handle more heat. 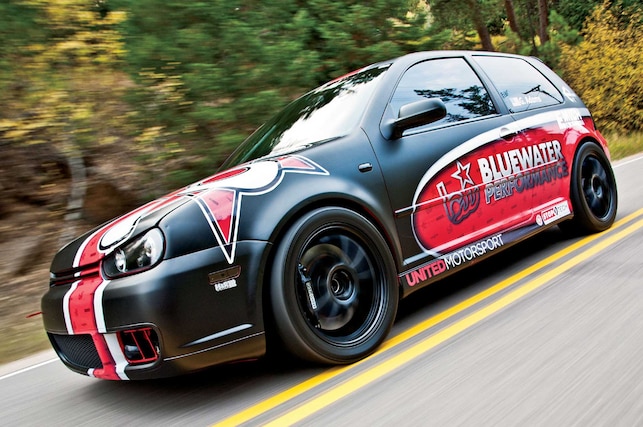 Basic maintenance items are relatively affordable: spark plugs ($12 each). With every few changes of plugs, you might also consider coils ($27 each). The factory air filter ($14) is adequate, but most owners will look to the aftermarket ($190 Neuspeed), while the factory fuel filter ($9) is your best bet. The oil filter element ($8) is downright cheap as is the drain plug and washer ($13), but as with any car, oil has gotten pricey (look for the VW/Audi-approved 502.00 spec).

There are various other little issues that most owners would probably have ironed out but expect a few more to arise. There were two recalls. One was for an iffy seal on the master brake cylinder, the other for a brake light switch malfunction.

How Much Would You Bid For This 1997 Toyota Supra With 48K Miles?
European Car features