It's a bit of a crazy notion to think that people would create things just to destroy them. The whole idea behind putting any amount of time and effort into something would be done so with the intent for it to last, right? Inevitably, nothing ever lasts forever, but the whole idea of creating with an ultimate demise in mind is, well—unusual, and frankly sort of sadistic.

When it comes to the motorsport of drifting, participants don't go out purposely to destroy their cars; they are just more accepting of the possibility. There's something poetic about the notion of sliding a car both gracefully and violently. What many don't understand is that it definitely takes a special type of individual to flourish in that environment. Your brain needs to be wired in a specific way in where you're OK with diving headfirst into imminent danger. Vitaly Sopkin from Phoenix, Arizona, is one of these unique personalities. He loved the idea of possibly destroying a car so much that he even gave up on his dream car because of it.

"Back in '06, I owned a MKIV Supra and it was the only car I ever wanted," Vitaly explains. "I was young and just poured all of my money into it. I slowly began to realize the more money that went into it, the less I drove it. It became more of an investment, and the Supra didn't bring any joy to my life. I want to say it became more like dating a high-maintenance supermodel that just would not put out, if you know what I mean. So I decided to sell the Supra, and as the new owner drove off in it, I headed straight to someone's house to purchase this Nissan 240SX."

Photo 6/21   |   Tubular front end and a single-turbo 2JZ-GTE—two indications that this S13 is built for destruction!

Most would consider the S13 a downgrade from a Supra, but for Sopkin it was simply a fresh start. It was a car that had loads of potential that he would have no qualms about tossing around—and would cost him half of what he had to put into his previous Supra. Things started out simple with an SR20DET engine swap followed by a more competitive, built SR, but it just wasn't enough. The turning point for the build came when Vitaly decided to create a monster using an unusual combination—a Frankenstein if you will, with parts from everywhere that just work in violent unison.

"I wanted to revamp the car with a goal for form to meet function. Not only did I want the car to look good rolling down the street, I also wanted that 'wolf in sheep's clothing' type of feel because it would be a competition-ready race car. It is a firm belief of mine that you can have style without sacrificing functionality," Vitaly says.

The confidence in Vitaly's words comes from acquiring a wealth of experience and knowledge through the years. He grew up in the small northeastern European country of Tallinn, Estonia, where his dad competed in the European Rally Circuit. His family roots provided him with constant exposure to spirited race vehicles and he currently operates his own shop, Ace Up Motorsports, which caters exclusively to drift cars. Being mechanically inclined with a personal shop space means plenty of experimentation, and once you see what this S13 is made of, you'll begin to understand his crafty ways.

Currently residing underneath the fiberglass bonnet is a Toyota 2JZ-GTE engine. He might have sold the Supra years ago, but there was something about the power that it offered that he missed. The thing about Toyota JZ engines is that they can make gobs of reliable power much easier than the smaller 2.0L Nissan SR. A Future Fabrication twin-scroll T4 manifold is mated to a massive Garrett turbine to carry the boost load. Twin TiAL 38mm wastegates keep the setup working efficiently and a custom V-mounted intercooler/radiator setup brings chilled air into the Toyota Aristo powerplant.

Vitaly has abusive driving tendencies, so the drivetrain was in need of some reinforcements. The typical Toyota R154 transmission was removed, and with the help of a Maverick Motorsports adapter plate, a six-speed manual transmission from a Nissan 350Z now handles power delivery. Inside the transmission is a SPEC twin-disc clutch that can withstand around 1,000 whp. Breaking axles with this level of power production is quite common, so he also upgraded to a wider S14 rear subframe that helps to accommodate a factory 350Z R200 differential.

The amalgamation of parts doesn't stop there. Footwork upgrades consist of a myriad of aftermarket suspension components from the different S-chassis platforms. Driftworks drop spindles and TEIN HE Winding Master coilovers bring the vehicle down to earth, while spherical bushings have been installed to ensure nothing binds under heavy load. Braking is anything but factory S13 as the JZ-powered Nissan now features Z32 300ZX brakes with a brake booster from a Sentra and a master cylinder from a Pathfinder SUV. Making contact with the pavement is a set of double-staggered three-piece SSR Professor SP1 wheels wrapped in Falken rubber.

As stated, the ultimate endgame was to create a project that embodied the best aspects of both function and form. This vehicle unequivocally performs and also looks the part. Vitaly's S13 hints at the possibility of a mixed-matched lifestyle with its newer Kouki S14 face. The rear quarters have been widened an additional 80 mm to house the 10.5-inch-wide wheels, and the custom side-exit exhaust on the passenger side hints to onlookers that this is not your typical street car. Though styled aggressively, the body panels of Vitaly's 240 actually disguise some of the best aspects of the car; the entire chassis has been reinforced with hoards of custom metalwork by Vitaly himself, and the raw frame is all the style it really needs. It is hard to see with the car altogether but Vitaly also created a rear-detachable fuel cell cradle, custom rear firewall, and a tubular front end.

"Over the years, this car has seen a lot of different stages. It has evolved along with my own personal style, but all I ever really wanted was a car that I could build to destroy. I just wanted to have fun driving it on both the street and the track. It certainly didn't hurt that it looked great in the process of doing that. If I somehow managed to demolish the car in the process, I am perfectly OK with that. I took the car that I built with my own hands to its absolute limits. What more could I want?"

Photo 14/21   |   Vitaly breaks the back end loose with ease thanks to a hydraulic hand brake. 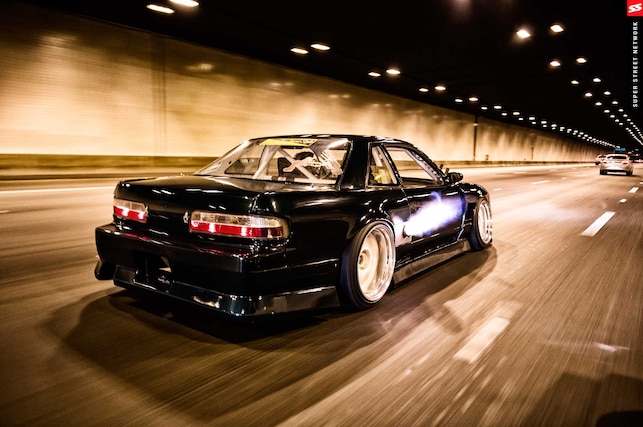