"I like to live in the moment and do hoodrat stuff with my friends," started 23-year-old Vinh Luong of Northern California. We couldn't agree more with his philosophy on life. Who doesn't love YOLOing and doing dumb hoodrat shit all the time? Vinh reminds us old folks about how fun it was to be in our late teens and early twenties and also what it was like to build our first project car.

Vinh's '09 Subaru STI has been a six-year journey of ups and downs, and it all started in high school when he fell in love with the Hellaflush movement. "That's when I met a couple of my closest friends, before Royal Origin is what it is today. We grew up and bonded, and from there, life became cars and friends. We would cruise around, sit in parking lots all night, and talk about anything and everything." Whether it was talking about boobs or boost, incredibly strong friendships were made, and the Royal Origin clique that Vinh grew up with became like family. Their friendships also helped mold Vinh's STI is today.

Starting with his stance game, the project had to have the perfect suspension and wheels. "Wheels are like the shoes for the car. They can make or break the look," Vinh noted. With that said, you'll only find a set of the finest JDM wheels a college kid can save up for and buy—Work Meister S1s. Of course, the wheel specs had to be as wide as possible, so Vinh opted for 18x11" with stretched 245-series Falkens around all four corners. Being as low as possible was equally important and it surprised even us to find this STI is not on air ride but BC Racing coils. "I love the reaction when people find out that my car is static," he laughed.

The rest of the exterior is kept clean and simple with a Chargespeed front lip and sides, Perrin rear wing, and Ganador mirrors. In our opinion, it's just the right amount of add-ons as to not take away from the hatchback's fitment and flow.

By now, most stanced cars would be finished; however, Vinh had higher goals. And once the stock motor blew, plans had accelerated for a full rebuild. "It was the most stressful part of the project, especially with the situation being so unexpected. I was in school at the time, but luckily I had good support from my family, friends, and sponsors. I couldn't find the time to work on the car myself, so the engine was rebuilt by some good buddies of mine, Devin and Brandon at Unlimited Auto Craft. All parts were selected by us, with power goals and budget being deciding factors."

The 2.5L EJ motor was upgraded with forged pistons from CP, ACL bearings, ARP head studs, as well as a host of goodies from TOMEI, which included a bigger turbo, headers, cams, and more. With all the right parts moving in unison together, Church Automotive performed its magic on the computer to squeeze 438 whp and 424 lb-ft of torque using E85. "The goal at the time was to push some real power, but also to try and be conservative. I wanted a reliable slammed race car, which doesn't really make sense," he laughed. "But at the end of the day, the car is unique because of the combination of stance and power. Not many people drive around that low and with that kind of power." 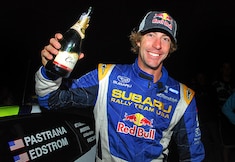 Subaru Rally Team USA driver Travis Pastrana has mathematically secured his fourth consecutive Rally America National Championship with a dominating win at the Ojibwe Forest Rally in northern Minnesota this weekend. Check out the latest news in the automotive industry in Modified Magazine. 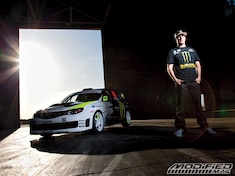 After Ken Block wowed us with his new stunts in 'Gymkhana Two", we had to have a one-on-one with him. Check out this up close and personal interview and ride along with him in his 2009 Subaru Impreza STI. - Modified Magazine