Big for a Mini but nice as anything 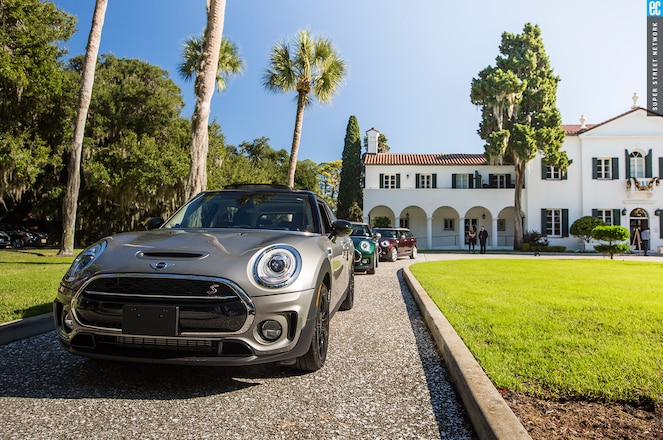 For anyone who has bought a Mini during their young, noncommittal lives, only to reluctantly trade in the car for something more practical for Jr. and Fido, I have very good news for you: A grown-up Mini for your complicated life will be available next year. Yes, the 2016 Mini Cooper Clubman has debuted, and the peppy hatchback has decided to move away from home and get a job in the real world. 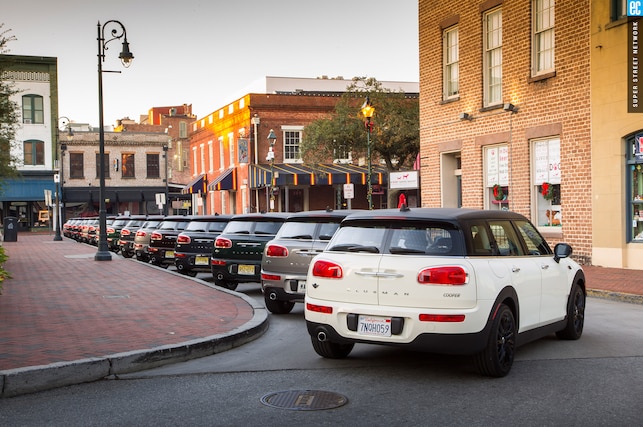 Size-wise, the Clubman is the biggest Mini (both in length and width) the manufacturer has ever made and is now dropping the "sub" and being called strictly "compact." The once diminutive wagon is now more than a foot longer and 5 inches wider than the old Clubman, however, don't mistake the car as being massive—it is still a Mini through and through. In comparison with the closest sizes in the compact market, the Clubman is less than an inch larger than the five-door VW Golf and nearly a foot shorter than the Mazda 3, which still puts the car on the shallow end of the compact car pool. But those extra inches over the previous generation gives you a much larger storage capacity with 60/40 split-folding rear seats (Mini claims it can even fit a washing machine), more legroom, shoulder room, and a much more sophisticated, albeit tame, ride than Mini has offered before. 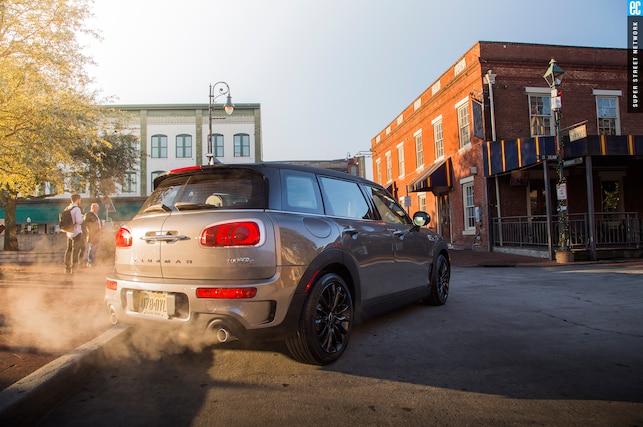 Outside, the Clubman doesn't look incredibly different from its predecessor, despite its size. The most obvious will be the ditched third "club" door in favor of a more practical fourth door, but it retains the trademark Clubman trunk split-doors only with new horizontally oriented taillights. Otherwise, as far as exterior looks are concerned, there's no mistaking the car for anything other than a Mini. Two new colors have been premiered for the car—Melting Silver Metallic and Pure Burgundy Metallic (finally, no more of that impure burgundy). Special attention has been given to trim, extending much of the length of the car, again to say, "Look at how long we are now!"

Mini has expressed its desire to pursue a very premium product with the car, and the interior shows it. The fully loaded Clubman S we drove featured plush, but bolstered, Indigo-Blue Chesterfield diagonal stitched leather seats (a $1,750 option), in addition to a nappa leather hand-stitched steering wheel. Styling cues such as decorative strips are used to emphasize the enlarged space of the car. Circles are also a large theme to the interior—from the gauges and main instrument screen to the door handles and speakers. Even the base Clubman we drove with few options offered nicely textured cloth/leatherette seats and high-quality plastic throughout. 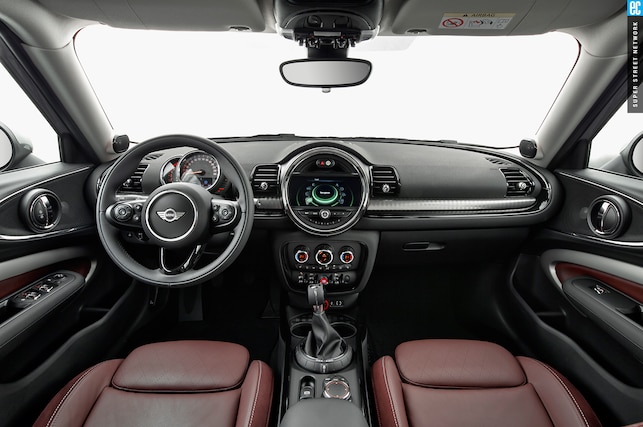 After riding in the previous-generation Clubman's rear seats for a 350-mile trip that was cramped and uncomfortable for my 6'2" frame, I was eager to try out the new rear legroom. While a marked improvement from the original, I still wouldn't be able to sit comfortably behind someone equal to my size for a long trip. Plus, headroom still is sacrificed for the sloping roof, so my head was touching the ceiling and bordering on uncomfortable. Additionally, sitting three-wide in the back, while more feasible, looks to be a cramped affair—at least for adults. The rear seats didn't seem to be nearly as comfortable as the front. On the contrary, they were like sitting on fabric-wrapped wooden blocks, with little give in the seat to speak of. For children with considerably less weight than yours truly, it may not be as much of an issue. Also, I'm sure Fido will be too distracted with the open window to care. 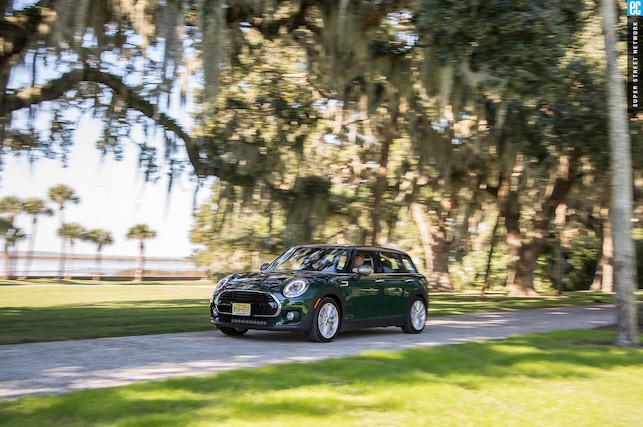 Lighting accessories seem to be another important feature to the brand, as standard ambient lighting will light up the door handles, and optional lighting will turn your car doors into disco balls. Also standard is a spotlight that shines down from the driver side-view mirror, projecting a Bat-symbol-like Mini-branded spotlight because, hey, that's cool.

Both models we drove included the optional Sport Package, which features larger wheels, dynamic damper control, and LED headlights. The package in the Clubman S costs $1,500 and gives you LED foglights, while the base Clubman throws in sport seats that are otherwise standard in the S (though the base sport seats felt much more supportive, interestingly). 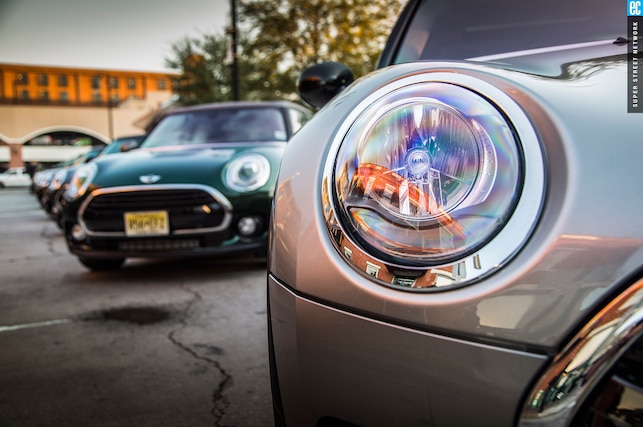 So we have a Mini that looks fancy, large, but still distinctly Clubman. But does it still drive like a Mini? In a way, it doesn't at all.

While driving both versions of the small wagon, there was a greatly reduced amount of road noise, rattles, and harshness to the ride. In fact, the ride was rather luxurious on the road and subsequently, triple-digit speeds were achieved effortlessly. One other characteristic of the Mini was also noticeably absent, but with more sadness than delight.

If you're looking for a Mini with rasp and burbles and pops like taking a small MG out for a Sunday drive, then unfortunately you will be disappointed in the new Clubman—even while in "sport" mode. But while the exhaust note may be gone, both engines (when you do hear it on acceleration, that is) still sounds fantastic.

Powering the base Clubman is a 1.5L TwinPower turbo three-cylinder engine that produces 134 hp and 162 lb-ft of torque and is mated to either a six-speed auto or, like in our car, manual transmission. The clutch was fairly light and springy, and the throws, while not long or short, were solid. The engine still offers plenty of motivation for the car; sharp inclines did result in having to shift down a gear. Driving in Sixth while doing 70 resulted in a comfortable sub-3k rpm. 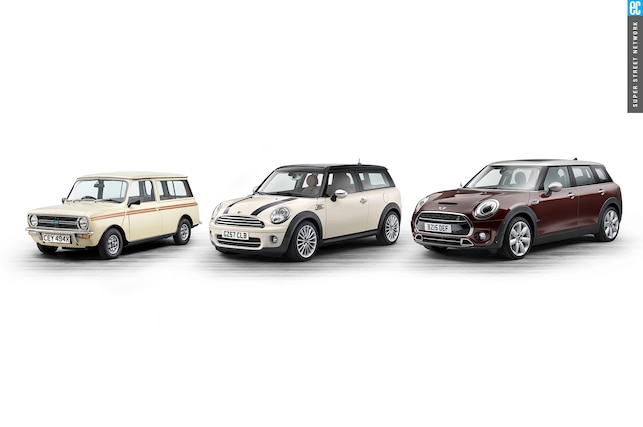 The Clubman S employs a 2.0L TwinPower turbo four-cylinder engine that produces 189 hp and 207 lb-ft of torque. The engine can be paired with a six-speed manual or the all-new Mini Aisin-developed eight-speed auto, a brand first, and what we had in our car.

Additionally, we had the "sport" version of the auto that featured paddle shifters, more aggressive timing, and upgraded components to make it, in the words of a Mini rep, "more robust." 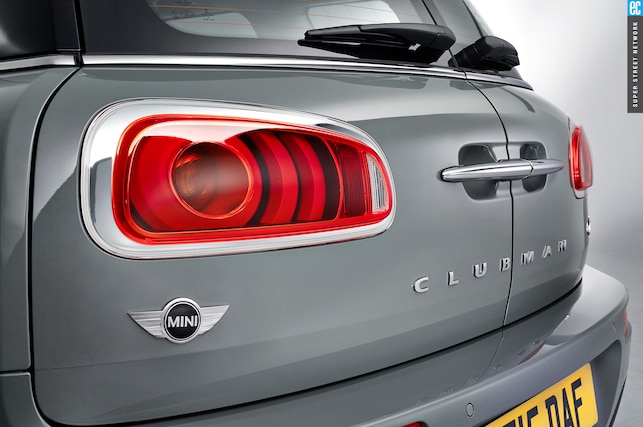 The extra horsepower in the Clubman S was certainly welcome, as we exceeded the low speed limits found in Savannah, Georgia, rather quickly and roughly 2 seconds faster than the standard Clubman. The transmission was very predictable and smooth, while allowing each gear a spirited amount of revs before shifting. The paddle shifters were also fairly responsive, making for a good substitute should the driver not desire a manual transmission.

In the base and Clubman S (which are both front-wheel drive), the handling still seemed like a Mini but predictably less responsive and go-kart-y given its 5-inch-longer wheelbase (to the prior-gen Clubman). However, the overall sportiness of the car was tough to gauge on the long, straight roads and sweeping corners that are found in abundance in the Southern states. The car is claimed to be tested on tracks like the Nürburgring and on roads in Wales, so Mini has made sure to make it as much as possible to its hatchback sibling. But not having the same go-kart feeling isn't a deal breaker anyway since chances are if you're driving the car fast on curvy roads with Jr. and Fido in the backseat, the missus will tell you to slow down regardless. 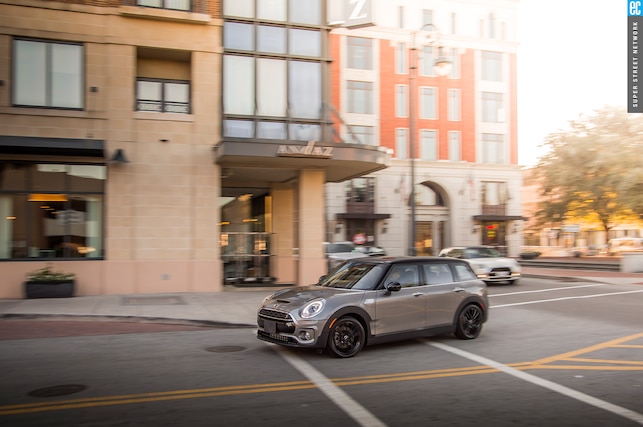 Now for the tricky news: The price for this premium fun wagon isn't exactly cheap. The starting price for a base Clubman is $24,100, while the Cooper S starts at $27,650. The base model we tested included the aforementioned Sport Package, plus the additional options: British Racing Green metallic paint ($500), Cloth/leatherette in Black Pearl ($750), Technology Package/Navigation (rearview camera/rear park distance, $1,750), heated front seats ($500), satellite radio with a one-year subscription ($300), and a $850 destination charge, bringing the total to $30,750. Our fully loaded S came with too many options to mention and totaled at $39,550.

That's some pretty serious money, but what you get will be different from what the other parents have—something unique, fun, distinctly British, and with plenty of heritage. Mini likes to call it the "cool uncle" of the market, and that may be exactly what your family needs. 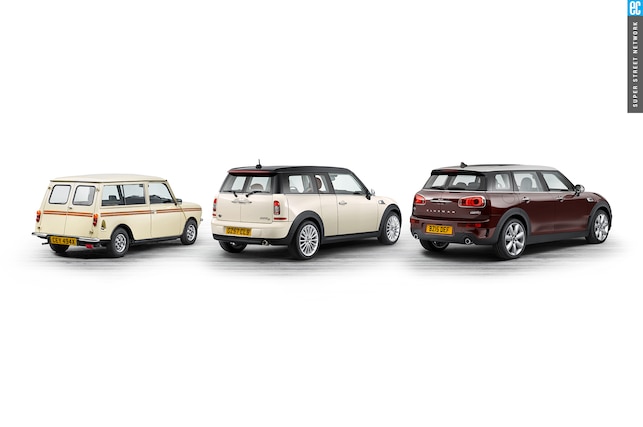