Our four year-old GTI has already experienced 90k miles and 30 shows across the West Coast, but we still have plans to make it bigger and better. 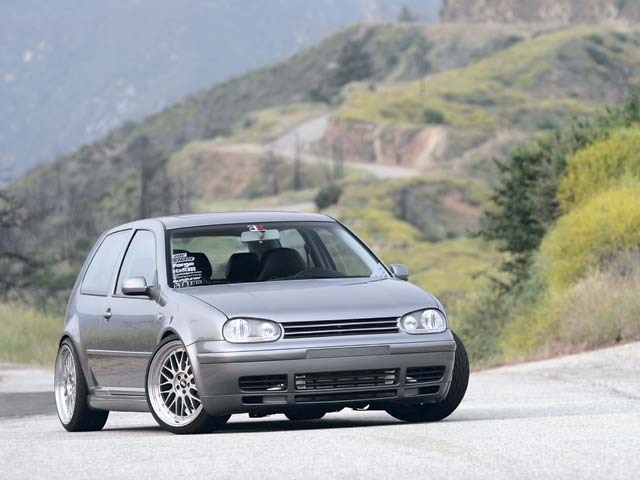 Meet our other project car; an '03 VW GTI built by me, Sam Du. You might recognize the GTI from last year's SEMA show, or from events such as Waterwagens, Hot Imports Nights and the Leavenworth Drive that have been reported on in et.

Before eurotuner, I lived in Seattle, WA where I worked at Evolution Sports (ES) as a photographer and e-support specialist. For three years the tuner shaped my vision as a European car connoisseur. As a bonus, being part of the team enabled me to try the latest products.

Although I spent four years modifying the GTI, it remains under construction. It's one of those cars that will probably never be finished. So in future issues we'll showcase new parts and continue its progression.

When I first bought the GTI, I didn't have an enormous budget to squander. I attended college full-time and the GTI was my only mode of transportation, but I saved a portion of each paycheck to fund the modifications.

The first time I pulled my car into the ES facility was to install an OE European headlight switch and rear foglight kit. The new switch disengaged my daytime running lights and enabled me to activate the city lights on command. ES then constructed their rear foglight kit for the Mk4 GTI based off my car. Not long after installing those pieces, ES developed an overhead console kit using OE VW Passat W8 parts. The console added two red LED lights that emitted a warm aura down on to the shift boot. These OEM upgrades were the stepping stones that launched my GTI towards a OEM+ theme. 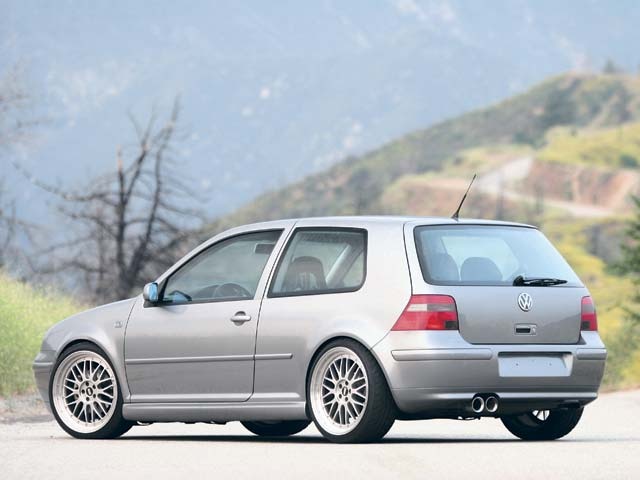 Several months later, I started itching to take things to the next level. I have always believed in the theory that a drop and a fashionable set of wheels would transform a car's personality. After evaluating my savings, ES recommended and installed an H&R Cup kit. The kit comprised matched springs and shocks, lowering the car 2". And I was happy with the improved handling and ride height.

My ultimate dream wheel was the BBS LM. I spent months browsing websites for special deals before finding a used set of 19" LMs from an Audi TT owner in Massachusetts.

At this stage, I was content with the car's appearance but the performance was still untouched. So I fitted a complete Techtonics Tuning stainless steel system. It gave the car a menacing growl and I could also feel an improvement in power across the rev range.

Next on the list was an intake. Since I was 16, I've been infatuated with big cone filters. My first vehicle was a '95 Jeep Grand Cherokee and my friends and I fabricated an enormous intake using two cone filters and parts from Home Depot. I'm not sure how much performance was gained from the contraption, but the Jeep sounded like a beast. With the GTI, I ventured towards the higher path of quality and performance. ES supplied me with its latest product utilizing a BMC Carbon Dynamic Airbox. Because I lived in Seattle, the rain deterred me from an intake where the filter sat in the bumper. The BMC system was affixed in the factory location and a flexible pipe was routed to the lower bumper vent to draw cool air, giving me a great improvement in throttle response. 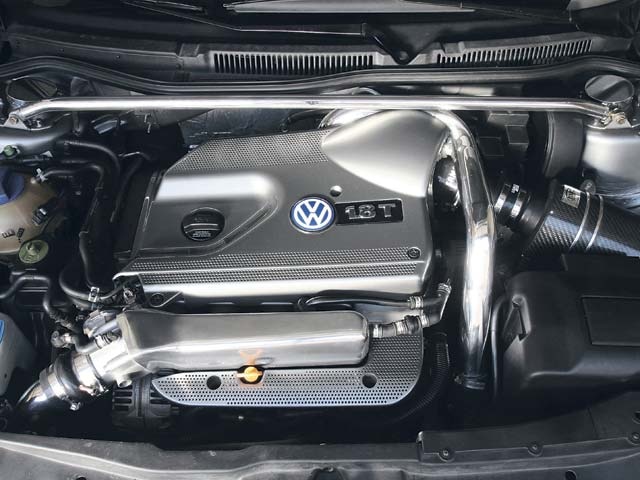 Making the most power difference was the software upgrade. Utilizing USB-flashing technology, ES uploaded the latest GIAC programming and I immediately fell in love with my 1.8T all over again. There were some slight surging issues so ES added a Forge Motorsport 007 diverter valve, 4bar fuel pressure regulator and N75 valve to make it run smoother.

While I strived for performance, aesthetics played an equal role in my overall strategy. When I planned the exterior, aggressive Rieger styling and a bser hood were my first choices. However, my experience at ES showed me that the wild and edgy look wasn't for me. Subtlety and cleanliness eventually won the day and I discovered a set of OE European bumpers with 4-Motion valances from Mike Lombardi at Forge Motorsport. Being on a tight budget, it was a relief to uncover a used set.

To complete the factory-style look I received OE Votex side skirts as a birthday present, thanks to my generous brother. I also sourced an MHW carbon badgeless grille. I didn't like the gaudy carbon look, so the grille was painted along with all the other body pieces. The hood and bumper notches were filled to cover the holes left by the emblem. I also acquired a set of OE European stubby mirrors. JM Industries in Arlington, WA completed the body and paint work. I kept the interior similarly subtle and clean. When ES debuted its gauge holders, I was ecstatic to replace the factory double-DIN head unit. The gauge holders came in black or silver - I opted for the factory appearance of the black. Monitoring boost, oil temp and oil pressure were Auto Meter Sport-Competition gauges. To make the gauges more unique, the rings were color-matched to the car. Above the gauges was a Pioneer 6.5" in-dash DVD monitor.

Status Racing jazzed up my front seats with their Laguna racing shells in carbon/kevlar and leather upholstery. I would've never imagined to daily-drive in racing seats but the stylish comfort of Status Racing is exceptional. I've always strived to do things right on my first attempt. I have only changed one part - the Cup kit. After a year of driving, I felt the GTI still sat fairly high so upgraded to H&R coilovers and have been extremely happy ever since. Stay tuned for future installments on the car, including upgrades to the turbo, brakes, audio and more. I've already started preparing for higher performance with this month's tech story. We fitted an Evolution Racewerks front-mount intercooler and I'm very happy with the improved throttle response and visual aspect before we've even touched the boost.