The frightening task of redefining an icon It's official. With the '17 911 Carrera lineup, Porsche has altered the fundamental formula of its legendary sports car. This isn't the first time this has happened, of course—in the '90s, the 911 made the transition from air-cooled engine to water-cooled, and in response, doomsayers everywhere crawled from their holes to preach the end times for the model. 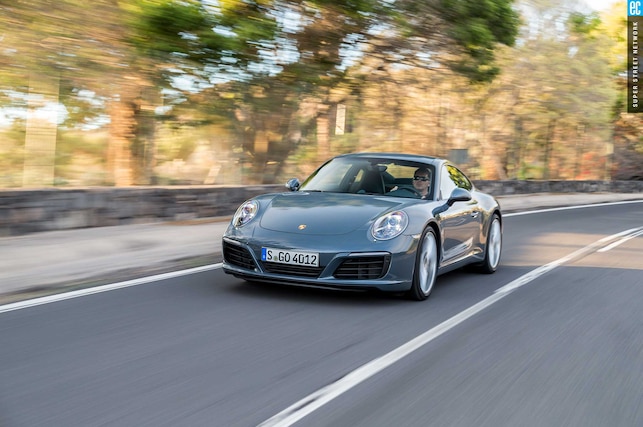 Now, in retrospect, we realize the 911 was a force too great to be defeated by such a change (in fairness, the old models do have a uniquely intoxicating character that has never been seen since), but it was shocking nonetheless. And now it's happening again, as Porsche has just made a change that's arguably even more significant: Starting with the '17 model year, all 911 variants will pack turbocharged engines in their rumps. Like in so many other great performance cars, the naturally aspirated engines we've known and loved have just gone the way of the dodo bird.

Upon hearing Porsche had prepared a few of the new cars to check out, we wasted no time flying to the little-known island of Tenerife to try them for ourselves, and came away with some remarkable impressions—both of the cars and the location Porsche picked to show off its latest goods. But first, let's go over some of the new details. 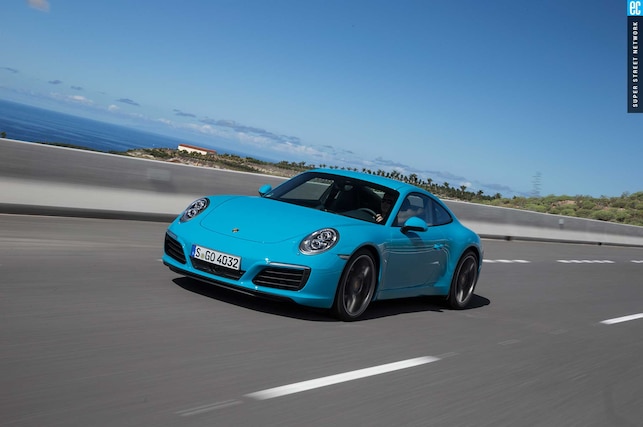 If you consider the upper-tier 911 Turbo models that have been around for decades, then sure, it's nothing new to see a turbocharger (or two) spinning inside a 911. But to use turbocharged engines across the entire model line as standard equipment? That's a major change in both design and character. While it still remains a flat-6 in configuration, it's now 3 liters in size rather than 3.8. Compensating for this drop in displacement is a pair of turbochargers and some fancy engine tech to make them work happily. The end result is a peak output of 370 hp at 6,500 rpm and 331 lb-ft of torque on tap anywhere between 1,700 and 5,000 rpm. The new S variants turn up the wick even further, to a beefy 420 hp and 368 lb-ft of torque. 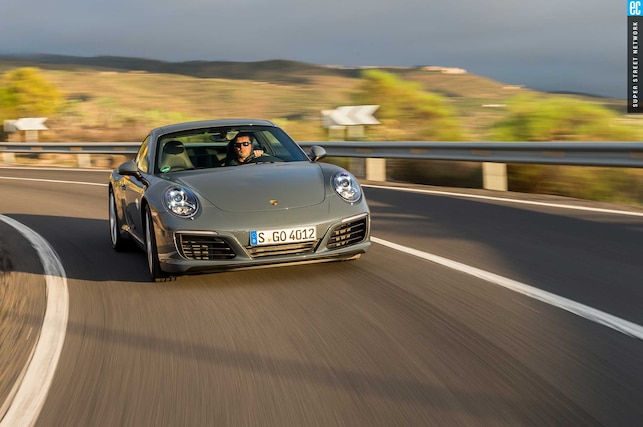 Another noteworthy update for 2017 is the inclusion of PASM (Porsche's active suspension system) as standard equipment for all models. This enables the Carreras to sit 10 mm lower than before for maximum performance character, with a system to raise the front in seconds on an as-needed basis to clear bumps or steep driveways. 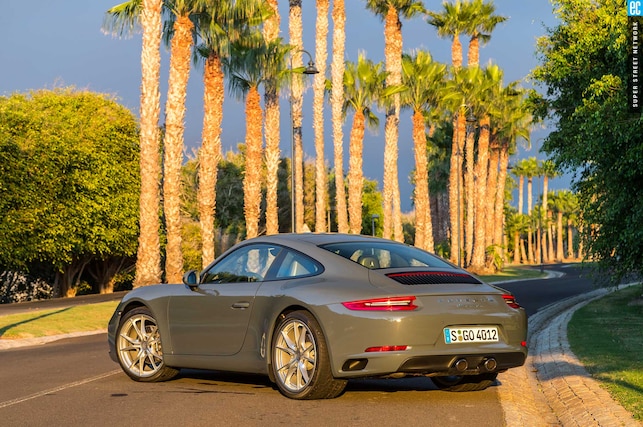 Getting back to our island fun time with the new cars—for starters, we can safely say that any doomsaying you may read is merely alarmist nonsense, just as it was with the last major change. The new engines work beautifully in these cars. The 911's ability to somehow get better and better with each new iteration is often cited, and that holds true for 2017. The new 911 models are great to drive. 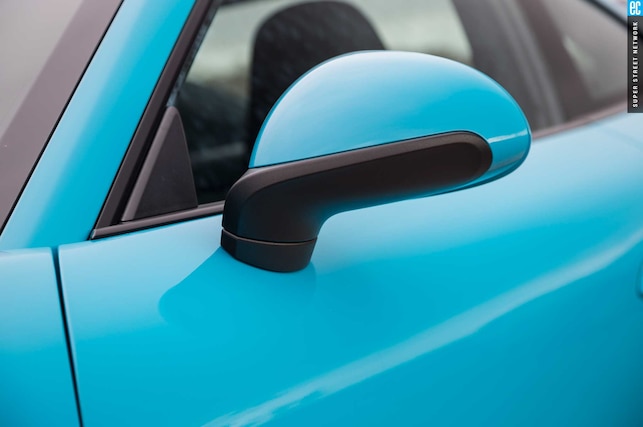 Yes, you can tell they're turbocharged and, yes, it feels different. It's particularly weird to hear the turbochargers as they spool up (which is unexpectedly noticeable), especially at such a low rpm. But that strangeness is quickly forgotten with the first jab into the throttle. Thanks to the new torque curve (if you can even call it that), there is always a rush of power available, and it feels much more brutish than before. You're always in the meat of the powerband.

Tenerife was a memorable location to try out the new cars and an excellent choice for some spirited driving, with its dramatic elevation changes and smooth, swooping roads overlooking the Atlantic. Blasting the 911 up each hill never got old, and the tighter twisties really let the cars' dynamics shine. As expected, handling was tremendous—unfettered by pavement aberrations and tenaciously grippy. That said, we tested variants with and without Porsche's rear axle steering system and frankly found it nearly impossible to tell what was due to that and what was simply due to great chassis design. If it was making a difference, it was doing so very unobtrusively. 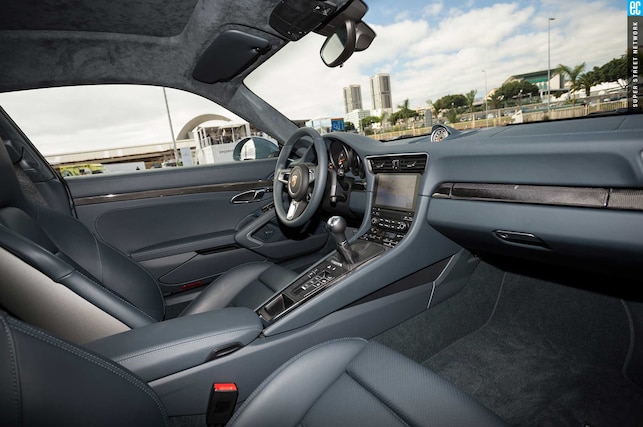 Additionally, like most old-school car nerds, there was some inevitable lamentation over the feel of modern electric steering, but we tried to keep it to a minimum. EPS is here to stay, and this is one of the better examples. Turn-in is incredibly quick and responsive and the car simply goes exactly where you point it. We just have to accept the lack of tactile feedback when compared to predecessors—like the 997—as a casualty of modern technology. 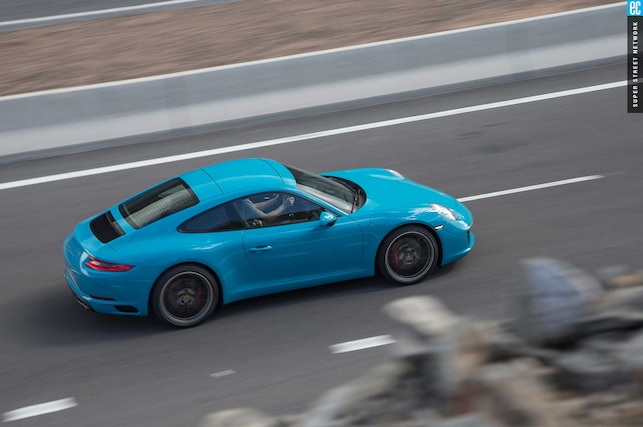 We also tried both transmission variants and came away with mixed feelings of a similarly nostalgic vein. The PDK is "better" on all technical levels—it's lightning fast, buttery smooth, and smartly programmed. We often run into extremely technologically advanced automatic transmissions paired with half-baked algorithms—the math is the hard part. Here, the math is the masterpiece—we dare suggest it has some sort of mind-reading technology onboard. If you have access to a racetrack and are looking to work on shaving your lap times, the PDK will get you around faster. But in an age where nearly all car control is being parsed into computer algorithms, there's something truly delightful about using a manual transmission and clutch on a car like this. A direct mechanical path to the car's beating heart and the road—a tangible and organic connection. Of course, it also helps that the 911's shifter and clutch are perfection to use.

While not considered an entirely new generation, these 911s can be distinguished fairly easily from outside as well, thanks to things like the vented area in the rear or the updated taillights. On the inside, things remain largely the same, although there are some new 918-inspired steering wheel choices and tweaks to user interface stuff. Otherwise, it's the cabin you'd expect—which is to say, impeccable. 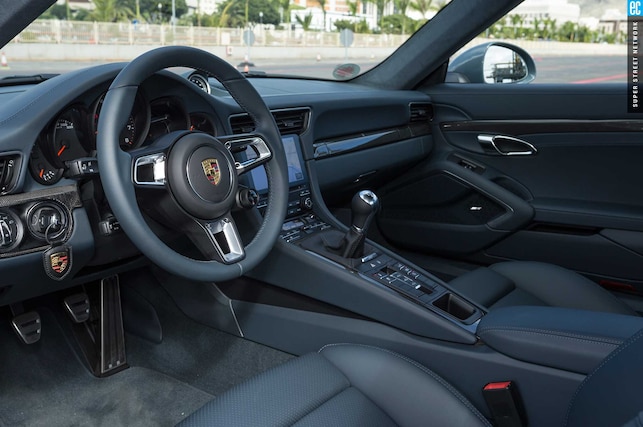 Unfortunately, a casualty of further refining the breed is the price. The 911 Carrera costs $5,100 more than the outgoing 2016 car, at $90,395, while the Carrera S sees an increase of $4,500, making it officially a six-figure purchase at $104,395. To stomach the price hike, you have to look at the purchase the way Porsche wants you to—the value play. Porsche says, when comparing the new Carrera (non-S) to the outgoing car, you're getting more for your buck. Sure, it's 6 percent more expensive, but when you account for all of the updated/added equipment, it's actually 3.4 percent cheaper. 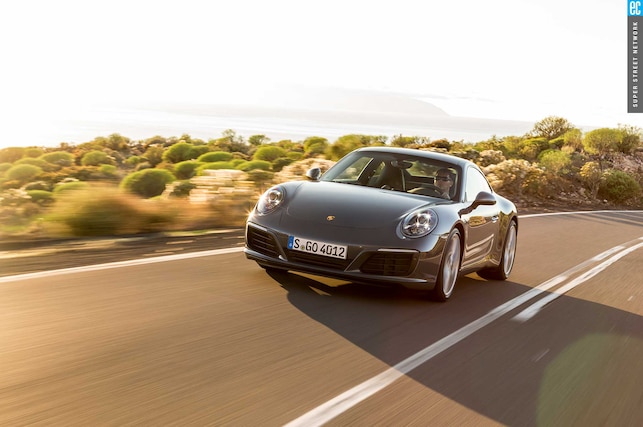 Porsche has a point, sort of. You're getting more horsepower out of a brand-spankin'-new engine. You get PASM standard (more on this in a bit). If you opted for the PDK, you're getting (even) better transmission programming and a coast function. You get a (much) better nav system, blind spot warning, park assist with reverse camera, and connect plus as standard. Porsche says there is a plethora of little changes throughout the car that you'd never be aware of, too, like a greater use of aluminum in the chassis, thicker brake rotors, and so on. But the thing is, you can say all of those things about most new cars. There's a sort of inevitable march of (technological) progress that's going to happen anyway, right? Do we bill for that now?

The glaring exception to this gripe, provided you want it, is that you're getting PASM as standard in the non-S this time (it was a $2,090 option on the '16 non-S). Porsche says it's better this time, too, with a wider range of adjustability. You'll really feel the difference when you change the settings. Small caveat: You can't have Sport PASM optionally on the new non-S (it was an $890 option on the '16 non-S). Gotta have a Carrera S for that now. But anyway: What if you didn't want PASM? Where's the stripper 911? 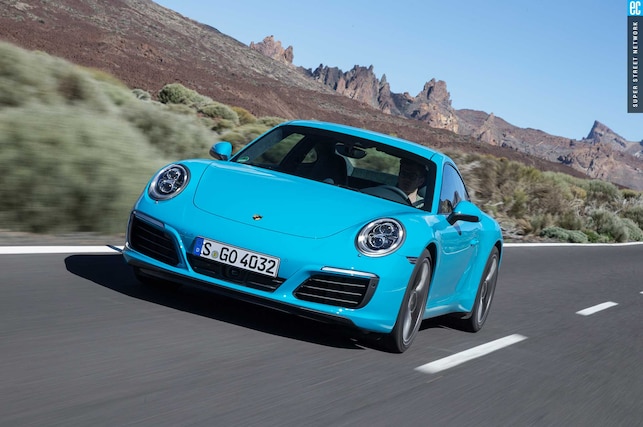 This entire debate could go on for pages and is academic, of course, because Porsche knows its customers will pay more—you might even say it hasn't even started to find the limit of what they'll pay. But even if "the man" is out to get you and 911 pricing has been on a ramp into the sky since the 2000s, what, really, is the competition? To get into a Ferrari, you're doubling the money (at least). Get into a Jag or a Vette and you own something that's half as polished. An AMG GT? Really? 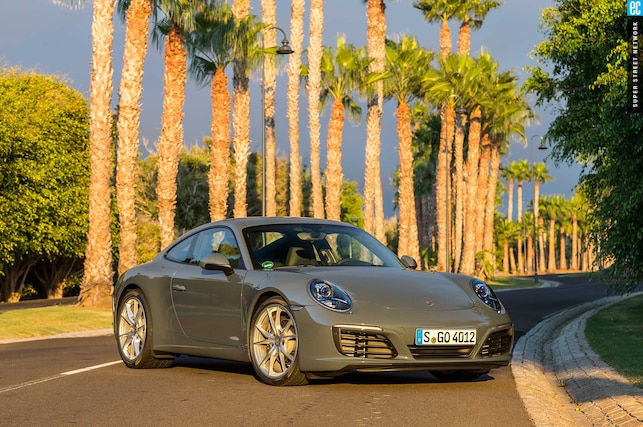 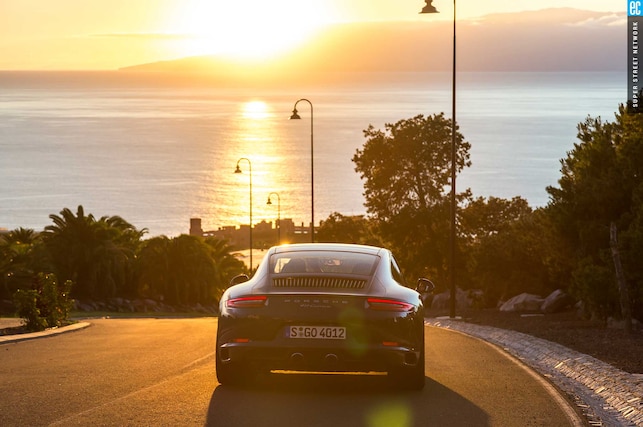 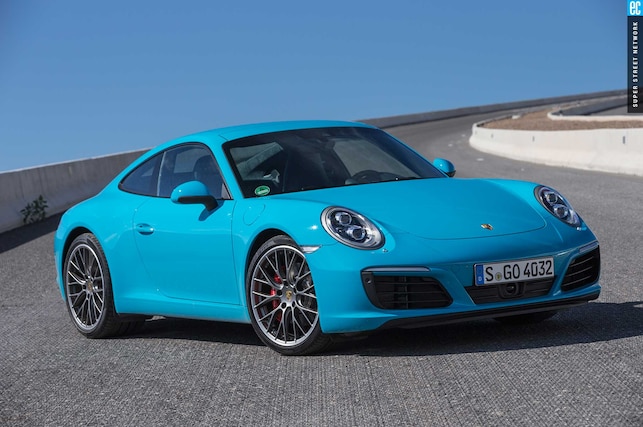 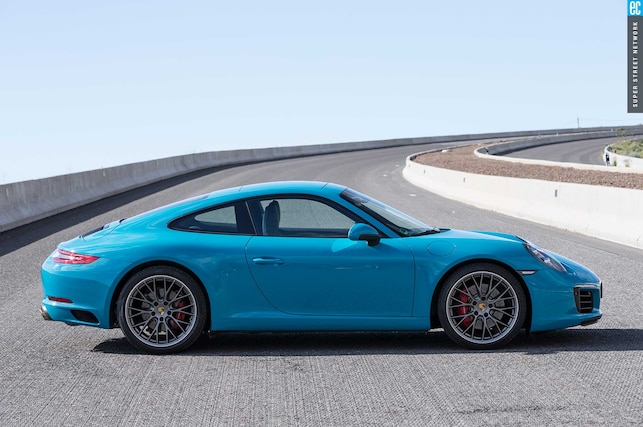 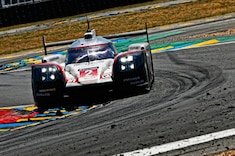 Toyota proved one thing at this year's 24 Hours of Le Mans: nothing is guaranteed. Get a summary of the entire race right here. 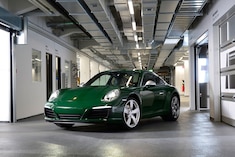 One Millionth Porsche 911 is an Irish Green Carrera S

The one-millionth Porsche 911 has rolled off the assembly line in Zuffenhausen, 54 years after the first of the now-iconic rear-engine coupes. 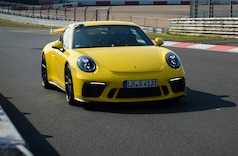 The new 2018 Porsche 911 GT3 beat its predecessor around the Nürburgring Nordschleife by 12.3 seconds. Get all the details here. 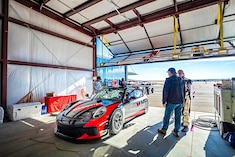 We drive one of if not the first 2017 Porsche 991.2 Cup Car in the United States to see if it is truly the ultimate incarnation of the 911. 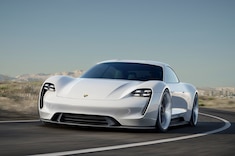 Porsche top five design concepts are more toned down, but the designs still achieve what other, wilder concept cars set out for. Take a look. 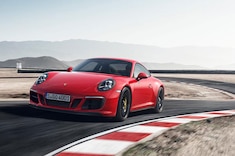 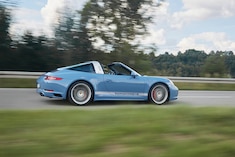 The Porsche 911 Targa gets even more retro with this limited-edition model painted in Etna Blue, a color made famous by the Porsche 356.