The Recipe for Conquering FF Battle

The thing that separates a winning race car from just about everything else is the sum of its parts. The ability to go faster, turn better, and stop quicker isn't always prioritized. Overlook how much power you ought to be making, for example, and everything you did to get you into those turns quicker and force you to stop harder might only be enough for fifth place. And nobody's ever been happy with fifth place.

For race cars, things like power-to-weight ratios rule. Being different for the sake of getting recognized on Instagram never earned anybody a spot on the podium. Which is what led Angel Torres and his FF Battle–winning Nemo's Garage Civic to Honda's most capable four-cylinder engine yet—the K20A.

Cylinder pressure's what makes horsepower, and there are all sorts of ways to go about getting more of it. For Torres, an Eaton TVS (Twin Vortices Series) supercharger was the answer. Eaton's TVS blowers are different than any other Roots-type supercharger you might be used to. Here, a pair of four-lobe rotors, twisted 160 degrees around, compresses the intake stream, but without all of the heat you'd expect from your grandpappy's blower. Like any positive-displacement supercharger, exceptional volumetric efficiency at low engine speeds is a reality. Unlike most Roots-type blowers, though, the MercRacing intake manifold that adapts all of this to Torres' top end includes provisions for an air-to-air intercooler. In other words, Torres has access to most of his power anytime he stabs the pedal, but without the drama often associated with Roots-type blowers. "There's zero lag," he says, "which makes for very predictable throttle input." It's also good for 400 hp and 265 lb-ft of torque, which'll never be a bad thing.

For the long-block, Torres looked to longtime K-series expert John Grudynski of HyTech Exhaust who also orchestrated the exhaust manifold that features a unique 2.5- to 2.75- to 3-inch stepped design that's been tailored specifically for how spent supercharged exhaust gases like to behave.

On their own, the rest of Grudynski's changes might seem small, but together they lead to the engine being the least of Torres' concerns while on the track. For example, Grudynski specified custom domes for the engine's CP pistons to allow for an uninterrupted flame front and more torque. Even the oiling system was modified to ensure proper lubrication not just at high rpm but while idling. Other parts of the engine remain surprisingly stock, however, like the timing chain tensioner that Grudynski says won't fail so long as inferior aftermarket cams aren't used.

In terms of transmission gearing, it's about as short as you can get and is made up of internals from Gear-X along with the factory Type R's 4.7:1 final-drive gear. According to driver Yuta Akaishi, it all seemed very much "unnaturally short" at first, but in time proved invaluable. "As I grew more comfortable with the car," he says, "I found that it worked very well in conjunction with the instant torque delivery of the supercharger."

Nobody's walking away with FF Battle honors without a seriously modified suspension. At the core of the Nemo's Garage Civic are Eibach's Multi-Pro R2 coilovers that are made up of mono-tube shocks with remote reservoirs that mean more fluid can be displaced, which results in more sensitive and consistent damping. And the stiffer the chassis remains, the better those shocks are able to do their thing. For that, Torres appointed the hatchback with a Nitradyne rollbar that's been welded in place, a Miracle X brace out back, and an ASR rear subframe brace underneath. The suspension's also been tightened up with bronze bushings from PCI that eliminate the flex normally associated with Honda's rubber pieces.

Experimentation with the car's alignment has, thus far, remained minimal. According to Akaishi, aside from introducing more negative camber up front to help shift cornering grip to the appropriate end, just about anything else that can be adjusted has been left alone. "We actually didn't have any time to test damper adjustments that day," Akaishi says, referring to last year's FF Battle. "It was decided that we'd likely see more positive results by leaving the setup alone and [instead] concentrating our time on adapting my driving style to the car."

Aside from the J's Racing GT spoiler in the rear, aero changes are few, which, according to Akaishi, makes perfect sense for what he says is essentially "a street car that's [able] to stand out at any car show and hold its own at the track." What the rear wing does do, however, is important, and that's to allow for better stability when exiting turns by introducing downforce at the tires.

Both Akaishi and Torres will tell you that a bit more strategically applied aero will help even more, too. Heat concerns meant ditching the front bumper for the day. According to Akaishi, he suspects "a bit of lift" may have occurred up front, which, as a result, can muck up traction and throw an otherwise good car off balance, but a Koyo radiator and proper ducting mean cooling concerns have since been settled and the bumper and splitter are back in place.

The Nemo's Garage Civic was the car to beat at FF Battle, but it wasn't necessarily bred for that purpose alone. Driver Yuta Akaishi sums it up best: "Although we discussed the possibility of making more in-depth changes to the car in preparation for FF Battle, aside from the minor adjustments to the alignment and the addition of 16-inch wheels to accommodate the Continental tires, the car was left in the same state as it would've been for a cruise to the beach or to be displayed at Wekfest. To me, that's the most impressive thing about this car. I've driven my share of purpose-built cars—machines assembled in the interest of simply accelerating, turning, and stopping as efficiently as possible. There is, however, a whole new level of satisfaction felt by piloting this car with its immaculate paint, beautifully upholstered custom interior, and smooth power delivery. Had I not known about its various car show awards and previous magazine feature, once I strapped into the cockpit, the car would've made damn sure that I did know it was more than just fast. Sure, it could handle flying around a racetrack and take top honors that day, but there's more to it than just a lap time." 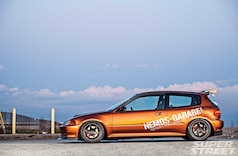 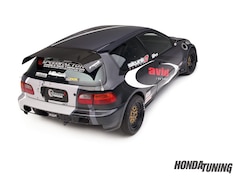 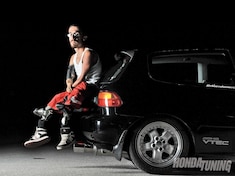