How Sung Kang's Datsun 240Z aka Fugu Z came to be 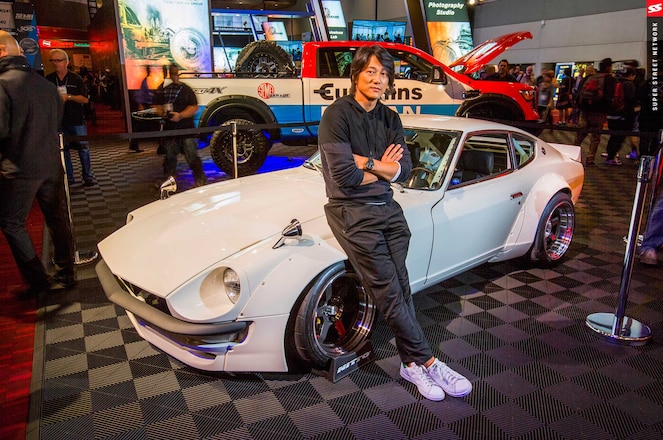 Fugu Z is a bit of an anomaly. On one hand, it is single-handedly one of '15's most celebrated project cars. On the other, it is just that: one person's project car, albeit a very famous person's cherished project. If you were to strip away all the hype, the media (social media in most of this) coverage, flashing lights, and everything and everyone it took to get Fugu Z where it is today, it's nothing more than a simple S30 chassis and its most basic essentials: a motor, suspension, a somewhat there interior. Regardless of these things, Fugu Z is a great project with a sincere backstory. 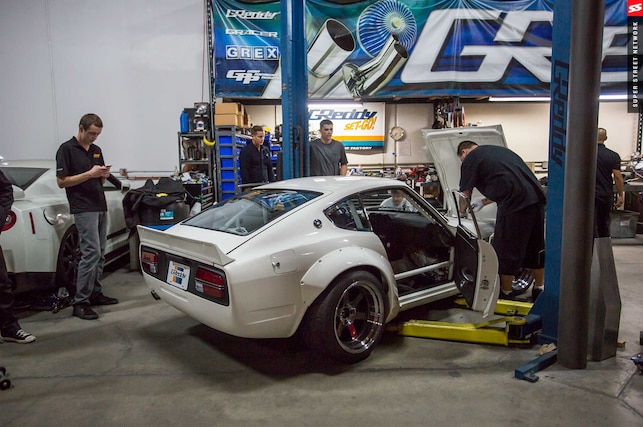 Photo 2/11   |   The team at GReddy worked around the clock to finish the Fugu Z before its unveiling the week before SEMA in Orange County.

Aside from being a project belonging to Sung Kang (yes, that Sung Kang), this car represents more than its famous owner. There are plenty of things you can see online to give you more than you need to know about the who/why/what of the build, and it would be beyond repetitive to repeat it here. To those thinking he used his status to build a car for free, you'd be dead wrong. Did his name help establish the right connections to build one of the best projects to come along in recent memory? You bet your ass it did. Fugu Z wasn't intended to become a SEMA sensation. It was supposed to be a car three best friends could work on together on weekends with the one hopeful intention of taking it to a track event. It just so happened that it would evolve into the phenomenon it is now because of the team that came to be, to help bring it to life and far beyond a weekend racer. 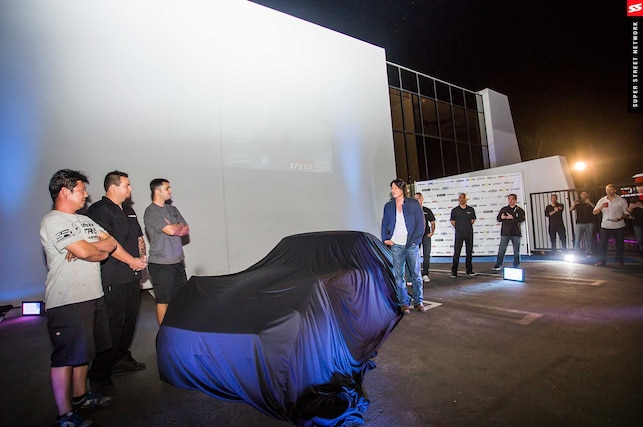 Photo 3/11   |   Sung Kang did the honors of showing the world the finished product at GReddy HQ.

In the very capable hands of GReddy is where this story really begins to take off. Sung took a couple tries but found the right donor car in Southern California, the perfect donor car that had no major accidents and needed but a little love to get it where it is today. Together, Sung (with his two best friends) with the guidance of Kenji Sumino (and support of the GReddy team), pulled everything off the car, had the chassis stitch-welded, the incoming engine lined up for proper fitment, and a custom rollcage set in place, all before it could be sent to Signature Autobody's for its paint restoration. That silky Kilimanjaro White paint—it's an original Datsun color. And the aero—a very appropriate Rocket Bunny/Pandem creation, one that fits the Z's original lines nicely. 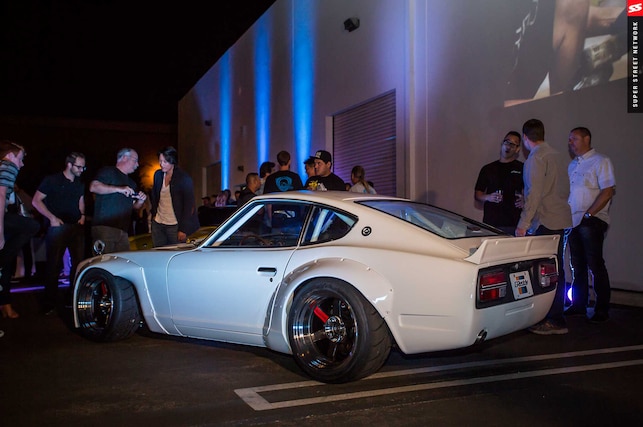 After spending a little time in the paint booth, the Z made its way back to GReddy, where the countdown to finish the car in time for SEMA begins. One by one, it goes back together. First, it's the suspension and brakes, a rather simple setup with coilover struts/adjustable ride height springs, new controls arms, and stiffer bracing. The good thing about a restoration like this, particularly on the S30 chassis, is that it needs very little in the way of parts to get it up and running. The brakes are large, nothing overkill, fits into the Volk Racing TE37s and beefy Nitto tire setup perfectly. Other small touches, like the custom Fugu Z calipers, are a very nice addition to the overall theme. 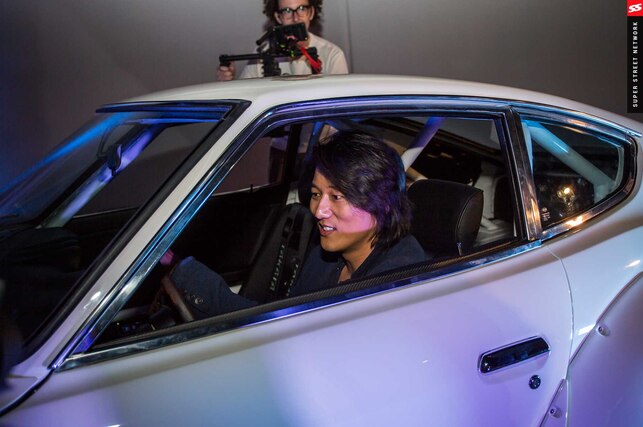 The engine bay is another one of Fugu Z's most dynamic features. OK, so this isn't rocking some period-correct L-series—even the RB26 has been decommissioned to go without its turbos. It's not so much a decision of trying to be different with a naturally aspirated RB26 with individual throttle bodies, but more in keeping true to the older Z's legacy: The RB keeps it Nissan but the more famed Z's were carbureted or had ITBs. Additionally, the cylinder head (and nearly half the motor) is set up for lower compression, which negates having the need for turbos. The engine design, exhaust, and tuning are all extremely unique to Fugu Z, which makes this N/A RB26 even more special. 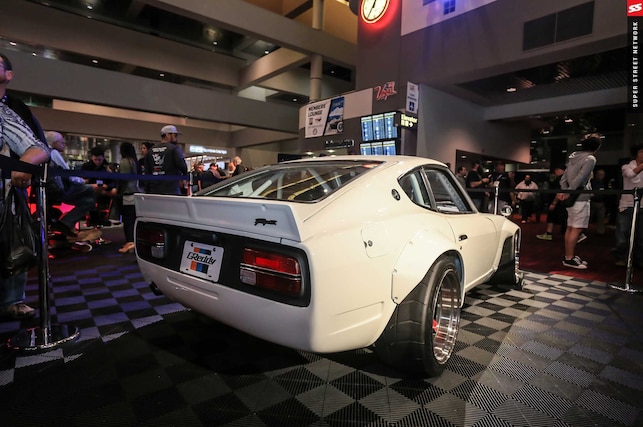 Photo 6/11   |   Front and center on day one of the SEMA show. The Rocket Bunny/Pandem kit simply looks just right with this car...

Fugu Z's interior is a minimal display of new-school craftsmanship on an old-school template. Most of the pieces were sent to Dubai for custom carbon-fiber accenting or leather reskinning, and the gauges, steering wheel, and bucket seats all have custom Fugu Z logos. No stereo equipment, it's not needed. This studio space is all for the driver (and a lucky passenger) to explore on an open road... 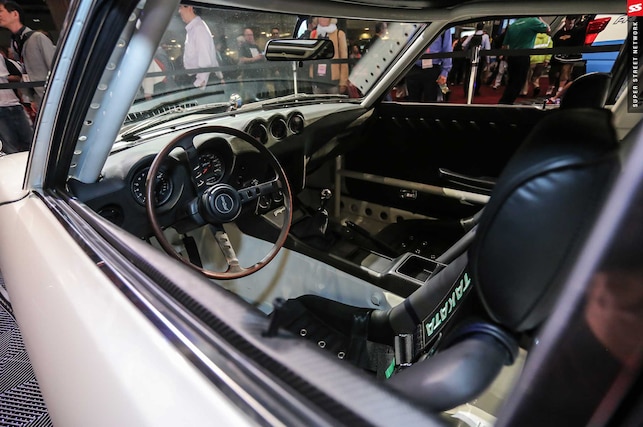 Photo 7/11   |   Upon closer inspection, you can see the precision on the rollcage and the beauty of the carbon-fiber interior.

Completing Fugu Z was not without its small hiccups. Up until the weekend before SEMA, leading up to the reveal party at GReddy's headquarters in SoCal, the GReddy team literally worked around the clock to have the car start up in time for the covers to be pulled off. The engine's kinks were worked out, a light tune brought it to life, and the last remaining Fugu Z emblems were proudly put into place by Sung himself. You could see the excitement in his eyes and you felt every emotion as he and the GReddy team introduced the car to the public that night. But the car still had one final destination: SEMA. Though the original intent was to drive the car from Orange County to Las Vegas, since the engine wasn't finely tuned, it had to be towed up. Along the way, Sung did manage to stretch Fugu Z's on some of the desert's open roads, and once in Sam Du's hometown, took a few victory laps on the Strip before it was time to bring it inside SEMA. 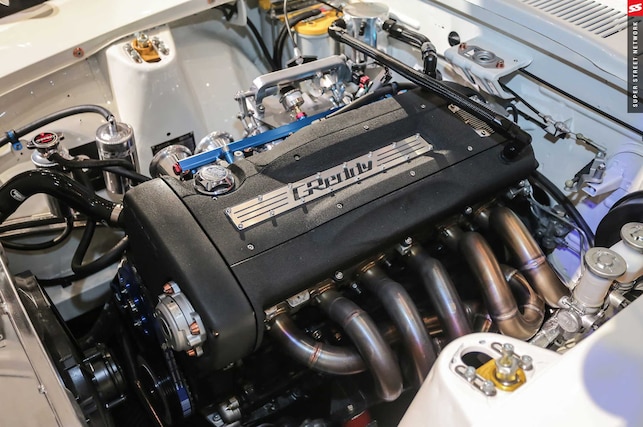 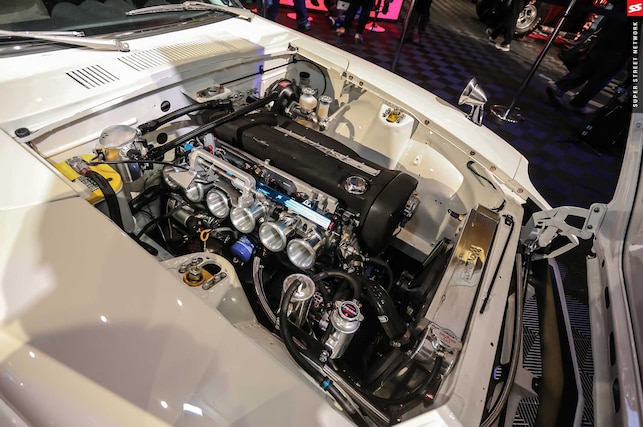 At SEMA, it was obvious that Fugu Z was the star of the show, which is particularly rare these days for an import in a massive sea of finely crafted domestics and the onslaught of modified trucks. The crowds gathered for a closer look all week long, some curious to see the owner but most purely for the car. It even caught the attention of a certain Kazunori Yamauchi, a game designer you know best for having created the Gran Turismo series, who at each SEMA goes around to find the best cars for each of their respective categories in an effort to award a "Best in Show" grand prize—this winner gets to have his car featured in an upcoming release of the game. Fugu Z nailed the "Best Asian Import" trophy and at the GT Awards party was unanimously given the "Best in Show"; it's guaranteed you will have the ability to pilot your own Fugu Z in the near future. 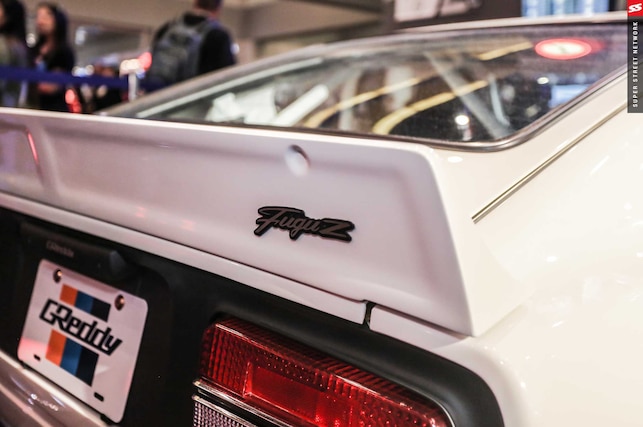 Photo 10/11   |   The word "Fugu" refers to a cut of poisonous blowfish sushi. If not prepared correctly, the sushi can kill you. Sung carries this ideology over to his Z—don't prepare a car properly and it can kill you as well!

Though Sung, the GReddy team, and his friends were all surprised and excited by the outcome and positive feedback at SEMA, this is merely the first stage in a long life we expect from Fugu Z. More seat time and tuning are needed, and there is the original mission, to bring the car to a track for a bit of weekend fun. Bringing the car past its stanchions, out where it really belongs...that may be (and we hope is) where Sung feels most connected to his car. 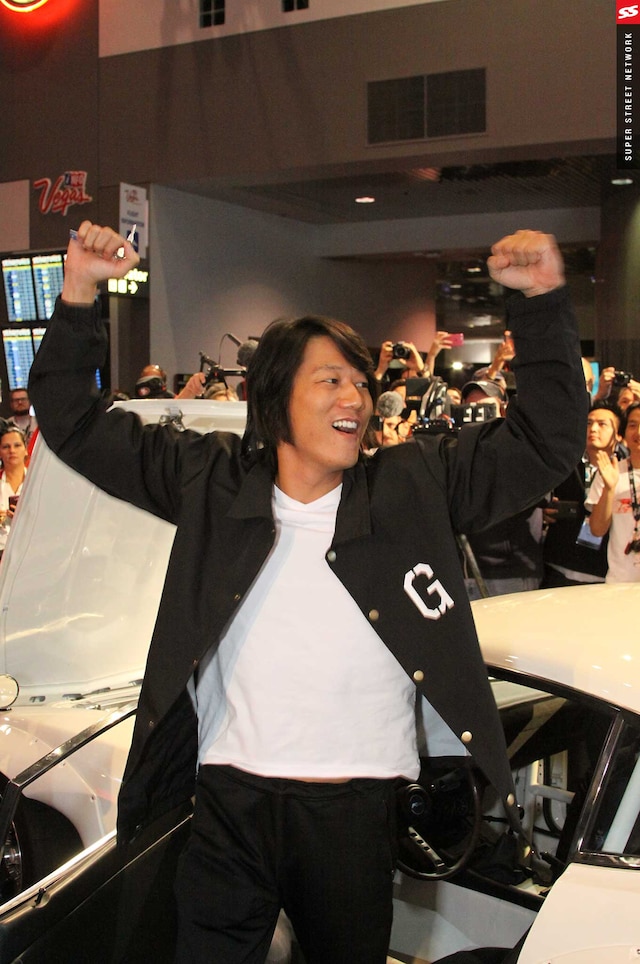 Photo 11/11   |   Upon hearing the news that we saved a bunch of money on our car insurance.
View Photo Gallery (11) Photos
SHARE ARTICLE
SuperStreetOnline 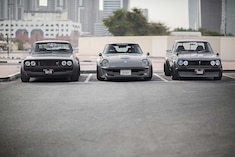 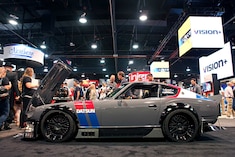 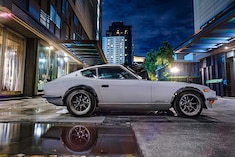