Home  |  Features  |  History of the Toyota Corolla
Subscribe to the Free

History of the Toyota Corolla 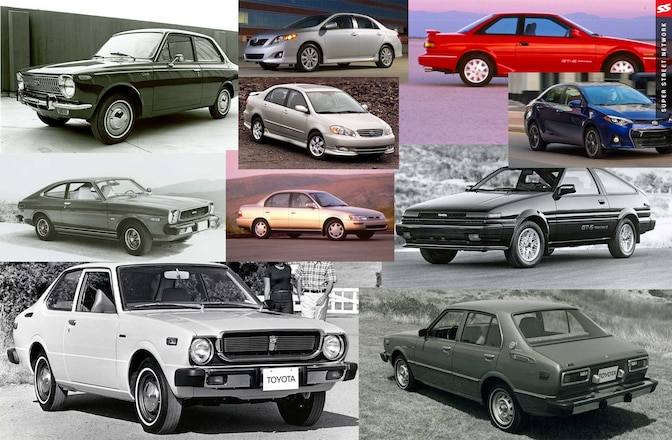 If you change the oil every once in a while and don't drive it off a cliff, Toyota's Corolla might last longer than any other car you've ever had. Which is precisely why more Corollas have been sold over the past 50 years than any other car on Earth.

Like anything that's spanned five decades, though, the Corollas changed. A lot. From the historic, pushrod-powered relic you've never seen, to the rear-wheel-drive AE86 that you want, to the grandmother-friendly sedan that it's become, the Corolla has had an amazing life. Here's a little history lesson for you, starting from year one. 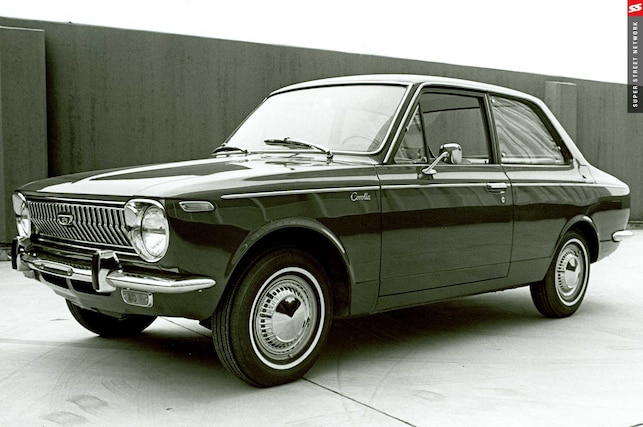 Toyota began manufacturing the Corolla in '66 but didn't export the model to the U.S. until '68 for the '69 model year. Few cars are simpler. Or smaller. Or less powerful. But a 60hp, 1.1L engine was all the first-generation body really needed and, although today the words Toyota and reliability are synonymous, the truth is the Corolla's simplicity meant there just wasn't a whole lot there that could fail. North American options were few and it didn't matter. In '68, roughly $1,700 got you something with pushrods and a carb, a solid rear axle and some leaf springs, and your choice of a four-speed manual transmission or nothing at all. 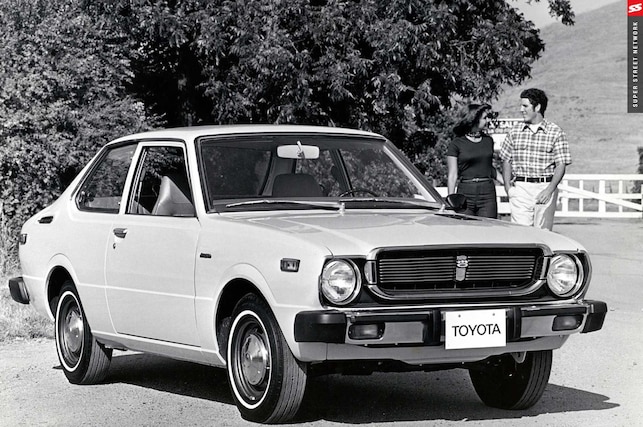 What does it take to become the second-best-selling car on the planet in the early '70s? Apparently, a slightly longer wheelbase, 13 more horsepower, and an automatic gearbox. Later second-generation models got an even more powerful 1.6L engine and an available five-speed automatic transmission. Outside of the U.S., Toyota introduced the Corolla Levin and its counterpart, the Sprinter Trueno-both performance-minded versions of the compact that featured its first twin-cam engine and foreshadowed a deep history of American car buyers getting the shaft. 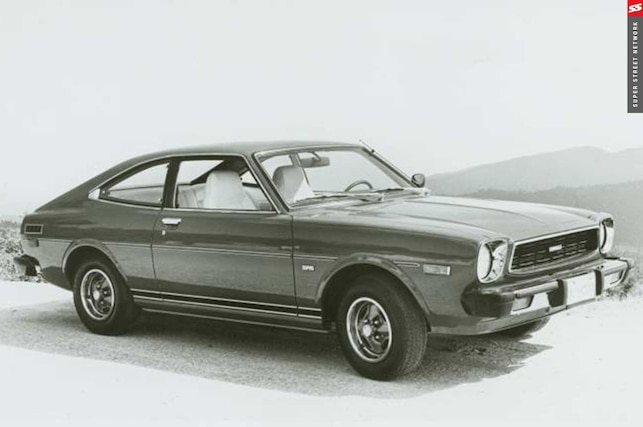 For '75, five different versions of the Corolla were available, and all sorts of important things like catalytic converters and SR5 trim designations were introduced. The third-generation's life span also marked one of Toyota's strongest growth periods in the U.S. In '76, Toyota introduced the Corolla Sport Coupe, an all-new fastback that signified what the Corolla might later become (and then turn away from again). 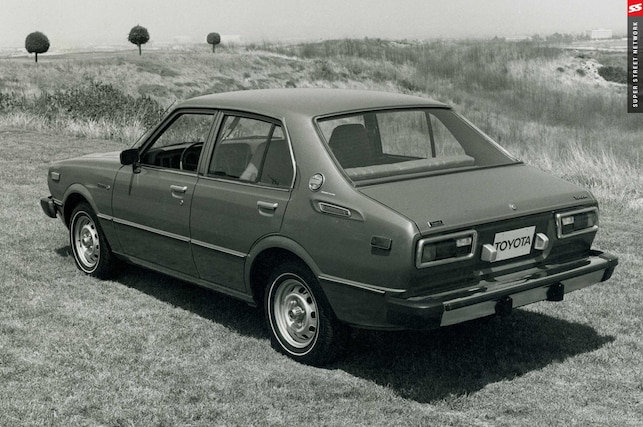 The big news for the fourth-gen model came in '83 when Toyota got rid of those wonky OHV engines for aluminum cylinder heads and an SOHC design where the cam's up top in its rightful place. Fuel injection was also added that year, but only if you lived in Japan. Unless you had a wagon, now you'd be sitting on coil springs instead of leafs, and, dimensionally, you'd be parked inside the biggest Corolla yet. 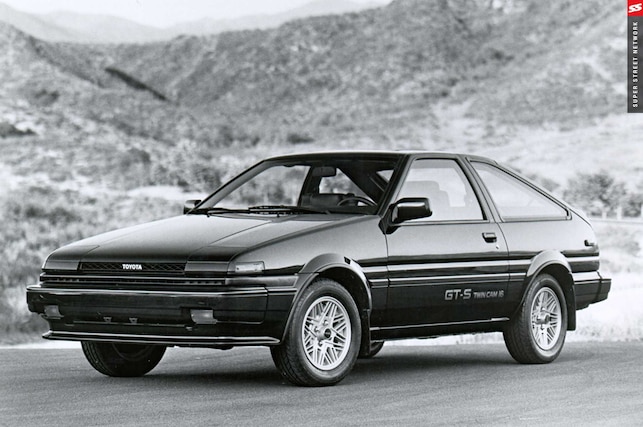 For the first time ever, Corollas were available with an optional FWD layout. But all you care about is the RWD GT-S-also known as the AE86-offered in coupe and hatchback variations and with a 124hp twin-cam engine (see our favorite AE86 builds of all time on page 68). The GT-S and its 4A-GE engine have both proved their historical value, having been used in multiple motorsports genres, the most popular of which has been drifting. A crossbred version-the Corolla FX16-was also offered this time around, featuring the GT-S's DOHC mill but with a FWD gearbox. 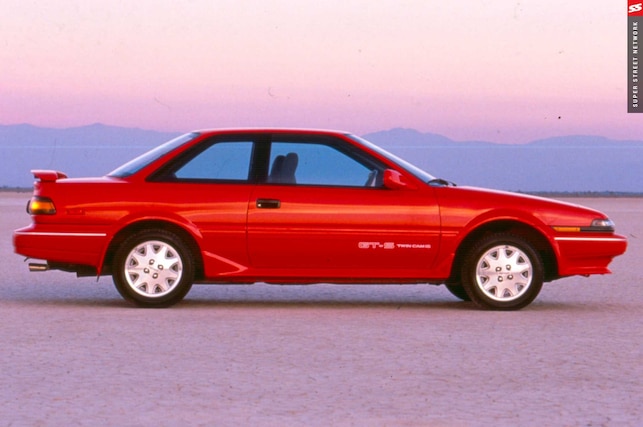 Say hello to '88 and goodbye to the RWD Corolla. Standard now was an assortment of 16-valve DOHC engines-some still carbureted-fully independent suspension all around on some models, and even an AWD All-Trac version of the sedan and wagon. It was also sayonara for the coupe following the '91 model year. 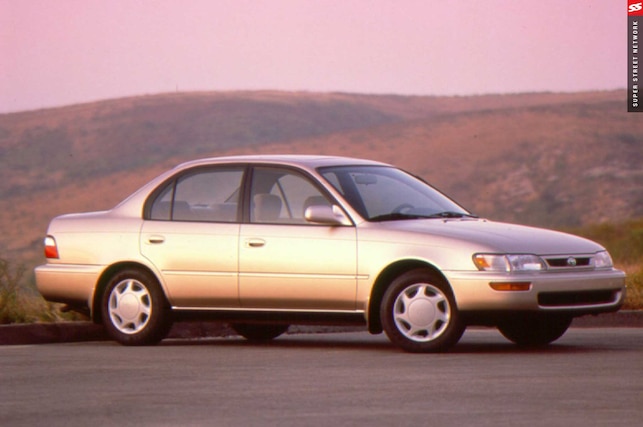 It's around this time that the Corolla began to fully transition from something you'd expect to find on the touge to something your aunt Marge would drive. The seventh-gen Corolla rounded out aesthetically and grew, so much so that it was no longer classified as a sub-compact. A fully independent suspension was standard across the spectrum now, and the 20-valve version of the 4A-GE black-top engine with an extra intake valve for each cylinder and individual throttle bodies introduced itself to Japan. Once again, the coupe was dropped from the lineup to make way for crowds beating down Toyota's doors for its all-new Paseo. By the end of this generation's reign, the Corolla had officially become the best-selling nameplate in motoring history. 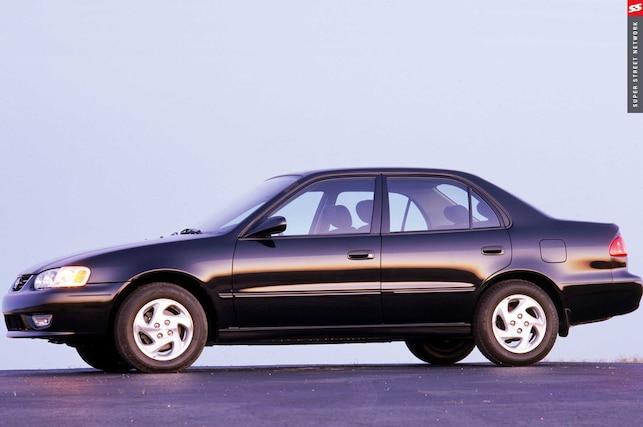 Once again, the Corolla grew, its fuel mileage improved, and aunt Marge traded up. Only one engine was offered throughout the car's five-year span: the all-aluminum 1ZZ-FE that made 120 hp and was updated in '00, featuring VVT-i and five more horsepower. 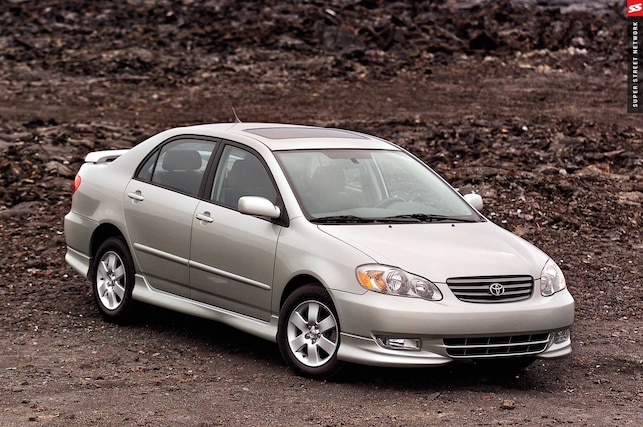 The ninth-generation Corolla was Toyota's best yet...if you liked Camrys. The bigger-longer-more powerful theme carried over yet again, and for the '05 model year the XRS trim was introduced. A lot about the XRS sounded right; it shared a similar 170hp, 2.4L 2ZZ-GE engine with the Celica, it got the Celica's six-speed manual gearbox, and it featured a lower ride height with a stiffer suspension and XRS-specific rims. It was no GT-S, but it beat the Paseo. 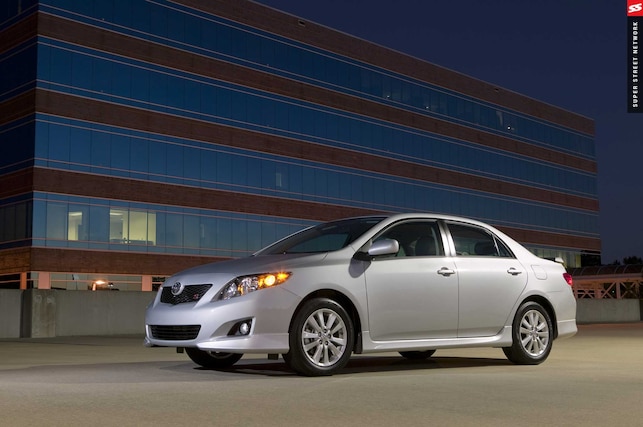 This time around, the North American Corolla is its own entity and is admittedly part Camry. Performance-wise, there isn't a whole lot to report: An XRS trim shows face again, this time with the slightly less-powerful Camry and tC's engine, and top-trim models are loaded with the sort of niceties that'd stupefy '69, like traction control, iPod hookups, Bluetooth, and steering-wheel-mounted stereo controls. It's also no AE86, but it's enough to ensure the Corolla's title as the best-selling car around. 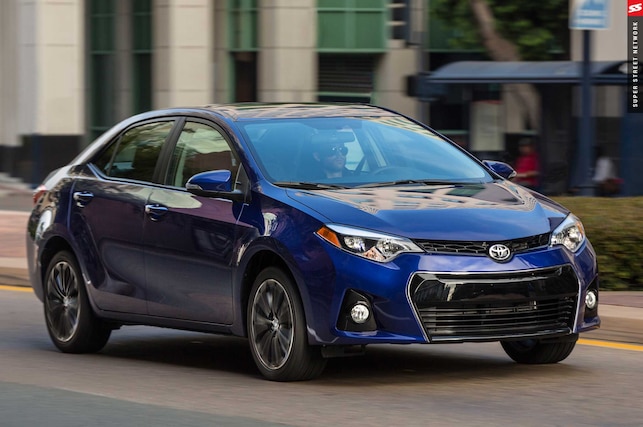 Today's Corolla is nothing at all like the puny sub-compact of '69, but 50 years generally doesn't allow for much else. It's 11 generations old now and has a CVT transmission whether you like it or not, an LE Eco trim for Earth lovers, and a rear-view camera standard so aunt Marge doesn't bungle up the rear bumper when plopping into the carport at the retirement village.

History of the Toyota Corolla
Photo /