Rolloface BMW E92 M3 - The Bark And The Bite 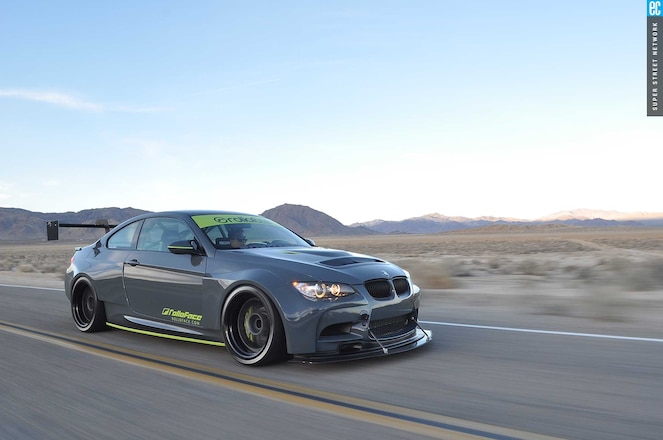 The gluey Toyo R888s spit pebbles towards the underbody and wheel wells as the car picks up speed. They ping the way bullets might ricochet off of tin siding and the increasing frequency gives the impression of being under heavy fire. From the Recaro's seat cushion you can feel the custom titanium tubing vibrate and change voice as exhaust pulses fight to get out. From purr to howl, then a shrieking crescendo, the music reaches your ears, unfiltered in the stripped interior. The faint smell of exhaust fumes trickle in through the sliced trunk lid. The sensory bombardment is almost overwhelming - and that's just first gear. 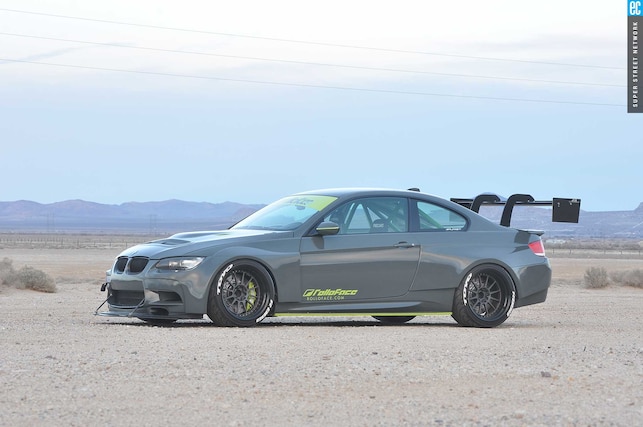 It doesn't take much to get your blood boiling in Rolloface's widebodied M3. You can waddle along at half the speed limit and still feel like you're on a flat-out qualifying lap. You feel like you're getting away with a crime or living that fantasy of driving a track car on the street, or both. Because for all intents and purposes, Rolloface's E92 M3, sporting the company's new GT-3 widebody kit, is a track car with street-legal status.

It's their R&D test mule for their big brake kits and other components, including the GT-3 body kit they recently announced. The kit includes the front bumper, an air duct that slides in between the emblem and the bulge on the hood, front fenders, rear quarter panels, rear bumper pieces (that attach to the stock bumper and blend in with the quarter panels), a trunk spoiler, and carbon side skirts. Additional parts to the car you see here are the custom carbon front splitter and an APR GT250 adjustable rear wing. 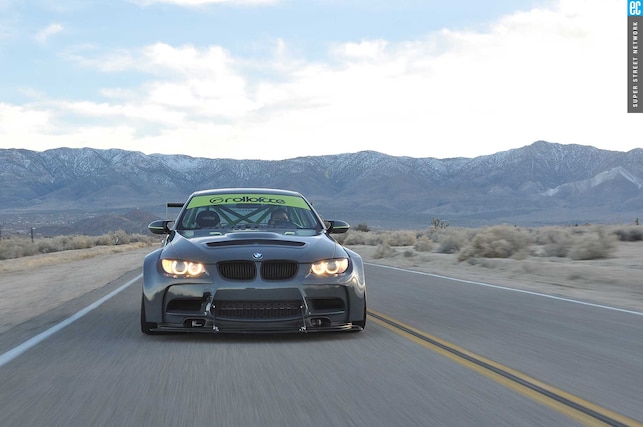 Ken Ho, Rolloface's founder (think "roll of ace" instead of "rollo face"), said the kit took three years to develop - starting with hand sketches to computer renderings and then on to clay shaping, and finally, the fiberglass production pieces. You can see some similarities to the recent Z4 GT3 racer, as both cars have wider front bumpers and use the extended area to sweep over the front wheels, while there are hints of the E30 M3s flared arches on the rear fenders. Instead of the exposed bolts seen on other widebody kits, Ho said they went after a more seamless look by molding the fenders and quarter panels to the mid-section character line that runs from the front to the rear. There's cohesiveness about the overall design, except for where the eyes stumble upon the lower sections that don't extend all the way to the rockers. Coincidentally, or not, the recent Z4 GTLM racer has flared fenders with a similar design treatment.

Widebodies naturally allow for wider tires and here Rolloface pushes the limits. Wrapped around their 19x12-inch ZR-1 forged wheels are 305/30-19 Toyo R888s, a width that until now has been practically unheard for E9X fronts. They're a tight squeeze and do require some metal bending and shaving so the tires don't get gouged, although more trimming would be needed for full-time road use as the tires still scraped when the steering was fully locked to the left. 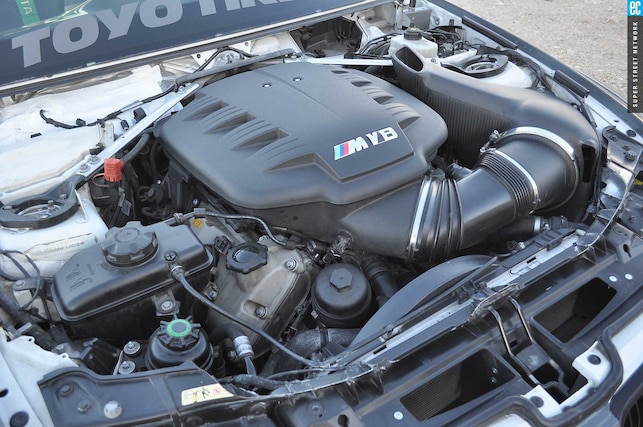 Fine tuning aside, the results are dramatic. The staggered set up on most M3s usually causes understeer as the front tires give up first, giving the impression of a nose-heavy balance. With the "square" set up, the front end stays planted throughout the turn and trying to get them to lose traction on a public road borders on reckless behavior. The car turns in with millisecond response without any body roll. Instead of the understeer you'd normally experience, Rolloface's M3 feels closer to neutral. You can still feel the weight of the V8; it just plays less of a role in the handling behavior.

Downforce also has a lot to do with the car's planted feel. Stability through fast, sweeping turns is exceptional and credit also goes to the custom coilover underpinnings. But coming out of turns and onto the throttle, it feels as though the engine is battling with the extra downforce. It's the classic conundrum of cornering vs. straight-line speed.

By stripping out the interior, Rolloface managed to remove around 400 pounds from the stock 3649 lbs. to achieve 3219 lbs. The most striking weight-shaving component has to be the carbon fiber dash which was custom made by Gruppe-M from Japan. All business, it has cut outs for the light switches, start button, and hazard/door lock cluster and nothing else.

The weight savings transforms the car, making it react faster to steering and braking input. You can flick it through a series of tight switchbacks and it will never feel out of shape. It just feels hungry for the next turn. Un-insulated, there's a better connection to the road and more information gets to the seat of your pants and hands. 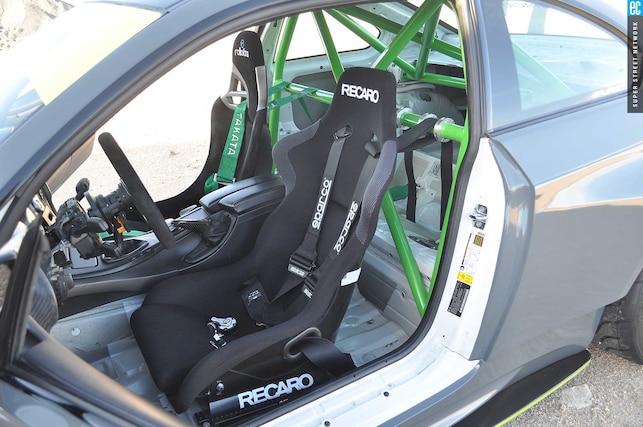 It just takes a light brush of the brake pedal to set up for turns. Rolloface's SR-C series brakes grab instantly and you can hear the friction of the Pagid RS pads clamping onto the big 380mm slotted, floating rotors. The front calipers are forged aluminum 8-piston units and the rear calipers are 6-piston pieces. Their SR-C line of braking components, which are made in the US, are the result of three years of R&D. Ken Ho says that in addition to BMWs, they also specialize in creating custom brake set ups for Audis, Mercedes, and VWs. 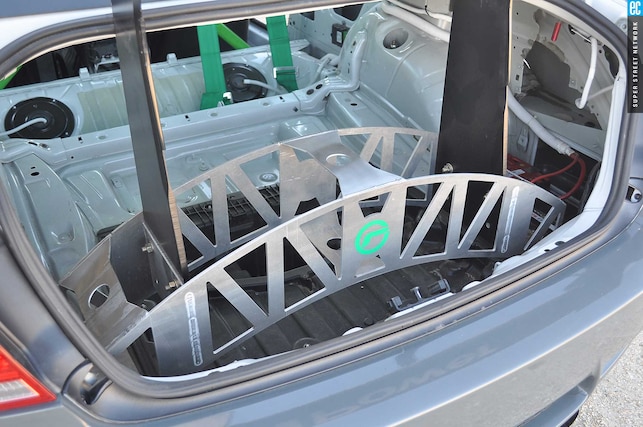 To squeeze more power out of the M3's V8, Rolloface actually kept the ECU stock but enhanced both the intake system and exhaust with a carbon air intake from Gruppe M and the aforementioned custom, titanium exhaust. On the track they run without cats and estimate power at 450hp. It feels lively enough at low revs around town, due mostly to the decreased weight, and much like other S65 engines, it does its best work in the second half of the rev range, with an astonishing ability to pour on the power with every extra RPM. The classic V8 rumble of the stock car gives way to a high-strung race tone you'd normally hear on the track instead of the street. They're the kind of notes that burn rather than tickle your eardrums. Raw and elemental, the single-minded focus of Rolloface's M3. 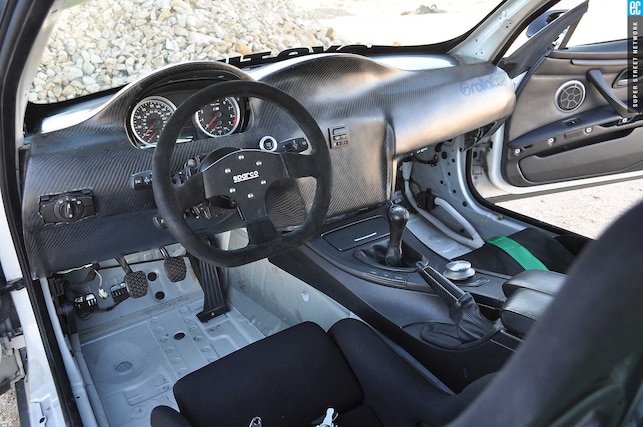 Rolloface came a little late to the widebody E92 game but it's distinctive enough that you won't confuse it for one of its competitors. What separates their example is the single-minded focus of getting the car down to its elemental state by eliminating dead weight, which makes it feel like a completely different machine. Credit the company, too, for taking the time to R&D their components instead of rushing to market. And, in this case, it scores big credibility points for its track-centric focus. We love that it straddles the line between track and street - a test mule that can take center stage at a SEMA booth. With so much of the widebody craze being about cosmetics, it's refreshing to see substance triumph over style every once in awhile. 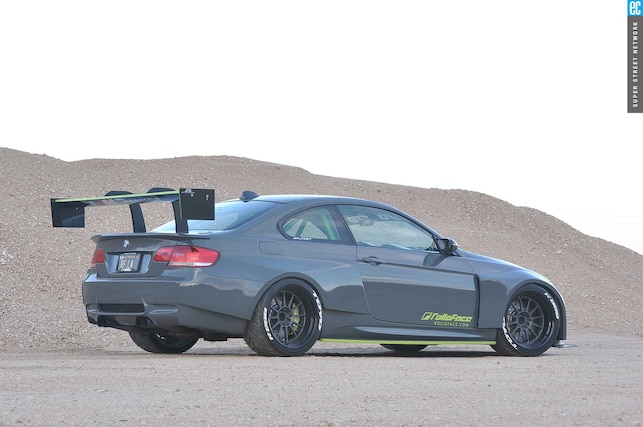 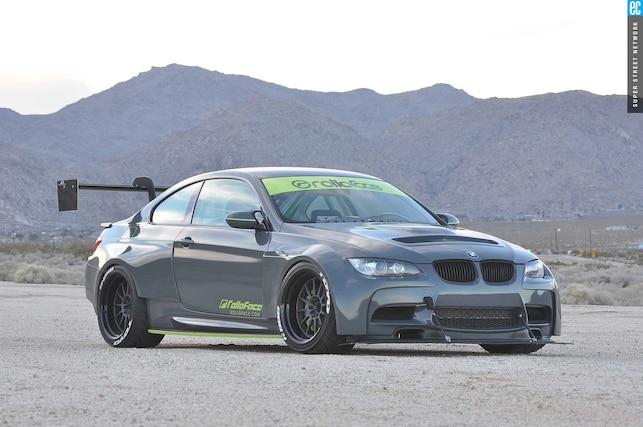