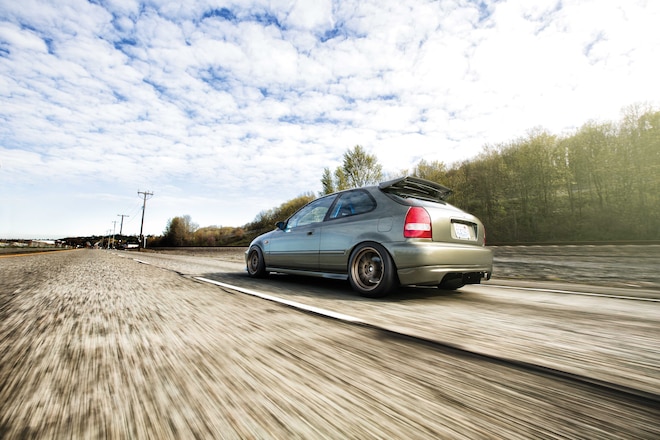 Huy Hoang is a bit of a whore when it comes to customizing cars—Hondas in particular. He's owned several vehicles over the years, not including the three projects he has currently. You may be familiar with his turbocharged, Mugen-themed Acura RSX, which graced our cover less than a year ago (Vol. 19, No. 11). In his stable is yet another Mugen-outfitted DC5, as well as this supercharged K20A-powered Civic. 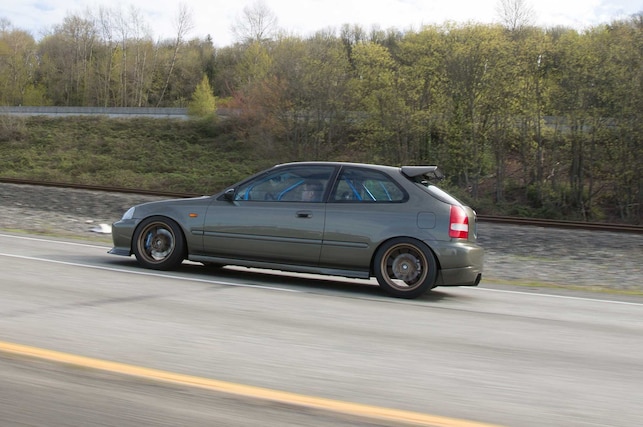 Huy is a product of hard work and dedication. He doesn't squander his hard-earned money on fancy clothes or partying on the weekends. He knows how to spend wisely on what he loves; he just happens to really, really love Hondas. We believed that he might be spreading himself thin by having so many projects at once, but he promises that he loves all of his builds just the same. They all just happen to serve a different purpose. The red DC5, nicknamed "REDRUM1," is his masterpiece. The other DC5 serves more as a daily cruiser, and this Civic came together during the years of downtime while REDRUM1 was being assembled. It just so happens it became a masterpiece of its own. 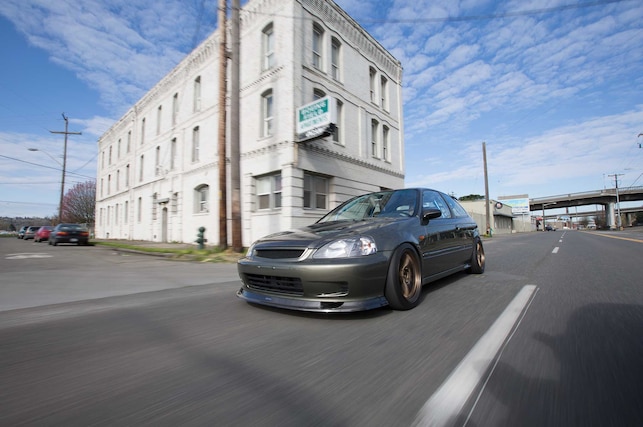 "This Civic used to belong to my friend Joe Pax," Huy explains. "I've known Joe for a number of years now, along with my other close buddy Bill Master. We were all building Hondas together and he was our personal [engine] tuner. When he owned this Civic, he just had a single-cam D-series engine in it that pushed 91 whp. He took it to the track a couple of times but it was just a clean, simple build. The only thing that really stood out was the custom green paint, which I have kept still."

When Joe needed to sell the Civic, Huy was the first to leap at the opportunity. It was nice to keep the car within the same group of friends because it retained a sense of sentimental value, however, Huy had much bigger plans than what Joe had originally set out to do. 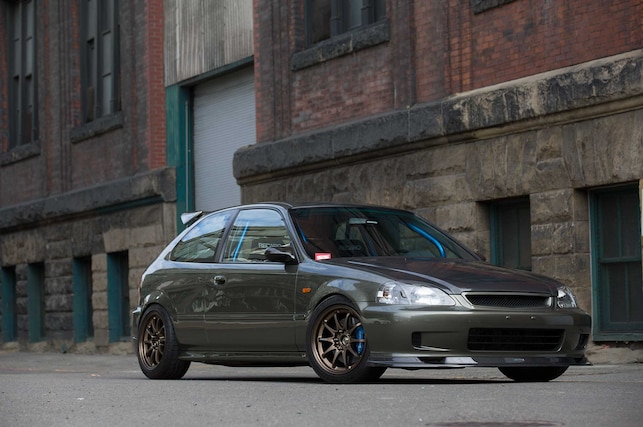 The teardown of the hatchback started out swift, but things slowed down when Huy decided to ditch the single cam for a newer, more powerful 2.0L K20A from a Type R. Had he done the swap in '16, things would have gone much smoother, as the availability of K-swap parts is endless. Seven years ago was a much different story. A couple of the major issues Huy faced involved the wiring and mounts. Nowadays, you can jump online and purchase any number of pre-made engine swap harnesses and engine mount kits, however, back in the day, without as much swap support, enthusiasts took matters into their own hands, much like what Huy and his friends did. The custom pieces may not have been as clean as what you can buy now, but they worked.

Other problems arose as well that weren't related to just parts. Huy resides in the Pacific Northwest, an area known for being wet much of the calendar year. "At one point, I had a fish pond in the passenger-side cabin because the rain had seeped in through cracks that had formed while the car sat outside," he remembers. "I ended up having to strip the car down and had the entire thing repainted the same shade of green."

Huy credits his good friend Bill Master with being an essential piece of the puzzle and getting this Civic to its current state. The two spent countless hours on the car over the years, including multiple extractions and re-installations of the K-series. "Modifying cars wasn't just a hobby for us; it became an obsession to continuously learn and gain knowledge. The interactions with friends and other enthusiasts became more important than building the car itself. Through those relationships, I came to realize why I built this Civic as well as all of my other cars. It helps bring people together, and there's no comparable excitement than the fun of accomplishing something great together," Huy says. 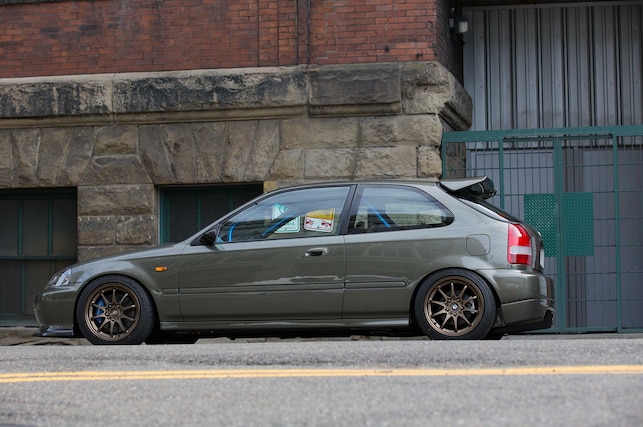 This Civic has gone through many transformations, but the current version is the best yet. As mentioned, under the hood (Spoon Sports carbon hood to be exact) is a K20A, but Huy modernized his setup with the latest catalog of K-swap-specific products from Hybrid Racing. Replacing the factory intake manifold is a roots-type supercharger from Jackson Racing. With Hondata K-Pro, his force-induction K20A now makes 325 ponies to the front wheels. Also noteworthy is his exhaust setup, which is a mash-up of classic and new age components: Up front is an R-Crew header designed specifically for K-swapped vehicles, while at the opposite end is a traditional Mugen Twin-Loop muffler. 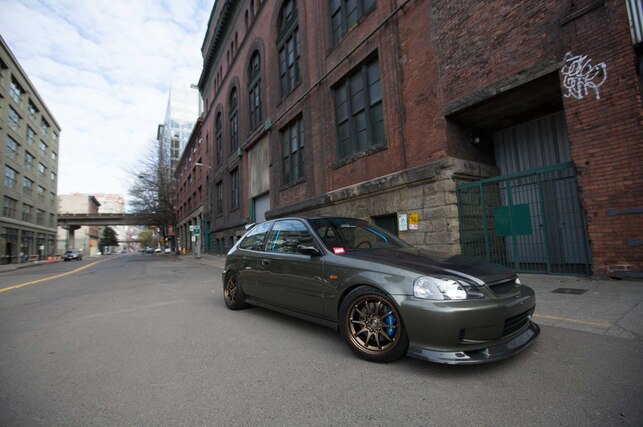 The interior of the Civic is now free of water damage. You'll find a set of Recaro buckets surrounded by interior components from a Japanese EK9 Civic Type R. Huy has a stash of Mugen steering wheels that he switches in and out of the car depending on his mood, while the instrument display has been updated to a digital S2000 cluster. Visually, the exterior of the Civic still looks very much the same as it did when his friend Joe owned it. Huy added some new styling cues by installing a carbon-fiber First Molding front lip, Sergeant rear diffuser, and Seeker rear wing. Seated with the Buddy Club dampers are Volk Racing CE28N wheels, which were aggressive enough to require Huy to massage the fenders in order to accommodate the 225-series Falken tires all around. 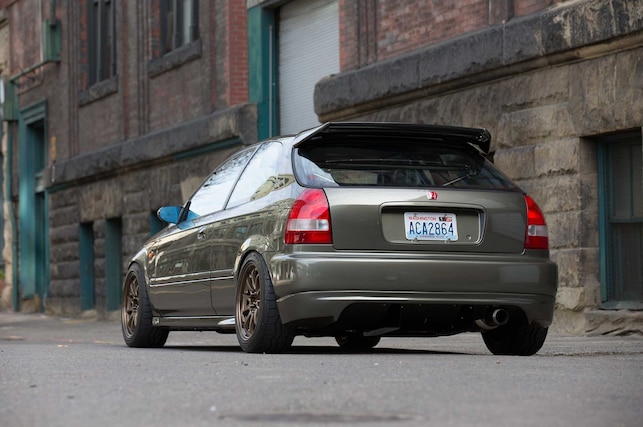 Huy concludes, "I have owned many Hondas in my lifetime and it may seem like I just can't settle down with one, but honestly, I find it very gratifying just to go through the process of any car build. There is so much that goes with it, more than just installing parts. I've learned to be more patient and work through my problems one step at a time. Having great people on this journey has also been helpful during the rough patches because everything just seems to fall in place with their support." 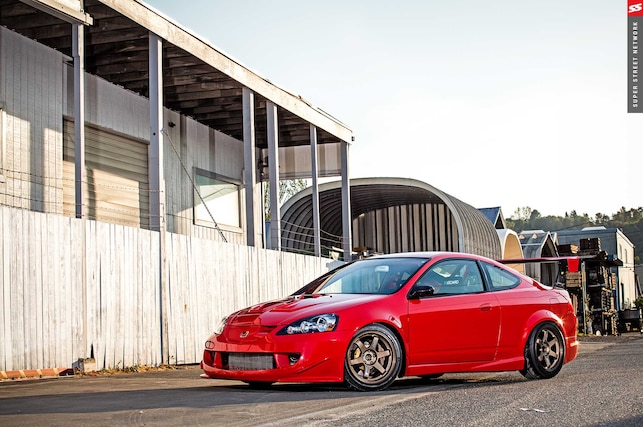 Featured on the cover of Vol. 19, No. 11, Huy's most extravagant build was this '03 Acura RSX Type-S, which made nearly 400 whp and had a Mugen aero, custom widebody, full rollcage, and much more. 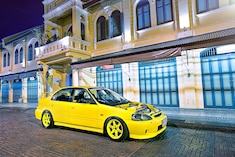 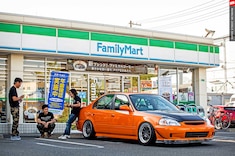 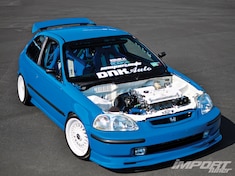