A fully built ITR from the most unlikely place. 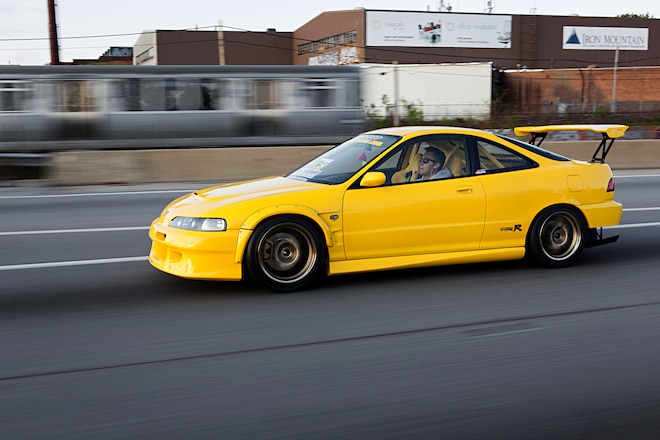 There are guys who rely heavily on what the Internet dictates that they do, and there are guys like Chen Huang. Chen comes from an area where you wouldn't expect to find a nice project car. He is one of the few guys who actually made the effort to travel all over the country to experience car culture for himself before he decided what to do with his build. If you're on the Interwebs and have seen his '00 Acura Integra Type R at various shows, you'd probably think he was from California, Texas, or any of the other, more tuner-friendly states. But this finely executed, fully built Integra Type R hails from a place known more for its cornfields and green pastures, rather than top-notch builds—Des Moines, Iowa. 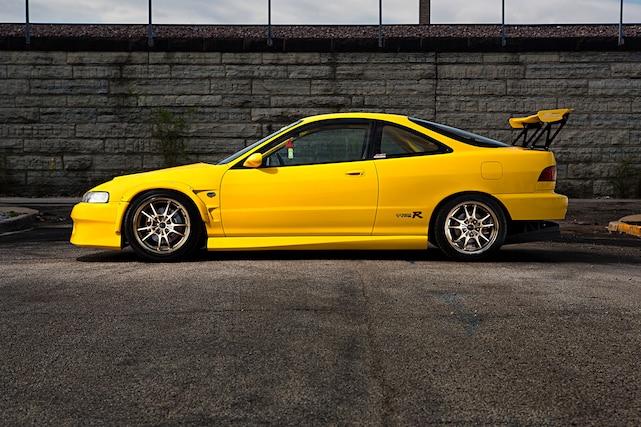 Before we begin to tell Chen's story, allow us to give you some context so you better understand his mind-set and why he built his Type R to such extremes. See, Chen is the self-made owner of one of Iowa's most successful car dealerships. In his occupation, he has access to quite a few different cars. Because of that, he's owned a Civic, S2000, five to six Integras (our guess is that he lost count) and, get ready for this one—10 Integra Type Rs. No, you read that correctly—10! Many dream of owning one ITR their entire lifetime and this guy has been through 10 of them.

"I was happy with this [Type R] when I first bought it," Chen recalls. "It was just a bone-stock Type R at the time with roughly 65,000 miles. The body itself was really clean. It had A/C, power steering, and was just a fun car to have. I owned so many of them in the past but was always looking for a cleaner, better chassis, and this was near perfect." 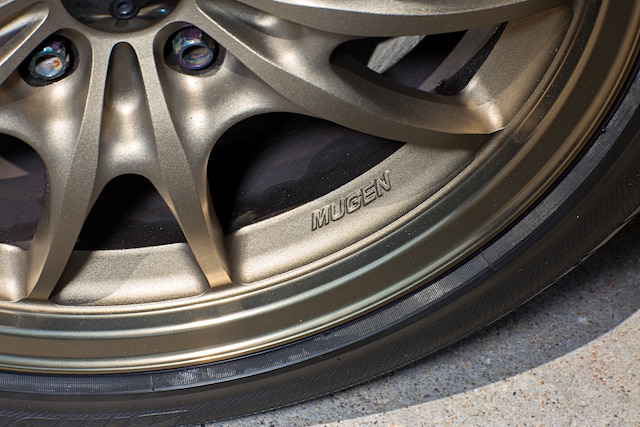 Chen caught the tuning bug, like many others, and started modding. He didn't do anything special at first, just what he felt were the basics that anyone else would do. He opted to go for a more UKDM look, so he converted his Integra to resemble its European "Type Rx" counterpart. He liked that it was a little different than the typical "JDM-esque" look, but quickly grew bored of it. As he explains, "I realized how many Type R owners had this exact setup, so I scrapped the idea and went back to the drawing board. I tore the car apart and started collecting parts. When more parts came, the more I began to envision what I wanted."

The first major piece to come out of his ITR was the B18C5 engine. With the chassis devoid of a heart, his friends at Brother's Garage Auto Service were then able to strip the engine bay down and remove the front end. Chen marked down some specific areas within the bay that he wanted smoothed out, but he didn't want to do too much and make the area unrecognizable. The factory face was eliminated to make room for a Japanese Type R front end. He specifically chose to have that front retrofitted so he could run the Mugen aero he had acquired. The kit, which consisted of the front bumper, side skirts, and Gen. 2 rear spoiler, weren't easy to get. Honda enthusiasts understand just how difficult it is to get a complete kit, which also includes the vented hood that Chen was able to source some time later. His goal was to debut his ITR at the '13 Import Alliance (IA) Summer Meet in Kentucky. The car came back into his possession from the body shop just days before the event. Chen worked on it day and night until 5 a.m. the morning of IA. 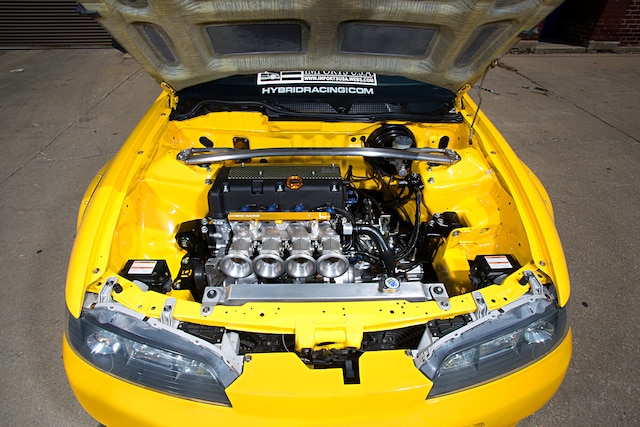 "I went inside the house, took a shower, packed, and then hopped into my car to start the 10+ hour drive to Kentucky. I remember the tachometer and water temp gauges weren't even working, but I was able to get the car to and from the event safely. I don't think I'll ever make that drive again without A/C, but the pure joy of being in my car for the trip made it all worth it," he says. "I will always remember that weekend because it was my first time going to a huge meet outside of Iowa. It was also the first time showing the car to people all over the country, and my first time getting sunburnt." 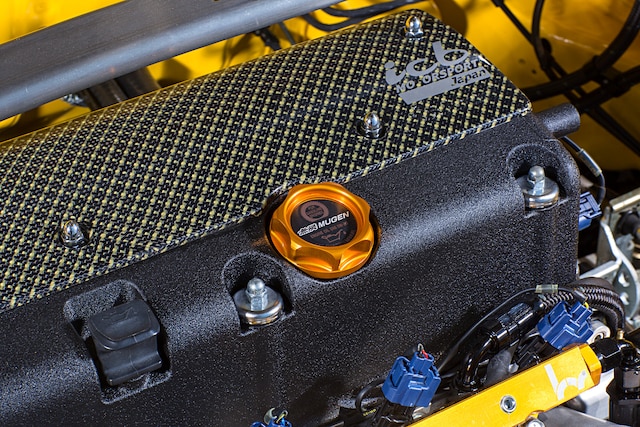 The joy and bliss that he felt didn't last, however. He came home with the realization that he had once again built a car that he saw as generic. It was fun, but just another car that anyone could build because it was based off of the ideas of others. Unsatisfied, he tore his ITR apart once again. This time, he went even further by stripping it of all of its bolts and moldings. Every possible part that could be replaced with new, OEM components, was. The dated suspension parts that couldn't be upgraded were sent off to a powdercoater for a new coat of black.

Chen looked everywhere for new parts. His search eventually landed him at what would be the centerpiece to his ITR's makeover—a rare, staggered set of NSX-specific Mugen MF10 wheels. The 17x9-inch front wheels are the widest that Mugen had ever offered. The rears, a 16x8-inch set, are a Mugen aficionado's dream. The faces have just the slightest hint of concavity that sets them apart from any other MF10. Fitting the 9-inch-wide fronts is where Chen's build swings in a whole new direction. Instead of massaging the body and adding insane amounts of camber, Chen went with aftermarket, wider J's Racing front fenders. To add even more space to accommodate the wheels and 255-wide Bridgestone tires, he also stacked a pair of J's Racing fender flares on top of the already-widened FRP fenders. What's funny is that those same Mugen-lovers in awe of the NSX MF10 wheels would probably cringe at the thought of Chen cutting his pristine Mugen bumper to fit the J's flares. 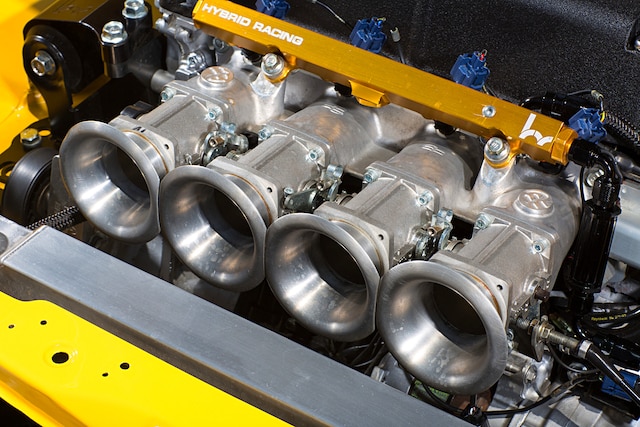 "This particular setup with these wheels had never been done before on a DC2 chassis, so I really wanted to be the first one to attempt it. I also did it because I wanted to run my Weld drag wheels and race slicks. People may think that this is just a show car, but I actually do drive it a lot. I even go to the illegal drag races from time to time," Chen says with a laugh.

As the ITR neared completion, a night of drinking and relaxation helped Chen discover the final piece to his build when his friend Sam Tsoi found an interesting used car for sale. Inside this Honda was a built, stroked, 2.3L K20A motor assembled by ERL Performance. After contacting the owner, the duo drove to Kansas City the following day to purchase the car. The ERL-built motor went in as quickly as his old K20A2 was removed and sold. 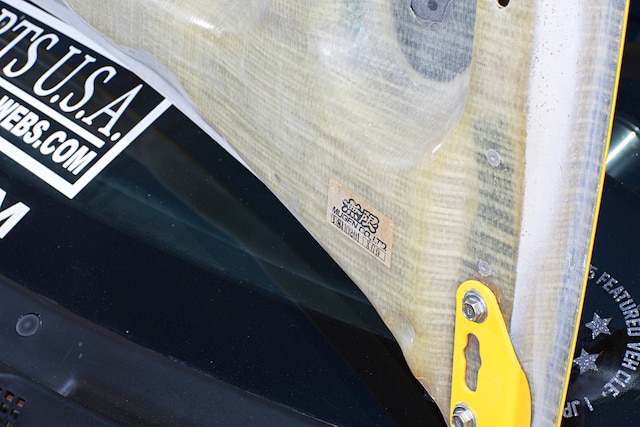 "The Honda scene as a whole is pretty lacking here in Iowa," Chen says. "I set out to build something different, but I don't even think people in my area truly appreciate it. There were a few guys with some pretty nice Hondas out here but not nearly as many as you would see in the more popular regions like the West Coast. I started attending events out in California as well as other states like Texas to get a better understanding of what was out there, and I think it really opened my eyes to things. I'd like to believe that it also helped my friends to see what the rest of the country had to offer, and now they're building their own cars, inspired and in hopes of making it out to a major car show like Wekfest in the future. My Integra wasn't the first build to come out of Iowa and it certainly won't be the last. I think I just wanted to build something that I enjoyed and was a little different than the rest of the typical Honda builds out there. It just so happens that this ITR was built on a cornfield and runs on corn fuel." 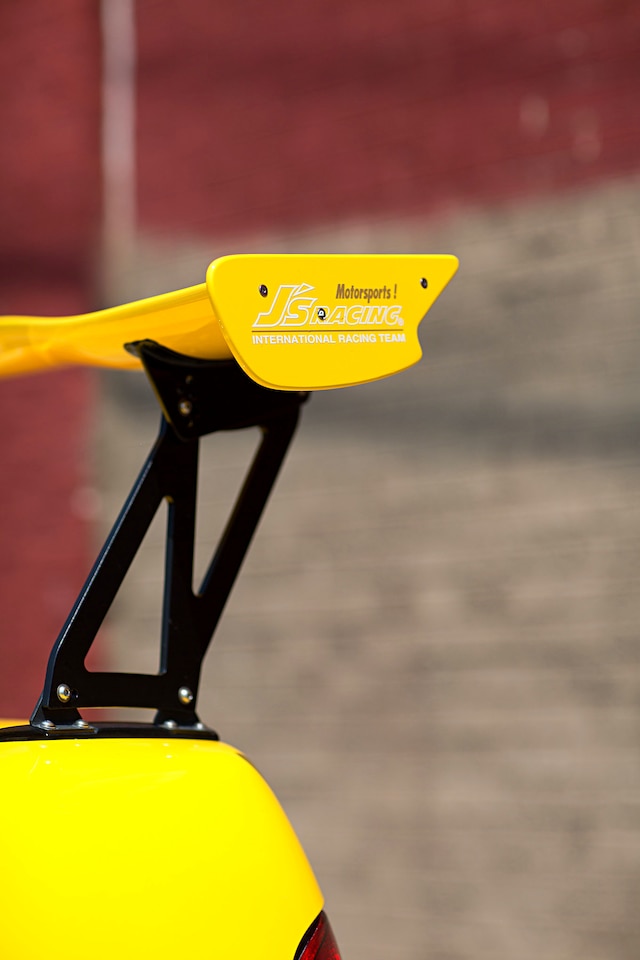 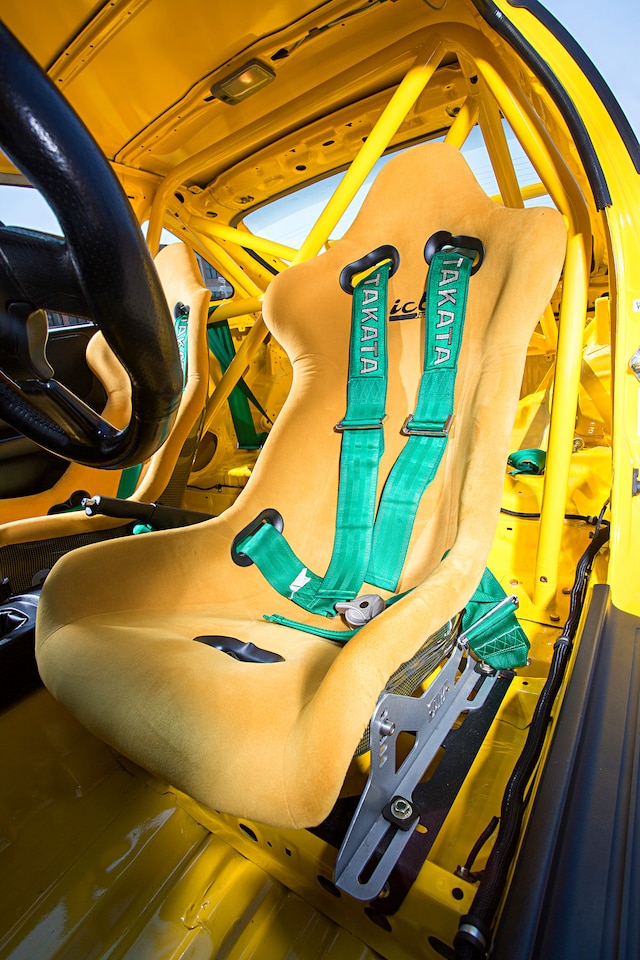 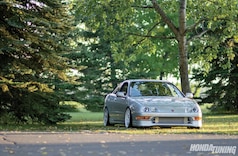 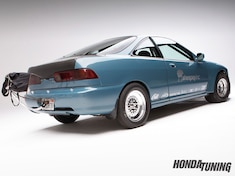 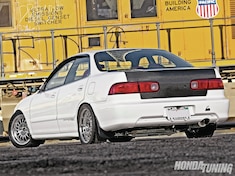 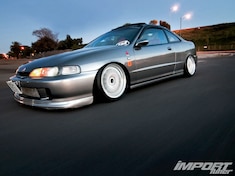 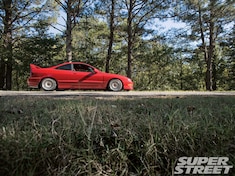