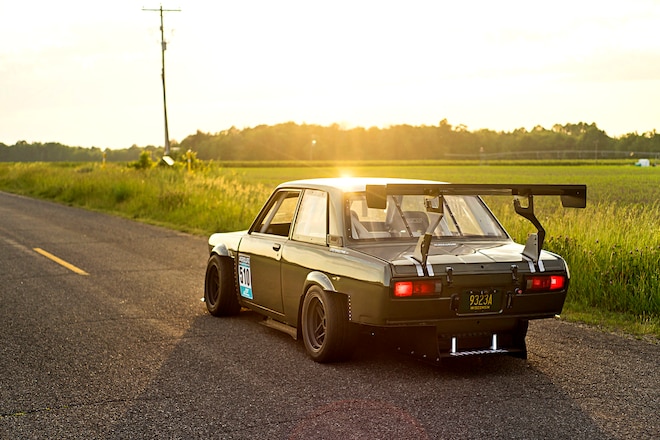 What exactly do you do when the skinny-jean-wearing, fixie-bike-riding, '80s-sunglass-sporting hipsters have taken over your local drift scene? You say sayonara to that emo life and build an Ecotec-swapped Datsun 510 for the road course. 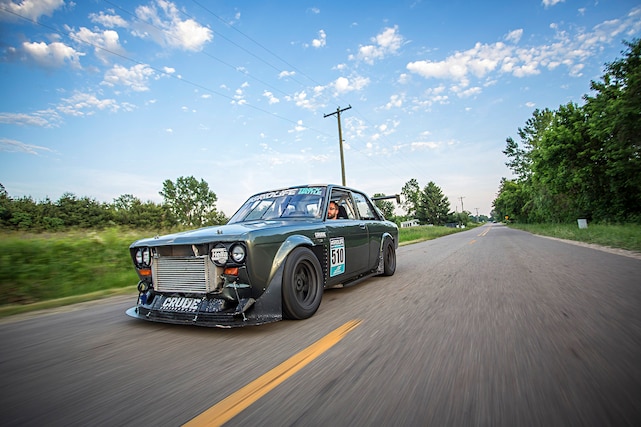 Or at least you do that if you're as fed up as Jordan Connor was and have the sort of skills to assemble a track-capable, '70s-era Datsun that's good enough to dust the millennial in the Corolla and scoot his own two kids back and forth to school in. 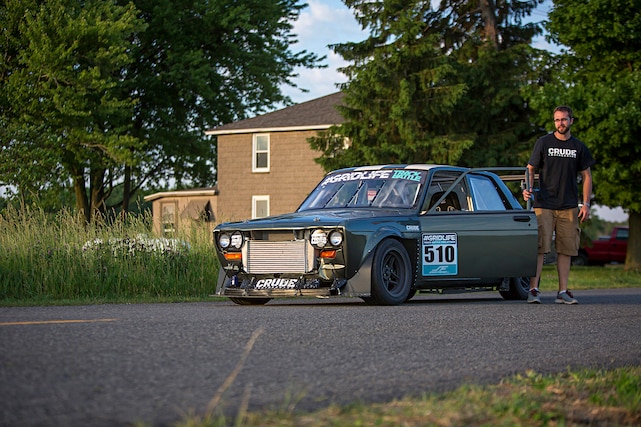 But you're wondering what in the world one of GM's four-cylinder turbo mills is doing underneath the hood of a 44-year-old Datsun. "I'm not a numbers-matching guy," Connor will tell you about the unlikely swap that's taken the place of the eight-cylinder LS1 and turbocharged, single-cam Nissan engines that he'd previously dropped in. "I like to build my cars the way I want to." Which is exactly what led to the first-generation Ecotec, an impressive, 170-plus-horsepower engine (in stock form) with variable valve timing and a massive 88mm bore of which can be sourced from all sorts of non-impressive vehicles, like the Chevy HHR and Saturn Aura. 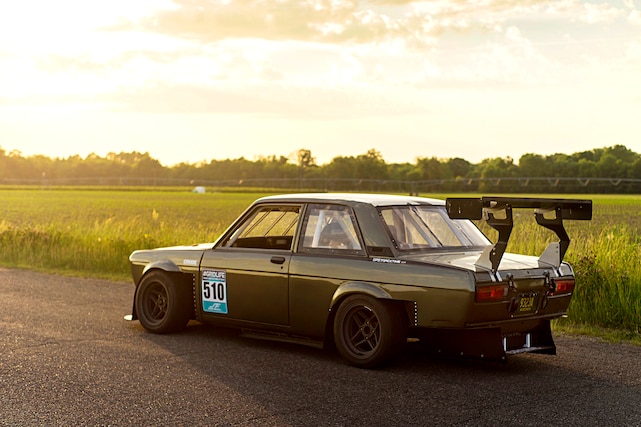 That GM's Ecotec shares ties with GM's corny, dad-styled station wagon and a brand that's since disappeared is of little consequence to Connor. "I researched Ecotec engines and [found out] that a lot of sandrails and off-road trucks were using [them] for racing and that they proved to be very reliable," he says. "You can also pick them up for $400 with 25,000 miles [on them] and they'll take 350 whp all day long." 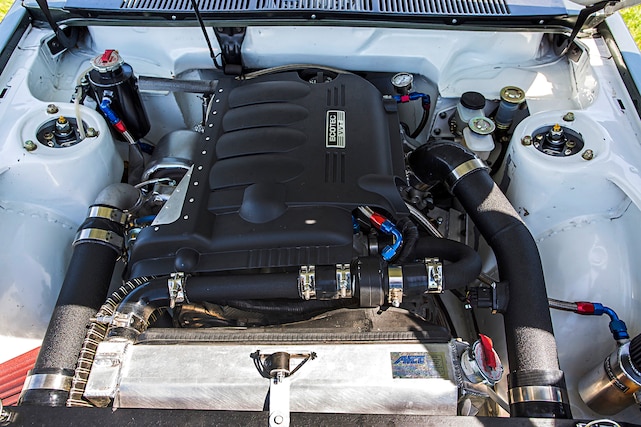 Those are the sort of things that fall in line with Connor's car-building criteria. "The four components I keep in mind when building a car," he says, "are cost, performance, reliability, and availability." There's evidence in all of those by way of the factory Jeep engine mounts he's modified to fit, the Subaru STI rear differential he's fabricated into place, and the onboard computer he nabbed from a Chevy Monte Carlo of all places. According to Connor, "They're all cheap, reliable, and available parts."

For Connor, settling on the compact, pre-Nissan sedan that's got its own cult-like following after building an S14 was easy. "I've always loved the boxy look of the 510 and the underdog story that it brings," he says. "Using very little, it can really duke it out with the big boys." The Garrett turbo Connor's fit into place within the Ecotec engine's original housing helps, but the changes he's made underneath are what you'll notice most. Like the Ground Control coilovers that are made up of modified struts from a 280ZX up front and Koni shocks in the rear. Hubs from a later-model 300ZX were also made to fit up front to work with rotors from the same chassis that've been updated with Wilwood calipers at both ends. A series of alignment plates, roll center adjusters, anti-sway bars, and tension rods—all of them adjustable—can also be found underneath along with spherical bearings that do away with every four-decade-old bushing the Datsun originally had. 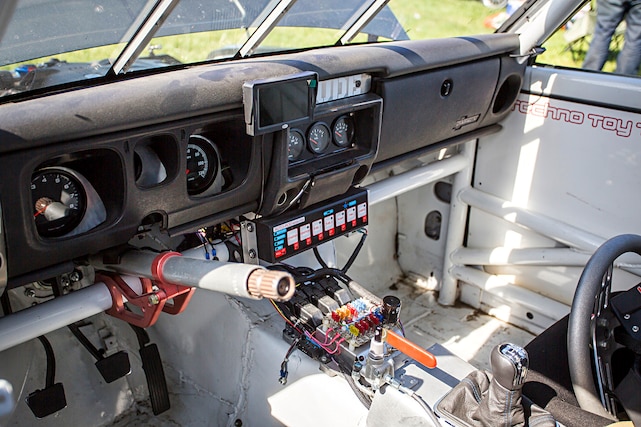 The sort of ingenuity Connor expressed while putting together the 510 is what ultimately led to his side business, Crude Engineering, where the husband, dad of two, and full-time product support leader working in the outdoor power equipment industry spends what little free time he's got preparing like-minded grassroots racers' cars for the track. "I only work on vehicles that see the track," he says. "It's a personal preference," and is one that embodies the kind of work he specializes in, like suspension setup, corner-balancing, alignments, and cooling and brake systems design. "The whole idea," Connor says, "is to get out of the garage and onto the track." 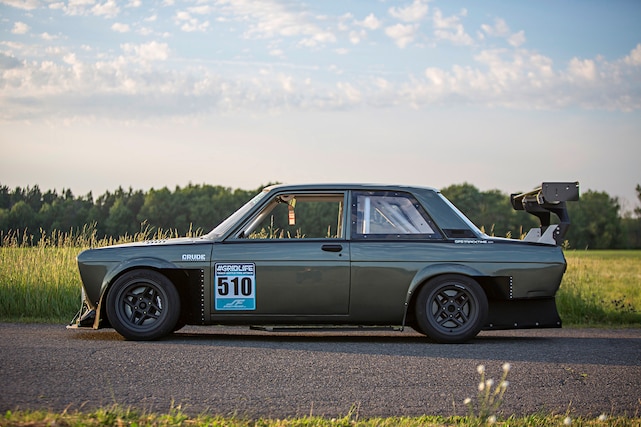 Despite Connor's resources and knowledge base, building the 510 wasn't without its challenges and, if you ask him, he'll simply tell you that "there were many." Which isn't a surprise when you consider the mix of parts that include a gearbox from a Pontiac and the Tequila Patron Ferrari 458 GTD wing that's been mounted out back. "My build is very different than [how] any of the vintage guys would build a road race car, so many of the components are my own design," he says. "I've been tweaking the car for the past four years on [the] track and it's really starting to take shape as far as lap times go." But it takes time when you think outside the box that 510 purists do. For Connor, making the car right means altering the sedan's roll center, suspension pickup points, and drivetrain angles from what Datsun's engineers thought they should be as well as hacking the rear subframe and raising the differential up higher than it ought to be for a better axle angle. "Basically," he says, "everything with the suspension's been tested, modified, tested [again], and then modified [again] to get it to the point that it's at now." 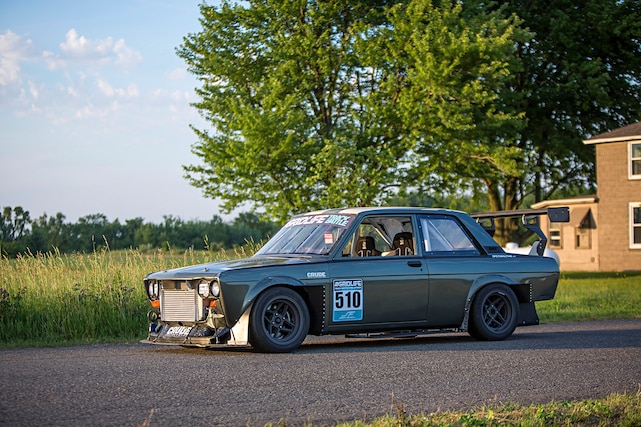 Despite the hipsters with their beards and their feelings, Connor still holds his drifting days dear, reminding him of a time when responsibilities were few and long nights wrenching with friends were many. "After the '09 [drifting] season, my wife and I decided that we were going to have kids, and that changed my outlook on life and cars," he says about the decision that led to the 240SX being sold and the 510 buildup commencing. "I'd always wanted to build a Datsun 510," Connor says. And besides, "you can't help put a smile on your face when you see a car like this." 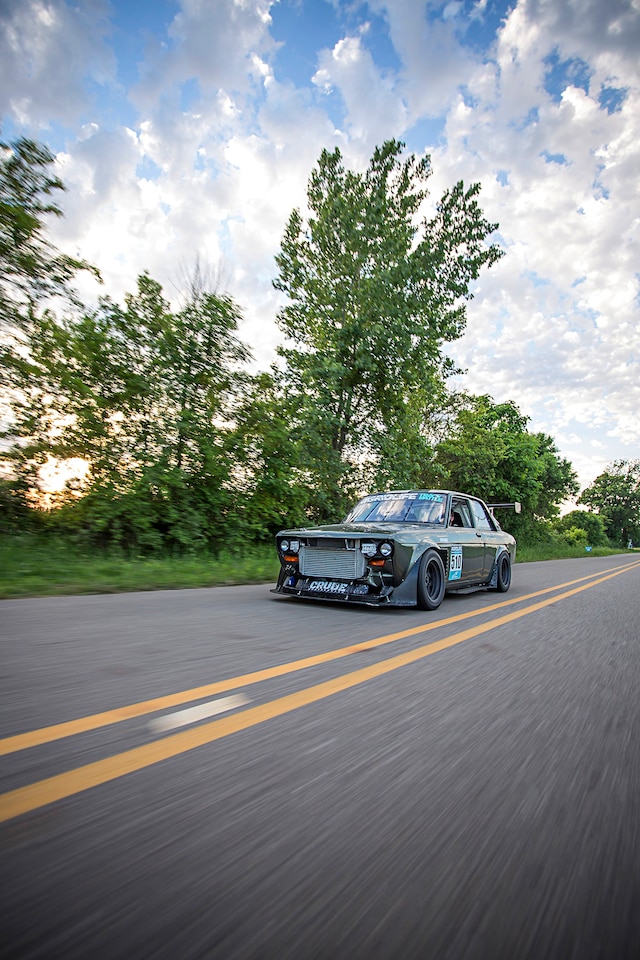