The straightest line between your action movie fantasy and glorious reality 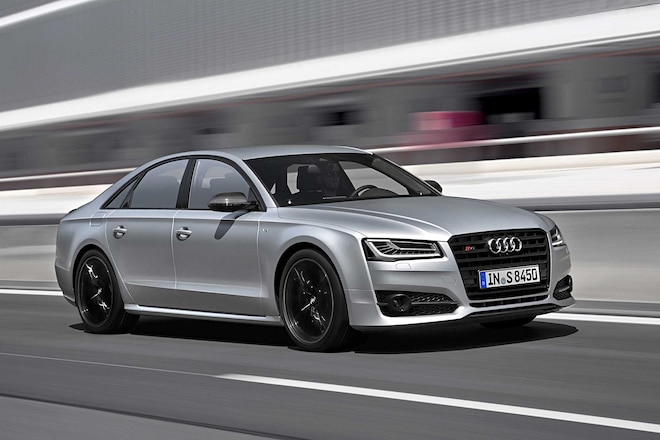 A kind of clarity is required to translate impressions of the 2016 Audi S8 Plus to you, the reader—not detachment, necessarily, but a calm. This is a difficult state to attain when the first thing that flashes into your head on sight of the S8 Plus—and this will be the first thing that flashes into your head—is all the coolest images and sounds from the Transporter movies and/or the classic car chase from Ronin. It's a big, hyper-powered rolling tank of a German sedan; the thought is enough to make a certain kind of driver giddy. 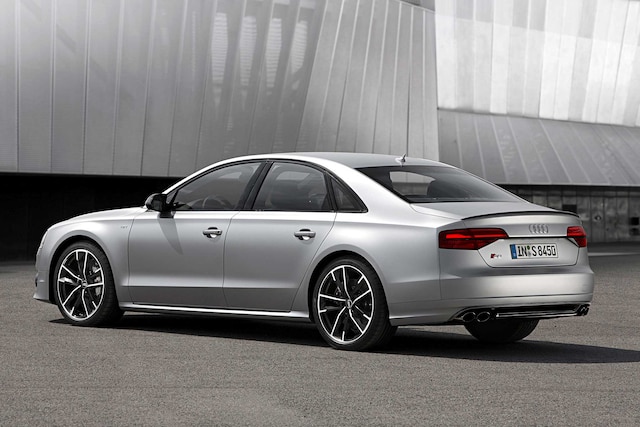 With an as-tested price just over $152,000, the S8 Plus is for a very certain kind of driver, indeed, though it's hard to say you don't get your money's worth. The 2016 S8 Plus packs the same 4.0L TFSI V-8 as the blistering RS7, albeit with a different tune to make it a bit more "civilized," befitting the top-of-the-line Audi sedan. Civilization still counts for 605 hp and 553 lb-ft of torque when the S8 Plus is in overboost. Combined with ZF's eight-speed Tiptronic automatic transmission, Audi claims 0-60 mph at 3.7 seconds, but it feels even faster. The 4.0L is glorious; you feel an instant swell of torque as you give it gas, the intensity building all the way to redline. The Tiptronic is excellent, never leaving you wanting for a different gear, channeling all of the S8 Plus' massive power as directed.

On the road, the speed of the S8 Plus is titanic. You can approach triple-digit speed literally before you know it; thanks to the bank-vault-like quality of its interior with the windows up, the sensation of speed is easily lost. On some occasions I drove it with the window cracked, letting the wind act as a guide so I didn't accidentally get carried away. When you do need to stop, the optional ceramic brakes (part of the $11,000 Dynamic package installed on this test vehicle) do their job superbly. The ceramics are very grabby around town, but all is forgiven as you tackle the S8 Plus' learning curve on back roads; once out and exploring, the fact that the ceramic brakes are more "coming out of hyperspace" than "slowing to a gentle stop" becomes a great and welcome strength. 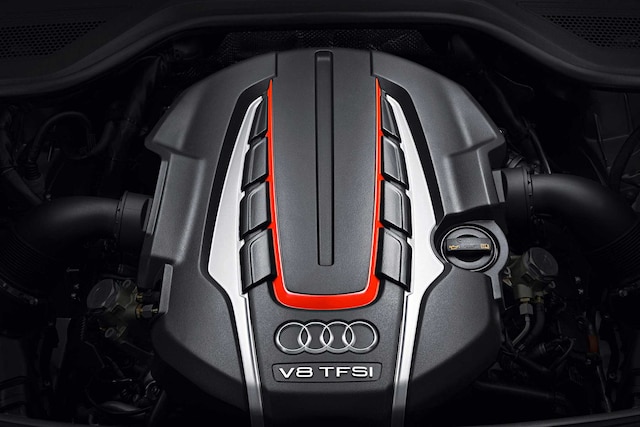 The 2016 Audi S8 Plus features a five-link front and trapezoidal-link rear adaptive air suspension, both with specific tuning tweaks for this model. The car's 4,685-pound curb weight and awesome power make it a challenge, but the car comes off as self-aware—it's a heavyweight that isn't trying to move like a flyweight. What will knock you out, of all things, is the mileage: for all of the over-the-top horsepower and torque, one 200-mile round trip we took saw the S8 Plus return 26.2 mpg. One more time, for emphasis: 605 hp, 553 lb-ft, 26.2 mpg over a 200-mile road trip. Amazing. 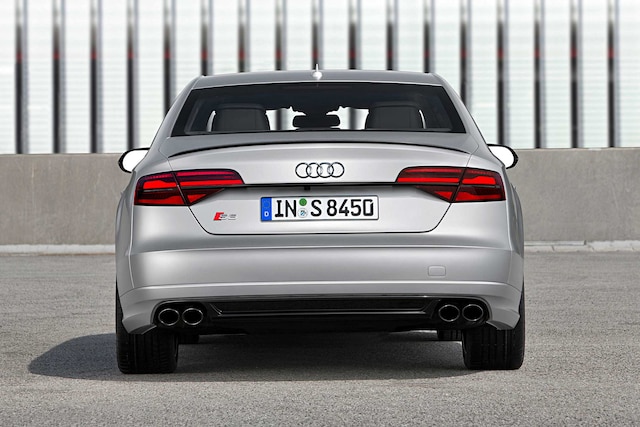 As if it needed to be, the S8 Plus is gorgeous inside and out. Our test car came with the Black Optic package (carbon-fiber and high-gloss black trim pieces—$5,500), Audi's Design Selection package (full leather black interior with Arras Red stitching, red carbon twill upper relays, Piano Black shift lever—$5,500), and was finished in Florett Silver ($6,000). The seats are ultra luxurious—like sliding into a Bentley seat. Their massage feature is pretty good also, though this author prefers a firmer touch than most car seat massage programs provide (off-topic: Lincoln, of all manufacturers, offers a good one). Our only aesthetic complaint was found with the black plastic surrounding the center console; for $110-150,000, it should either be something else or look and feel a lot like something else. Other than that, there are few nits to be picked. Even Audi's MMI system was intuitive and useful, save for a glitch or two, including one fairly loud trip in which it wouldn't let me adjust the volume.

The bottom line is that the 2016 S8 Plus is everything it should be, and if Audi sold it with a set of good hair clippers and a tailored black suit as a Jason Statham cosplay package, you would still have to admit how good it is at being exactly what you expect. You can even, with a flick of a few switches, completely enshroud the rear cabin, leading more than a few friends to ask if they could simply ride along in the back. The brilliance of the S8 Plus is that you can't fault it for its excesses—they're integral to the experience. If you want a cut-rate hypersedan, buy a Charger Hellcat; the S8 Plus is a hero car come to life, and it delivers on every level. 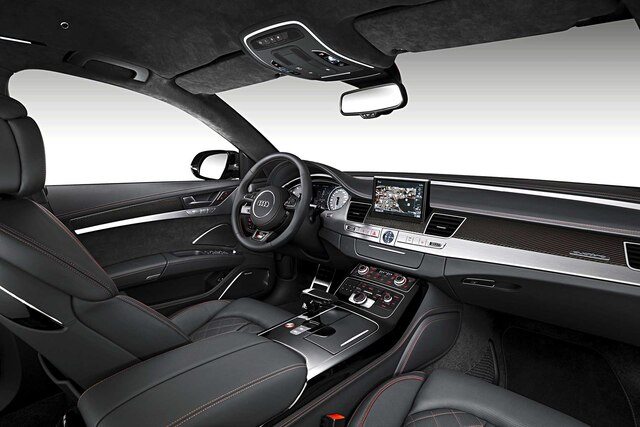 I haven't driven the S8 Plus back to back with the Mercedes S-Class and the BMW 7-series on the same roads, same day, so I can't tell you which one is the best car. I have driven all three cars but at separate times. All three are amazing in their own way and while they do compete with each other, appeal to very different owners. 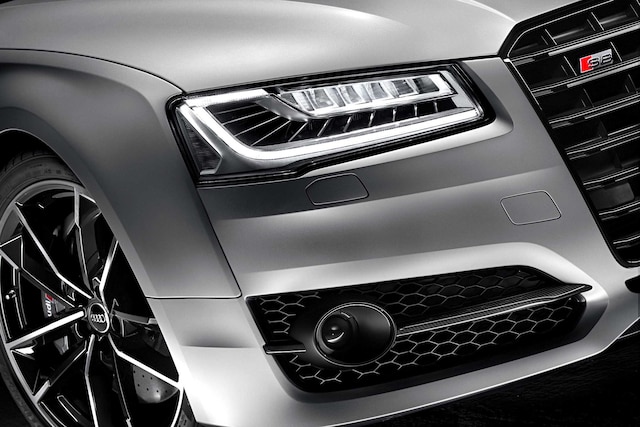 The S-Class strikes me as the car I would most like to be driven in, rather than driving myself. While all three offer incredible rear seats, think international business class, the big Benz strikes me as the most limo-like. The 7-series is probably the most disconnected of the trio for the driver. The tech in the unibody is certainly impressive and an owner can go through all the different materials used in the construction with pride.

The S8 is hands down the car I want to drive. I drove Audi's flagship from Miami to Daytona before the Rolex 24 and even on some of the longest, straightest, and least interesting roads I've ever experienced, the S8 impresses. Freeway onramps become man-child-like gigglefests as all 600 hp can be put to the ground through the all-wheel-drive system without a whiff of wheelspin.

It's strange to talk so much about the driving experience of a car more than 200 inches long and weighing in at more than 2 tons; this isn't a sports car. The S8 doesn't try to hide its size, but instead makes it clear it allows the driver to beat the laws of physics into submission at will. But that still is not the reason I would buy the S8. 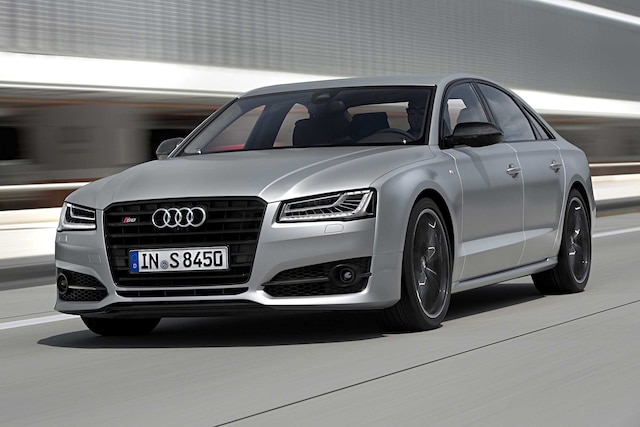 Of the cars in this class, I would choose the S8 because aside from the amazing luxury, the blinding performance, and the loads of tech, this car makes the driver feel the most at home. Or at least it does this driver. The S8 impresses without overwhelming; it's awe-inspiring but approachable. On the long trans-Floridian drive, it was easy to settle into a groove and melt away miles, even in torrential rains. My driving partner and I even stopped for donuts in the S8. To clarify, we ate them, not did them. You wouldn't stop for donuts in an S-Class, maybe a tea cake or even a scone, but nothing as plebian as a donut—and that's the magic of the Audi. You feel at home.

Again, this is my opinion based on driving different cars at different times. This is not a scientific comparison and I'm not saying one car is necessarily better than the other. What I am saying, is that if it were my money, my donuts and I are taking the Audi. 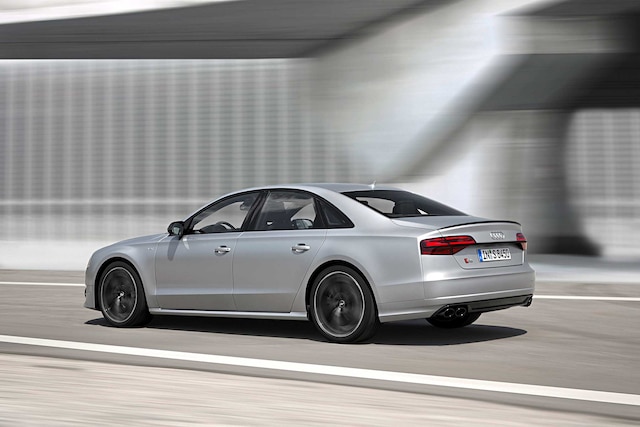 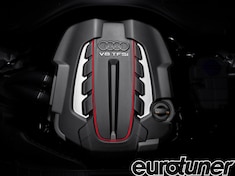 The Frankfurt Auto Show in September will see the arrive of three new S models in the high-performance Audi range, all using the new twin-turbo 4.0 TFSI V8 engine. Keep reading about the new 520hp 2012 Audi S6, S7 and S8 with the 4.0 TFSI V8 engine. - Eurotuner Magazine 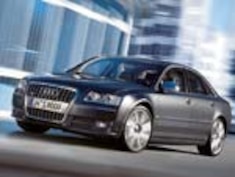