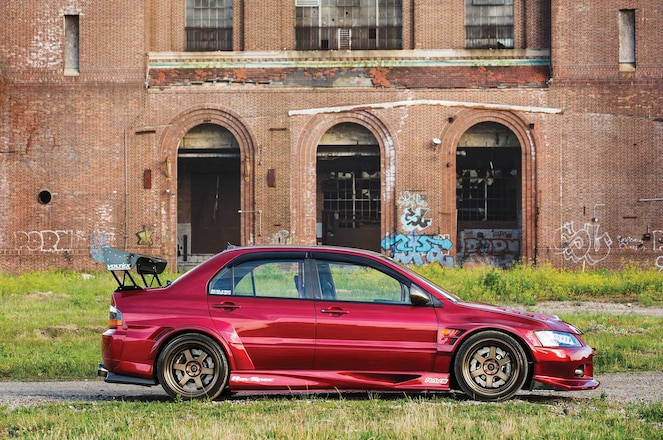 There have been quite a few Mitsubishi Evolutions featured over the years here at Super Street. Some were fully built race vehicles, many more were show cars, and still others did a little bit of both; but we're confident in saying that there are few that were built to the caliber of the one you're looking at now. Nawshin Basher, creator of this masterful Mitsubishi, wanted to encompass the best of both worlds, so he fully invested all he had into this Evo—a project car he originally thought he lost the opportunity to finish many years before. 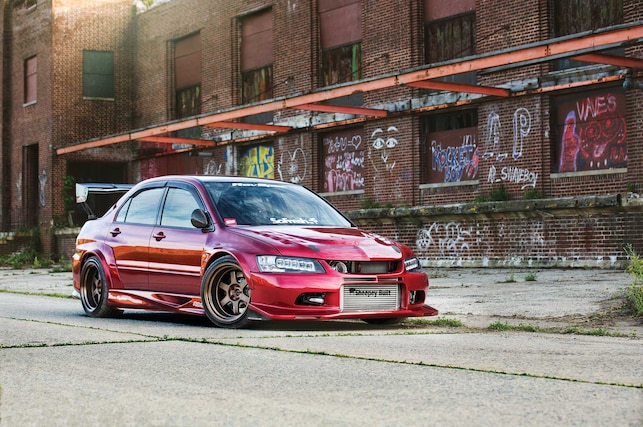 "I used to own an [Evolution IX] back when I was about 21," Basher reminisces. "I had to sell the car due to financial difficulties at the time, but I always told myself I would accomplish my dream of building a full Voltex-widebody Evo. When I was younger I would spend hours watching Tarzan Yamada racing the legendary Cyber Evo and dreamt of having one of my own some day." 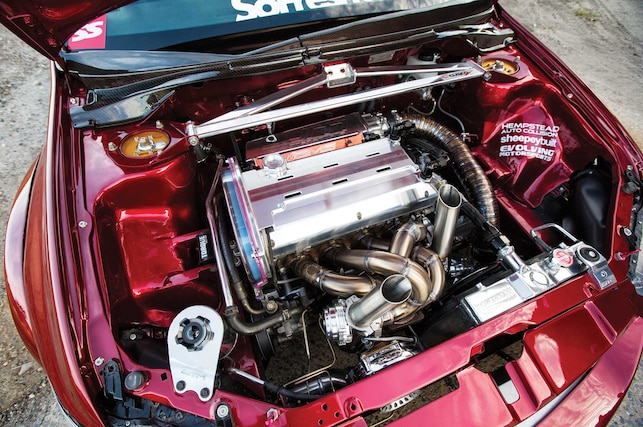 School loans and real-life priorities took precedence over his hobby and Nawshin made the conscious decision to take a break from cars—a four-year break at that. Weaker-willed individuals would have caved during that stretch and jumped right back into modding, but Basher stayed resilient. Parts from Japanese tuning marvel Voltex aren't necessarily cheap, so any dream of building an Evo with all the legit aero pieces would require more than just your basic part-time job. It took time and patience but he eventually saw the light at the end of the tunnel.

"I worked hard, really hard, and saved up enough money to get somewhat close to my dream. This may seem like a finished product but there is so much more I want to do with my Evo. I don't think it'll ever be fully complete," he says. 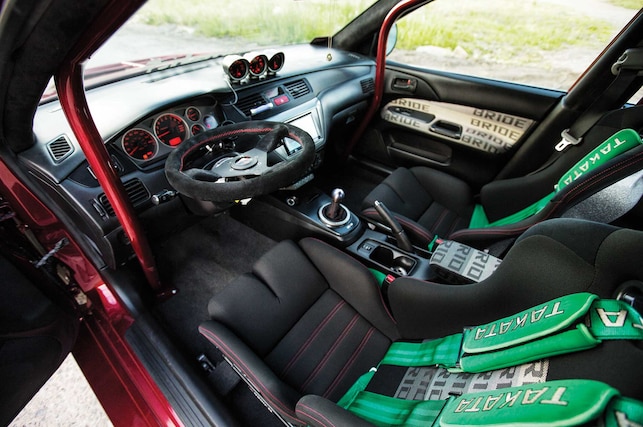 There's definitely an insane collection of parts on this build. If you were to equate a great build with the money spent to create it, this would easily be up at the very top in terms of quality—but real car enthusiasts don't appreciate custom car builds just based on the almighty dollar. In this world, real enthusiasts recognize that execution is everything. You can have all the rare car parts you can buy, but if you don't know how to put it all together, all you really have is a pile of cash wasted. Basher's Evo is a fine example of how to execute a build and present all those great parts tastefully. 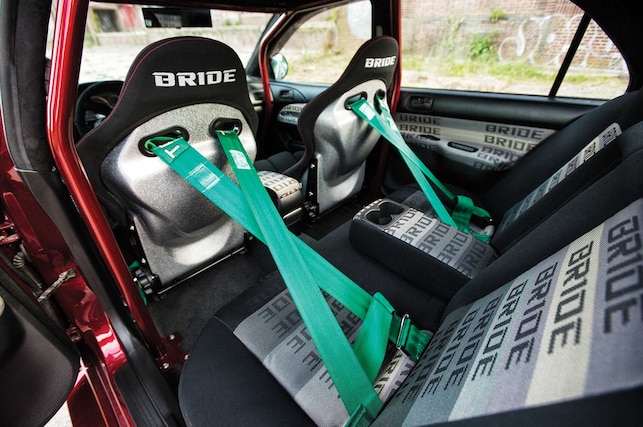 The exterior, as expected, is a Voltex lover's dream come to life. Basher spent all those years admiring the Cyber Evo, and today his own Evo shares the same pieces. The only remains of his once-stock Evo are the chassis and its four doors. The front fenders have been beefed up to house wider wheels and tires while the rear quarters have been altered to receive over fenders. Even the factory roof was ripped out so that a lightweight carbon-fiber skin could take its place. Of the more intricate alterations are the factory headlights, which have been modified for a "Jewel Eye" projector retrofit taken from an Acura MDX. Apex Silver, the original color of Basher's sedan, seemed a little too mundane for his taste, so he had the car sprayed in a custom deep-red PPG mix.

All the Voltex body panels went on after some light fitting, but the most intense reshaping of the body came under the hood. Evo VIII and IX engine bays are often cluttered, but Basher had everything removed so it could be completely shaved smooth. If a part or accessory was deemed unnecessary, it was removed, including the factory power brake booster. A manual brake master cylinder from Wilwood now sits on the firewall for a cleaner appearance. 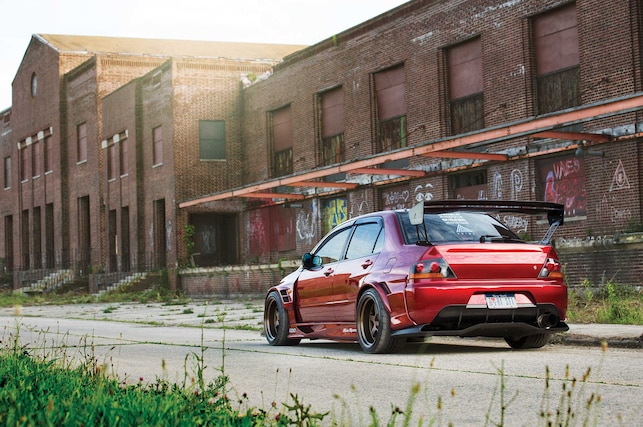 Nawshin could have easily thrown the engine back in with some basic dress-up parts to make it pretty for the shows, but the best aspects of epic builds are those that often go unseen. Under the Frontline Fabrication valve cover is a built head consisting of Power-Division S2 cams and valvetrain components with Supertech valvesprings. The 2.0L block has received an equal amount of work from Evolving Motorsports. The bottom end was carefully machined and upgraded with Manley rods and Wiseco 10.5:1 pistons. Housing the massive Precision 6262 turbocharger is a wild twin-scroll manifold fabricated by Sheepeybuilt. The front-facing manifold makes the Precision turbine visible through the grille of the Voltex front bumper while dual TiAL wastegates are connected to two dump pipes that exit through the vented hood. One of the most jaw-dropping pieces of his entire build is the custom titanium pie-cut intercooler piping, which connects the Sheepeybuilt intercooler to a polished JM Fabrication intake manifold. With the right amount of fuel being delivered from two Buschur Racing pumps and 2000cc injectors, his 4G63, tuned via AEM Infinity, churns out in excess of 680 hp. Like we said, best of both worlds... 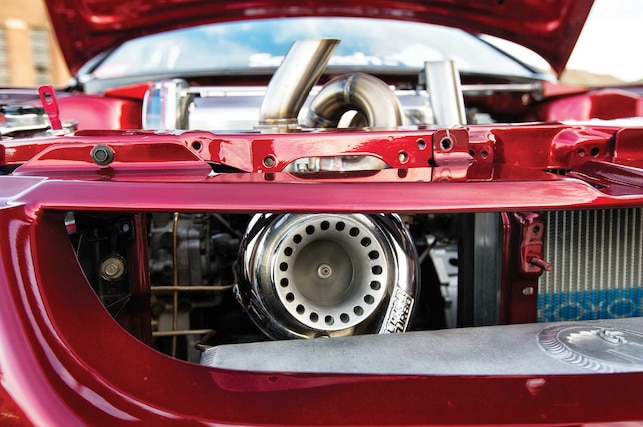 On the other side of the shaved firewall is an interior that has been equally well thought-out. The centerpiece of the cockpit are Bride Stradia II seats surrounded by interior pieces that have been re-wrapped to match. Even the headliner under the carbon roof skin has been adorned in Bride fabric.

Nawshin didn't take any shortcuts in the footwork department, either. Filling the wheel wells are 18x11" Volk Racing TE37V Mark-II wheels. It's uncommon to see a square setup that is this aggressive, especially considering the negative offsets, and the fronts needed some massaging to fit. Sections of the inner bumper and side skirts had to be trimmed so the 285-wide Advan AD08R tires could clear. HKS Hipermax IV SP dampers provide a stiff, vigorous ride through the streets of New York, assisted by Whiteline sway bars and Cusco strut bars that keep everything tight. Anyone can build a good car with an adequate amount of funding, but the ability to execute and put it all together is what sets it apart from the rest—Nawshin Basher has done just that. In the years to come, when you take a look back at old issues of Super Street to see who really did this platform justice, you won't have to look any further—this is the benchmark. 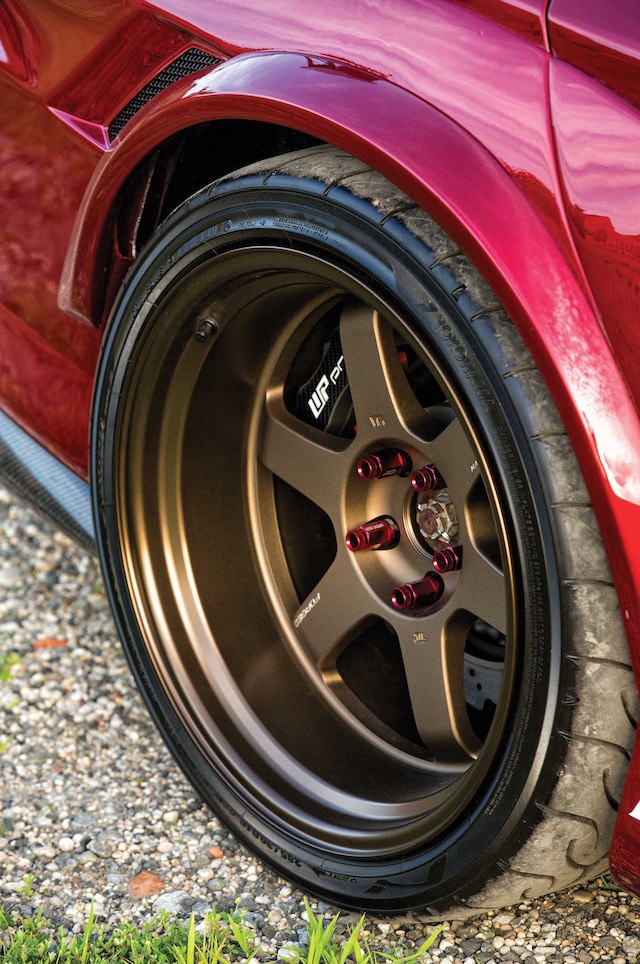 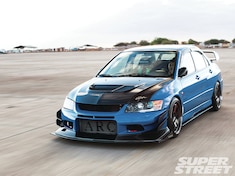 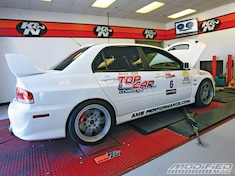 Our Top Car Challenge EVO belts out a monstrous 688whp, but can it get past the stringent emissions test? Read it all here in Modified Magazine. 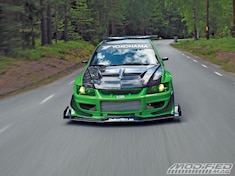 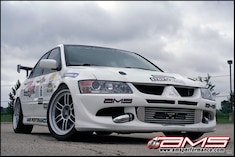 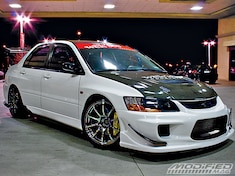 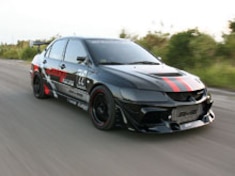 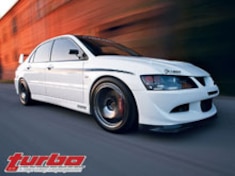 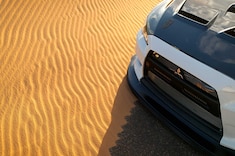