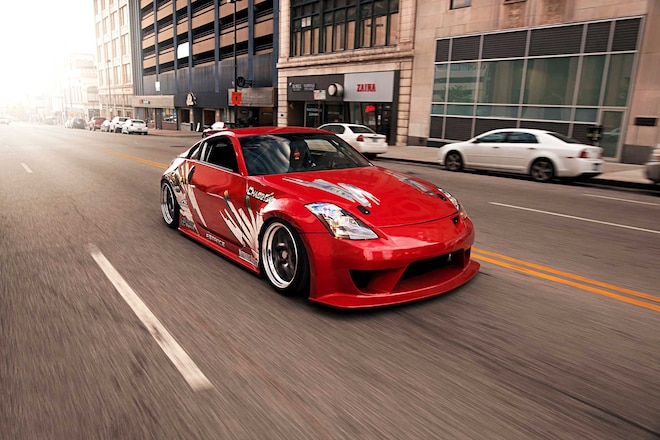 As the saying goes, the recipe for success can be distilled to the two simple ingredients that comprise this article's headline. But the ingredients needed for each part are infinitely more complex and much is the type of thing that isn't discovered until the work begins and problems arise. Especially in the case of launching a vehicle build or motorsports career, it's almost impossible to know at the beginning all that will be needed to achieve success, and the cost of all that knowledge is far more expensive the further down the road you go. So, if building a potent drift machine and owning the competition is your idea of success, take note of Rolando Alfaro and this immaculate Nissan 350Z—he's done just that. 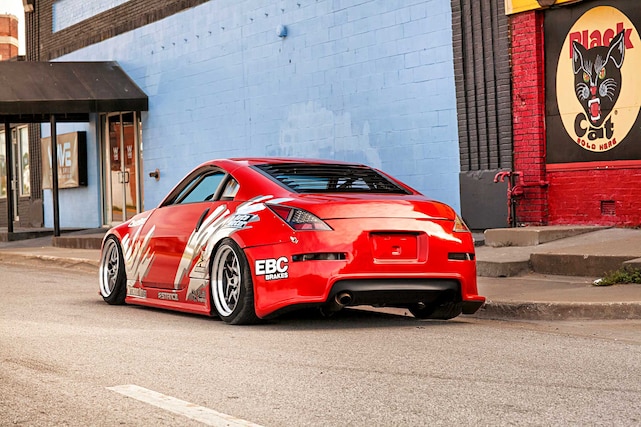 From the start, Rolando has enjoyed a place in life that could be called humble by the mainstream, but regarded as perfect by car guys. He was born and raised in Kansas City, Missouri, by a family who'd built a business around cars, owning a used car lot, body shop and junkyard. Rolando learned to drive at only seven years old, in an '80s automatic Honda Prelude that was kept within the junkyard grounds. A few years later he graduated to driving a manual Isuzu Rodeo in a field next to the car lot, and once he was old enough to take his interest in cars to the streets, his support base helped him procure cars like the Mitsubishi 3000GT VR-4, Nissan R32 Skyline sedan, multiple Toyota Cressidas and Nissan 240SXs, his current BMW E46 M3 daily driver, and this Nissan 350Z.

If all of that doesn't sound awesome enough, Rolando was lucky to have an older sister who lived in L.A. during his formative years, who had connections to the import aftermarket and drifting scene. When one such friend who worked at Enkei Wheels gave Rolando a Keiichi Tsuchiya video during a trip to visit his sister, Rolando knew exactly the direction in which he wanted to steer his budding automotive obsession. 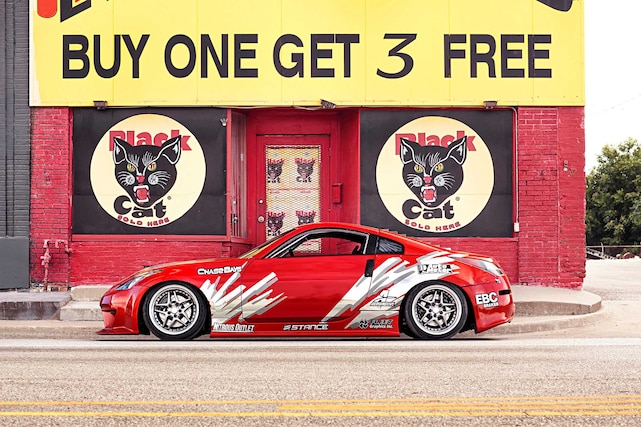 Rolando procured a wrecked S14 for only $750 (a move he regrets: "It's so much easier to start with a cleaner car, even if it's more expensive," he tells), repaired it to OEM measurements, swapped in a venerable SR20DET under its hood, and took it out to the first drift event he could—Drift Indy, in St. Louis—stock suspension and all. After spending the next five years building the S14 and drifting all over the Midwest in what Rolando calls "the time of his life," he'd scored countless pro-am podium finishes, won '13 "Rookie of the Year" honors in Midwest Drift Union competition (an authorized Formula Drift pro-am feeder series), and even picked up some cool odd jobs, like stunt driving in a Wendy's commercial.

During that time, Rolando eventually outgrew the imperfect S14 and knew he needed to up his game if he was to make himself a serious contender at the pro-am level and beyond. When he caught wind of a 350Z competition car up for sale by Matt Bengston, a pro-am competitor in Texas' FD-recognized Lone Star Drift series, he'd found the next step on his path to success. "It was battered and in rough shape," Rolando says. "But I knew I had everything I needed to bring it back to life." 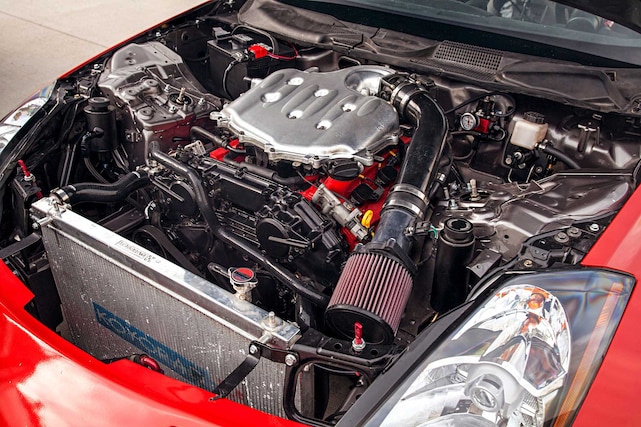 Rolando freshened up the car's exterior and gave it a quick re-paint, replaced the aero and wheels, and used it to earn his FD Pro 2 license by finishing Second in '14 Midwest Drift Union competition. It was like a new door had opened for Rolando with the new car. "It helped me drive how I always wanted to," he explains. "After that season I decided I wanted to re-do it from the ground up and build it into the car it deserved to be."

Rolando's first step was to part ways with his trusty S14 and roll its proceeds into the Z. Within days he had it stripped to its shell. Most of the work he did himself at his family facilities—sandblasting the chassis, replacing previous quick-fix bodywork with more proper repairs (including massaging a new Type-N style kit and Carbon Crafting rear over-fenders onto the car with purposeful quick-release tabs and custom brackets), cleverly retrofitting a set of custom Zakustech louvers in place of the rear glass, and applying fresh paint inside and out. He had some help in fabricating the car's new FD-legal roll cage and hired friend Brian Waggoner, of Fleet Graphics, to cover the Z's body with 3M vinyl. 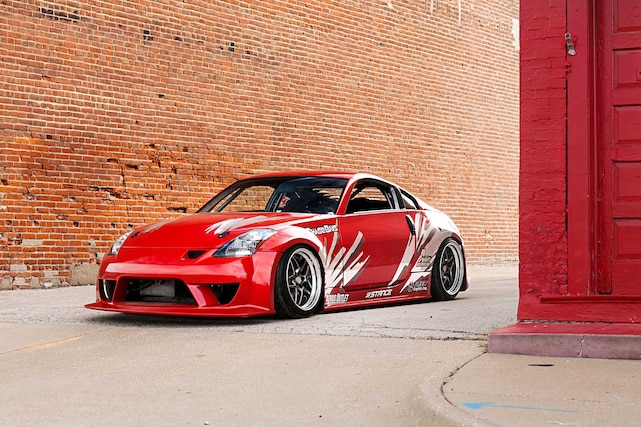 Pop the hood and you'll notice that major mechanicals were kept functionally basic. The Z retains its original VQ35DE powerplant, manual trans and differential, and remains naturally aspirated aside from a 75-shot of nitrous, when needed. Z heads will notice a few factory upgrades and proven intake/exhaust bolt-ons, but what's harder to notice is something that, until this car, wasn't seen on any Z: its Chase Bays engine and chassis harnesses, power steering kit, brake booster eliminator, clutch line kit, overflow tank, fuel line kit, and other goodies added in the name of simplicity, cleanliness and style. "I'd rather have a 300-whp setup that I knew was rock solid and looked good than a messy, 1,000hp setup I was constantly worrying about," Rolando tells.

Poke your head inside the Z's cabin and you'll see that this is a competition-built machine. About the only stock components remaining are its factory dash and center console, which have been retrofitted with Autometer gauges and a custom switch panel, and flocked in glare-reducing black Alcantara, all by Rolando. Opposite all of that are a pair of inexpensive, yet effective Buddy Club seats with Bridgemoto five-point harnesses, a Vertex T&E weighted shift knob, an NRG steering wheel, and an ASD hydraulic handbrake. Just the necessities. 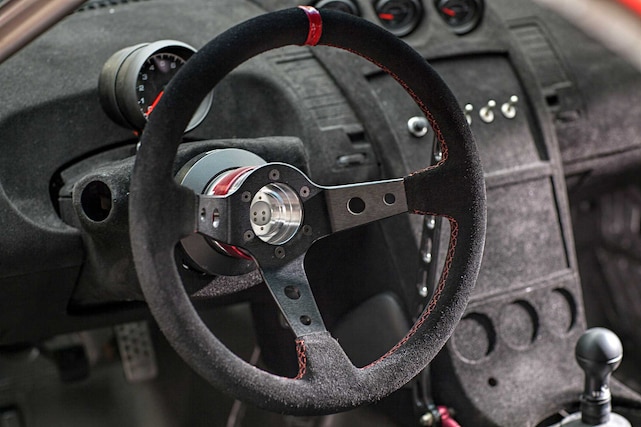 Like his humble, blue-collar upbringing that car guys would regard as a dream lifestyle, Rolando's 350Z is simple on the spectrum of modification, yet perfectly equipped for what it was built to do: shred tires in drift competition, demos, and bashes. As some might see it, Rolando's Z and his automotive resources serve as the perfect preparation to meet the opportunity for the professional drifting that his Pro 2 license provides. We might agree. But Rolando may be a bit more realistic about his recipe for success. "Everything I've done up to this point I've done as a one-man team, building the car, working on the car at events..." he tells. "But professional drifting is something you just can't do without a great team." 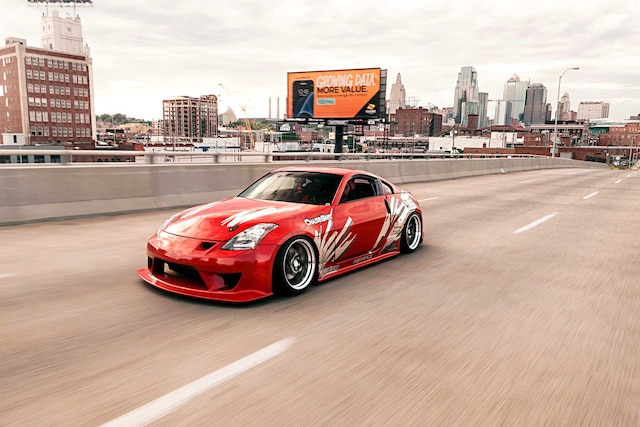 His plan? Enjoy the Z for the next year or so, hitting all the major stops (Gridlife, Street Driven Tour, demos at Midwest Drift Union rounds, etc.) and enjoying the slightly less competitive and more carefree side of drifting that is the amateur/pro-am world, while building a fresh, supercharged VQ engine and continuing to expand his network of teammates and brand partners in hopes of launching that successful pro bid. We won't lie—the odds are against him. After all, there are only a few Chris Forsbergs, Fredric Aasbos, or Vaughn Gittins among thousands of talented amateur drifters in the U.S. But there's also only one Rolando Alfaro, and if he can apply the recipe that's brought him success thus far to future endeavors, there's no telling what level of success he'll achieve. 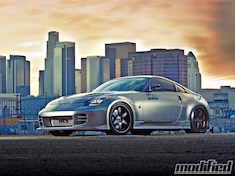 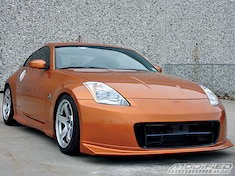 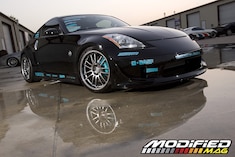