You're on your way home, having just picked up farm-fresh eggs and organically grown produce from your community-shared agriculture project when you spot it—a curb space slightly larger than an iPhone 7, not even a Plus, on the opposite side of the street that six SUVs, each trolling for coveted street space, have had to begrudgingly pass up. You whip the wheel on your Smart Fortwo Cabrio and pull a 180 mid-street, taking advantage of its 22.8-foot turning radius, claiming the space in one graceful arc. Stroking your perfectly waxed handlebar mustache, you catch a glimpse of yourself in the mirror and smile as another frustrated would-be parker in comparatively big and inarguably duller Prius passes by giving you the stink-eye.

The ability to fit into nearly any urban parking space is but one aspect of the Smart Fortwo Cabrio's versatility. With its redesigned folding soft top, it intends to capture three cars in one package: The touch and hold of a button slides that soft-top back to provide an open-air sunroof. Lift and hold it again and the ragtop motors the rest of the way down, making the little Smart an almost-cabriolet. It would be great to push said button again and transform to the final stage—into a true cabriolet—but this isn't the case. To reach its final evolution, two crossbars must be manually removed and stored just right in the rear storage space. While dismantling the crossbars is accomplished simply, the fact that stage two can be achieved while driving and stage three requires stopping, balancing, and organizing, it stands to reason that stage three will be rarely achieved. And that's fine; the top will still fold down in the back with the crossbars in place so they can be left there — ironically - of course, if desired—like wearing flannel with suspenders and sporting a full beard in July.

Like the coupe, the convertible benefits from an all-new turbocharged three-cylinder engine, and you can have it with a stick or the brand-new dual-clutch automatic. Need to put the power of all boosted 89 horses at your fingertips? The five-speed Passion version might be for you (we say "might" because you can't get the optional $600 Sport Package with a manual transmission, but more on that later). If you want the car to do the heavy lifting, try the vastly improved action of the six-speed Twinamic dual-clutch automatic transmission. In either case, the new Cabrio is said to eek out 94 mph. And while its predecessor was a little unstable at high speeds, the application of Mercedes Crosswind Assist safety feature on this one might just mean that you'll stay on the road as the 18-wheeler barreling down on you passes in a huff.

Unsurprisingly, the Smart Cabrio makes a lot more sense in daily urban driving; the aforementioned turn circle is a hoot, and it's still a breeze to park. We can't heap enough praise on the new turbocharged engine, but that's mostly because it's that much better than the last one. This one still transmits a rough idle through the cabin, and the turbocharger doesn't really kick in until higher engine speeds—it surely ain't your "torque down low" archetypical modern German turbocharged engine. That dual-clutch automatic, though a blessed upgrade from the single-clutch transmission of before, still leaves a lot to be desired. It takes its time to slip the clutch from a stop, often leaving you missing gaps in tight traffic. Things are a little better in Sport mode, but you're not going to be setting records at the drag strip for reaction times. We'd be curious to try the manual transmission car.

The engineers at Smart have apparently heard it's more about girth than length, adding nearly four inches of width to this iteration. While we wish in principle that the new car were as narrow outside as its forbearer, the extra inches make a lot of sense once... You know... Inside. There's a much more upscale feel this time around—it's still small, but for the most part not cramped. Some of the instrumentation is oddly placed and, unless you're a contortionist, you may pull a muscle accessing some of the switchgear. The lack of an adjustable steering column is a considerable inconvenience if you have Jurassically proportioned upper limbs or can dunk a basketball flatfooted.

The new Fortwo Cabrio is available in three trims: Passion, Prime, and Proxy. Passion serves as the $19,650 base model cabriolet (Pure is a lower trim offered only on the coupe) and includes stuff like 15-inch wheels, a height-adjustable driver's seat, heated power mirrors, and a giant palette of two-tone color options. Prime, which is what we're driving, gets unique 15-inch wheels, a leather multifunction steering wheel, heated leather seats, and fog lights for $1,000. You can add the $600 Sport Package to either car, which gets you paddle shifters, unique black 16-inch wheels, and a sport suspension. And no manual transmission. Finally, there's the top-line Proxy, which for yet another grand is the only way to get a manual transmission and the Sport Package. You also get a two-tone blue/white interior that's a mix of cloth and fake leather and a JBL sound system. Though this edition comes with 16-inch wheels, you'll shell out another $100 if you want the blacked-out Sport wheels of the Sport Package you remember from the lesser trims. In any case, you can add the Brabus package for $1,900, which gets you a unique suspension (lowered 10mm, like the Sport Package, but with Brabus damping and spring rates), staggered 16/17-inch Monoblock IX wheels and summer performance tires, a matte-grey rear diffuser, and body-color spoiler and rear apron. You also get grey stitching on a Brabus multifunction steering wheel as well as logos on the shifter and handbrake lever.

If we were made to choose, we'd opt for the base Passion with that five-speed manual transmission and add the Brabus package for $1,900. But with over 100 body color combinations and two available canvas top colors, there's sure to be a Fortwo Cabrio for every buyer. Even inside, the choice of cloth, leather, or fake leather serves to satiate the sensibilities of meat eaters and vegans alike. So put on your florescent pink socks, peg your pants, grab your multi-color, organically spun, hemp-haired, sweater-wearing partner, and proudly pull up to your Save the Red Cockaded Woodpecker rally in style. 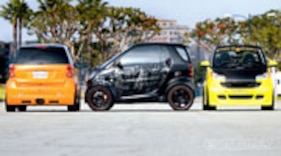 Of the trio featured here, two show off the tuning capabilities of the newer-generation Smart Fortwo available to North America. The pair belongs to Smart Madness, (www.smartmadness.com) a company dedicated to personalizing Smart Cars.The third owned by Sean Alinaghian is the first-generation '02 coupe, which was imported from Europe years ago. - Eurotuner Magazine 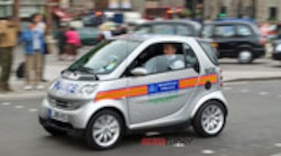 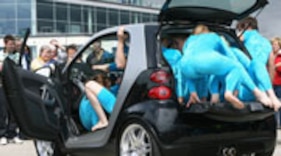 How Many People Can You Squeeze Into a Smart - Web Exlusive

How Many People Can You Squeeze Into a Smart TwoFour? Read the full article here. - Eurotuner Magazine