A carbon fiber-clad DC2 13 years in the making 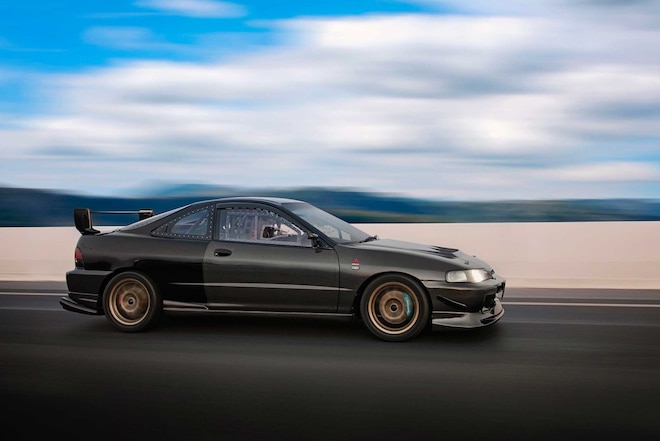 It was like the scene out of a movie, or more accurately, an over-dramatic love story. Searching high and low through Thailand's pouring rain, Lertsiri Boonmee came across what could only be described as love at first sight. "A Championship White JDM front end was peeking out at me. Everything went blurry except for those '98 spec headlights. I knew immediately that it was fate."

Cheesy scripts aside, in actuality, Boonmee's girlfriend had given him just a short 10-minute window to keep looking for a used car in the torrential downpour that day and, as luck would have it, this DC2 and its future caretaker happened to lock eyes. 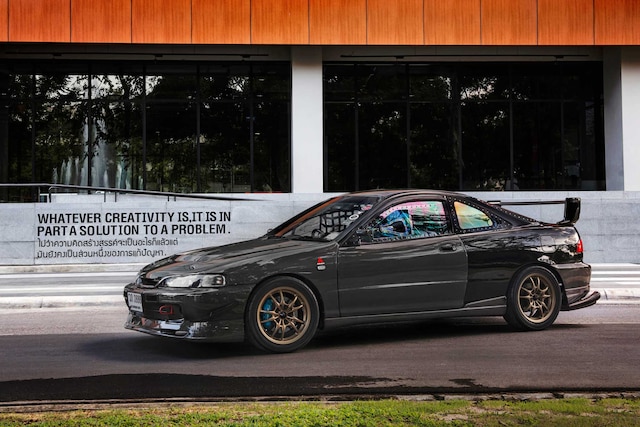 For the next 12 months, Boonmee had his way with the B18C and '98-spec transmission combo that regularly plastered a smile across his face, but admittedly he didn't really know where to start with any future upgrades. That would all change after a chance meeting.

"I met a friend who was crazy about the DC2 and he recommended I go to this engine builder/body shop garage for a makeover." As fate would have it, the shop owner was already very well acquainted with the car, as he was responsible for all of its modifications up to that point via the previous owner. 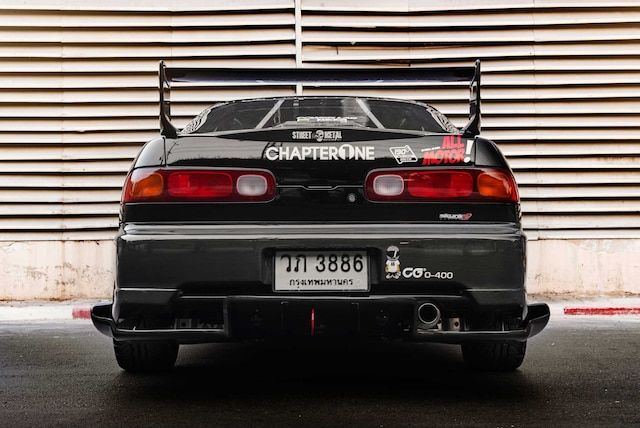 The first stage of Boonmee's build was initiated when he stripped the car down to its bare bones in order to have a complete Imola Orange color change applied. With the engine out of the car, a set of Spoon pistons made their way into the 1.8-liter block while the cars windows, also out during the bodywork process, were replaced with Lexan versions. With everything reinstalled, a custom, uninterrupted 2.5-inch titanium exhaust system was fabricated and connected to a Spoon N1 muffler and it was off to the dyno. Not exactly thrilled with the power numbers, Boonmee decided it was time to get a little more serious. The head was ported and polished, the valvetrain upgraded and a number of different cams experimented with until a set of Toda C2s were decided upon. And just like you, me, and any other avid enthusiast in any part of the world, he wanted more. He adds, "We modded the engine and had better power on the dyno - but it still wasn't enough." 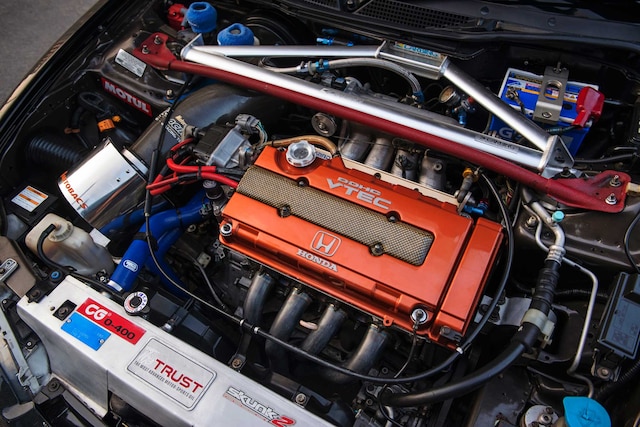 As good as the B18C engine is, Boonmee wanted more torque via increased displacement and figured the easiest way to do that was a B20/VTEC set up. The original low-compression pistons were swapped out for 85mm CP slugs joined to Manley rods with ARP hardware. Up top, the VTEC head was fitted with Ferrera valve guides and Buddy Club P1 valves, while a custom billet 68mm throttle body was bolted in place. On the hot side, a custom-built titanium header was constructed to direct spent gasses to the previously mentioned titanium exhaust. Attacking the gearing, a one-off straight cut gear setup combined with a 4.929 final drive help take full advantage of the now 252hp output. 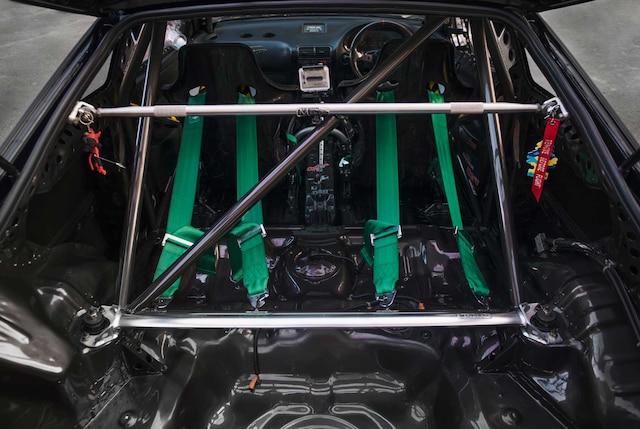 While all of the power upgrades were underway, that bright orange body that would draw eyes at every turn was taken in a completely different direction, refinished in satin black, but not before the entire chassis was stitch welded. In addition, gone was the rather frail Cusco bolt-in cage, replaced by a custom cage that includes X-bars at each door that anchor behind fiberglass modified door panels. In an effort to shed as much weight as possible, a carbon fiber hood, bumpers, sideskirts, fenders, and doors were brought in to replace their metal counterparts. 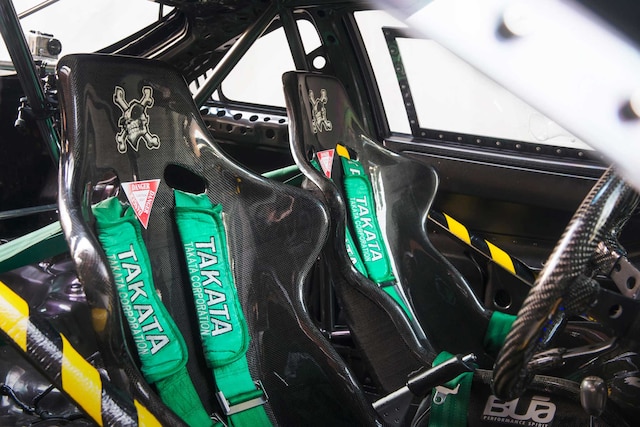 The high-carb diet didn't stop with the exterior, as a set of custom carbon fiber seats that were actually molded to Boonmee's body during their design are bolted to the chassis via Bride super-low rails. Even the steering wheel was replaced by a one-off carbon version, cinched with titanium hardware and, of course, highlighted by an NSX-R horn button. On the passenger side of the dash, you'll notice two holes just above the glove box, and that's under advisement from Boonmee's better half. He states, "Well, my wife wanted cup holders, so we used two soda cans and some fiberglass to create a set of cup holder holes on top of the dash, just above the glovebox!" 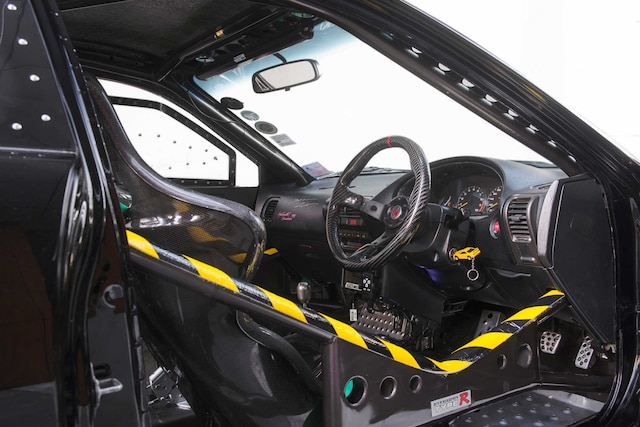 Having added so many custom bits and pieces to his project, Boonmee's favorite addition isn't something you can see from the outside. Last year he got his hands on his most prized possession; a set of Mugen billet front lower control arms. Intended for use in a JTCC racecar, these never installed pieces weigh just a fraction of the OEM version and are most likely the only ones to ever make their way to a street car. 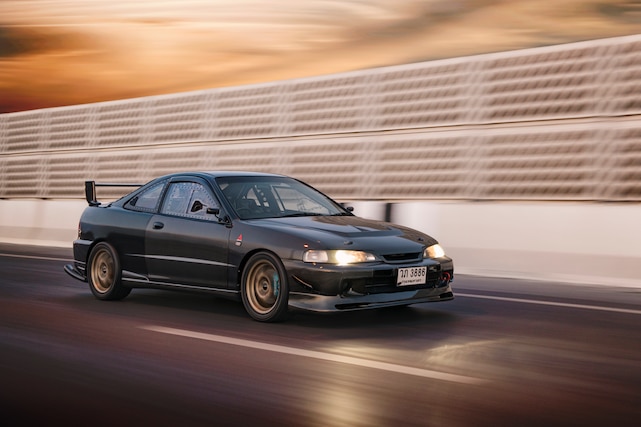 After 13 years and multiple extensive changes, Boonmee is content with his creation. The car is a daily driver on the streets of Thailand and is even used to transport his offspring on occasion. He adds, "When I drive my son to school, he points at the rev meter and says 'VTEC, dad!' Over the years my original dream to exceed the Type R-spec Integra took shape. I gave my car a nickname, 'Type R-Core', because to me it represents the hardcore feeling that the DC2 R embodies, but is more focused on the actual core of the Type R - spartan and usable." 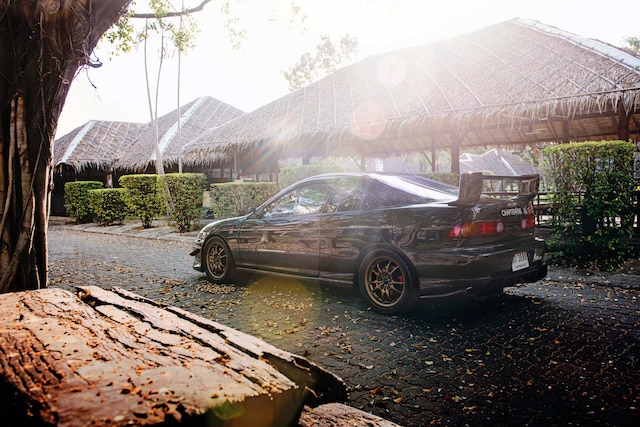 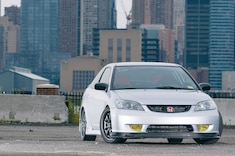 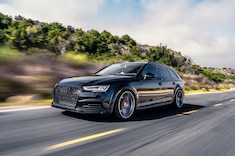