Who'd a thunk it? Chris Forsberg can build award-winning cars, like this 280Z 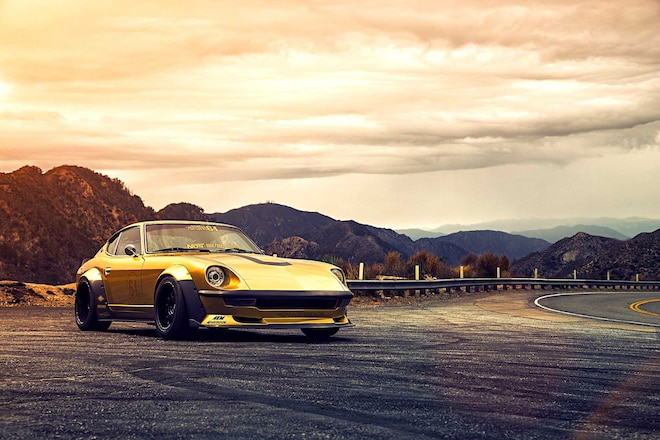 Chris Forsberg had a hell of a '16. He nailed his third Formula DRIFT championship, found time to stunt around in viral videos with the Donut Media crew, turned a missile car into a daily driver, and most recently won a pair of awards at SEMA with his Datsun 280Z you see here—Best Import for the Sony Gran Turismo Awards as well as our Best of Show for the second annual Super Street SEMA Awards. Noticing a trend here? All Z-cars. It's a relationship with one of Nissan's beloved sports coupes that started in '03 when Forsberg was looking to see if he could turn this drifting "thing" into an actual career, before there even was such a thing as Formula D. After moving to California (for the first time) from Pennsylvania, he decided he needed something newer and a little bit nicer than the '88 Mazda RX-7 he owned at the time. So he went and financed a brand-new 350Z right off the lot, swapped an SR20DET into it (the first ever), and started drifting with it in FD's first season the following year. "The Z has been a great chassis [for drifting]," he says. "I feel fortunate that Nissan worked with me throughout the years, allowing me to stay with it and develop it into the package it is today." We chatted with Forsberg about his drifting career, what it takes to be a competitive player in the current game, and why he built this crazy, sexy, cool show car. 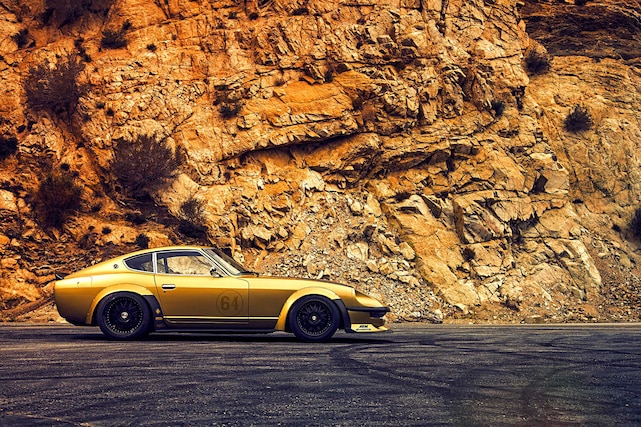 On his drifting roots with Drift Alliance—How did a bunch of East Coast guys get into drifting?

"I first started drifting with Tony Angelo, who learned about drifting from a friend who lived in Japan. He would transfer RealPlayer videos, before YouTube, to all of us guys drifting on the docks. We also learned about the Japanese anime Initial D, too, and from there we would try to drift around in empty lots. We slowly learned how to drift based on trial and error, without setup tips, tire size, or pressure recommendations...nothing. Then we started one of the first—and now longest-lasting—drift events in the country with Matt Petty and Mike Napp at Raceway Park in Englishtown, New Jersey. We made a short promo video and posted it online—a lot of people saw it, which got people out to our events. Drivers like Vaughn Gittin Jr. and Ryan Tuerck—we all quickly hit it off and the rest is history." 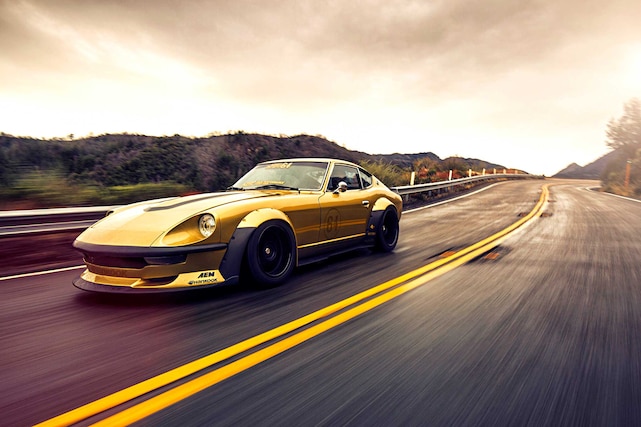 On bettering himself as a driver—What advice would he give to his '04 self?

"It's difficult to give the same advice to someone now as it would be to myself in '04. Back then, drifting was brand new and I don't regret any of the decisions that I made to pursue the career of becoming a professional driver. But things were also different then... Import drag racing was falling off and drift was new; if you could handle your car around a track, you were able to pick up sponsors. Now there are lots of drifters, all with as much enthusiasm as the next, which makes it much more difficult to stand out in the crowd. I get emails every day asking how to get sponsored, and while I can appreciate up-and-comers asking someone else for tips on how to achieve their goals, the big answer is that you need to find a way to become the best possible representative for that brand. Don't just go and ask anyone for money; that's not how it works. Grow a relationship with that brand, build your audience, and make yourself a spokesperson. Find ways that make you more relatable than the next driver."

On being a three-time Formula Drift champion—What will it take to remain competitive?

"To remain a championship contender, you have to continue to push yourself mentally and physically. Your car also needs to be developed constantly to remain in contention because you can bet that your competition will be working to improve theirs. There's more to it than just making 1,000 hp and having a good tire; you also need to find new ways to make your car more driveable and more agile. Every year it gets harder and harder to find that competitive edge while remaining within the rules, but thankfully I've been lucky enough to work with some talented people over the years who have helped me stay competitive. It's easy to say that Vaughn Gittin Jr. and Frederic Aasbo are my biggest competitors as they're both incredible drivers, but the true competition will always be with myself. Of course, it's not always about winning; I have a lot of fun doing what I do, but so much effort goes into running a professional team. I figure if I'm going to do it, I want to do it well! That means I go into every event pushing for a win and every season pushing for the championship. So far I've been able to finish on the podium 8 out of 13 seasons, all starting with a third-place overall finish in the very first season of FD." 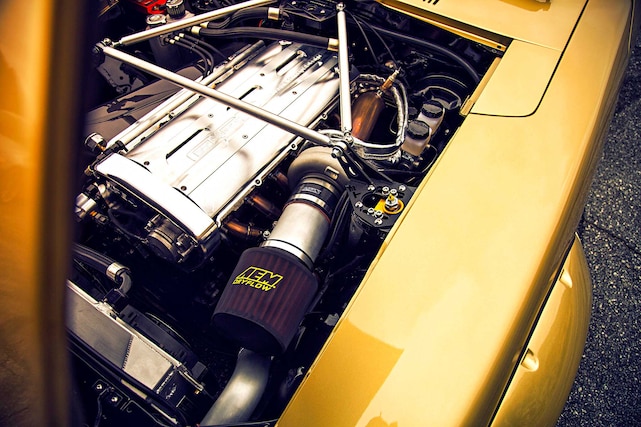 On rebuilding this 280Z to full show spec—Is this thing really all show and all go?

"I purchased the 280 with the intention of cleaning it up and putting some nice parts on it—that was, until AEM asked me to display it in their booth at SEMA. I've never had an opportunity to build a car [specifically for SEMA], and this car was hardly a showstopper, so I went for it. Thankfully, I had a bunch of great partners come on board with support, and Rad Industries helped out with the physical workload. It's a great time for '70s-era Japanese cars to shine again—before it was the classic American scene, then the Euros, and now the Japanese classics are here. I don't think I'll drive it as hard as my competition or missile cars since I push those to the max, but I'll be driving it regularly. Maybe do a little drifting." 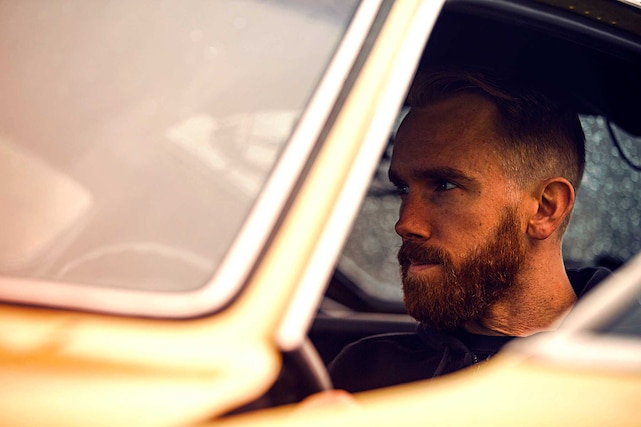 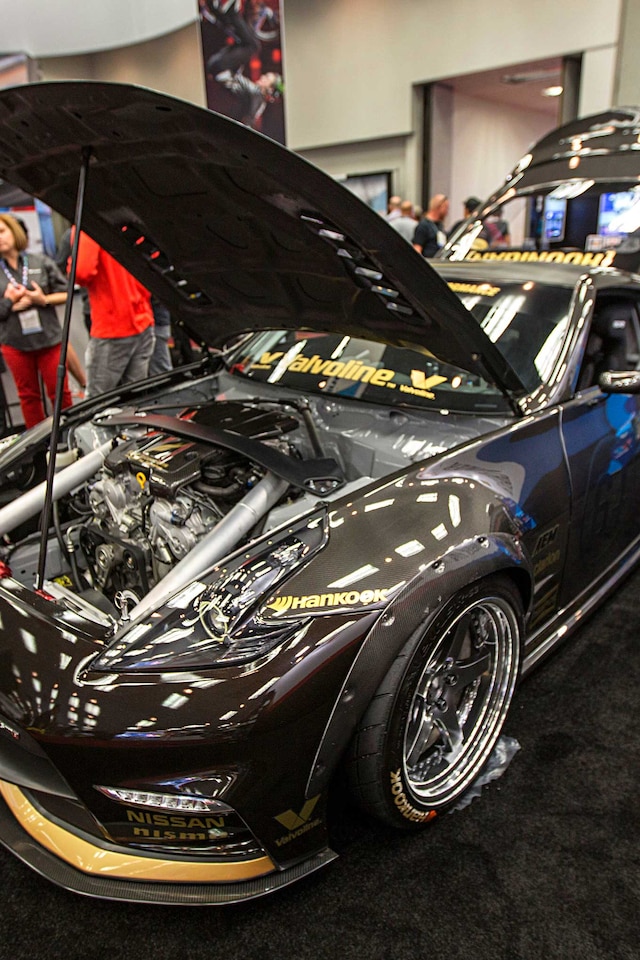 The twin-turbo 370Z you see here wasn't originally intended to be used for the street, but it could've been if Forsberg wanted it to be. After building it for Drift Garage, the car was stripped down for the chassis prep that was required to get it to the level it's at now. "All of the parts that were used before the rebuild went back onto the chassis," he says. "Except now it has a full Formula Drift-spec rollcage and all the safety equipment required to pass tech at drifting events." Forsberg says the fab work is top level, some of the best work he's had done by his friend Dylan Hughes, who did the 'cage; Brian Wilkerson from MA Motorsports did all the rear fab work to fit the bulkhead, fuel cell, and rear-mounted radiator. For his next project, Forsberg may take a step away from a Z box for once after all these years but it won't be a huge one—he's thinking about a 510 wagon, which will be made into a "comfortable daily driver for my wife." 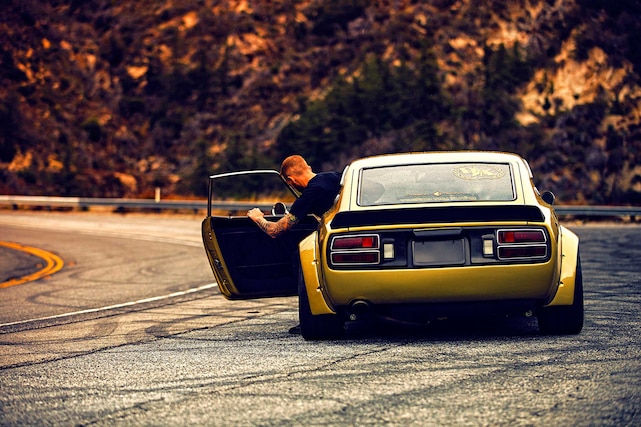 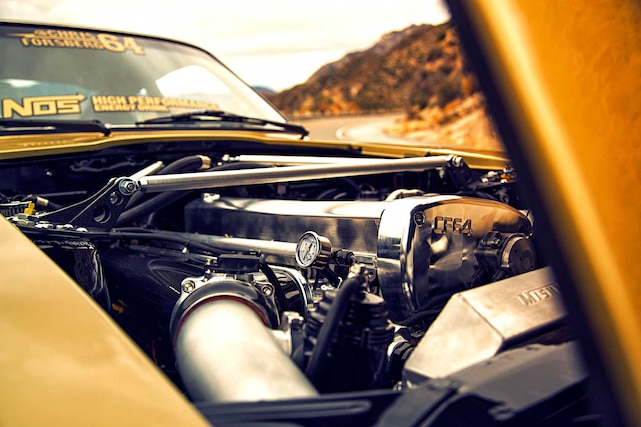