A VW GTI built by a tuning industry professional 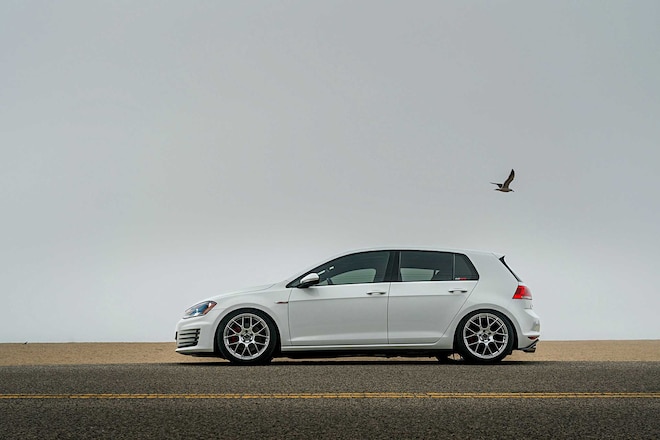 The 2013 MK7 GTI Concept debuted at the Paris Auto Show in September 2012 and was an instantaneous hit. From its new, crisper styling to the prospect of bringing a diverse portfolio of applications on the new MQB platform, it was exactly what VW customers had been waiting for. The only hitch: Americans had to wait until 2015 to get their hands on one. 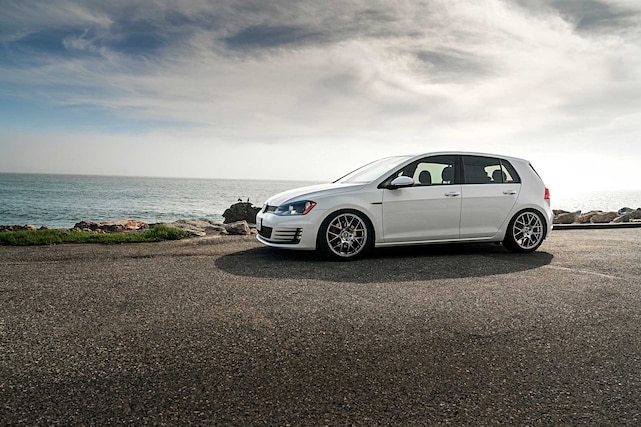 Luckily for Brandon Scarpelli, he had an advantage over his fellow Americans and was living in Rome when the MK7 GTI hit European showrooms. It wouldn't be long until he placed an order for his, sight unseen, to meet him in America upon returning Stateside. Of course, that took a little more than a year, but he made it and the car was his. He was even rewarded with a GoPro camera for ordering one of the first 500 cars in America—remember the Tanner Foust campaign?

Brandon's day job is a PR rep for some of the most iconic brands in the aftermarket industry, so he is well versed in the ins and outs of car modifying. A new daughter also meant he had to take his personal responsibilities into consideration since this was going to be his daily driver after all.

Brandon isn't a normal tuner, if such a thing exists. He's obsessed with tracking performance and seeing what combinations really work. The only difference here is he'd have to factor in a car seat and gear that comes with having a baby. You know, a stroller, a diaper bag, toys, and all the other accouterments society deems necessary to keep a new human being happy and well adjusted these days.

He began tracking his mods through a spreadsheet. Every new acquisition was logged, along with the date of installation and the car's mileage at that time. This is wonderful for journalists like myself to see the history of the car but also understand what combinations worked best for the driver's needs during a specific time of the car's history. 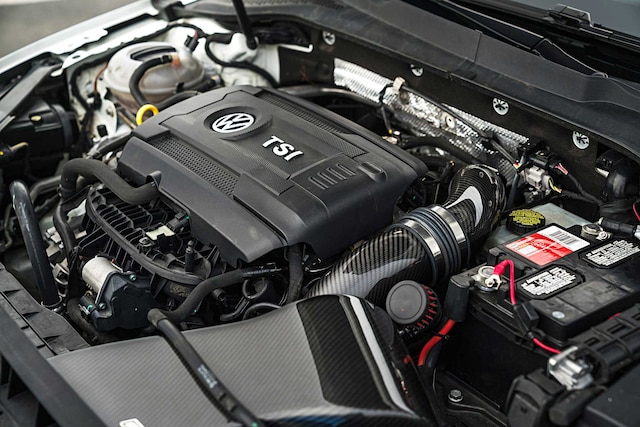 If only every modded car came with such a well-documented mod list.

When it comes to tuning a car, balance is often overlooked in favor of an obscene power figure or silly fenders and wheels that cost more than the car's overall five-year depreciation figure. For Brandon, balance was paramount. Too much power and the efficiency of the car might be ruined. Too rigid and he'd be spending more time at the doctors explaining why his toddler was experiencing discomfort in her neck. Too loud and, well... you get the idea.

What he ended up with is a calculated machine that was edged ever closer to his ideal performance goals a step at a time. He wanted it fast enough to be challenging at a track day and comfortable enough that the family wouldn't hate him for modifying his car.

Lowering a car is often the first step many individuals take when it comes to tuning their cars. It's a right of passage for many of us as it announces to the world, "I'm doing something far more interesting to my car than most of you ever will in your entire lives." OK, maybe that's overdramatic—but you get the point. 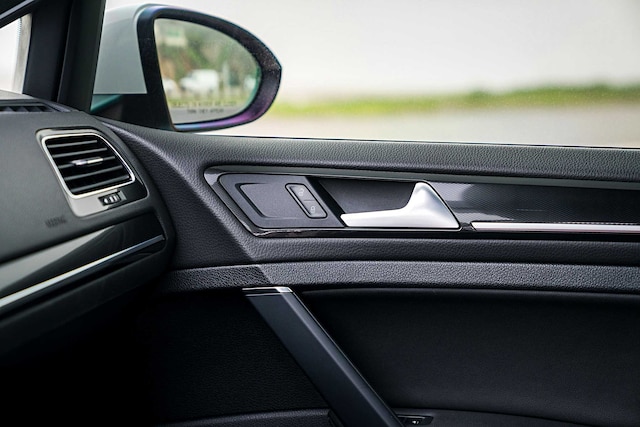 Brandon decided the first toe into the water would be a modest drop spring kit from Megan Racing. After all, the car was brand spanking new at the time and development cars were in high demand. Next, he would opt for an APR Stage 1 ECU software update and a Neuspeed Torque-Arm Engine Mount insert to keep the beefed-up power in check and transferred to the tarmac. A drop-in K&N filter helped the car breathe a little better and some 18x8.5" Enkei Raijin with Pirelli PZero tires were fitted to add a bit more attitude.

When a set of Megan coilovers arrived shortly after his entry-level mods, it was "downhill" from there. The car needed to be a bit more responsive, and the handling had to improve. It couldn't just look good. He upgraded to an AEM cold-air intake along with a P3 vent gauge to monitor the essential vitals of the car. This would come in handy since he bumped the power even more with an APR Stage 2 ECU upgrade, accompanied by the much-needed DSG transmission performance upgrade. Ask any DSG performance driver and they'll say this is best thing you can do for your car to get some of the compromises out of the transmission calibration. A Borla exhaust helped the car sing a new song, and what good is a light-duty track car without beefy ST front and rear sway bars, improved Eurocode endlinks, and a set of newly released ST XTA coilovers? 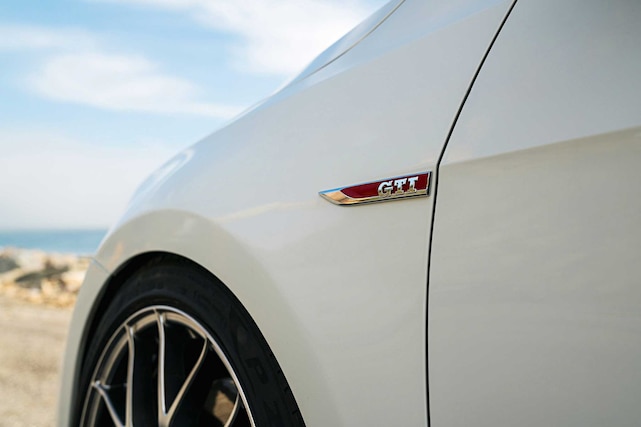 Yes, big brake kits look and act the part, but negotiating with your better half about spending six months of your daughter's nanny budget on a set of "larger brakes" doesn't win a dinner table argument. Instead, maximizing the potential of the well-engineered and stress-tested factory brake configuration is the economic way to go. Simply adding EBC Red Stuff pads, a set of Goodridge stainless lines, and proper performance brake fluid, in this case Motul RBF600 fluid, kept everyone happy.

On the road, you can feel the fair and balanced approach Brandon took in tuning his car. It's exactly what an occasional track day enthusiast would want. Grip, acceleration, braking bite, precision turn-in, they're all here. The exhaust note is a bit louder than some would like for a daily driver, but under normal cruising speeds, it's tame and won't drown out a conversation.

Brandon's car is one of our favorite examples of a well-tuned GTI. It isn't overdone like so many of the "parts hanger cars" that are clearly a result of some owner's multiple episodes of impulse buying attacks with no real plan of attack. This GTI started with a goal and a plan was developed to get there. He wanted to improve the performance of his GTI for the track without sacrificing anything that makes it such a great daily driver. Brandon's car is clean, simple, and most importantly, exactly what he was after. 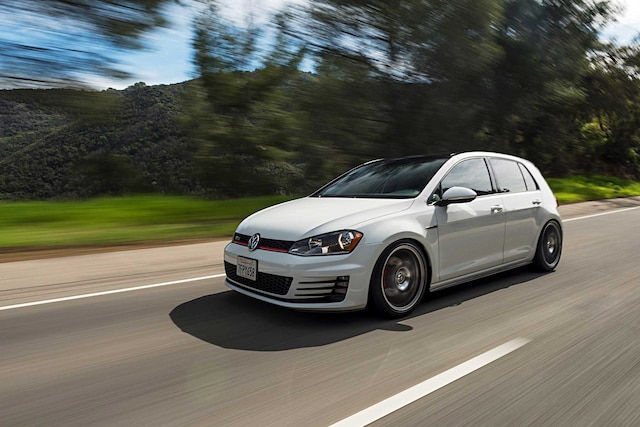 Brandon and his well-built GTI were scheduled to compete in our 2.0T Grand Prix. Sadly, he was one of two competitors whose hopes were dashed because UPS "lost" their tires. That is correct; two competitors only received two tires each from the big, brown truck. At first, we thought it was strange that two tires, taped together, could get lost. Once we heard that two sets of two tires had disappeared, it suddenly made a lot more sense. So if you know anyone who was running a set of Continental ExtermeContact Sport tires, before they were even on the market, please let us know. We'd love to meet that person. 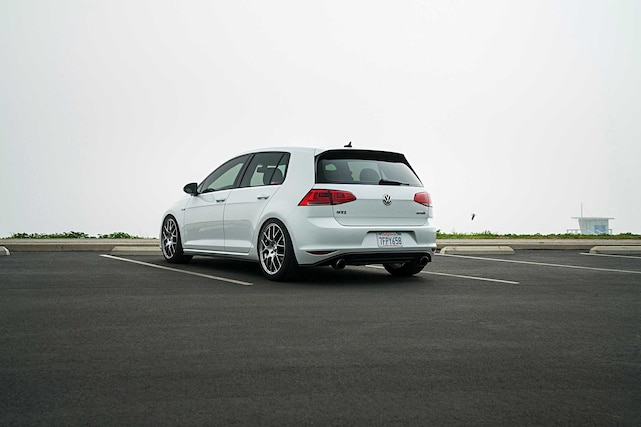 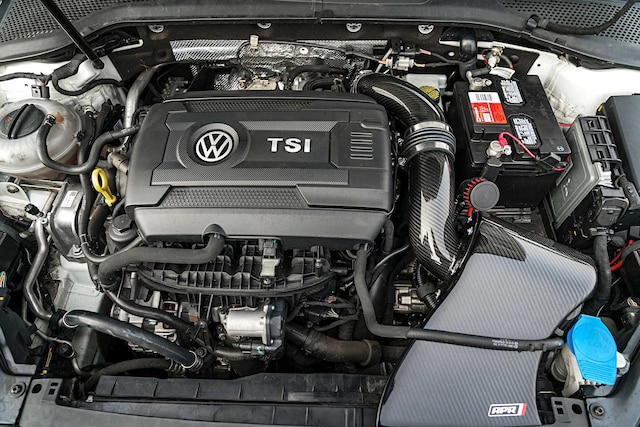