Driving the mid-cycle refresh of the 7th-gen VW Golf 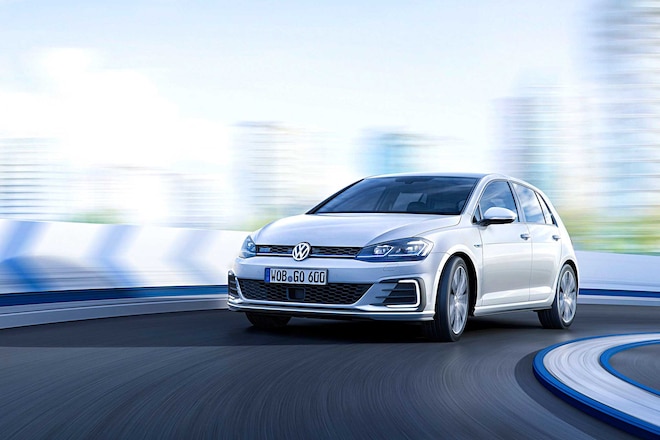 The mid-cycle refresh has become an industry standard for car companies keeping a car model around for five to six years. What that refresh includes is anything but standardized, ranging from minor cosmetic updates all the way up to Porsche switching from naturally aspirated to turbocharged engines in the second-generation 991. Volkswagen hasn't gone quite so extreme as switching engine philosophies with the MK7.5 Golf family, but we did find some worthwhile updates in the new cars.

First, I should point out, the e-Golf is actually updated for the 2017 model year, while the rest of the line gets updated for model year 2018. I drove the new e-Golf in Los Angeles a few weeks before driving several of the other Golfs in Germany and Austria. It seemed appropriate, piloting the all-electron-fueled Golf through traffic-choked L.A. while getting the other cars on the winding mountain roads and high-speed Autobahns of their home turf.

The most important change for the MK7.5 e-Golf is unquestionably the increased battery size to 35.8 kWh, up from 24.2 kWh of the previous car. Range has increased from a rated 83 miles to a much more usable by the average person 125 miles. The electric motor has also been improved going from 115 hp and 199 lb-ft of torque up to 134 hp—the same as the old 9A 2.0L 16-valve if I remember correctly—and 214 lb-ft of torque, more than we ever dreamed of in the MK2 Golf days. The 7.5 might feel just slightly faster, but having driven several of the pre-refreshed cars that I wasn't quite sure how you had to drive them to get 83 miles out of a charge, the new car seems like I could easily get 125 miles from charge to charge. The average person on the street won't notice the styling differences, but if you're a Golf geek like me, the new bumpers, front fenders, and LED headlights and taillights will be immediate tip-offs that this is the new e-Golf. I should point out, the entry-level SE model won't get the LED headlights, only SEL Premium. The SE also gets cloth seats, V-Tex Leatherette in SEL Premium, and the DC fast charging optional, standard on SEL Premium. Optional on the SEL is the Driver's Assistance Package, which includes: Adaptive Cruise Control, Forward Collision Warning with autonomous braking, Blind Spot Monitor, Rear Cross Traffic Alert, Light Assist, and most noticeably, VW's new Digital Cockpit Display in place of the standard gauge package. 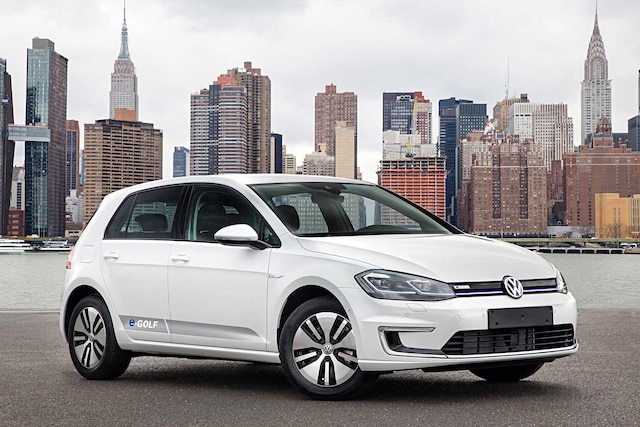 I've been a fan of the e-Golf from the beginning, even with a somewhat limited range. For people in the L.A. area, the range just didn't seem completely usable. The extended range makes it a real possibility for drivers who don't have chargers at work. The driving experience, while not a GTI, is still very rewarding. The e-Golf is remarkably quiet inside, especially so given the fact that the sound of the gas engine usually covers up things like road and wind noise. With driver selectable regeneration levels, driving the e-Golf in traffic is a mostly one-pedal affair. Using regeneration instead of the disc brakes means you're recuperating a decent amount of energy you used to accelerate the car up to speed. Speaking of the brakes, the pedal actuation feels completely natural. If I could make the charging situation work, I'd be signing a lease on one of these instead of sitting here writing this.

A few weeks after driving the e-Golf, I flew to Europe for Worthersee GTI Treffen. I flew into Munich, which gave me the chance to drive a few different examples not only to and from the show in Austria, but also around the roads winding around the Austrian Lake. I took off on the initial 400km drive in a GTI configured closest to a North American SE, a loaded car from a tech standpoint, but no sunroof and Clark Plaid cloth interior. In the States, we will get three stages of GTI: S, SE, and Autobahn. All models get LED DRLs, foglights, and taillights; SE and Autobahn add LED headlights. All DSG-equipped cars receive start/stop and automatic headlights with rain sensing. SE models get the VAQ limited-slip differential, 8-inch Composition Media Screen, Blind Spot Monitoring, Rear Traffic Alert, Front Crash Assist, KESSY, and optional leather and sunroof. Autobahn adds navigation, active damping, climatronic, and 12-way power driver seat. 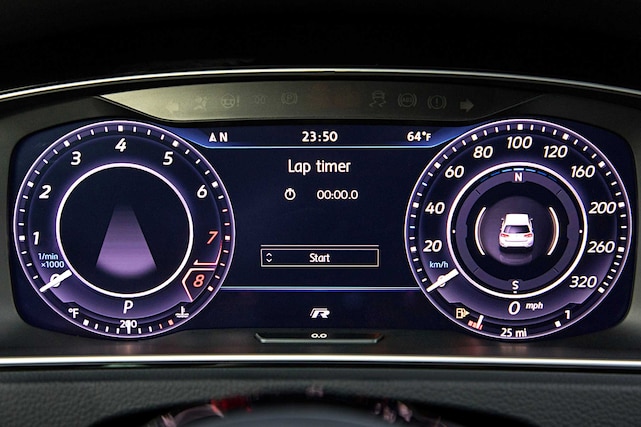 Like the e-Golf, the rest of the family gets new fenders, bumpers, and lights as exterior updates. Inside, the new Composition Media Screens replace the older system with a completely glass screen, which gives the interior a far more modern feel. The Golf R is the only member of the Golf family besides e-Golf that receives Digital Cockpit.

Leaving the Munich airport, there isn't a noticeable difference between the MK7 and 7.5 in driving experience. All GTIs are 220 hp at this point, and unless you drive them back to back, it's hard to tell the difference. The Composition Media Screen is a huge improvement in terms infotainment interaction; it has gone from a car stereo to a piece of electronics. The driver assistance functions like Blind Spot Assist and Adaptive Cruise Control are a big step forward from my own 2015 MK7 GTI, which had none of those features. 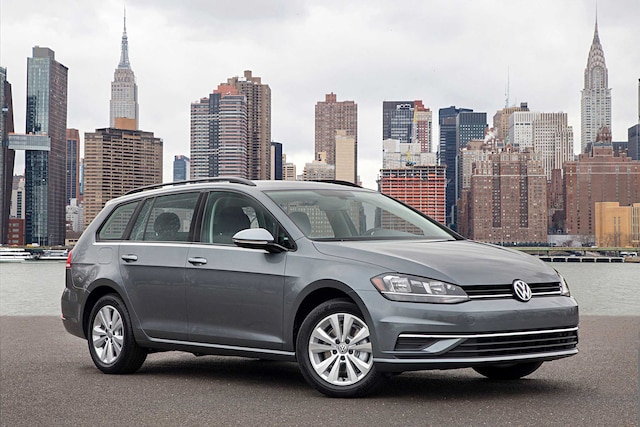 Once in Austria, I spent some time in a version of the Golf that I hope makes its way to our shores. The GTE is a performance plug-in hybrid with all the performance attributes of a GTI. Torque from the 101hp electric motor is instantaneous, returning throttle response you'd expect from a naturally aspirated engine. It can be driven 31 miles on pure electric power, if you are so inclined. The 1.4L gas engine provides an additional 148 hp, the peaks don't arrive at the same time, meaning total horsepower is 201, and total torque is 258 lb-ft. A comparably equipped GTE is roughly 250 pounds heavier than a GTI, but keep in mind, the majority of that extra weight is either down low, in the rear of the car, or both. Silently gliding along in town on pure electric was a real pleasure, but firing up the engine on the back roads returned a drive nearly identical to a GTI. If you live in an area with cheap and clean electricity, then this would make far more sense to most drivers.

After the show, I had to choose a car for the return drive to Munich and had to leave at 4 a.m. to make my early flight. There weren't any Golf Rs available, and I found myself in another North American Unicorn, the GTD. While I have some hope that we will see a GTE one day, I don't think the diesel GTD has any chance. While the plug-in hybrid does feel significantly different than the standard GTI, the diesel is the same car, just not requiring the engine to be revved much over 4,500 rpm. Once you get past the more relaxed engine, it feels the same and gave me an opportunity to really experience the MK7.5 chassis on some open Autobahn. 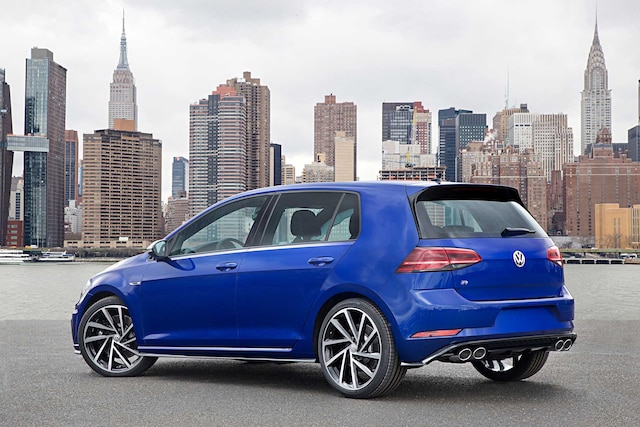 If you've never driven in Austria, you might mistake the scenery for Germany; the speed limits, however, you will not. It is quite common for Austrian highways to be restricted to 100 or even 80 kph. Not only are limits low, photo radar is everywhere; I use the cruise control because it keeps wanting to creep up in speed. Roughly halfway through my drive, I cross over into Germany. At this early hour, the Autobahns are empty and it doesn't take long before I find unrestricted sections. I immediately get the GTD up to an indicated 220 kph just a little short of the car's electronically limited top speed. The car feels stable, but the engine is grumbling a little. The wind noise is a bit roar-y, and it feels like I'm pushing. The car really settles in between 180 and 190 kph, which is about 115 mph. At that speed, it plants itself nicely, the engine and wind noise subside, and it is perfectly relaxed cruising. This is where the MK7.5 really shows an improvement over the MK7; it seems like the new body panels have made a difference in aerodynamics. Perhaps a few lessons were learned from the GTI Clubsport's aero package. 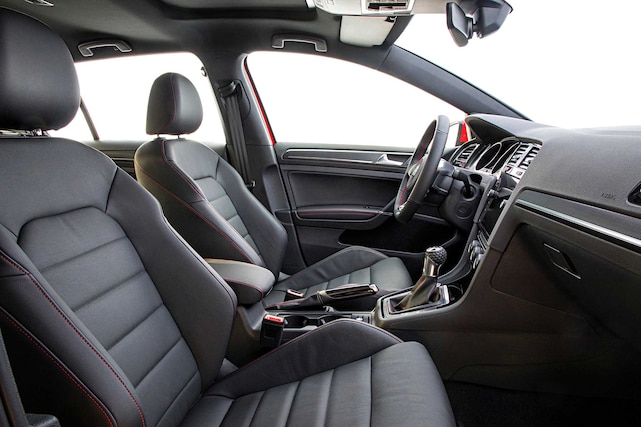 The MK7.5 should start hitting dealerships this fall. I don't expect to see major differences in pricing, although changes in packaging will show some changes between 2017 and 2018 models. I've already heard some squeals of glee from VW fans about the LED lights; I've never been a light snob, but I will admit, the new headlights work very well at night. The Composition Media Screen looks great, and who can argue with more safety equipment? Is any of this enough to make me consider trading in my 2015 on a 2018? Probably not. But if you don't already have a MK7, the refresh will make any of the Golf family even that much more attractive. 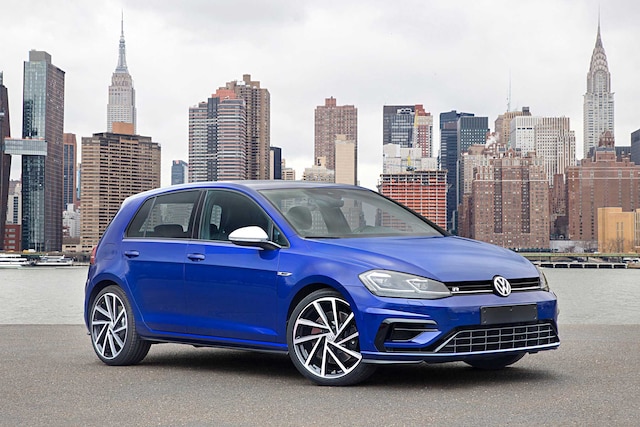 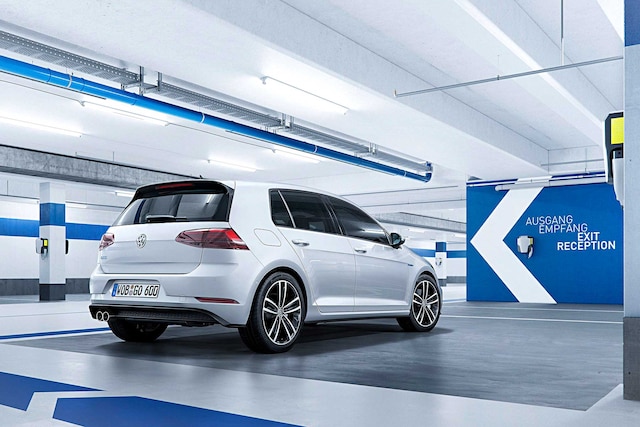 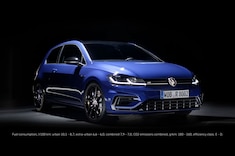 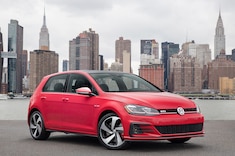