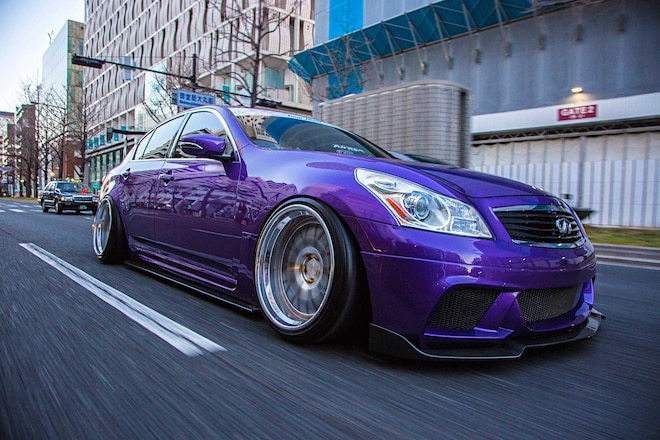 Mao Nakai had his first taste of modified cars in high school. As the seniors got their licenses, he watched them show up to school in a variety of cars. One that especially stood out to him was an FD RX-7, owned by his friend who was only a couple years older. The car was low and had aggressive aero—a huge visual impact, but what really left an impression on Mao was the sound. The un-muffled turbo rotary sound stirred something inside of him, something he didn't yet fully understand, but he knew then that he was hooked. Mao would often ask his friends to take him along when they went up to the mountains so he could experience the movement of the car, the exhilarating speed, and the sound from within. When he was finally eligible to drive, he bought the sportiest car he could afford, an AE111 Trueno. By no means was it the fastest thing around, but the 20-valve 4A-GE had a distinct sound, plus the little Toyota was light enough to have lots of fun in. For a year and a half, his car remained lightly modified with coilovers, wheels, tires, and most importantly, a straight pipe exhaust, until it was T-boned at an intersection by someone who ran a red light. The insurance company paid Mao out well, and once combined with the money he'd saved up prior, he decided to pick up an R32 Skyline GTS-t Type M sedan. The R32 was built for drift, something he couldn't do with his last car, though he would still go up into the mountains; however, now he could tear up the legendary industrial districts of Osaka in his Skyline. Two years passed and Mao submitted an application to a local Nissan dealership for a sales position. If hired, it would be his first "real job." Wouldn't you know it, the 21-year-old was hired on the spot.

Now, the funny thing about this dealership is that it required every salesman to own a late-model Nissan. There was also a rule about modified vehicles in that employees were not allowed to own one, as it was deemed illegal and could be a PR nightmare. Mao understood the situation and didn't want to give up this opportunity to start a career at Nissan, so he sold his beloved R32 and picked up the newly introduced V36 Skyline at the time (known as the Infiniti G37 here). 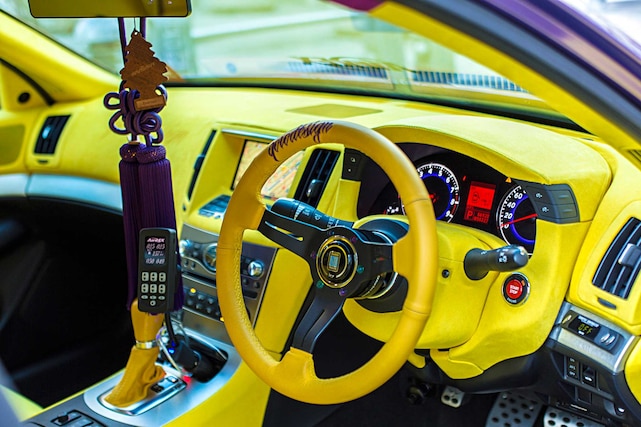 At first, driving a brand-new Skyline at such a young age was exciting. His friends were impressed that he was able to afford such a nice car, and girls definitely took notice. He was doing well at the dealership, but the itch to make the Skyline more than just a basic mode of transportation continued to grow within Mao. He waited a year before asking management if he could simply lower the car on aftermarket wheels. Management explained it was a longstanding policy, and they were looking to appeal to a mature market; a modified car of any sort would go against their image. The dealership had treated him well, and the stability of a well-paying job was definitely something he didn't take for granted; however, he went home, thought about his future, and the following week Mao put in his two-week notice. He had already ordered a set of coilovers in the meantime.

Finding a new place of employment was surprisingly easy, and Mao landed a job at a factory manufacturing parts for trains—it wasn't nearly as flashy as his previous job, but he was happy to hang up his business suit and don a pair of coveralls if it meant he could finally start working on cars again. He threw on the coilovers, picked up a set of wheels, and started looking into exhausts. Every car he had owned up until his current Skyline had been equipped with a straight pipe. This time around, he didn't want just a loud exhaust but a particular sound. T-Welding, local to Mao in Osaka, only accepted work by referral and the company's usual clientele consisted primarily of exotic cars. As luck would have it, a friend of Mao's had recently taken a car there for a custom exhaust and offered to introduce him. The rest is history, and the guys at T-Welding collaborated with Mao to get the exact look and sound he was after. 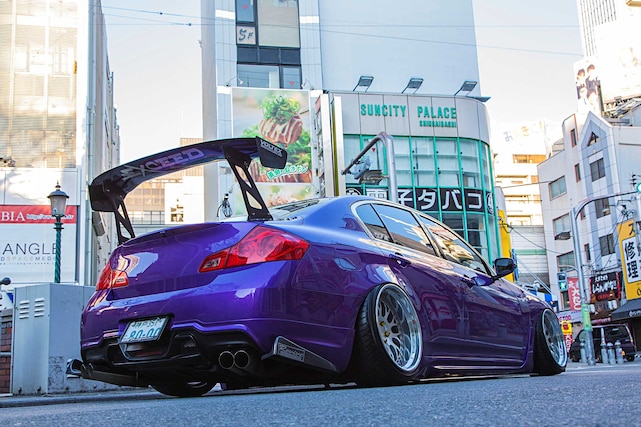 Now that he had the perfect exhaust tone, Mao turned to Exceed Japan to fit the wheels, which used every bit of possible space on the inside, coming to within millimeters of the suspension. When initially test-fitted, it was found that the wheels stuck past the fenders by 4 inches. Exceed cut and worked the sheetmetal and tubs until the wheels fit, raising the arches 1 1/2 inches in the process. When the metalwork was done, the entire car was smoothed out, resprayed in this custom purple, and the interior re-done in yellow suede. Mao is quick to point out that the "Lakers theme" was not intentional, but that he doesn't mind people asking him about it.

In Japan, VIP cars have a very well-established style that is rarely strayed from. The same can be said of circuit-prepped cars built for the sole purpose of function. Mao forged his own path by being able to combine two styles to create a car that doesn't conform to any set guidelines and certainly doesn't conform to his former employer's modified car policy. It's impossible to say which direction Mao and his Skyline will be headed next as his car continuously evolves, but we can be sure it will be unexpected. 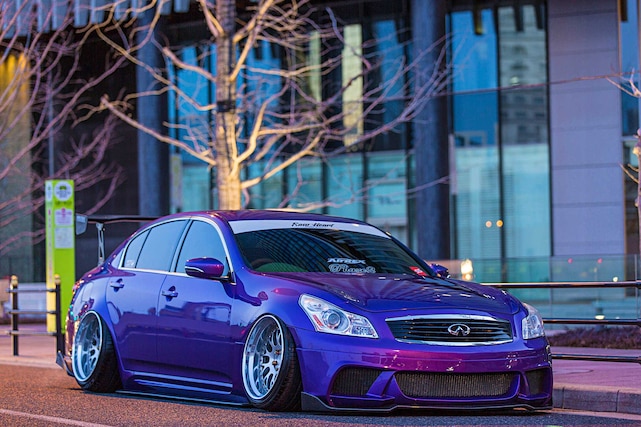 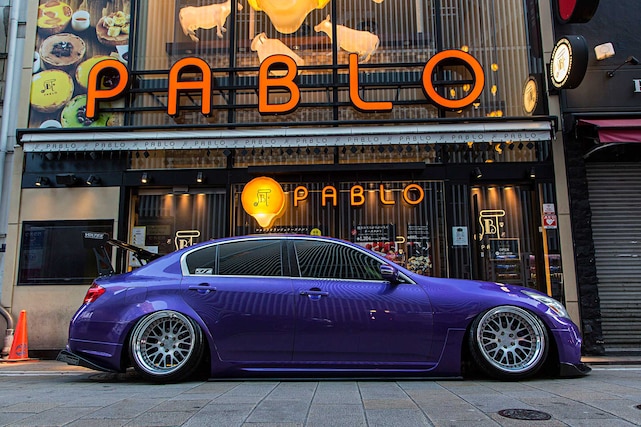 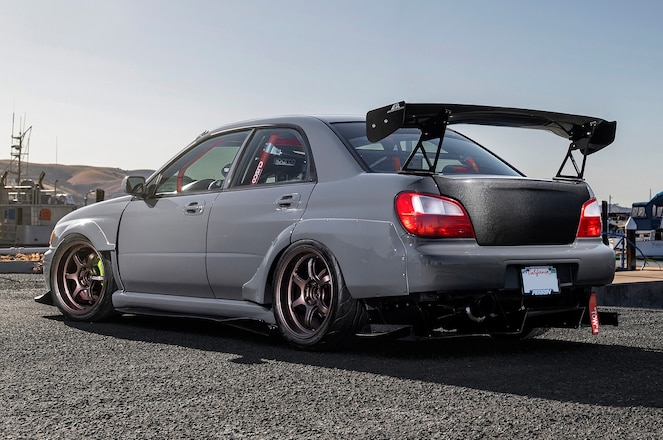 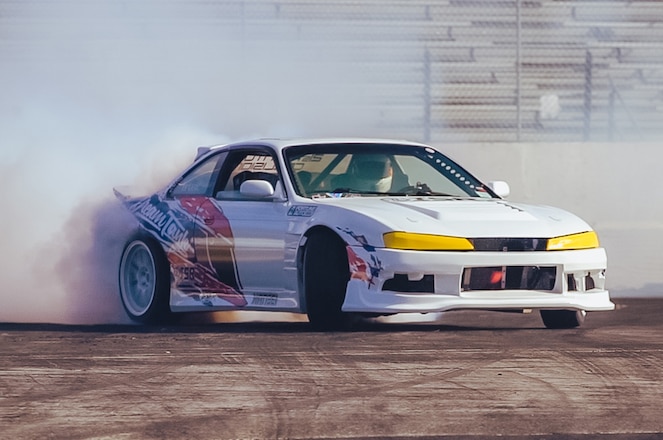 SuperStreetOnline
Your First Complete Look at the 2022 Honda Civic
Late last year, Honda dropped an 11th generation Civic sedan prototype on the world, and, in typical modern day automotive culture, it scribbled a fairly bold line in the sand. On one side was a group that welcomed the more mature design direction applied to the 4-door in comparison to the 10th generation’s slicey and
Rodrez – Apr 29, 2021 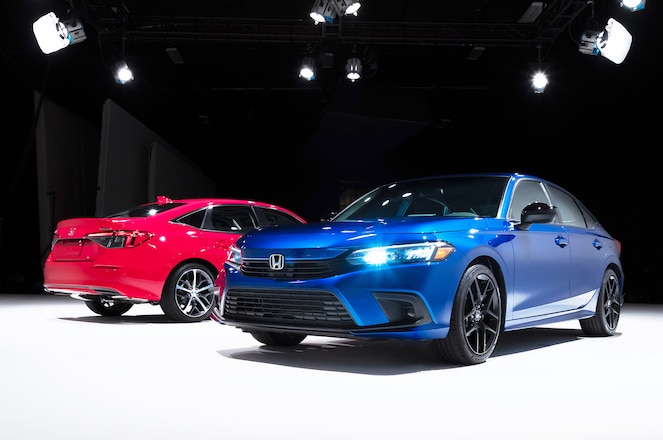