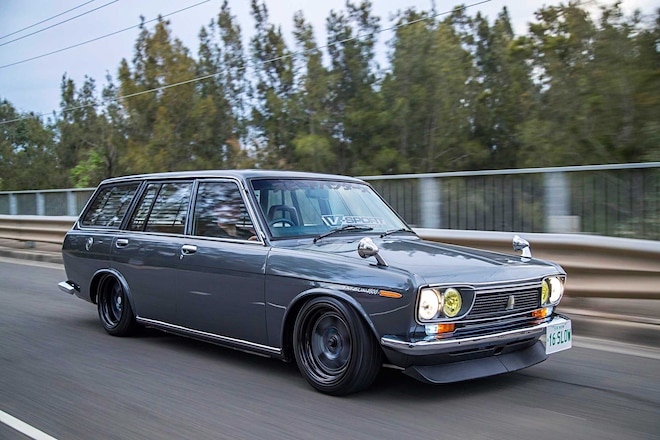 As vital in Datsun's global history as it has been a staple of the enthusiast scene for almost 50 years, the Datsun 510 is one of those cars that almost anyone with a taste for retro Japanese metal would save a spot in their lotto-win garage for. And, with numbers declining, it's probably never had more of a talent for stopping you in your tracks, especially when it's this good. 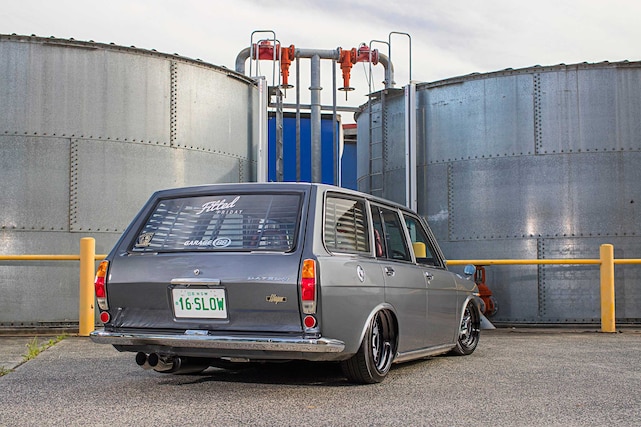 Three years in the making, John Healey's wagon might just be the perfect package. A build that grabs your attention, not because of bright colors or a turbo the size of a human head peering out of a hood cutout, but because it's the end result of finely tuned attention to detail. Classic design, with just enough new-millennium technology to be enjoyed every day, and it gets even better the closer you look.

"I didn't want to go overboard with it," John explains. "The plan was always to make it neat and tidy, but not so much that I'd be afraid to drive it for fear of it getting damaged. Luckily, I've also got some very talented mates who can help me build it."

Based in Arndell Park, on the outskirts of Sydney, he's also in the right place to make that happen. John's the manager at V-Sport, a supplier of motorsport parts which, with a project on your driveway, can be a dangerous way to end up with not much of your paycheck left at the end of the month. But, even with the parts and talent on hand to help out, this wasn't a straightforward build. 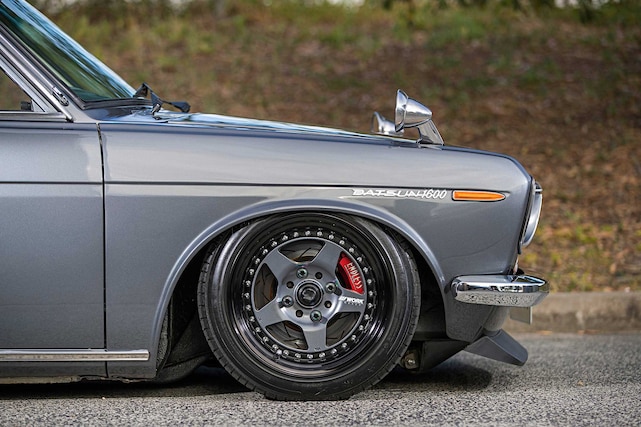 "I'm a big fan of the old stuff, and I've always liked wagons. Plus, I've always had a bit of a Datsun problem. This is my second 510 wagon. I'd built one with a CA18DET up front, which was fun, so I knew what I was getting into." That included finding a starting point. Australia only got the 510 as a sedan or wagon and, while the load-haulers mostly escaped the motorsport scene that finished off the sedans, these were cars bought to work hard, and survivors are just as hard to come by. So this was a lucky find; a '71 1600 (1600 is the Australian name for 510), bought as a non-runner having sat idle for a few years, a shell free from unpleasant surprises even after it had been stripped and sandblasted to make sure. 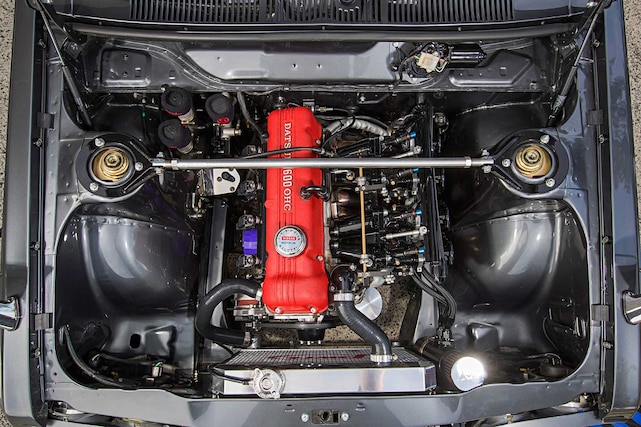 Not surprisingly, the end result had been carefully planned, including stance that John realized would only be usable if the car was on air ride. Only, there's no ready-made kit for a 510 and, while the sedan got a pseudo-independent rear suspension setup, the wagon made do with a utilitarian leaf-spring live axle designed for carrying heavier loads. Getting this low wasn't just a case of wheel and tire fitment; it meant swapping to a four-link rear end and custom 280ZX-based struts to get the universal Air Lift kit to fit.

John admits it was one of the biggest jobs on the car: "Sorting the suspension was tricky. I'd never bagged a car before, and nothing was available off the shelf, so it was a challenge to get it right. It could potentially go even lower, but I didn't want to cut it up. The body is factory, other than clearance for the tailshaft under the rear seat and the fenders, which are rolled for the wheels."

There are no off-the-shelf parts here, either. The Work CR01s had to be re-lipped to get the offset perfect, and in turn, that offered up an opportunity to have them color-coded in the same Glasurit Nissan Grey from the R35 GT-R as the rest of the bodywork before wrapping them in staggered-fitment tires. Effort that's paid off when the Accuair eLevel management has it set to its lowest ride height—it's a hard setup to argue with. And, as John opens the driver's door, I'm realizing that's far from its only talent. 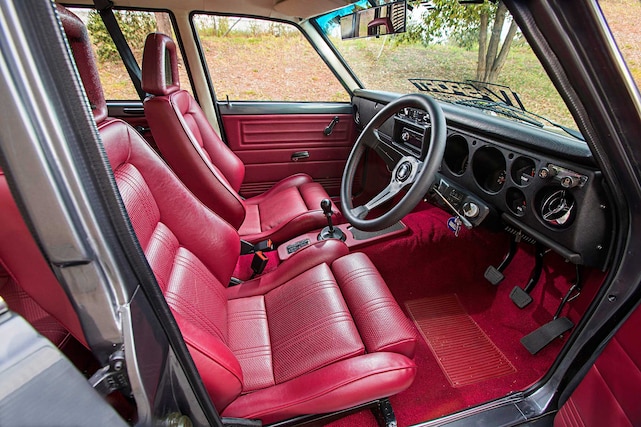 If anything, he's kept the best part for himself. Wedged into the Recaro fishnet sets, trimmed in leather colored in the same maroon Datsun used at the factory and matched to fresh carpets, it's as plush as any luxury car in here, and yet somehow period correct with its Nardi wheel and deep-set SSS-spec gauge panel. Details count, and there's a lot to take in, even beyond the smell of fresh high-class leather. 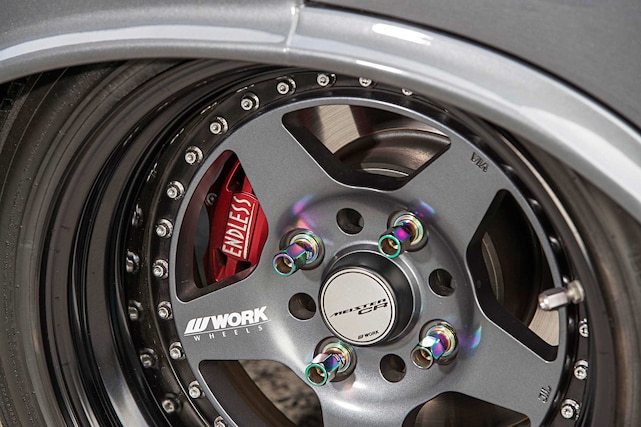 "Dave at King Trim did the interior work, and he's done an outstanding job of keeping it looking original but with that quality as well. Then my mate Greg custom-built an audio install for it, including the panels in the cargo area and the eLevel controller built into the center console."

And the Venetian blinds in the back? John laughs: "Those are interesting—in Australia they're easy to find, as there's a company that still makes them. But I've had a lot of interest from other countries, especially the States, from people who want them. They're hard to come by elsewhere."

The license plate is a clue, but high performance had never been a priority. Instead, it's built for modern car driveability and to cruise at highway speeds—an SSS-spec 1.8L L18 engine, rebuilt with forged pistons, slightly oversized valves, and a JE cam. Quad throttle bodies and electronic fuel injection, with coil-on-plug ignition, both controlled by an Emtron ECU, take the power up to around 110 bhp. Switching to an SR20-spec gearbox brought in a fifth gear for cruising, paired with an R31 Skyline diff. And, with V-Sport supplying Endless brakes, it would've been rude not to try out a four-piston caliper upgrade and bigger discs on his own car. An easy, usable, all-rounder. 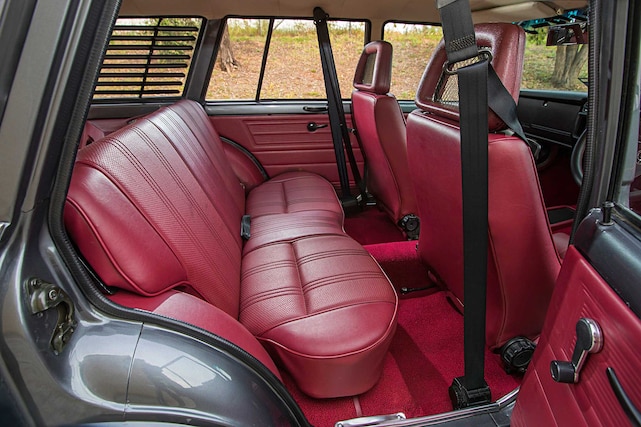 "I use it whenever I can—the idea was never to be afraid to drive it. I wanted a cruiser and it does that really well. The build took a long time, but I'm really happy with how it's ended up."

No surprises there. Datsun's first global car may be a staple of the scene, but John's eye for detail and clever use of modern technology shows there's still a fresh way to make it your own. 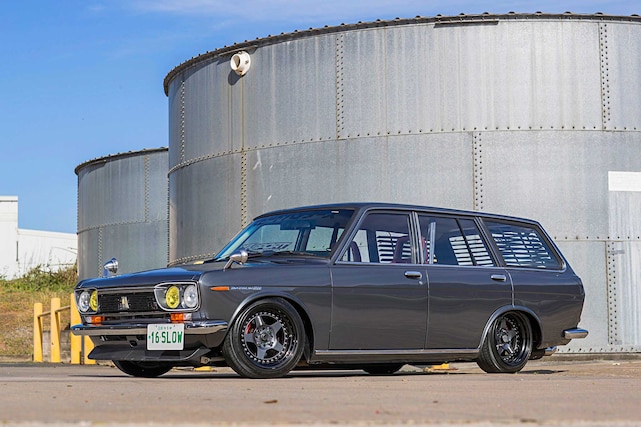 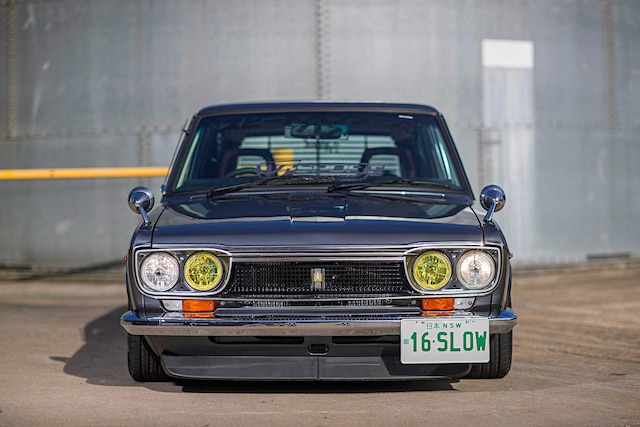