A hatchback hiding in plain sight 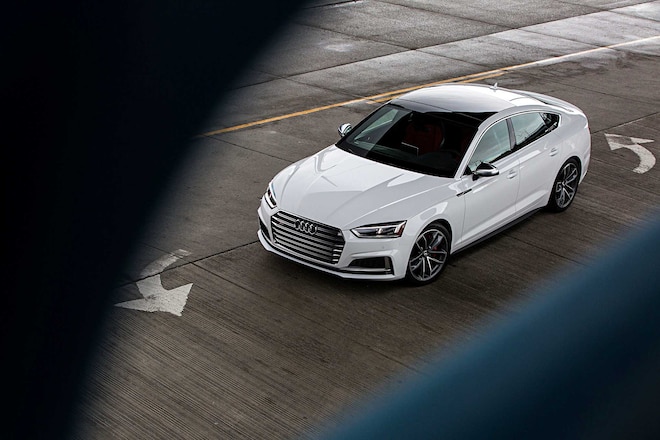 Ask any automobile manufacturer about the future possibility of a wagon or hatchback in its U.S. lineup and it will tell you, without hesitation, that Americans don't buy them. With their econobox stigma and mom-mobile ignominy, the stubby rear body style is rare at the mid- and high-end of the market. Audi, however, has been bucking that trend with its slope-backed pseudo-wagons like the A7. On the back of the success of that vehicle, the company is bringing the new 2018 Audi A5 and S5 Sportback to U.S. shores in the hopes that those who don't want a three-box sedan, a giant SUV, or a boxy wagon will fall in love. 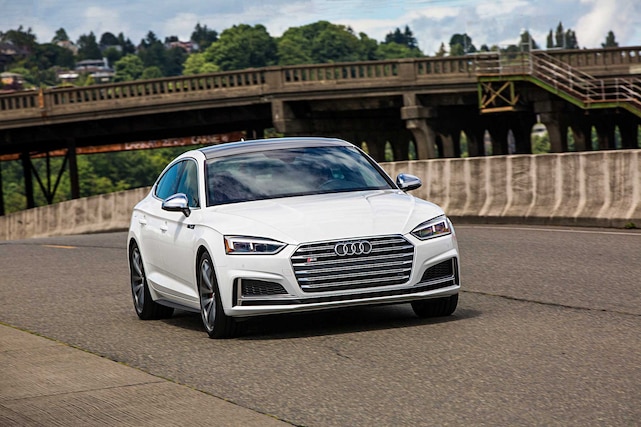 The 2018 Audi A5 Sportback inherits all the visually appealing bits from the A7, in a smaller, lower, and sharper design. Back in 2010 when Audi developed the A7, the company was targeting those who wanted a wagon but didn't want the reputation of a wagon or hatchback hanging over them as they shuttled kids, dogs, and Costco purchases around town. The design trick worked so well that Audi says the sportback design tripled sales and brought new customers into the Audi fold. Sharper creases accentuate the rear haunches of the A5 Sportback while the vehicle sits 1.6 inches lower in overall height than the A4 sedan it's based on. The longer, lower hoodlines and a wider grille underline the A5 Sportback's slightly meaner-looking visage. At the rear, a set of dual exhaust tips on the A5 Sportback and quad tips on the S5 Sportback are set off by low and wide horizontal body lines and low-hung diffuser. Audi argues that the new A5 and S5 Sportback get a "slightly wider" wheel track, but ultimately that comes from wheel size and offset, not a wider body.

Audi Designer Frank Lamberty insisted that the team was not about to "put a backpack on the A4 sedan" to create the A5 Sportback because that would be like wearing socks with sandals—functional but tremendously unattractive. Instead, the team had to stretch the rear fender back and move the doors back to get the rear rake just right. The result is a striking four-door with a huge rear hatch and a full 17 cubic feet of cargo space in the trunk that can be expanded to 46 cubic feet by dropping the back seats. Mind you, it's not as good looking as the A5 coupe, but with all that cargo space, a slight junk-in-the-trunk appearance gives the A5 Sportback a hidden-in-plain-sight functionality in a very well-designed package. 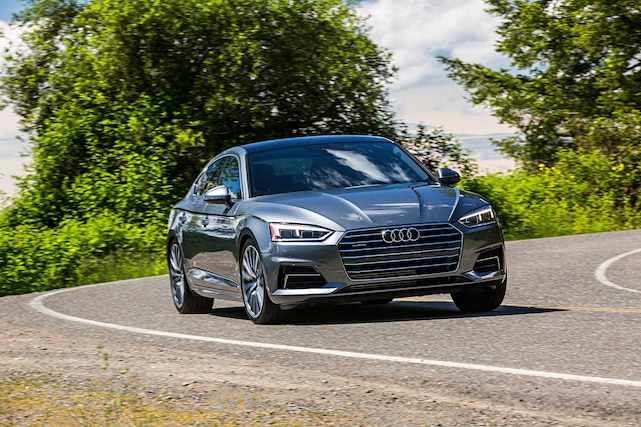 Under the hood, the A5 Sportback is powered by the same engine as the Audi A4. The turbocharged 2.0L, four-cylinder engine is paired with a seven-speed S-tronic dual-clutch automatic transmission producing 252 hp and 273 lb-ft of torque. Audi says the A5 Sportback will do 0 to 60 mph in 5.7 seconds. We took the A5 Sportback on a short speed run on Seattle's highways and were surprised by the power. The engine feels and sounds like it should be a larger, more powerful version than what the numbers suggest, and there's almost no turbo lag when you have to nail it for short merges or one of Seattle's even shorter passing zones. 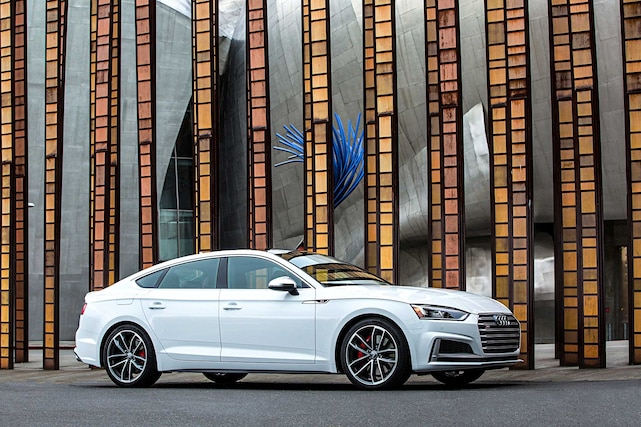 The more powerful S5 Sportback is powered by Audi's 3.0L TFSI V6 that puts out 354 hp and 369 lb-ft of torque, mated to an eight-speed automatic transmission. Audi says the S5 Sportback does the 0-60 sprint in 4.5 seconds. The S5 Sportback made a surprise and welcome appearance at the launch (the team at Audi wasn't sure they'd have models available for the drive), and we got to spend some time with it on the roads to up to Snoqualmie Falls. While it's certainly more powerful, the throttle is a bit aggressive on tip-in and tends to be all or nothing. We found this to be true in every mode from Dynamic to Auto, and it took a bit of getting used to. Press the pedal to the floor and you expect an immediate, powerful response. Instead, turbo lag takes over, which, in cases when you are passing multiple vehicles in one swoop on a two-lane road, makes for moments of concern. Sure, you can put the Sportback into manual mode and use paddle shifters to slap your way through the gears, but even this didn't make the lag disappear. 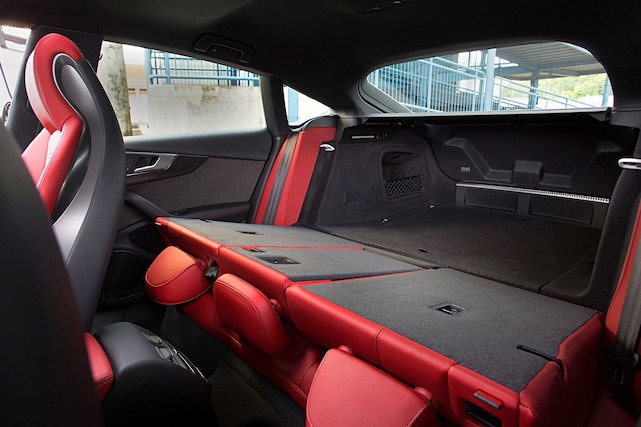 Both the A5 and the S5 Sportback come standard with Audi's Quattro all-wheel-drive system and a self-locking center differential. On the Sportback, the system is slightly rear-wheel biased with a 40:60 ratio, which can be varied front to rear based on traction. The front five-link suspension system has been redesigned for the Sportback, and in the basic A5 without the adaptive damping suspension, it's solid and comfortable without being stiff or abusive. Add the adaptive damping to either the A5 Sportback or the S5 and you can dial-in how you want the car to feel over the bumps. In Dynamic mode, the suspension tightens up and translates more of the road feel into the cabin but isn't so stiff that you feel like you're being kicked in the kidneys. In Auto and Comfort, the ride is smooth, compliant, and great for highway cruising. Without the adaptive damping system, the A5 Sportback is comfortable without being cushy and responsive without being rough.

Inside both versions of the Audi A5 and S5 Sportback, passengers and driver get plenty of interior space. Both front and rear passengers get more legroom. Rear passengers, however, benefit the most with an additional 2.4 inches of legroom over the A5. But the rake of the roof toward the rear makes it a bit tricky to get in without knocking your head. Once settled, the back of the A5 Sportback is downright luxurious. Add tech features like the gorgeous and easy-to-use Virtual Cockpit as well as Audi's suite of near-self-driving capabilities and safety features and you have a very well-appointed wagon-ish vehicle. 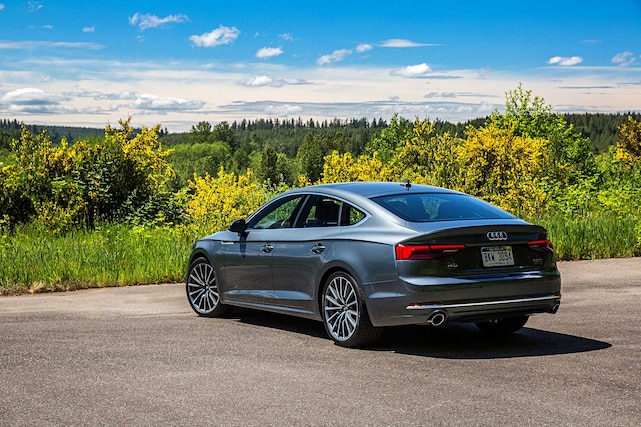 The base A5 Sportback starts at $42,600, not including the $975 destination charge. The S5 Sportback starts at $54,400, plus destination. Add specialty colors, various packages like the Prestige, S Sport (which gives you the red brake calipers and dynamic suspension), Technology packages, and upgraded dynamic steering, and pricing for the Sportback can climb to more than $68,000. While that is a lot of scratch for an almost-wagon, the A5 and S5 Sportback offer a perfect balance of functionality and good-looking form. As Americans grow tired of their SUVs and look for options that aren't wagons or three-box sedans, the well-designed A5 Sportback will hit all the right buttons. This is a wagon hidden in plain sight. Just don't tell the neighbors. 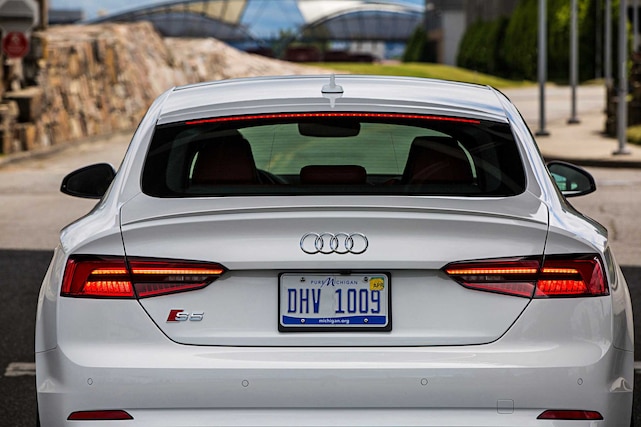 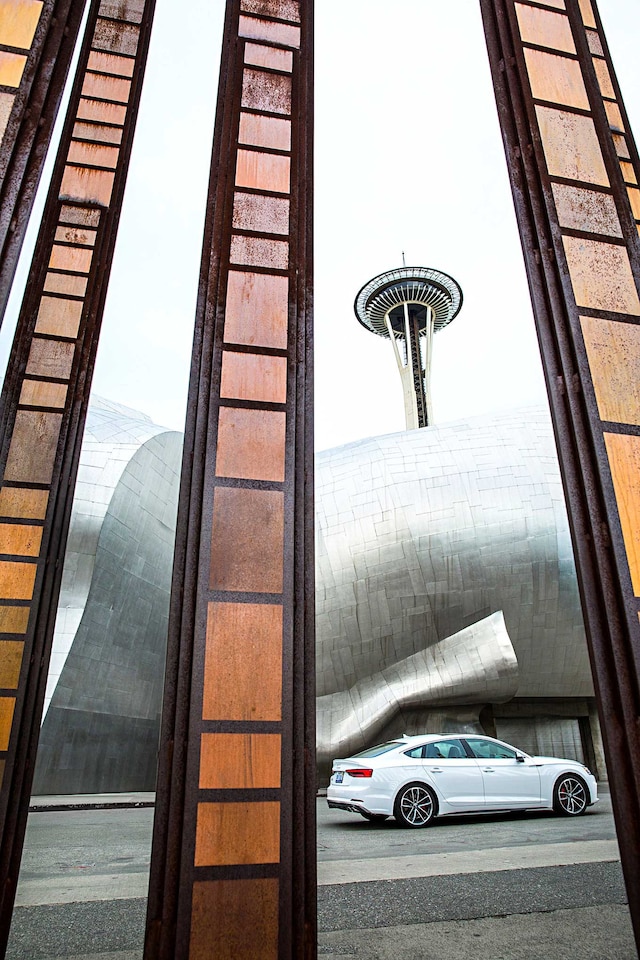 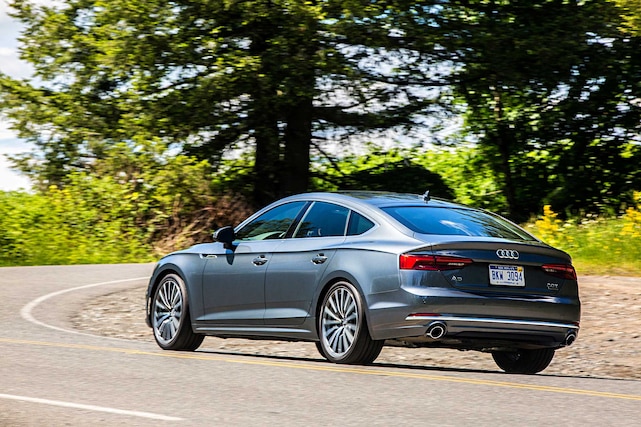 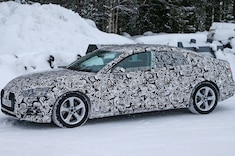 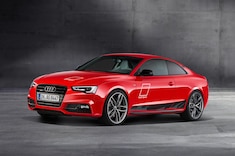 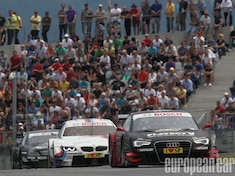 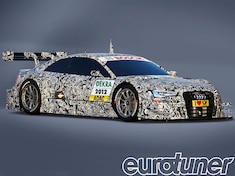 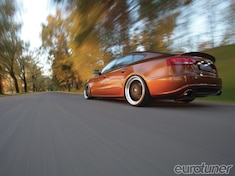 The European 2010 Audi A5 Sportback 3.0 TDI Quattro certainly cuts the mustard if you need a sensible daily driver with a dash of panache. Jukka Nieminen bought the Sportback for that exact reason, but once you know how to improve a car, its difficult to leave it stock. - Eurotuner Magazine