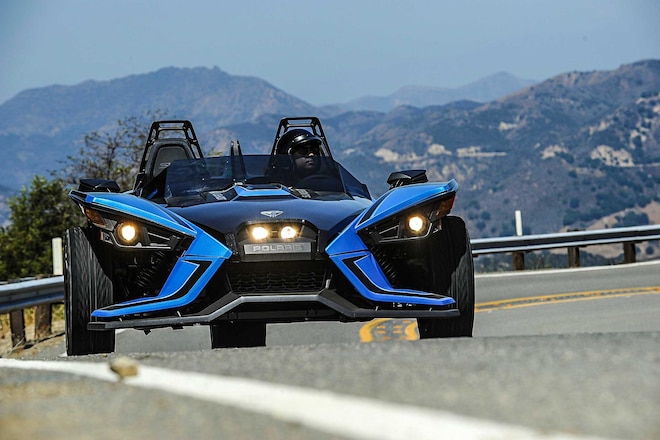 You might have heard the name, but more than likely you haven't driven something they've built unless you're a powersports guy. Polaris has been around since the '50s and they're known for things like ATVs, Side-by-Sides, motorcycles and military-spec UTVs. Perhaps their biggest claim to fame though was the idea of a snowmobile — some-60 years ago. Everyone knows what that is, right? Well, the half sled, half motorcycle kind of caught on and today Polaris is knocking on our doors again with something innovative that driving enthusiasts and thrill seekers like you and I can also enjoy. Meet the Slingshot. 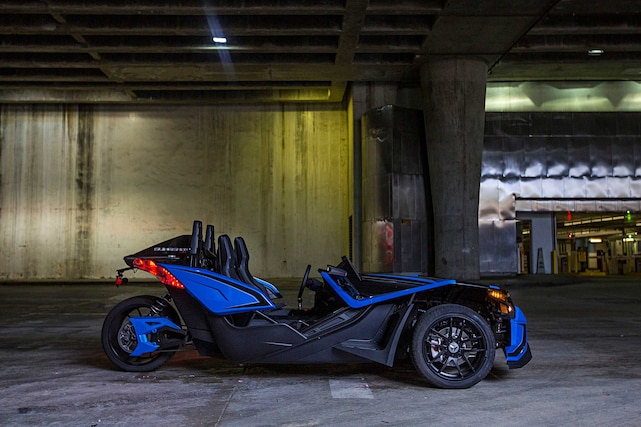 What is the Slingshot

Okay, so you're thinking to yourself the three-wheeled Slingshot is nothing new, and you're absolutely right. They've been on the road since '14, but what you probably don't know is that by the end of ’17, 40 states will classify it as an autocycle, which means you simply need a valid driver’s license to get behind the wheel. Nine states still consider it a motorcycle; however Polaris is lobbying hard to change that. And in the 50th state of Hawaii, the Slingshot will be deemed street legal in early ’18. We should also note that in whatever state you are, the Slingshot follows your local motorcycle helmet laws. 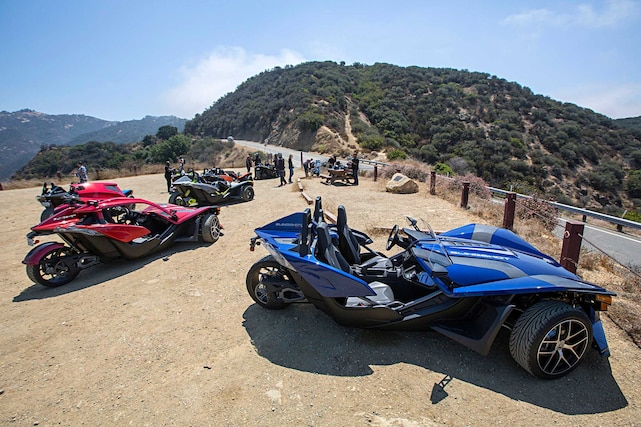 So now that you know it's legit on the road, the next juicy bit you need to know about is how it all works. Under the hood is a 2.4-liter DOHC four-cylinder GM engine (similar to what's used in a Chevy Malibu) that's good for 173hp and 166 lb-ft of torque. It transfers power to the rear wheel via a carbon-fiber reinforced belt, and you control the tranny via a five-speed manual gearbox (no automatics available, yet). Anyone will know that's not a lot of power, but let's remember you don't have 50 percent of what makes a car to weigh you down. A 1,749 lbs. curb weight indicates a favorable power-to-weight ratio, not as hell bent as a 1,000cc motorcycle, but more than likely better than your 240SX or Miata at home.

How Does It Ride Drive

I had no idea what to expect, and to be honest I was a little scared when I got behind the wheel because I'm not a motorcycle guy and I wasn't quite sure how close it would resemble being on two wheels. But once I left the parking lot, piloting the Slingshot was as easy as hopping into a go-kart or Side-by-Side for the first time, but a tad heavier. Its small size and light weight make you want to throw it around every corner. The acceleration and gear shifts are solid, effortless, and beg for canyon roads. I put it through some heavy abuse around the back roads of Malibu Canyon and had an absolute blast. If you're a major driving critic, there are flaws like its slightly uncomfortable steering wheel, lack of initial braking, and the top end dies off at higher speeds. But honestly, I wasn't really worried about any of that because I was soaking in the open air element of the Slingshot, feeling the wind, hearing the engine noise, and taking of the advantage of the fact that you're so close to the ground and able to hug every corner. 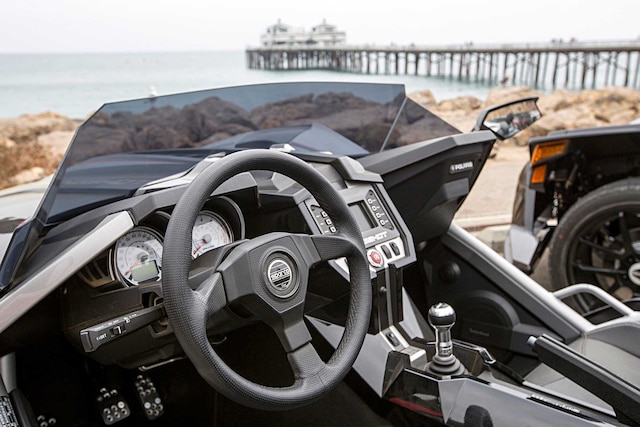 There are four trim levels offered for the Slingshot starting in the '18 model year. The features and options range from wider 305-series tires to Sparco seats and accessories, turn-by-turn navigation, rear-view camera, hardtop, 10-way adjustable Bilstein shocks and a 200-watt Rockford Fosgate stereo. You can price a new Slingshot all the way up to $31K for the SLR Limited Edition model, but the one that's the best bang for the buck is the baseline S model. Here, you get a Slingshot that retains the same powertrain as the top-of-the-line model for a more sticker-friendly $20K. Sure it won't have all the bells and whistles, but we discovered there's a huge aftermarket available that includes upgraded suspension and even turbo and supercharger kits.

Would We Buy One

That is the question... The haters will tell you it's not fast enough and it looks weird. Slingshots also do get a slightly bad rep with people turning them into extras for Lil Wayne music videos (I.E. chrome wheels, neon lights and obnoxious stereos). But... if it's fun and something new you seek, that won't break the piggy bank, the Slingshot could be your cup of tea. It doesn't matter if you're a motorcycle guy, JDM guy, V8 guy or truck guy, the Slingshot is a whole new ballgame, and who knows, maybe it'll be like the snowmobile 50 years from now. You never know. Well, Polaris might... 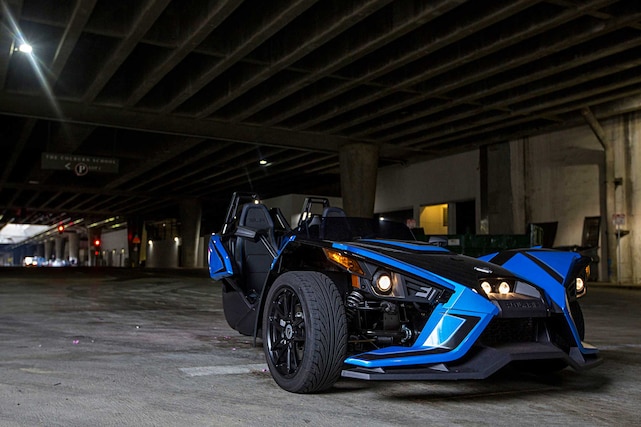 Don't Judge A Book By Its Cover
Jofel's Take

As a motorcycle and car enthusiast, the Slingshot is surely one of the most interesting vehicles I've driven this year. The "autocycle" probably turned more heads than when we're driving our project C-HR and "Ratchet Bunny" Scion FR-S combined. If you want an attention getter, it looks really great on the outside, but for me, that's all it has going for it. It has exotic car looks but zero exotic car personality. I'm not just talking about lack of power either. A Miata isn't packing many ponies, but it's still exhilarating to drive. If you're not used to climbing over rollcages or swinging your leg to over a motorcycle then you might find it difficult to get into the Slingshot and since there isn't a B-pillar, you'll have to get used to the center-mounted seatbelts. 0-60mph isn't impressive and you'll need to put in some extra effort to make the Slingshot come to a complete stop. I can't imagine myself taking the Polaris on a long trip. Maybe it was just me but the ride is rather harsh and gets pretty hot inside the cockpit. Essentially you'll be spending 20 grand on something that will only impress people who pass you by.

I can't say that there's a new car out there under 20k that's worth buying and the Polaris isn't a great alternative option either. It's sort of like having that extra training wheel on your first bike. You kind of look like a noob that can't handle two wheels. You might as well get a motorcycle with the speed and gas efficiency. If I wanted to look like a badass, I'd take a Ducati 959 Panigale or an MV Augusta F4.